What Happened in Central Falls?

Floridalma and Freddy still aren’t sure how they got sick.

“Fui al mercado, al Stop and Shop,” Floridalma says, but otherwise she didn’t leave the house. By late March, the kids were home from school and she was no longer babysitting friends’ children for money. Her neighborhood church was closed. Fredy was reporting to work, though, cleaning a local grocery chain and other stores for labor contractors in morning and evening shifts.

Their COVID symptoms appeared at the start of April: cough, fever, flu-like symptoms. Temperatures of 105. Hair loss. Fredy developed a rash on his feet. Floridalma passed out in the shower.

Floridalma is a patient at Blackstone Valley Community Health Center on Broad Street, so she got in for a test right away. Fredy isn’t, so he waited until a testing site opened on nearby Dexter Street to confirm his diagnosis. Both were instructed to isolate in their apartment for at least two weeks, away from the world and from their three kids.

Due to their immigration status, Floridalma and Fredy and their children were ineligible for economic stimulus. Fredy would not receive sick pay from his employers or temporary disability insurance while he was out with COVID-19. They had no income, no savings. The sickness, which ravaged their lungs and would linger in their bodies for months, was the least of their problems.

It was “lo peor que ha pasado,” — the worst thing that ever happened, Floridalma says. A nightmare.

Around the same time, Floridalma’s brother was admitted to the intensive care unit at the Miriam Hospital. Floridalma would cry for him and her coughing would worsen. She was afraid he would die, which forced her to think about what would happen if she died too. She’d sit in her bedroom with Fredy, press Alexis’s nebulizer to her face and think about loss: of family, of food, of home, of breath.

Gracias a dio, she says, her brother was well enough to leave the hospital after about a month. Floridalma and Fredy took care of one other — it was the most time they’d spent together in years, Floridalma says — and the kids learned to do the same. Aylin, the oldest, did much of the cooking for her siblings, including “a fail,” Dulce teases, when she rinsed ground beef for meatballs and they all fell apart. 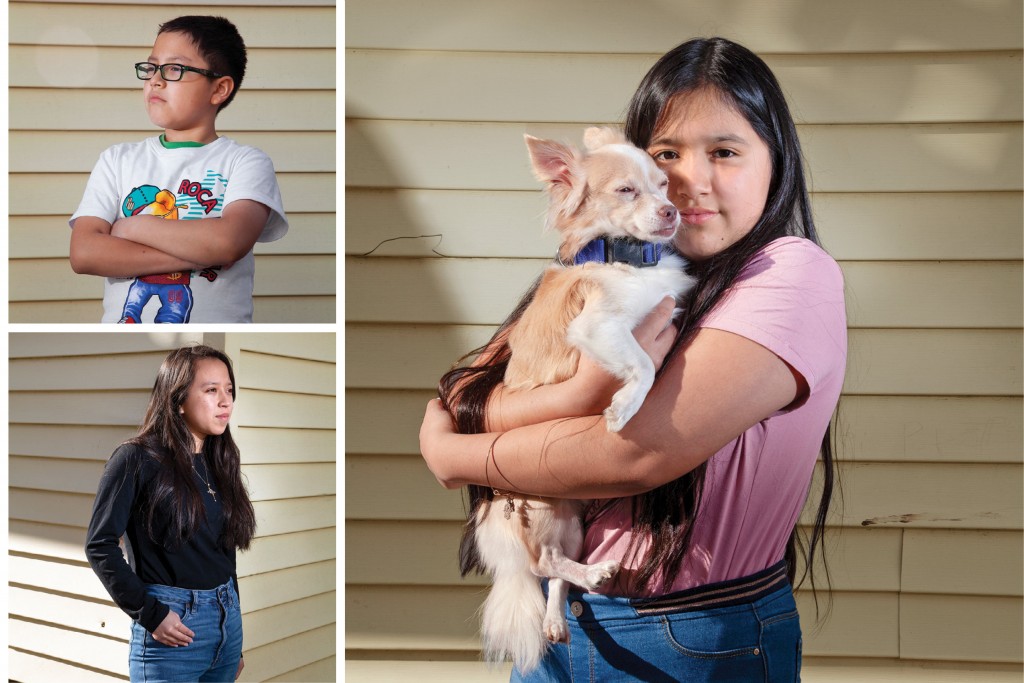 When her parents first got sick, Aylin had only been in the United States a few months. Before that, she lived in Guatemala City with her aunt and grandmother. Her dad moved to the United States for work when she was a toddler and her mom left a few years later, with plans for Aylin to join them without having to cross the border on foot. But as she got older, Aylin resisted the move. When her grandmother died last year, she was forced to come. She was newly enrolled in Central Falls’ English as a second language program when the coronavirus struck.

Aylin was the only sibling to get tested for COVID-19, and she was negative. Aside from a few headaches, they all felt fine. The girls made TikTok videos to pass the time and prepared cinnamon and lime teas for their parents and themselves. Alexis cried because he only likes apple tea. He’s the gringo of the family, Dulce says: hot dogs, hamburgers, mac and cheese. (“And apples,” he adds.)

“But we made him drink it,” Dulce says. “He has asthma. It was our job to make sure he doesn’t get sick.”

Early on in their quarantine, the family noticed someone was leaving groceries on their doorstep — food for their little dog, Baby, too. Someone dropped off clothes for Alexis, whose wardrobe was locked in his parents’ bedroom. Aylin’s teachers helped them get a gift card to buy food. Progreso Latino got word of the family’s situation and began delivering fresh produce from their food pantry. The help continued for nearly a month while Floridalma and Fredy recovered. And then the May rent came due.

As the coronavirus swept through Central Falls in the the spring, City Council president and mayor-elect Maria Rivera was fielding dozens of calls a day from people without food and at risk of going hungry. So she took to Facebook and, over thirty hours, raised $17,000 for gift cards for undocumented families in need — including Floridalma and Fredy’s.

“When I decided to do that, I was upset about the lack of, right?” she says in a phone interview. “It was upsetting that we were the highest-impacted community and we weren’t getting the resources. It’s not that hard. It’s really not that hard. Within three days, we raised these funds and we already knew who these funds were going to.”

In partnership with the nonprofit Welcome Back Center, Rivera’s team distributed gift cards through a list provided by the school district and tracked where each card went and how it was spent. At the same time, the Rhode Island Foundation ran a similar program with fundraising help from Amica, the United Way and private donors to distribute $170,000 in cash assistance for undocumented families. Neither funds lasted long.

Rivera remained frustrated in the lack of support for her community and Latinos across Rhode Island, who make up 16 percent of the state population but represent 43 percent of all COVID-19 cases. In April, Rivera and twenty-one other Latino elected officials — including Secretary of State Nellie M. Gorbea and Mayor Diossa — submitted a letter to Governor Raimondo, House Speaker Nicholas Mattiello and Senate President Dominick Ruggerio that wrote, in part, “It is critical that we take this unprecedented opportunity to evaluate and eliminate the long-standing systemic inequalities that have been brought to light by COVID-19.”

Rivera credits this letter as the driving force for the announcement in June of the WeR1 Fund, a partnership between the state and the Rhode Island Foundation with help from private donors that provides one-time gift cards of $400 to individuals who are ineligible for state or federal aid. But Rivera says funds didn’t become available until mid-July — too late for some, including a family with three children who all tested positive for COVID-19 and, despite the Centers for Disease Control’s eviction moratorium, were forced to leave their apartment after an intimidation campaign by their landlord. Shortly thereafter, the father was picked up by Immigration and Customs Enforcement and was deported. In October, the rest of the family — including two American-born children — joined him in Guatemala.

“These families were desperate,” Rivera says. “It’s still hard for me to understand why it took so long to distribute these funds.”

Dorcas International Institute of Rhode Island was tapped as the administrative fiscal agent to develop and process applications for the WeR1 Fund. Originally, says Dorcas executive director Kathleen Cloutier, applications were slow to roll in.

“You make all these assumptions about who’s out there, but I think what we were finding is the messaging wasn’t as effective as it could have been with assuring people that it’s safe [to apply],” says Cloutier of the program. “This is a group of people that is living in the shadows and isn’t comfort- able coming out of the shadows.”

Cloutier says she’s grateful the state got involved when so many others didn’t. And it’s been a learning process. Her team has been building the airplane while they fly it, she says: adjusting the application so it doesn’t exclude mixed status families and opening up eligibility to adults who share households.

Now, Dorcas is processing about 500 applications a week and its thirteen com- munity partner organizations are distrib- uting the $400 gift cards at a steady clip, she says. The fund surpassed its goal of $3 million, $200,000 of which was raised by private donors.

“I think that says a lot about how every- day Rhode Islanders really do care about their neighbors,” Cloutier says. “I’ve always had that feeling.”