What Happened with COVID-19 in Central Falls? 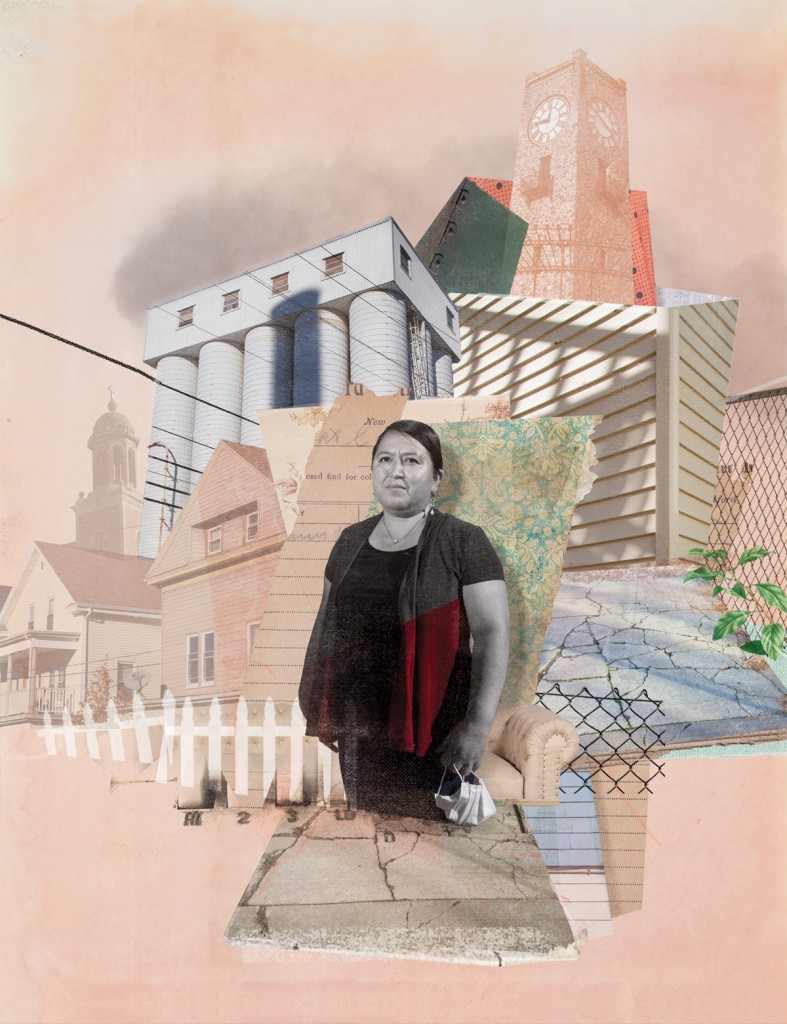 Three past-due bills, $85 each: That’s what Floridalma gets to worry about today. It’s a good thing, a sign of progress. It means her family’s fundamental needs — health, food, shelter — have been met for the moment.

On this day, a wet, warm, transitional one as summer blends to fall, Floridalma and her ten-year-old son, Alexis — clad in green-rimmed eyeglasses and a face mask decorated with trucks — bound down the steps from their first-floor apartment and head to nearby Jenks Park. They pass an oval-shaped patch of dusty earth flanked by three play structures and follow the path toward Cogswell Tower, a stunning century-old monument with four clock faces looming over every corner of Central Falls.

The humidity worsens Floridalma’s already-belabored breathing, but the fatigue — “la fatiga, ay dio,” she says, rubbing her forehead — hasn’t set in for the day. She notices white tents tucked in the back of a packed parking lot at Progreso Latino. The nonprofit agency is hosting another outdoor food pantry, where dozens wait in line to fill reusable bags with free groceries. Floridalma and Alexis join the queue and choose orange juice, milk, rice and some produce. The amount of food they get is less than before, when COVID-19 beset the city and the family first outstretched their hands for help. But it makes sense: Unlike other places hit hard in the early days of the pandemic, the coronavirus never let up in Central Falls. There’s more need now than ever before.

Floridalma and Alexis return home and are greeted by Dulce, eleven, and Aylin, eighteen. The kids are close; until recently, they shared a bedroom. But their uncle just moved out and, yesterday, Alexis shifted to that room. He didn’t get a good night’s rest. He doesn’t like sleeping by himself, and he thought someone was throwing rocks at his window.

“It was probably just twigs from the tree,” Dulce says with a flick of her hand, exasperated.

What scares Alexis most about getting sick is having to be in that room, alone, separated from his family. It’s not a new fear, particularly for American-born children of undocumented parents. But it was made more acute during the weeks Alexis, Dulce and Aylin fended for themselves while the sounds of sickness emanated from their parents’ bedroom.

It’s been months since Floridalma and her husband, Fredy, tested positive for COVID-19. But their family’s recovery has only just begun.

So the saying goes: Heavy is the head that wears the crown. And the burden of the coronavirus, which gets its name from crown-like spikes on its surface, was equally preordained in Central Falls.

The state’s smallest city once occupied a quiet corner in the Smithfield township. But, by the eighteenth century, industrialists saw the potential for power in the Blackstone River’s rapids. They sited their mills along its riverbanks and immigrants eager for work flocked to the area, initiating a massive population boom and Central Falls’s independence. Its ethnic makeup has changed over time — Irish and Scottish, then French Canadian and, now, Latino — but ever since that first damming, it has remained an immigrant-rich nesting doll of density. Here, amid the tenement houses and frenetic main arteries dotted with small businesses, dollar stores and schools, the coronavirus flourished.

“It’s no secret Central Falls has been the hardest hit in Rhode Island. Unfortunately, we’re ranked among the highest per capita in the country,” says city Mayor James Diossa in a Zoom call from his car, his phone tilted up at his face as he drives between appointments.

At press time, 9.5 percent of the Central Falls population has tested positive for COVID-19. The infection rate in the city, which boasts 19,400 residents within 1.2 square miles, is 9,514 per 100,000 people; for comparison, the aptly named Corona neighborhood in Queens, New York, an early pandemic epicenter, has an infection rate of 4,768 per 100,000.

“And so, when looking at that data,” Diossa says, “it’s clear there are many issues that compounded the reason why our infection rate is so high.”

During the stay at home order between March 28 to May 9, Diossa says, much of Central Falls went to work. According to the 2018 American Community Survey sourced via Data USA, 20 percent of working city residents are employed in production occupations — a field many states shut down amid the outbreak but Rhode Island kept running. An additional 5 percent of respondents work in health care support.

The state’s only majority-minority community, Central Falls also has a large undocumented population ineligible for federal aid, state assistance or unemployment benefits. Nearly 33 percent of residents live in poverty. For many, staying at home was never an option, healthy or sick.

Prior to the pandemic, Diossa worked to improve health care access in his city with the help of Dr. Michael Fine, the city’s part-time chief health strategist. The pair met when Fine, who served as the previous director of the Rhode Island Department of Health, conducted a community health assessment for the city.

“We became friends and I was intrigued by his thinking,” says Diossa, adding that their relationship transformed his approach to governance. “It was one of the best decisions I’ve ever made. I couldn’t imagine depending solely on the state because, as you know, on the ground level, the impact [of the virus] was very different. The response was very different.”

In the early days of the outbreak, the mayoral offices in Central Falls and the neighboring city of Pawtucket wrote letters to the state requesting testing infrastructure that addressed the needs of their residents, many of whom don’t have access to transportation and, among the undocumented population, may fear leaving their cities to get tested. Early tests were scheduled by appointment through patients’ doctors — another barrier to care in Central Falls and Pawtucket where, Fine estimates, 50,000 people lack primary care providers.

Fine, for his part, says he was confused by the state’s initial response. From the end of March to the beginning of May, the suburb of Lincoln, which hosted a state-supported rapid testing site in partnership with CVS Health, saw ninety cases of COVID-19. Central Falls had 475.

“In the course of the first six weeks, there was multiple outreach to state government around testing in particular with a very, very slow response,” says Fine. “We had been talking about it before we even heard about four deaths in people’s houses. It seemed like people weren’t thinking about how to prevent that from happening. Now, they have lots of things to think about and I get that. This just seemed to not be on anyone’s agenda.”

In response to a request for comment from the administration of Governor Gina Raimondo, Department of Heath spokesperson Joseph Wendelken wrote, in part, “Rhode Island has made high-density communities, including Central Falls, a priority as soon as we started seeing community-level transmission of COVID-19. We have a whole team dedicated to Central Falls.”

By early April, the cities of Central Falls and Pawtucket began collaborating in earnest to address the pandemic. The night of April 10, Fine says he had a middle-of-the-night epiphany that led to the creation of the BEAT COVID-19 hotline and incident command system. When the hotline went live on April 30, residents of Central Falls or Pawtucket could call in, speak with an intake person, be evaluated by a clinician — a mix of state medical corps volunteers and physicians recruited by Fine — for free, receive isolation instructions and get scheduled for a test at new walk-up sites.

“Isolation is probably the most critical piece to our BEAT COVID initiative,” says State Representative Joshua Giraldo, who ran the incident command system while he served as chief of staff for Mayor Diossa. It isn’t as easy as it sounds, Giraldo says, “when many of our residents are living in cramped triple-decker apartments as I did when I grew up here, and as the mayor did.” About 80 percent of Central Falls residents rent.

According to an early analysis of data, the hotline, which offers assis- tance in English, Spanish, Portuguese and Creole, fielded upwards of 100 calls a day from Central Falls and Pawtucket residents — of whom 28 percent identified as United States citizens and 10 percent identified a family income greater than $25,000.

BEAT COVID clinical volunteers urged callers to eat off paper plates, disinfect shared bathrooms and wear masks inside the home to prevent the spread of disease. Later, Giraldo says, out-of-home isolation became available through the state’s Safe Haven program. But, for many residents, a hotel in Warwick “was a little like going to the other side of the moon,” Fine says.

Many wanted to stay home and, out of work or unable to leave the house due to self-isolation, they needed supports. So the team tapped the school district’s director of enrichment opportunities, Tatiana Baena, to helm a family support program.

“If someone tests positive and they lose their job or need food or access to masks, we are able to connect the residents to resources using a database I created,” says Baena, who initially worked as a volunteer but was later compensated through funds from the state. As demand grew, Baena recruited part-time help from friends and connected with Rhode Island College’s school of social work for interns. Pawtucket’s Collette Travel provided office space for the main BEAT COVID hub as well as technological support.

In early summer, a confluence of events — most poignantly when the Lincoln test site was shuttered and the hotline was overrun by vacationers looking for rapid tests — resulted in the phaseout of the clinical support mechanism. The hotline is limited now to Central Falls and Pawtucket residents and callers can still schedule tests and get connected to family support — the latter in no small part due to Baena’s tenacity. School’s back in session, and she’s handling BEAT COVID duties in her spare time.

“When I take on work, I own it and I feel really responsible for it,” says Baena, who ran for Central Falls City Council in November and won. “Especially something like this. We’re listening to their worst nightmares: ‘I need food today. I’m getting evicted.’ I’ve seen families where up to eight people all have the virus at once. Who’s going to go out to get food? How are they going to get supplies to clean and disinfect?”

Baena, who emigrated from Colombia to Central Falls when she was in elementary school, says the city’s struggles have never been clearer to her. Its strengths, too.

“The city doesn’t have a lot of money; there are not a lot of homeowners. Our school district,” — of which the state assumed financial control in 1991 — “isn’t adequately funded. It goes back to all those other issues, but it’s just nice to be a part of a community where we are able to get together, roll up our sleeves and say we have to do something and do it fast. It’s really unfortunate how this has affected us but I can say, being on the inside, that everyone is trying really hard.”