Bon appetit to a bygone era at must-revisit dining institutions.

Get swept off your feet at Bouchard Inn and Restaurant. It was first built in 1785 and has lived many lives over the years, including as a tea room and even a brothel. Today, it’s known for fancy French cuisine and superb service. You’ll be treated like royalty as you’re escorted past candlelit tables draped with fine linens, featuring fresh floral bouquets and wine glasses waiting to be filled. Waiters might recommend a vintage bottle or two, but many are priced lower than other high-end restaurants. Nothing on the menu disappoints, but asparagus and lobster in puff pastry topped with lemon beurre blanc is excellent to start. For the entree, treat yourself to a savory duck breast seared with a crisp coffee crust, finished with a tart brandy balsamic sauce. Order the ambitious, airy souffle to finish, which sells thousands per year, before heading to your room at the inn upstairs.
505 Thames St., Newport, 846-0123, bouchardnewport.com

Fresh off its century anniversary, the Olympia Tea Room has been a cornerstone of Watch Hill since 1916. Open late April through late fall, the bistro-style menu featuring New England seafood draws guests to soak up gorgeous harbor views from the dining room or heated outdoor patio with sunsets free of charge. The restaurant was opened by Greek family, Michael, Theodore and Speros Tramis, who ran it through the ’70s until Jack and Marcia Felber bought it in 1980. With pink walls and a checkerboard floor, the space pays homage to a bygone era with a sign that reads “Temperance” hanging above the bar. Lucky for us, an expansive wine list and stiff drinks flow freely here, including martinis, mojitos and more. The fish and shellfish dishes feature fresh specimens straight from the sea that you see right outside the windows.
74 Bay St., Watch Hill, 348-8211, olympiatea room.com

Chef Sai Viswanath couples international cooking with the bounty of New England seafood inside the historic 1818 warehouse built during Bristol’s hushed past. A charcoal tandoor oven roasts smoky lobster, pork loin and Statler chicken breasts, and pizza forgoes the same old dough for excellent buttery naan bread grilled and topped with arugula, parmesan, truffle oil and aged balsamic vinegar. Veggies and fish are prepared Pakora-style, fried in a light chickpea batter, but traditional options are also available including a simple stuffed lobster or steamed littleneck clams. A waterfront view is visible from the upstairs dining room complete with a fireplace. In warmer months, the outdoor patio is a prime location for watching boats bob past along the bay.
259 Thames St., Bristol, 254-2005, dewolftavern.com 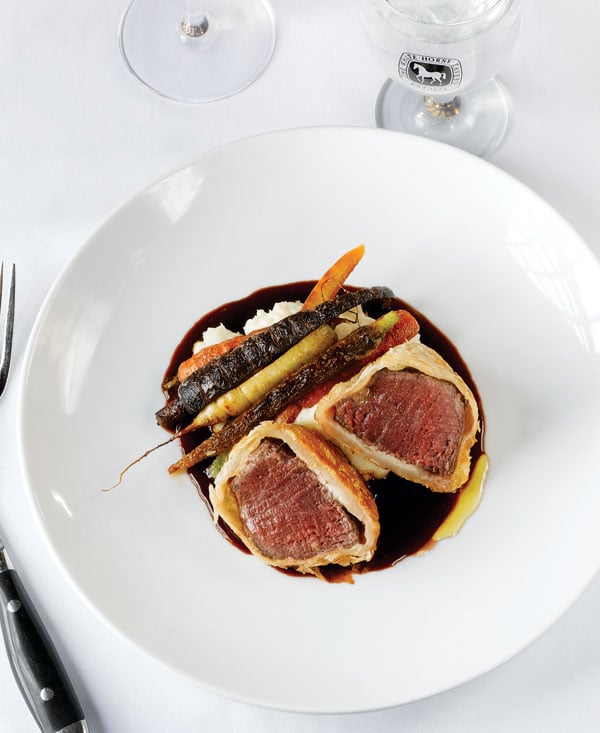 The beef Wellington at the White Horse Tavern. Photography by Angel Tucker.

Step back in time at the White Horse Tavern where chef Richard Silvia helms the kitchen inside the oldest tavern in America, where our founding fathers, merchants and pirates met and dined since 1673. Open 364 days a year, the intimate ambience includes cozy tables, uneven wide-plank floors and original fireplaces. Whet your palate with a hard-to-find wine, a local beer on draft or bourbon as you relax and savor the night. Start with the housemade charcuterie served with local artisan cheeses, pickled vegetables, relish and sauces. Decide between the native catch of the day or the hearty lobster mac ‘n’ cheese with rigatoni and native lobster. The beef Wellington just may be the deal-breaker, with rich foie gras pate, flaky puff pastry, velvety potato puree, glazed carrots and a Perigeaux sauce. Scratch the White Horse Tavern off your bucket list and then add it to your list of favorite places.
26 Marlborough St., Newport, 849-3600, whitehorsenewport.com

Waterfront dining in Providence may be an anomaly, but the view at Waterman Grille picks up the slack. A seat in the dining room overlooks the Seekonk River and the seasonally driven cuisine follows suit with remarkable flavor. In warmer months, the covered patio beckons as crew teams row past, adding to the atmosphere. The restaurant has adapted with the times, offering small plates for parties to experience several options in one sitting. Go adventurous with tender grilled octopus or safe with steamed mussels in a savory saffron broth. The upscale burger takes a playful poke at the Big Mac with Thousand Island dressing and American cheese blanketing a fancy grass-fed patty. A three-course meal is also offered Sunday through Wednesday for $29 per person, during which the excellent wood-grilled sirloin can be ordered for a steal.
4 Richmond Sq., Providence, 521-9229, watermangrille.com

Dining at Chez Pascal is a treat for the eyes as well as the palate. The walls of the snug East Side institution boast a revolving exhibit of works by local artists as well as staff members while the tables feature the French-inspired cuisine of Matthew Gennuso. The seasonally driven menu reflects available meat and produce from local farms while travelling far past typical Parisian fare, with dishes representing Alsace, Normandy, Gascony and Brittany as well as other cultures. Duck confit, cassoulet, escargot and herb crepes provide a fully Francophilic gastronomic experience. Annual events — August’s Tomato Dinner, December’s Pat’s Pastured Grazing Dinner, January’s annual brunch and the April 2 Ham Jam featuring Chez Pascal’s kitchen band and other chef musicians at the Met  — draw enthusiastic diners. In 2012, the Gennusos wrangled opportunity from disaster when a truck accidentally crashed into the restaurant’s front wall. The resulting repair renovated the damage into today’s Wurst Kitchen, offering house-made sausages, hot dogs and more with window service to Hope Street.
960 Hope St., Providence, 421-4422, chez-pascal.com

Cafe Nuovo has had a front row seat to Providence’s renaissance. Founded the same year as WaterFire, the Riverwalk restaurant features the blazes up close  — including the gondolas, music, people-watching  — either al fresco or through glass curtain windows. Known early on for dishes that resemble architecture, Cafe Nuovo is where art meets cuisine, reflecting a global fusion of flavors by chef Jules Ramos. Korean beef lettuce wraps share the menu with the traditional Italian dishes of house-made gnocchi with veal and peas, and crispy sushi stands beside a cowboy ribeye. In sourcing the menu, chef Ramos relies on a complex network of growers and purveyors, both local and international. Antelope comes from Broken Arrow Ranch in Texas, El Rey chocolate from Venezuela and produce from local farms. The voluminous wine list spans the globe as well, with bottles from both hemispheres at a variety of price points.
1 Citizens Plz., Providence, 421-2525, cafenuovo.com

The sleek black, white and red dining room belies the diner history of Nicks on Broadway, while the hustle, heart and commitment to good honest food have made chef Derek Wagner’s restaurant a nationally recognized Providence landmark. In 2001, Wagner bought the original restaurant from its former owner, Nick Sammartino. Now operating in a second, larger location, Wagner kept the name in homage to his old friend. Anchored by a whole animal butchery program featuring Blackbird Farm beef and pigs, Wagner — a 2016 and 2017 James Beard Award semifinalist nominee for Best Chef: Northeast — has built strong relationships with Rhode Island’s growers, producers, farmers, fishermen and artisans through opulent use of local produce and proteins for dinner and brunch. Try the chef’s tasting menu of four or seven courses, matched with wines from an excellent selection. For those mornings when a little extra fortification is required, try any of the eggs Benedict variations, or the hearty combination of cassoulet and eggs for brunch. 500 Broadway, Providence, 421-0286, nicksonbroadway.com

Explore Simpatico Jamestown’s nine different dining areas to find the atmosphere that suits your mood. As a no reservations restaurant, venture to the street-side outdoor pergola and sit under the string lights amongst the tall trees and gardens, or wander upstairs to the tree-top Knot Deck bar for a casual rendezvous. The North Deck offers formal dining, while the Green Room gives an abandoned greenhouse effect. Since new ownership in 2012, the restaurant has undergone renovations inside and out, creating an airy, secret-garden vibe. The chef gives each dish its own fun twist. Start with the calamari antipasto on a bed of salami, capicola, hot peppers and baby spinach. Then dive into a mouth-watering Bolognese that features ground veal, beef and a variety of sausages, which simmers all day in a housemade red sauce. Save room for the chocolate sushi, chilled in dense chocolate truffle, rolled in toasted coconut and served with a bruleed banana and raspberry cocoa sauce. People of all ages, in jeans or dressed to impress, enjoy this multi-sensory dining experience.
13 Narragansett Ave., Jamestown, 423-2000, simpaticojamestown.com