The scrappy upstart, who was born in the Dominican Republic, is working his way through the pro boxing circuit. 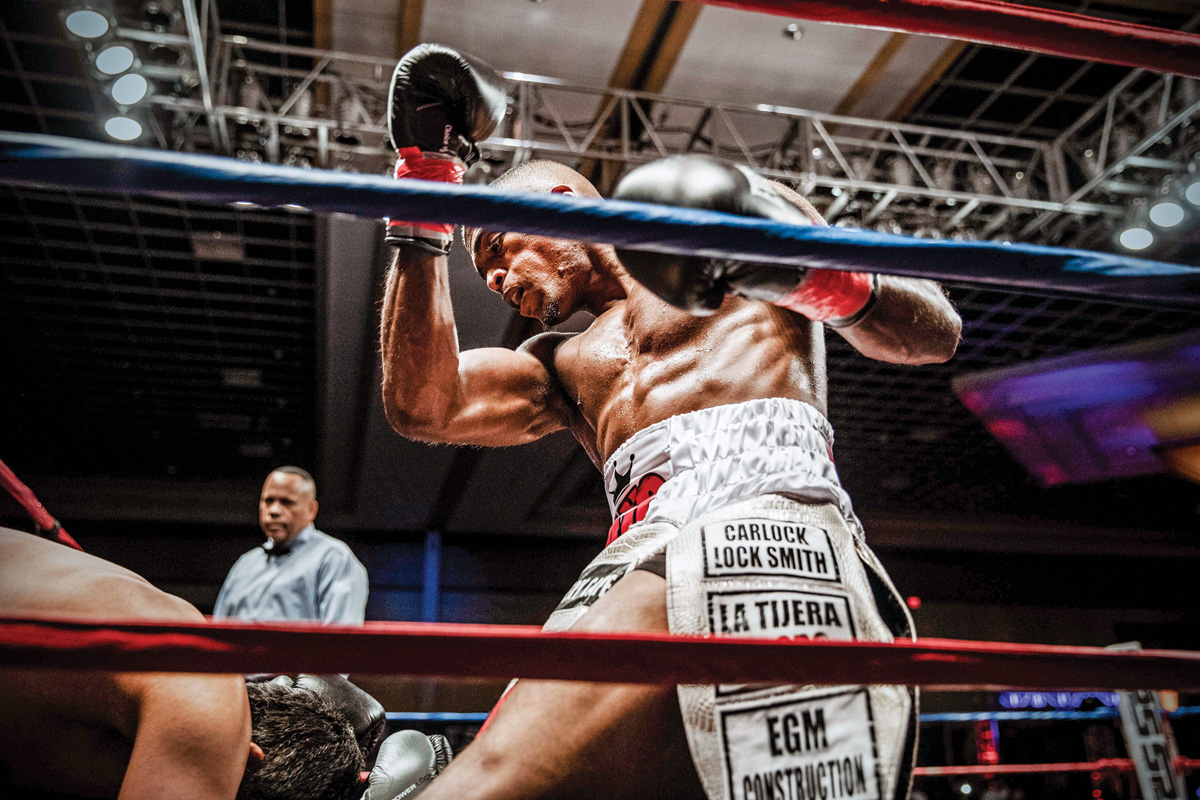 Under the bright lights at Twin River Casino Hotel in Lincoln, the scent of fried chicken diffusing from buckets of KFC for sale by the entrance, it almost seems unfair.

Victor Reynoso, lean and tall and light on his feet, is fresh off his professional boxing debut. Two months back, the junior middleweight sent his opponent to the canvas in the second round, winning the bout on a technical knockout, when a boxer is unable to continue a fight. Never leave it to the judges, Reynoso says. A knockout is always the goal.

In a sport where you’re only as good as your last fight, Reynoso has a lot to prove. And on Thanksgiving eve, second on a nine-bout fight card aptly deemed the Holiday Bash, he’s itching for another knockout.

Reynoso enters the sparsely filled event center in a haze of smoke and merengue music, members of his posse bearing two red, white and blue flags: one American, one Dominican. His white gladiator trunks display the names of Providence businesses that support him. Parkview Bakery Cafe, Carlock Lock Smith, EGM Construction and La Gran Parada restaurant all believe in Reynoso enough to use his body for advertising, and he takes their confidence to heart. He’s not about to embarrass them, or himself.

Reynoso dips through the ropes, enters the ring and is within a comparative sightline of his opponent and perfect foil, Carlos Galindo of Lowell, Massachusetts: five foot six inches to Reynoso’s six feet; thirty-eight years old to Reynoso’s twenty-four. Galindo’s a little bit soft in the mid-section, a little weary in the eyes. And his record, a single win to six losses, could lead one to believe he’s the region’s most prolific punching bag.

After the bell dings, Galindo spends his time in the floodlights heaving his body at Reynoso, who blocks headshots and returns them with exponential reach and power. Galindo bows to the floor four times, the last from a right cross that brings him to his knees. The bout — more like a lopsided schoolyard scuffle than a brutal boxing match — is over forty-seven seconds into the second round.

Hip hop music blares from the speakers and Reynoso’s team casually enters the ring. Their man would win; they knew it before fight night. Reynoso’s trainer, Paul “Sting Ray” Shorts, pulls red tape from his mentee’s right wrist and yanks off a glove. A bow-tied referee then grabs Reynoso by his free hand, lifting it over his head. A few cheers resound from the back of the event center, and an announcer approaches the victor for comment.

Reynoso grips the mic with one hand and Shorts works on unraveling the other.

“I was born in the D.R. I used to shower in a big blue barrel. Use the bathroom with no running water.”

The crowd chatters and chews, only paying cursory attention to the young boxer’s oration. Guileless, Reynoso keeps going, shifting his weight from one foot to the other.

“I want to be able to inspire and motivate everyone around me. No matter how big the wave, we don’t fold under pressure.”

This wave, on this night, is a mere ripple compared to what comes next.

As a kid, Reynoso was obsessed with Jackie Chan, Bruce Lee and Jet Li. He hated reading — English is his second language — but had no problem scrutinizing the subtitles in his favorite action movies.

“It was all about honor,” he says. “They had something to fight for.”

So, at age twelve, when a friend mentioned a nearby boxing gym, Reynoso jumped at the chance to train there. The now-closed Nickerson House community center was just down the hill from his triplex in the Olneyville neighborhood of Providence. He saw boxing as a preventative measure: He was never bullied but, as a scrawny kid, he wanted to be able to defend himself.

There were a few years of baseball, too, and Reynoso was good. A natural athlete. But his mom worked two jobs and could rarely bring him to practice. He didn’t have anyone to take him to the batting cages or throw the ball around.

“As I got older, I felt like my skills were diminishing. I couldn’t work on my craft,” Reynoso says. Not like with boxing, which required a currency he could offer all on his own: commitment. Knowing Reynoso’s situation at home, the Nickerson head boxing coach, Leonard Brown, often trained the skinny but strong-willed Reynoso for free.

Reynoso was five and his sister was seven when his mom emigrated from the Dominican Republic and landed in Olneyville, where her brother lived. She moved her kids from one underprivileged neighborhood in the D.R. to another in the United States but, even in the poorest communities in this first-world country, they would have access to electricity, running water and public education.

Reynoso’s mother took full advantage, enrolling her kids in local schools with the best educational opportunities. After a few years at his neighborhood elementary school, Reynoso attended the San Miguel School, a Lasallian middle school for boys. Every Friday, administrators would send students home with grocery bags filled with food. There was always some candy, which Reynoso grabbed first.

“They instilled important values in me. Hard work, dedication — things I still use in day to day life,” he says. “They pushed me to be the best I could be and I always had their support.”

Reynoso’s seventh-grade teacher, Marilyn Wentworth, says Reynoso was one of those likeable kids who could get himself into mischief from time to time, but never anything serious. His worst was accidentally smashing his arm through a glass window on a swinging door, Wentworth says, which left him bloodied and scarred. But he was gentle. Respectful to his instructors. Teachable.

“He worked for everything he got, and he worked hard,” Wentworth says. “You could see the drive in him.”

Sometimes, Wentworth gets kids who are ready to wander off into gang life by twelve or thirteen. Not Reynoso. When he was in her classroom, he already had a fully formed dream of making it as a professional boxer. His goal was untraditional, but it kept him on the straight and narrow.

“This kid did everything he could do to get to the place where he could reach that dream. Nope, he’s not an attorney — and we do have some of those — but here is a kid who found his passion…. You could see he was going to make it,” she says.

Meet Up at Downtown Providence's Newest Speakeasy Needle and Thread