It’s a family affair at Smithfield’s Blackbird Farm. One-year-old Loretta Bouthillette toddles around the barn area, watching the ten-week-old heritage breed piglets as they play in their nursery. Then she makes a run for the manure barn, which looks like a lot of fun to play in, especially since the farm dogs, Beau and Blue, are doing it.

Loretta’s grandmother, Blackbird Farm owner Ann Marie Bouthillette, gently dissuades her, crushing the toddler’s impulse to jump right in the muck, all while explaining the pigs’ precise diet of three stages of grains and sharing details about what life is really like at the farm. 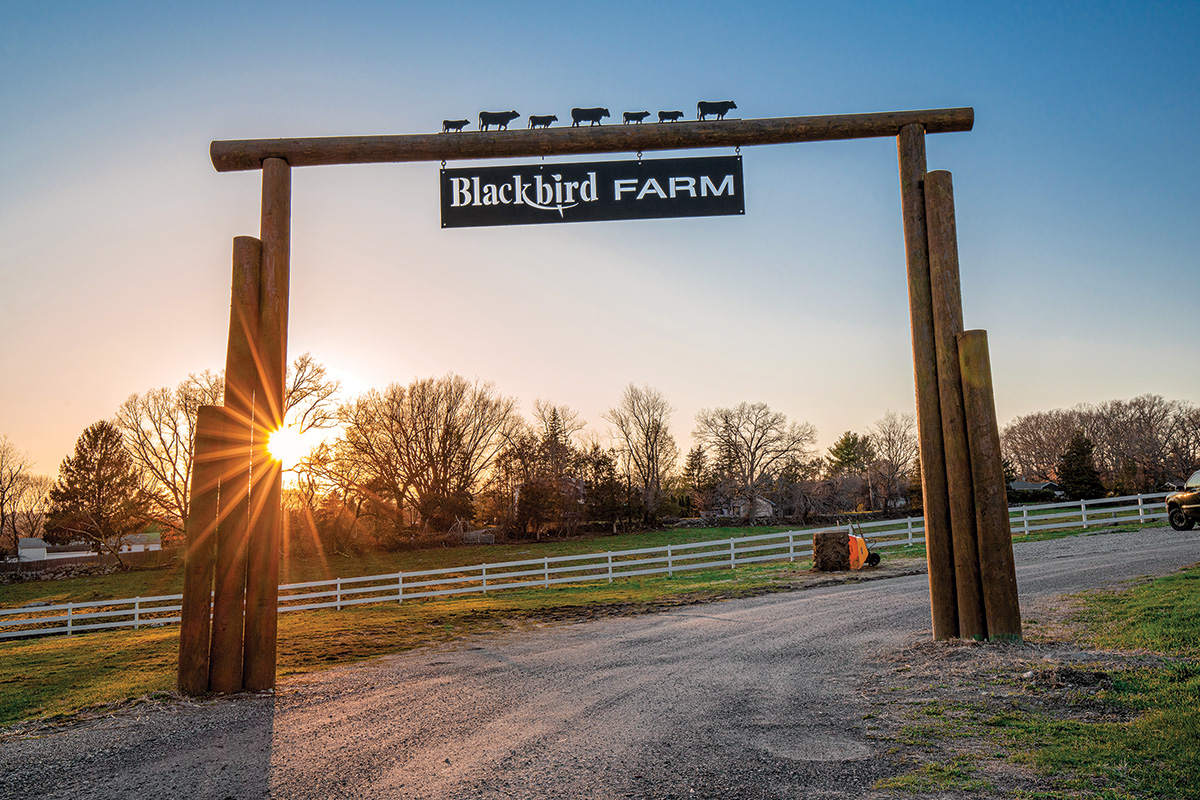 “I watch her every day. She’s part of our family and this is what farm people do,” Ann Marie says with a smile. The Smithfield family farm humanely raises antibiotic-free, pasture-fed, 100 percent Black Angus cattle and American heritage Berkshire pigs. The organic, dry-aged manure from the barn goes right back out to the fields to fertilize the grass that the cows eat.

While Ann Marie cares for Loretta and multitasks at the farm, her son, Brandon Bouthillette, Loretta’s father, moves 1,600-pound hay bales wrapped in green and white plastic sheeting in the fields with a tractor. Ann Marie affectionately calls the mounds mushrooms and marshmallows and, inside them, the grass ferments and turns to hay for food (green) and straw for bedding (white) for the cows for next winter. Brandon looks after the fields and raises the cows and pigs with help from a few farm hands and his wife, Sarah, who also works at the farm store down the road selling beef and pork. Brandon’s sister, Samantha, raises poultry for their eggs and cares for turkeys at the farm. Brandon’s father and Ann Marie’s husband, Kevin, owns and runs a steel business, Inter-City Contracting, located across the street; at the farm, he clears property, makes fields and builds things while keeping track of the books. Their other son, Troy, also manages the steel shop and pitches in at the farm when help is needed. Employees at Inter-City Contracting get treated to a Blackbird Farm burger barbecue for lunch every Friday.

Kevin’s father and Ann Marie’s father-in-law originally purchased Blackbird Farm’s initial four acres of land for his residence when he was building Inter-City Contracting’s steel shop across the street. When Kevin and Ann Marie married in 1984, she moved to the farm and the couple continued to buy more and more land while Kevin operated the shop. He sold his low-mileage Corvette he kept preserved in the garage to buy the back lot. The most recent expansion is the side lot next to the family’s home. 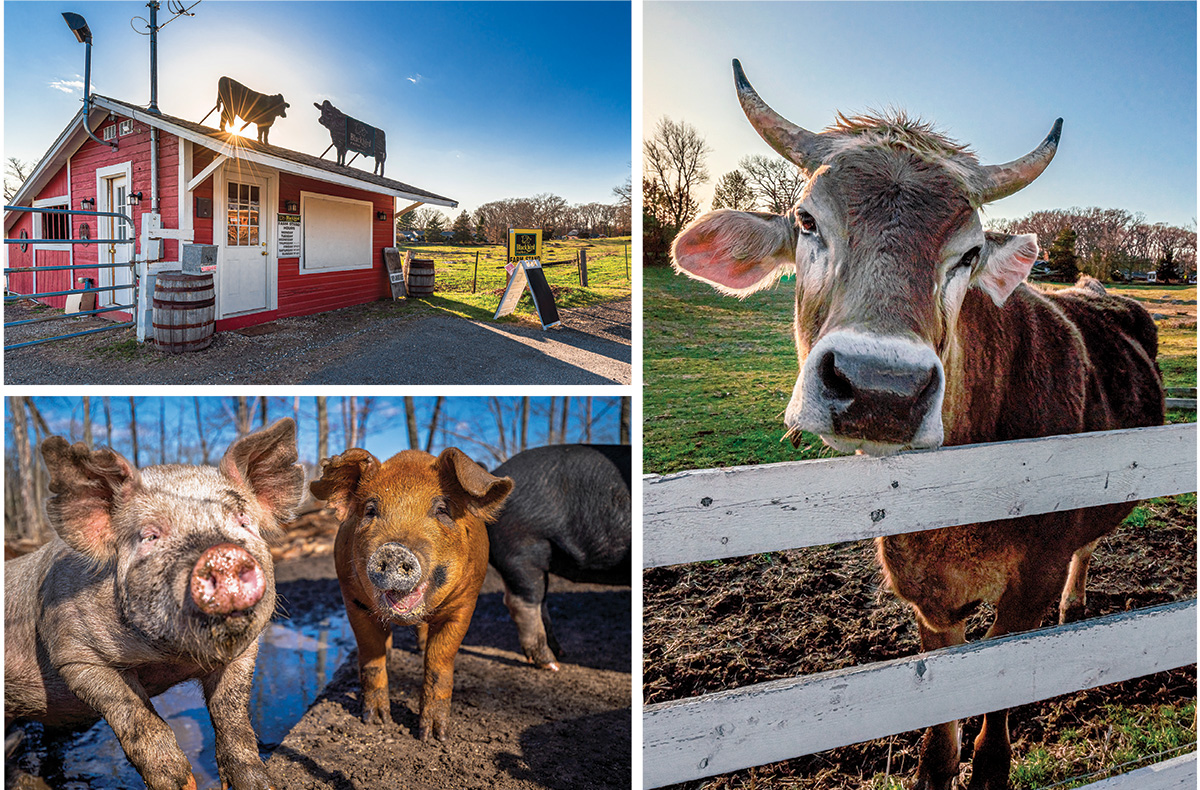 The farm stand is open Thursday through Sunday, where guests can visit the farm’s oxen; heritage Berkshire pigs are raised free of antibiotics. Photography by Wolf Matthewson.

“Can you imagine, there would have been thirteen houses on this piece of property?” Ann Marie says, pointing at a field that’s as lush as Vermont’s green mountains. Instead of another housing development, her cows peacefully graze there right beside a street where cars drive by each day. Now the family owns more than 200 acres. “That was always Kevin’s dream, to own as much land in Smithfield as he could,” Ann Marie says.
Ann Marie is always working. She keeps an eye on the cows and pigs at all hours — especially the pregnant ones. “You have to care. If you don’t put your heart into this, you really can’t do it,” she says. “I make an effort every day, twice a day, three times, to check on the cows. If one is in the calving pen, I am out there all the time.” She also makes sales calls and delivers meat orders directly to restaurants, including Castle Hill in Newport, Salted Slate, Nicks on Broadway, Oberlin, Gracie’s and Ellie’s. Meanwhile, in the truck, she gets a phone call from her daughter-in-law, Sarah, who is contemplating what time to get her nails done before she heads to work at their Moo Moo Ice Cream Trailer, the ice cream shop next to the farm stand. That’s modern farm life.

A cow in a separate barn area looks like she’s ready to “calve out” any minute, which means she’s almost ready to give birth. “We keep things nice and comfy cozy for the mothers,” Ann Marie says, nodding at the cow, which is standing and pacing with a bulging belly. “I do play classical music when they’re in labor.”

Blackbird Farm calves out eighty to ninety cows per year, year-round. “Every animal is bred, born and raised here,” says Ann Marie. “We feed all grass (and hay in winter), then finish on non-GMO corn. We feed animals in the morning at 7 a.m., then we feed them again at 7 at night, so they are not feeding continuously. They have access to grass twenty-four/seven.”

The Bouthillettes grow all of their own hay. “The thing I learned from growing up on a small homestead farm is you are what you eat, and you really want to know what these animals are eating,” Ann Marie says, adding that she was raised on a small homestead in Glocester. “What we’ve done is breed very consistent animals, including the pigs. We are not using hormones or antibiotics, but we are using corn to finish to make the product even sweeter.” 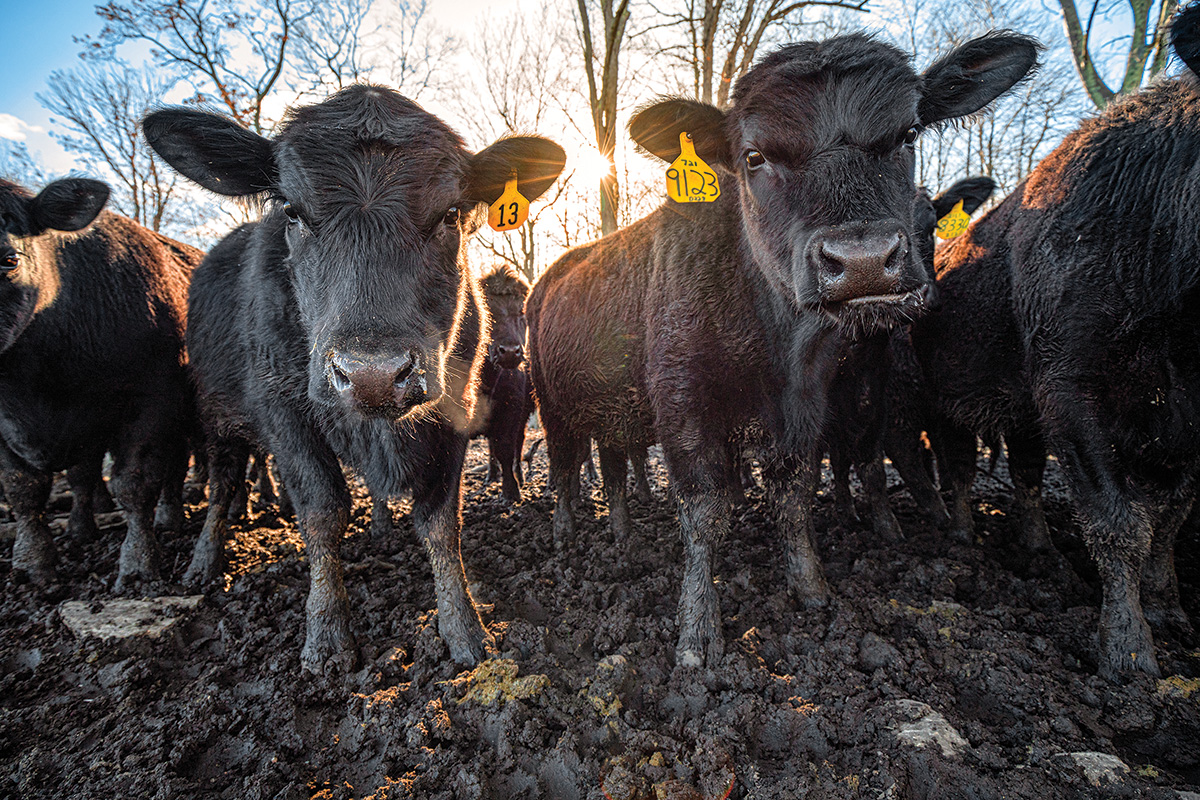 The cows are kept outdoors, and they roam a penned area that travels through the woods with sections of trees, grass and mud. They eat all the grass, and then they are moved to another pasture that’s recently been cut and baled. When it’s cold, they have access to a barn heated with wood that’s felled in the forest, and they can also come in for shelter in the summer if it’s raining. The two farm dogs protect the cows and their young from predators. “When you live on a working farm, everything has to do its job or it can’t stay, including the working dogs,” Ann Marie says. Beau and Blue will lie with the calves if the mother allows it.

The heritage Breed pigs are kept in the upper lot, next to woods and pasture. Pigs roam freely and fatten up on a strict grain diet. “You are dealing with consistent meat, that’s why your breeding program is so important,” Ann Marie says. “All of the chefs that buy from us will tell you there’s not one piece of meat that’s different from the next. It’s all consistent. Fat is good as long as you know where it came from.
“We fit into the Keto and Paleo diets,” she adds with a laugh.

A boar is napping like a cat with its big belly on display; there’s no shame about fat rolls here. As we approach, the pigs emerge from the mud and walk up to the wire fencing, sticking their snouts close to the edge as if to say hello. They look as happy as pigs in you-know-what.