Aguardente Restaurant Shares the Owners’ Immigration Stories from Portugal, the Azores and Guatemala

The Fox Point hotspot celebrates the immigrant journeys of its three founders through food, art, music, spirits and more. 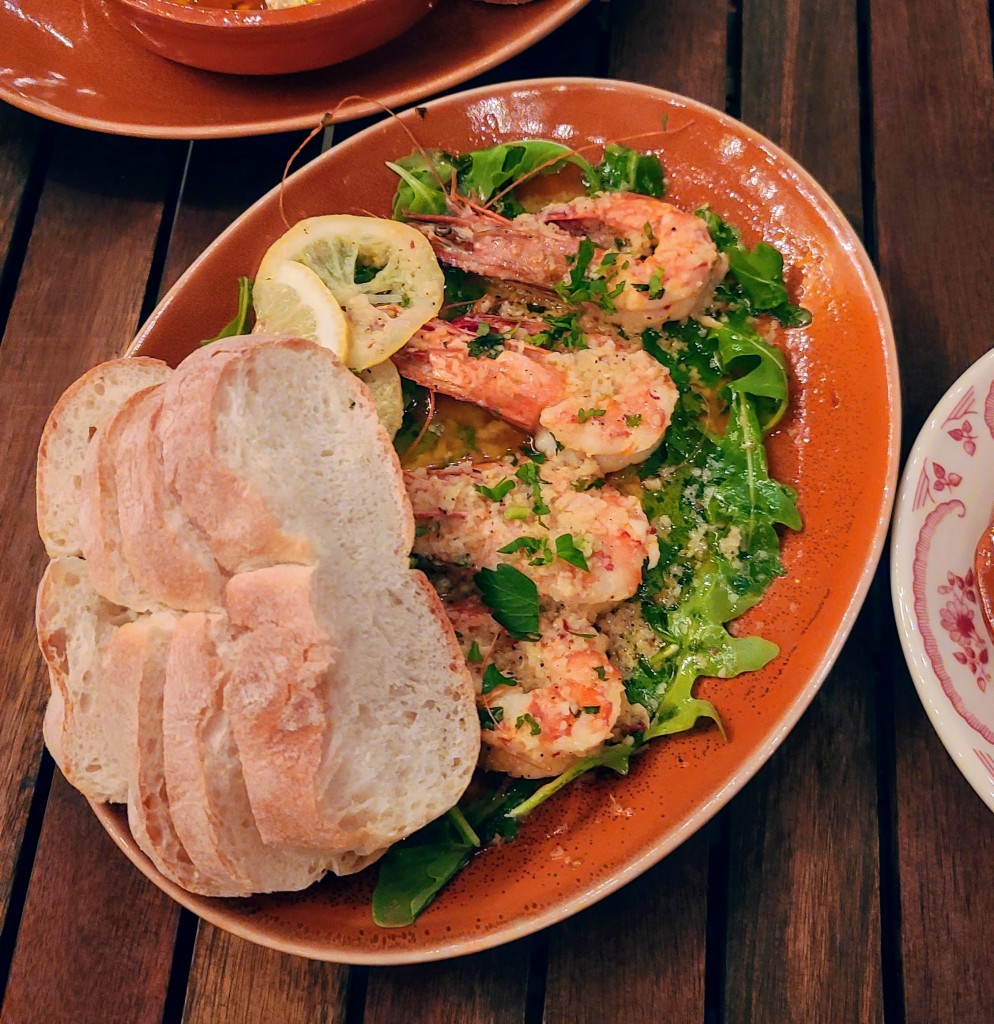 Every dish on Aguardente’s Latin-influenced tapas menu tells a story. Natalia Paiva-Neves is the curator of the Portuguese dishes and Magda León created the Latin menu items at the Fox Point restaurant that celebrates the immigrant journeys of its three founders through food, art, music, spirits and more.

Owner Victor Pereira came up with the concept. His family hails from the mainland of Portugal. Previously, he and his wife, Sandra Martin, helped open Aleppo Sweets around the corner and they continue to consult for the restaurant. Paiva-Neves, whose family is from the Azores, created the menu and trained the kitchen staff to execute it, and artist Magda León is from Guatemala and she painted all of the beautiful murals along the dining room walls. All three founders came to this country when they were children.

Many people know chef Paiva-Neves from her Portuguese family’s restaurant O Dinis in East Providence. She sits at Aguardente’s colorful bar at the new neighborhood hotspot recounting tales about how she came up with some of the dishes for the menu. She was on the beach one afternoon in Little Compton with Pereira and family. In her cooler, there was shrimp that she had been marinating for dinner that night. On their way to the beach, they had also decided to pick up some littleneck clams from O Dinis to cook once they got back to the house. But as the late afternoon stretched into early evening, the party was reluctant to leave the surf and sand. Paiva-Neves decided to cook everything right on the beach rather than go back to the house. They foraged for driftwood they found on the shore and built a fire, then skewered the shrimp to cook over the flames. They already had a giant copper pot on hand, in which to lay the littlenecks, and they used a stick they found to shift the shellfish until it was steamed. “We had to move fast because the fire was hot,” says Paiva-Neves with a laugh.

They scavenged for what they needed to cook and used a beach towel to handle the pot lid. They let the food cool and “we ate with our hands,” Paiva-Neves says. This beachside shrimp dish was named Victor’s carabineiros on Aguardente’s menu, which involves shrimp pan-seared in garlic, lemon and butter that are meant to be peeled and eaten whole, including the heads (just squeeze and suck the flavor out of the heads just like the Portuguese do, trust me). It’s served with sliced bread from their neighbor, the Fox Point Portuguese bakery, Silver Star Bakery. The beachside clams also evolved into Amêijoas à Portuguesa, Portuguese clams in white wine, garlic, olive oil and cilantro, also served with a generous side of fresh, sliced bread. 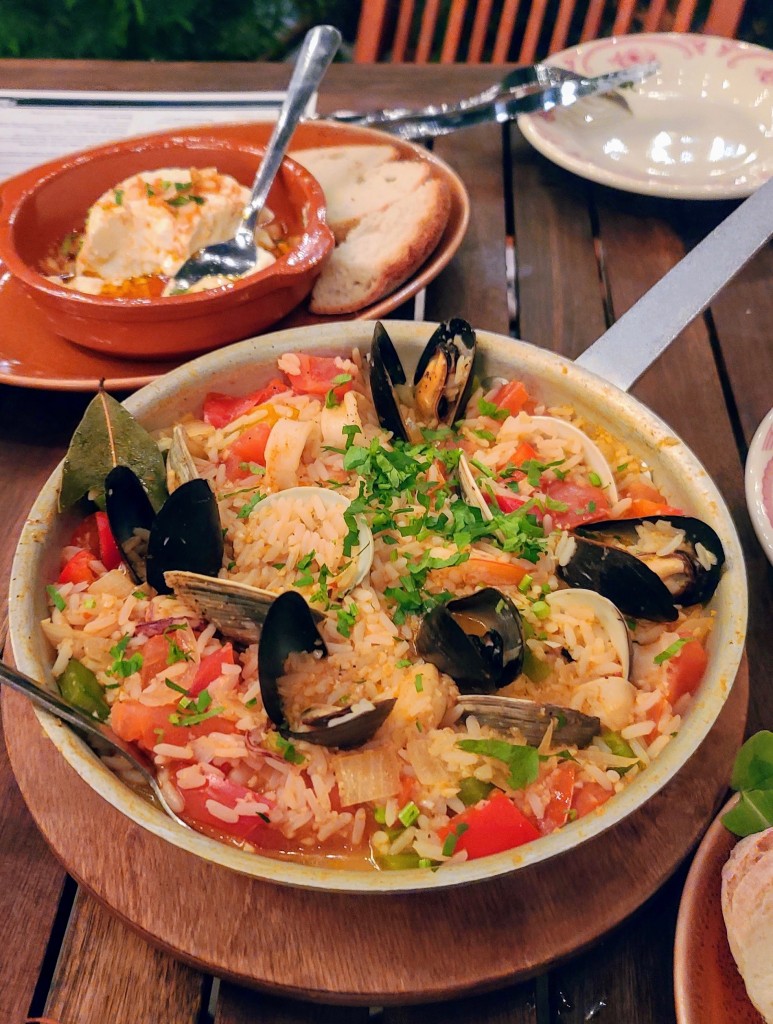 Paella and farmers cheese at Aguardente.

From the shrimp and clams dishes to the garlic-and-herb-marinated lamb chops entree, every dish comes with a tale about how it was created. “That’s what food is, it’s a story,” says Paiva-Neves. “And everything is a story here.”

Including the name of the restaurant. Aguardente restaurant is named after Portuguese brandy. The restaurant offers several varieties of the spirit, also called “fire water.” The sipping brandy gives off a flash of high-proof heat followed by smooth notes of vanilla and caramel. It’s nice to have it as a finale to an incredible meal, served with desserts like Aguardente’s flan, which is also made by a Portuguese woman in the neighborhood. Don’t skip the bom boms, semisweet chocolate cups filled with ginja liqueur, which you eat in one bite that explodes in your mouth in delight.

The restaurant relies on many neighborhood businesses for ingredients. The almondegas (meatballs) are made of ground beef and pork and Portuguese chourico that is specially ground by neighborhood butcher shop (Carniceria Central) Central Meat Market on Gano Street in Providence. The savory spheres are served with sautéed garlic and onions. There’s also a dish of halved avocado topped with fried chorizo, Oaxacan cheese and crema, which is a nod to artist Magda León’s Guatemalan homeland, alongside the cactus tacos and a savory dessert called rellenitos, which is “sweet plantain filled with black beans and fried, served with either a cilantro crema sauce or espresso infused semisweet chocolate sauce.”

The menu is mainly Portuguese with touches of Spanish, Mexican and Guatemalan flair. “Our concept here is to travel to as many places as possible. That’s why we are doing tapas. It’s the story of immigration,” says Pereira.

Originally, Pereira thought he might want to open a mezcaleria, serving flights of the Mexican spirit mezcal, but he changed his mind. “My wife said, ‘but you are not Mexican,’” Pereira says with a laugh. “We needed a new concept. That’s where the Portuguese fire water, aguardente, came from because it’s a spirit that crosses all nationalities, all cultures, religions and celebrations. The only difference is how they are made.”

Mezcal comes from agave and aguardente is made from Portuguese wine that is aged twenty years in French wine barrels. Pairing the aguardente with a Portuguese and Latin menu curated by Paiva-Neves and León was a no-brainer for Pereira. This restaurant is a continuation of the same idea of appreciating the immigration journey, just like the Syrian Aleppo Sweets that Pereira helped open down the street. “It’s reminding people that we are bridging a much bigger world and that we need to embrace and love each other,” he says. “What three better ways to do it than through food, spirits and art?” 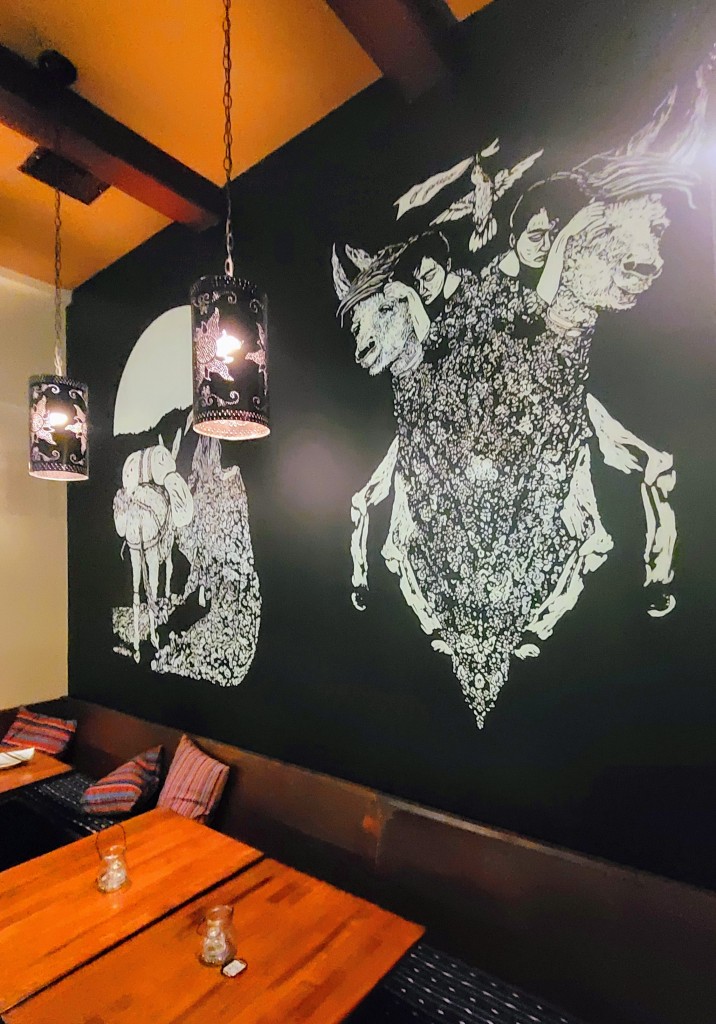 When guests sit in the dining room, they can look around and see seven murals, painted by Magda León. The restaurant is also designed by Victor’s wife, Sandra Martin, who helped curate the interior and exterior as well as the experiential bathrooms alongside León. The restaurant also has a beautiful outdoor patio with twinkle lights, but inside, the art tells León’s immigration story from Guatemala. She was born in Guatemala, and came to the United States at age one, then returned to Guatemala again when she was three and came back to the United States eight years later. “I grew up being in both countries, but I always felt like I didn’t fit in with the Guatemalans and I didn’t fit in with the Americans,” she says.

The mural starts off showing the back of a young girl facing the horizon. She’s wearing a forward-facing baseball cap and a dress full of flowers. The hat is a necessity to survive the long immigration journey across the hot desert, she says, and the flowers represent her hopes and dreams. The next mural depicts a donkey hauling luggage, representing the relationships immigrants leave behind in their home countries. The next drawing is the same but split in two, meant to depict the divide that immigrants feel when trying to maintain their heritage while adjusting to American culture. The next mural shows a woman sweeping flowers, and it represents the dissolution of the immigrant losing themself in the process of trying to assimilate to the new culture. In the final mural, the girl is no longer wearing the dress with flowers, but has changed into jeans. There are a few flowers left, but now the baseball cap is worn backwards as an accessory rather than for survival. “It’s that moment where you realize the journey has changed you,” León says. “You may look the same, but you’ve changed. There are things that won’t ever be the same.”

León and Paiva-Neves agree that they consider themselves immigrants both in their home countries and in America. Aguardente brings their mutual feelings and cultural differences together under one roof and celebrates the sharing of their stories.

“That’s a part of our culture that no one talks about. We have so much in common,” León says, gesturing toward Paiva-Neves. “It’s a journey to come to that place of understanding. It’s a full circle moment, where you realize I don’t fit there, and I don’t fit here. But we fit.”