Plants to Food, a new food manufacturing facility, is churning out plant-based cheeses, sauces and more for veggie-lovers nationwide. 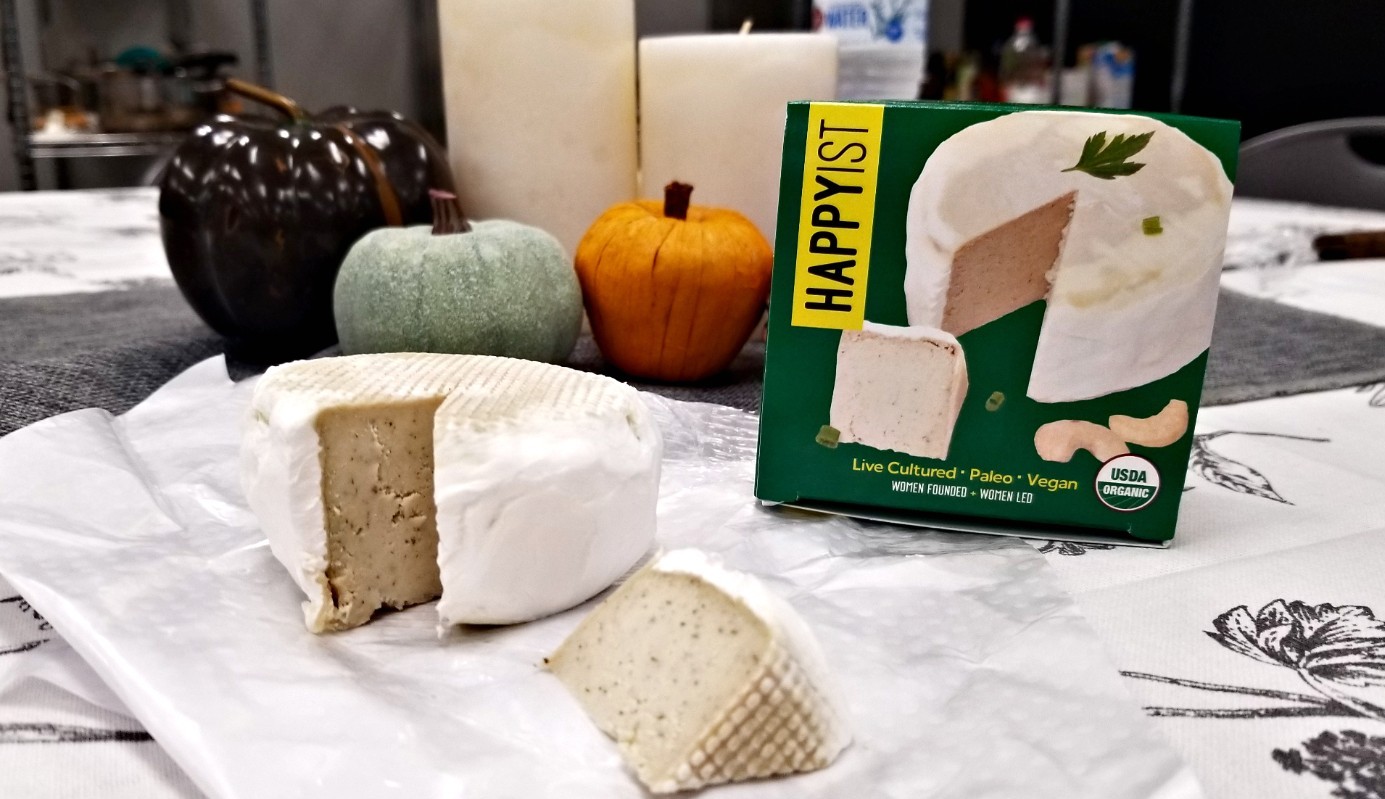 Plant-based Happyist cheese is one of dozens of products made at the new Plants to Food facility in Lincoln. (Photos by Lauren Clem)

Scott Lively used to be a beef guy.

In 2003, the Martha’s Vineyard-based entrepreneur founded Dakota Beef, a company that would go on to become one of the country’s largest organic beef suppliers. He’s been involved with several other organic beef companies and even wrote a book — For the Love of Beef — and blogged about meat under the handle “the Beef Geek.”

But all that’s changed in recent years. Though he still eats meat a couple times a week — he describes himself as a “flexitarian” — his newest venture goes all in on plants. In August, Lively founded Plants to Food, a co-manufacturing facility in Lincoln that aims to become the largest manufacturer of exclusively plant-based foods in the country.

“Any plant-based item, from marinaras to salsas to plant-based cheese,” Lively says, when asked about the types of foods made in the facility. “We have a plant-based hard-boiled egg. Looks and feels just like one. The plan is to become a hub where small- to middle-sized food manufacturers that are ready to go to the next step of national distribution will make their products.”

The building, tucked back in a commercial park off Route 116, was once the home of Wildtree, a popular line of health-oriented food products founded more than two decades ago. Lively was one of several businesses owners who contracted with the company as a co-manufacturing client — meaning Wildtree made the food, and the client marketed and sold the product made according to their own recipes. In Lively’s case, the product was a non-dairy cheese made for Happyist, a plant-based cheese and chocolate company he co-owns on Martha’s Vineyard.

Several months ago, he says, he learned Wildtree was up for sale. He faced a choice: find a new place to make his cheese, or buy the company himself.

“I have Whole Foods [as a customer], I have some other big customers, I couldn’t pivot, so I ended up buying the business from them and created Plants to Food LLC,” he says.

The facility now produces foods under the Happyist and Wildtree names as well as dozens of other brands that have partnered as co-manufacturing clients. Those brands include the Backyard Food Company, a Warwick-based company making barbecue sauces and fixings, and the Gracious Gourmet, a line of jams and spreads based in Connecticut. Lively says he’s hoping to tap into the vibrant food scene in Rhode Island and work with companies looking to grow their brands to reach more customers. That means working with locally owned businesses that have graduated from incubator programs such as Hope and Main in Warren and are ready for wider production.

“We’re not an incubator. We are not here to put you in business,” he explains. “You’ve got to have a little more than just an idea. I can’t be the one to put you on the map. I can make your map much bigger.”

Lively demonstrated the techniques behind his plant-based products during a tour of the facility in October. In one room, a metal box large enough to be a walk-in freezer holds several trays of cashew-based cheese. Lively opens the door to the man-made cheese cave, and the smell of aging cheese wafts out.

“We literally buy raw, uncooked, unsalted, organic cashews. We boil them, emulsify them into a paste like hummus, mold them into what we call a puck, add a live active culture — at this point it’s just a white bacteria penicillium mold — and it ages for up to twenty-one days and creates that beautiful rind and creates a lot of flavor because of all the reactions that are happening,” he says. 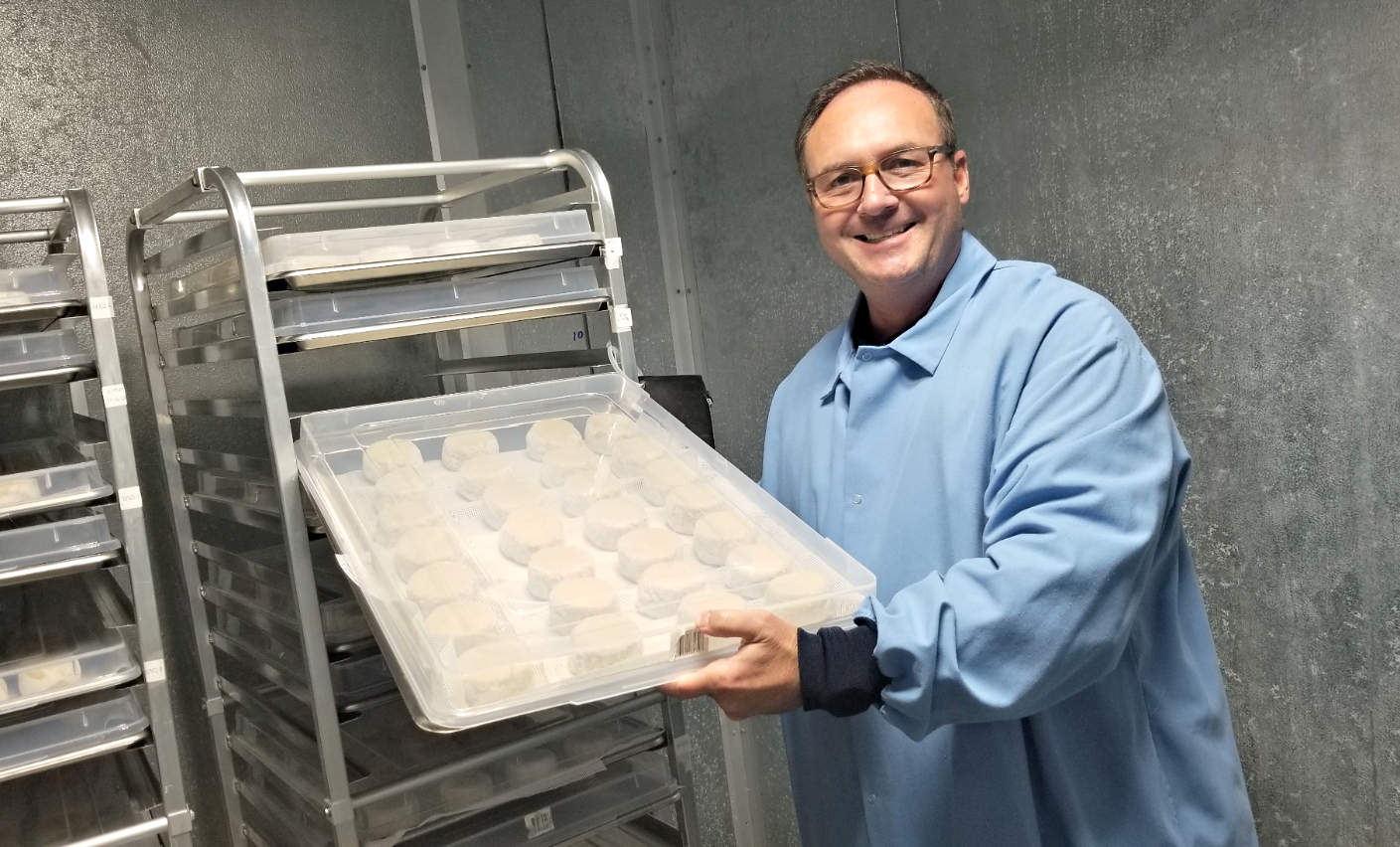 Scott Lively pictured in the cheese cave. The cheese ages for about fourteen days.

“It’s like aging real cheese, but we’re using cashews instead of dairy,” he adds. “It’s like aging wine or salami or anything else. The same chemical reactions are happening. You’re creating nutrient-dense, healthy food, with only about four or five ingredients.”

In another room, staff members stir giant kettles while a mist that smells sweetly of barbecue sauce fills the air. Finished products head to a large room near the front of the building, where staff preps them for shipping to clients, retailers or direct to customers. 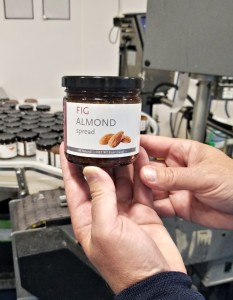 A fig almond spread produced at Plants to Food.

Though it’s his first business venture in Rhode Island, Lively says he looks forward to working with local as well as out-of-state companies. He currently has about forty-four co-manufacturing clients and is in the process of working through a prospective client list with several more, he says.

“The food scene in Rhode Island’s really unique. There’s a lot going on here,” he says. “Not just restaurants, but manufacturers and people. I’m really excited about it. I think it’s going to be great. I think for Rhode Island to have this — and if we can get the head count up to about sixty-five people — I think there’s no question we’ll be the largest plant-based food manufacturer in the U.S.” 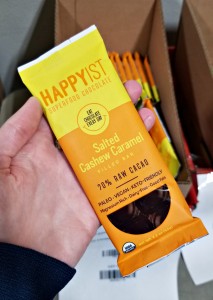 A Happyist chocolate bar ready to ship out.

In addition to manufacturing and office space, the building includes a test kitchen where clients can hone their recipes and a photography area for promoting brands. Lively says he’s currently renovating parts of the building to create more production space. He hopes the Lincoln facility will become a hub for plant-based companies nationwide.

As for the commute, it currently includes a ferry ride from Martha’s Vineyard and a long drive up from the Cape. Lively doesn’t mind. When he worked in the beef industry, he says, he often found himself flying out to the Midwest — where the cows were.

“I’m excited to be this close to home. I’m fifty minutes from the ferry,” he adds.