The rural village features a wealth of shops, galleries and eateries.

Just across from Aquidneck Island, on the other side of the Sakonnet River, sits Tiverton Four Corners, a quaint, functioning New England village with historic charm. The area, which was originally part of the Massachusetts Bay Colony, but is now part of a countryside coastal region in Rhode Island, is the site of several businesses, art galleries and more.

Rich in history and listed on the National Register for Historic Places in 1974, Tiverton Four Corners features shaker-style buildings — some new, many others old, dating back to the eighteenth century. Long before Four Corners was established as an art community however, it was home to the local Pocasset tribe of the Wampanoag Native Americans. Around 1629, Governor Bradford of the Plymouth Colony purchased the area from its original inhabitants, making the town of Tiverton part of Massachusetts. Almost 100 years later, the Four Corners area was measured, buildings were constructed, and the village was formed. It wasn’t until 1746 by British royal decree that the towns of Tiverton, Little Compton, Bristol, Warren and Cumberland were brought within the jurisdiction of Rhode Island. 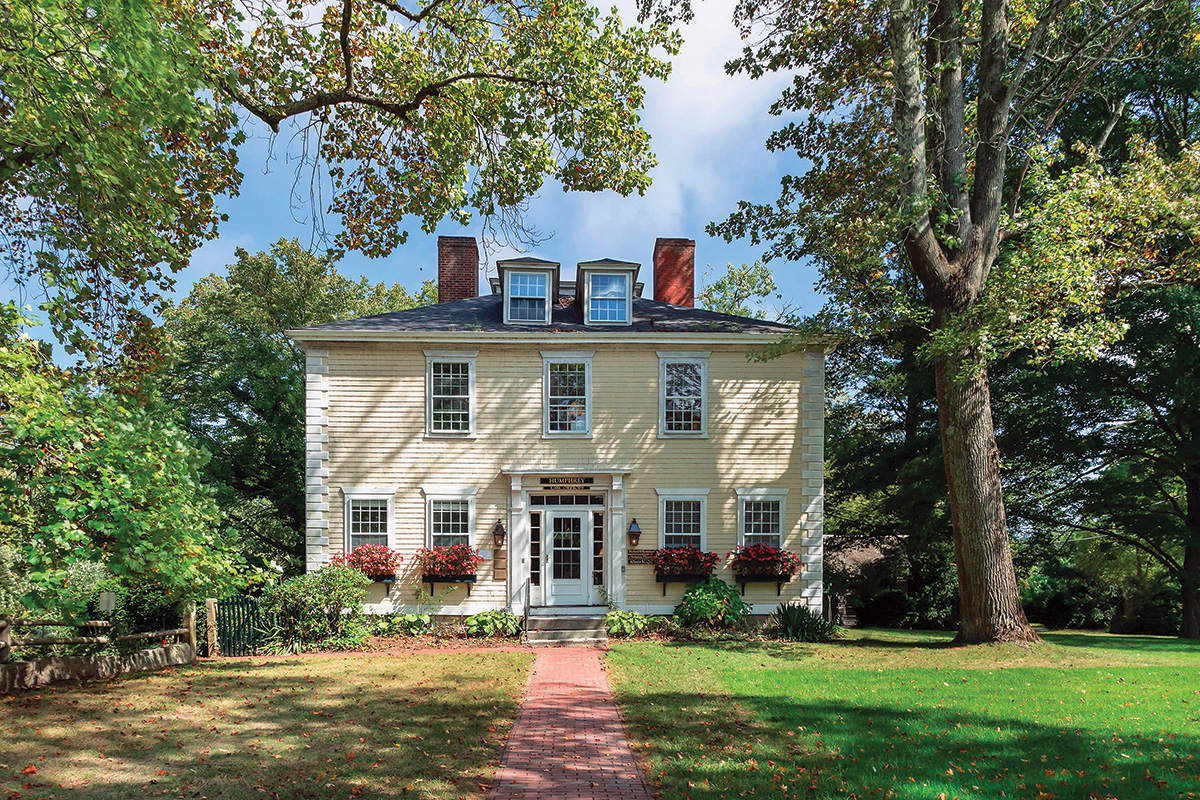 And for quite some time later, the village hosted generations of families who farmed the rolling green land around them. Fast forward to 1983, when Rosalind Weir and her late husband, Jim, along with Scott and Cindy Burns, purchased a few of the properties in Tiverton Four Corners. They began thinking about ways in which they could fix, improve and introduce commerce to the village, to make it a sustainable destination for folks.

“My husband was a very ambitious, visionary person,” says Weir. The concept was to take these mostly unused historic buildings, much like those in Sturbridge Village and Plimoth Plantation, and bring them to life, she says. “It was never really a grandiose idea and it was narrow in its concept because it involved bringing in people here to open businesses that wouldn’t go elsewhere, so it was quite local to this little corner.”

The Weirs and the Burns first began to revitalize the eighteenth-century village with the building that has housed the Provender sandwich shop, and the Soule-Seabury House, now the Arts Center, both of which are cornerstones of the Four Corners.

The Soule-Seabury House, built in 1770 on an eleven-acre parcel, is considered a landmark building in the area. The saltbox-style house originally belonged to a family of shipping magnates and housed several generations of the same family until the Weirs and the Burns purchased it. The upstairs portion of the stately federal country house is rented out as law offices, while downstairs functions as an art center and classroom. The Arts Center is a nonprofit organization that brings art, performances and exhibits to the region. 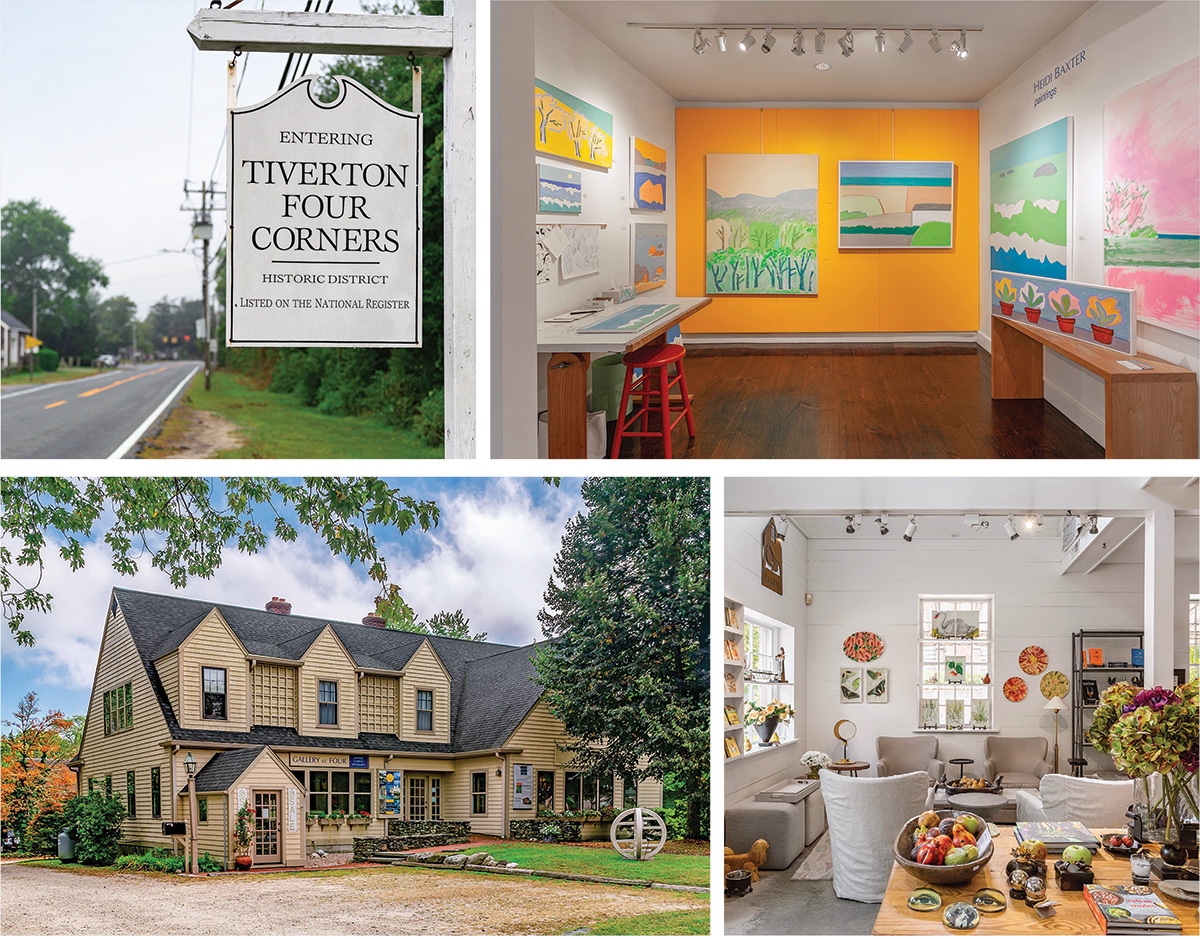 Tiverton Four Corners was listed on the National Register for Historic Places in 1974. The Gallery at Four features work from artists around the world and opened to the public in 2018. The Cottage features home furnishings and other decor. Photography by Sarah Farkas.

“When we bought the house, we debated different uses for it,” says Weir. “We thought about an inn, but that would have taken up the entire property with water, septic and parking usage. It would have swallowed up the town and deprived us of the opportunity to have so many other things happening here.” And so, their passion project began.

In 1991, the first art exhibit was held in a barn behind the Soule-Seabury House. People from all over came to see the art installation and suggested that the Four Corners would be great as an artistically driven area. Then, in 1993, the Weirs turned part of the Soule-Seabury House into the Arts Center. Over time, they purchased several other buildings to revitalize, and many artists who were attracted to the concept moved in. Now, visitors can peruse art galleries and studios, go antique hunting, grab a bite to eat at the Four Corners Grille, shop for home decor and other accessories and more, all while in the confines of the historic hub. This commercial hotspot, which is on the way to Little Compton and only a short drive from Providence, offers a unique experience for both tourists and locals.

“I hope that everyone feels that they can come enjoy this space,” Weir says. “And my hope for the future is that it will continue and people who want to make art and a small community work, will move in here and take over.”

To plan your own day trip to Tiverton’s Four Corners, check out the list of some of the local businesses and their stories below:

The Cottage
Although not historic, this property was originally a concrete block gas station built in the 1940s. It was converted into a retail store in the ’80s and is now a beautifully curated home furnishings store that sells pillows, blankets, rugs and more. However, the entire concrete block structure of the gas station still exists behind the shingled walls. 3847 Main Rd., Tiverton, 625-5814, thecottageri.com.

Gallery at Four
This contemporary art gallery offers distinctive and compelling exhibitions that highlight works from the studios of regional, national and international artists. The commercial property of this space was built in 1988 and housed retail businesses until the gallery opened in 2018, bringing modernity to the historic village. 3848 Main Rd., Tiverton, 816-0999, galleryatfour.com.

Four Corners Grille
Grab a bite to eat with menu options like lobster bisque, an applewood smoked BLT or chicken and waffles at this quaint but casual eatery. Plus, sip a brew or two or choose a glass of wine to pair with your meal. The property was built in 1940 and has undergone several minor renovations since. 3841 Main Rd., Tiverton, 624-1510, 4cornersgrille.com.

Union Public Library
The Union Public Library is the second oldest library in Newport County. It is a simple, one-story wood-shingled building that is a tiny, yet homey space for visitors to read and relax. The library was founded in 1820 by a library society, though the building it is housed in was not built until 1868 and was not purchased until 1914 for the space. It was originally a temperance hall. 3832 Main Rd., Tiverton, 625-6799, tivertonlibrary.org.

Arch Contemporary Ceramics
This ceramics studio opened in 2014 as a private studio with a pottery shop. It has since evolved to include a gallery space for ceramic artists. The shop features functional pottery and ceramic sculpture, from mugs to bowls to wall hangings and everything in between. The building is located just behind the old Soule-Seabury House in a quintessential structure that was constructed in the ’90s. 18 East Rd., Tiverton, 816-0550, archcontemporary.com.

Gray’s Ice Cream
Where the Gray’s Ice Cream building and parking lot sits was once the John Almy House. The house was built in 1797 but was demolished in the 1950s. This Gray’s location is open year-round and serves delicious homemade flavors like cookie dough, rum raisin, mocha chip and more. 16 East Rd., Tiverton, 624-4500, graysicecream.com.

The Cheese Wheel Village Market
This relatively new addition opened its doors in late 2018 and serves the community a comprehensive selection of artisan cheeses, gourmet charcuterie, jams and spreads, local honey, fresh eggs and much more. It is housed in an adorable roadside stand that was built in 1997. 3838 Main Rd., Tiverton, 816-5069, thecheesewheelri.com.

Mill Pond Shops
One of the oldest buildings in the area, constructed in 1870, the Mill Pond Shops consist of several small businesses including a new and used consignment boutique, a whimsy store called Courtyards, a handweaver studio and gallery and more. The two-and-a-half story building with two single door entries at each end was originally built as a public hall and then used as a grange hall after the grange society was organized in 1893. 3964 Main Rd., Tiverton, 816-0000, millpondshops.weebly.com.

For a complete list of businesses and things to do in Tiverton Four Corners, visit tivertonfourcorners.com.