Coming Home to a Remarkable Zinc House in Foster

A daughter returns to the Foster home that her father — and a team of RISD students and faculty members — built in 1972. 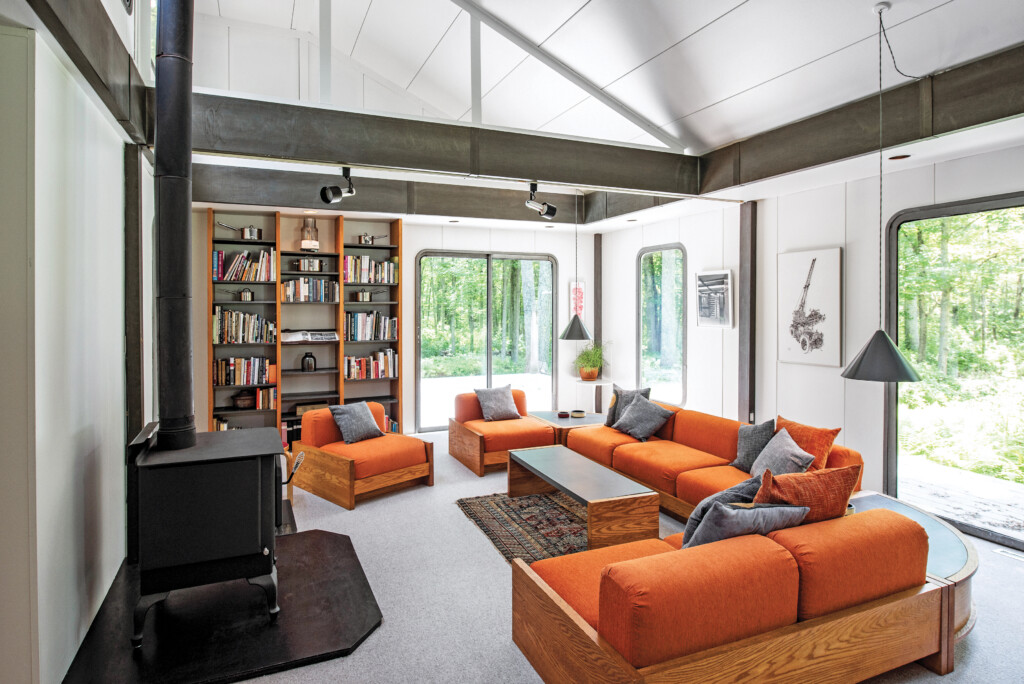 The living area of the ILZRO House features the original lighting fixtures, shelving and couch. Photography by David Hansen.

Just a few miles from the Connecticut border, in the woody expanses of Foster, lies a remarkable house made from zinc — perhaps the only one of its kind in the world.

The ILZRO House, as it’s known, was built as a prototype in 1972 by the International Lead and Zinc Research Organization and a band of RISD students and faculty led by professor Marc Harrison. And now, after forty years, the home is once again back in the family: Marc’s daughter, Natasha Harrison, purchased it in May 2021 and is restoring it back to its original grandeur, along with a few modern touches here and there. 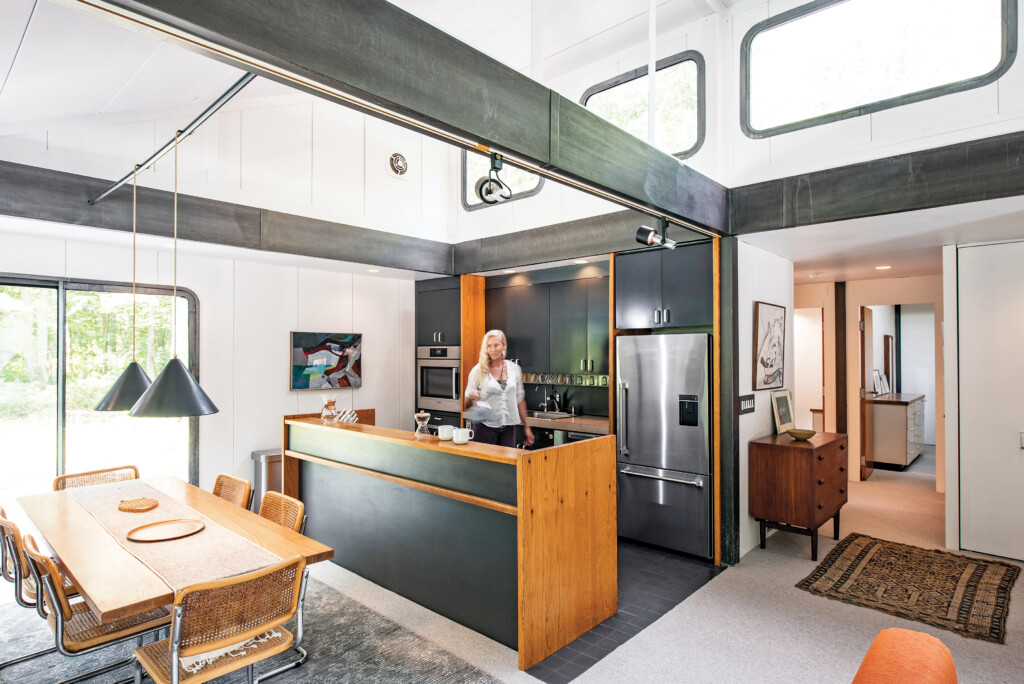 Natasha Richardson in the light-filled kitchen. Photography by David Hansen.

“We felt that we really needed to buy it and cement its identity,” says the Newport resident, “so that the history of the house could be preserved.”

The story begins in 1972, when the International Lead and Zinc Research Organization approached RISD with the idea of building an experimental home out of interlocking zinc panels that would serve as a prototype for other prefabricated homes. 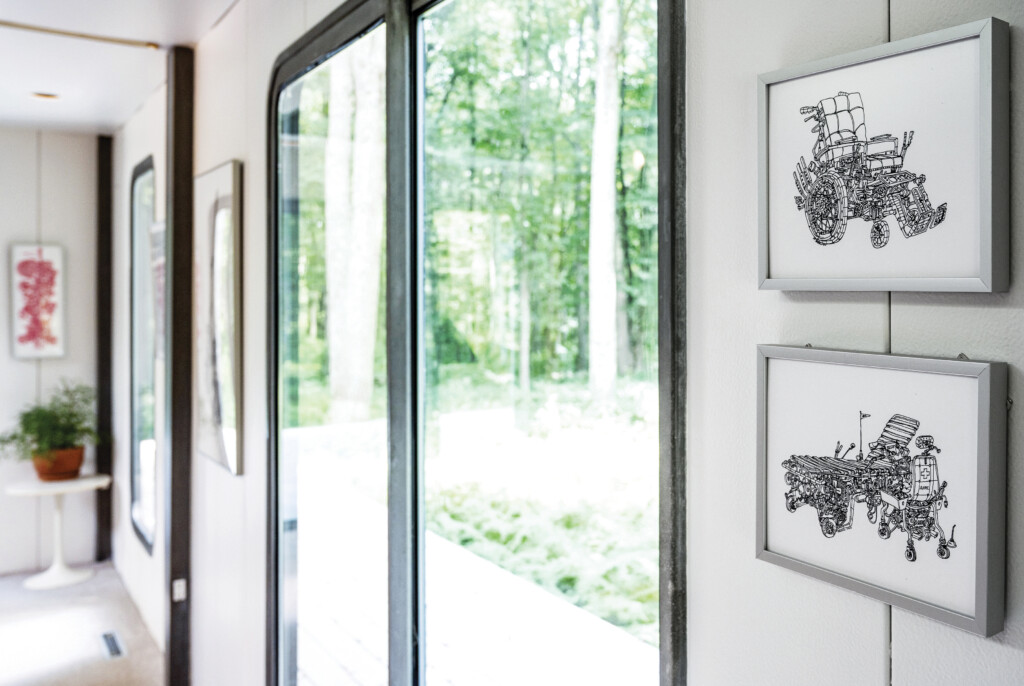 Magnets, not hooks, affix pictures to the metal walls. Photography by David Hansen.

Marc Harrison, in the midst of his forty-year career as professor of industrial design at RISD, gladly accepted. His young family already lived in Foster, so they took eight acres from their property for the build.

“That’s when he was happiest,” Natasha says. “When he was working together as a team with his students.”

Once finished, the 1,100-square-foot home had two beds, one bath, an open living and dining area and a detached garage. It was built with both energy efficiency and accessibility in mind; it was one of the first homes designed for both nondisabled and disabled people. In the kitchen, counters had two different heights and modular measuring and storage units above the sink that allowed for easy access. The sink plumbing was moved farther back so wheelchair users could fit their knees underneath, and a left-hinged door and pull-out counter underneath the stove allowed for easy access. Light switches, too, were placed lower on the walls and could be operated with a hand or a fist (unlike the tiny on/off switches commonly used during the seventies). 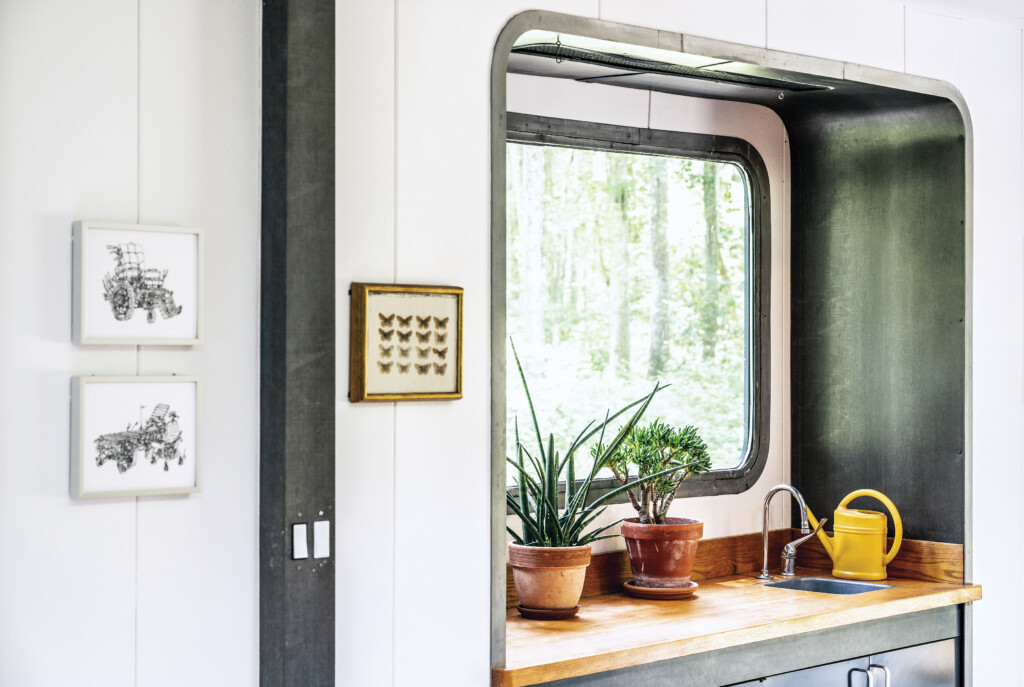 Natasha found her childhood watering can tucked into a cabinet after buying the home. She figured it was a sign. “OK,” she says. “I guess this was meant to be.” Photography by David Hansen.

The project sparked Marc’s interest in designing for all people. So, too, did a brain injury from a childhood sledding accident, which forced him to relearn basic skills like walking, talking and reading.

“Dad was really interested in designing for all people,” Natasha says.

In addition to his teaching, Marc also designed several products that could be used by people of all ages and abilities, hewing closely to the principal of Universal Design, which he helped pioneer. 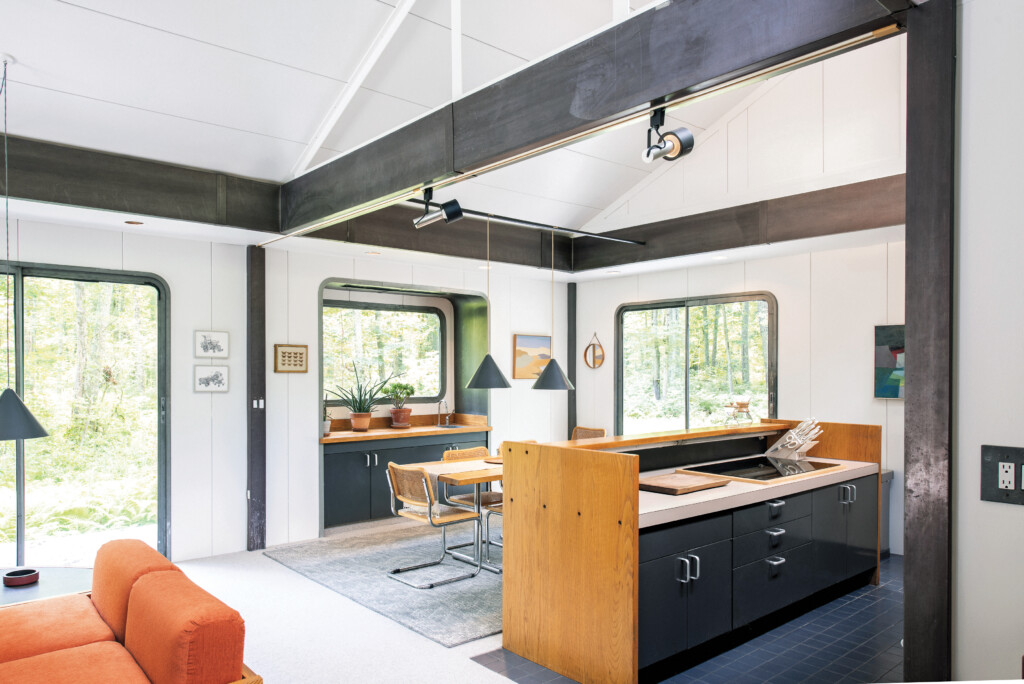 As the principal designer for Cuisinart, Marc redesigned the iconic food processor to make it easier to use, in addition to crafting cookware, a mini-chopper, coffeemaker and cutlery. He also designed the now-iconic Boston subway turnstile system, an IBM supercomputer and a retail lottery ticket sale system.

He died in September 1998 of amyotrophic lateral sclerosis, or Lou Gehrig’s disease. 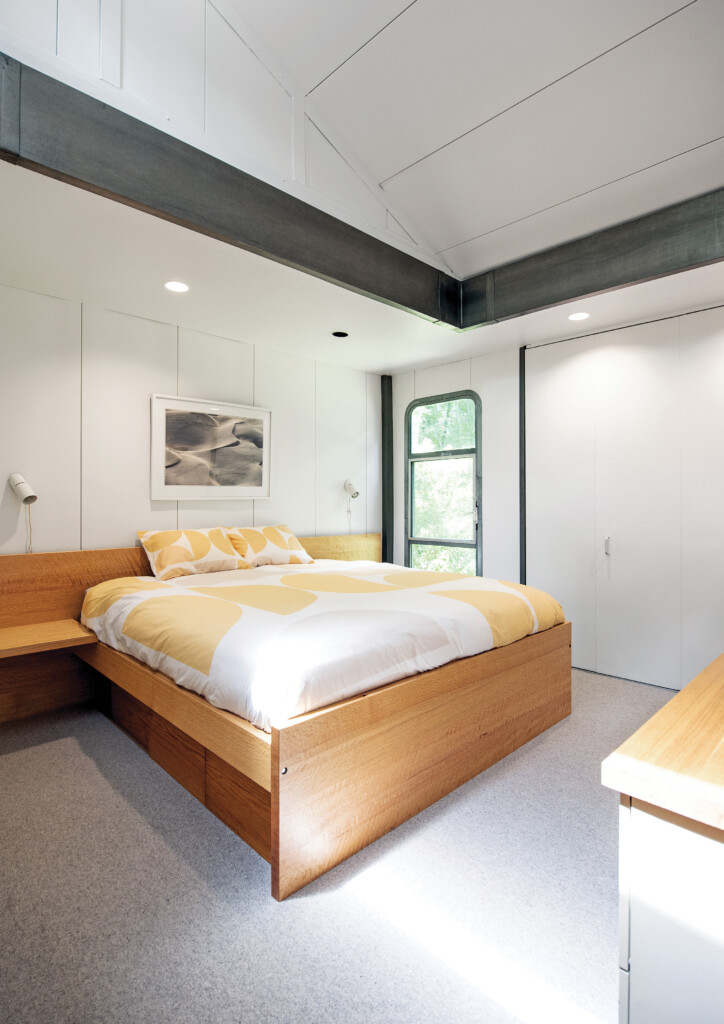 Ben crafted a king-size replica of the original full-size bed in the master bedroom. Photography by David Hansen.

“The irony was not lost on him,” Natasha says of the disease that robbed him of his ability to walk, move and speak. “It was an opportunity to understand what he’d been trying to design for all throughout his career.”

Once finished, Marc and his family spent time in both the ILZRO and nearby family home before moving to Newport in 1978. That’s when fellow RISD professor Lorraine Howes bought the ILZRO house, living in and preserving the home for the next four decades.

In 2021, she contacted Natasha, saying she was selling the house and wanted Natasha to have it. Natasha and her husband, Ben Randall, closed on the property in May 2021. They credit Howes for taking such good care of the home — almost everything, including the original fixtures, furniture and design — was kept intact.

“She was a wonderful steward of the home,” Natasha says.

Since then, Natasha and Ben have been tackling home projects here and there. Ben is a woodworker who’s involved in historic preservation, so they’ve been able to do much of the work themselves.

They ripped out carpet from the kitchen and bathroom and swapped out the color of the couch cushions from a “very seventies” rust-colored red to a gentler burnt orange hue.

“I agonized a lot over that,” Natasha says. “I really tried to keep the intent of the house intact. I’d think, ‘What would Marc do?’”

The original bath was renovated in 1980. Natasha and Ben updated the room, taking out the tub and turning the space into a large roll-in shower, based on what they thought Marc would have done. 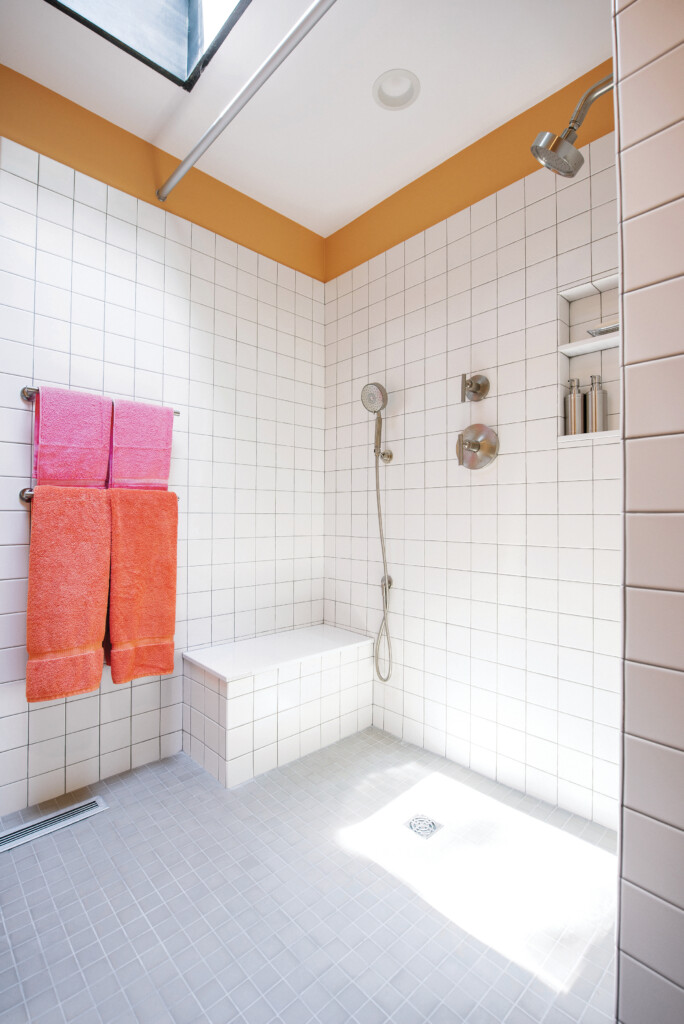 The owners also removed a tub from the bathroom. Photography by David Hansen.

In the kitchen, they found replacement measuring and storage units on eBay. Some were missing and one had been warped, the victim of a nearby toaster. In the bedrooms, Ben made a king-size replica of the original full-size master bed and made a queen-size bed for the second bedroom.

During the renovation, they’ve turned to a book ILZRO published about the home for reference. They also removed twenty trees and added landscaping to the overgrown property and a driveway.

Once finished, Natasha would like to rent out the home for short-term stays, perhaps as a retreat for artists and professors and others who want to learn more about the house. She’s not interested in listing it on Airbnb for nightly or weekly rentals — she’d rather save it for people who are intrigued by the home’s one-of-a-kind qualities. 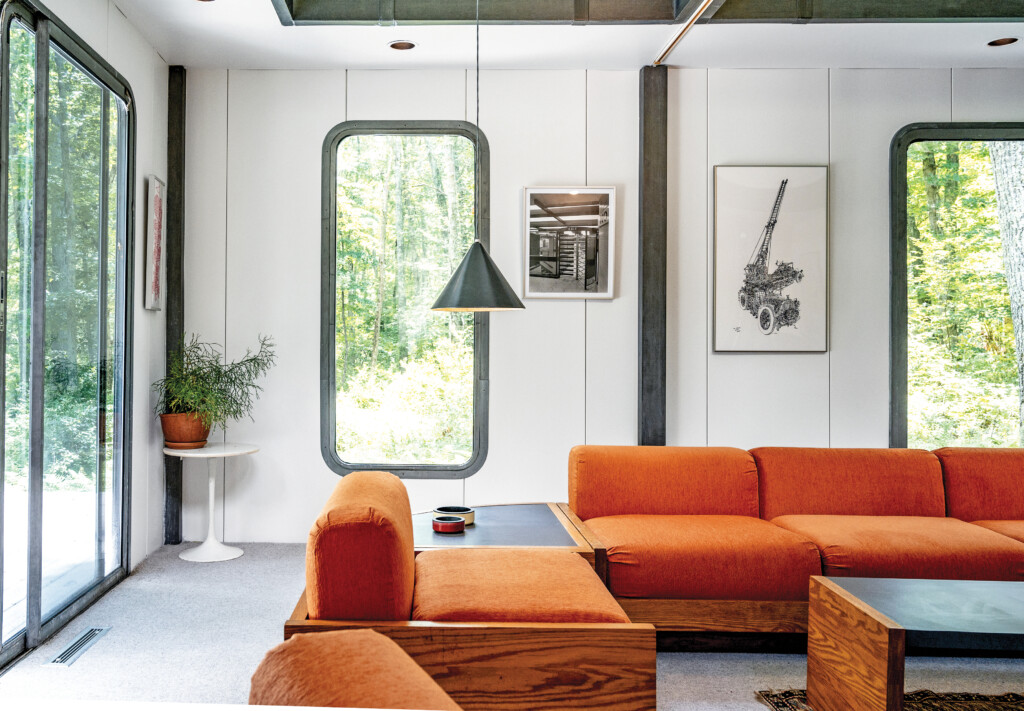 They livened up the couch with more modern hues. Photography by David Hansen.

“It’s too fragile and special,” she says.

She thinks her father would be proud of their efforts to restore the home. “This house was a significant moment in his career. As a professor, he loved working with groups — that was really his style. He always wanted to collaborate.”

He was a “goofball, and a great guy,” Natasha says, always ready with a joke or a laugh.

“Being here has been extremely sentimental. We both miss him.” 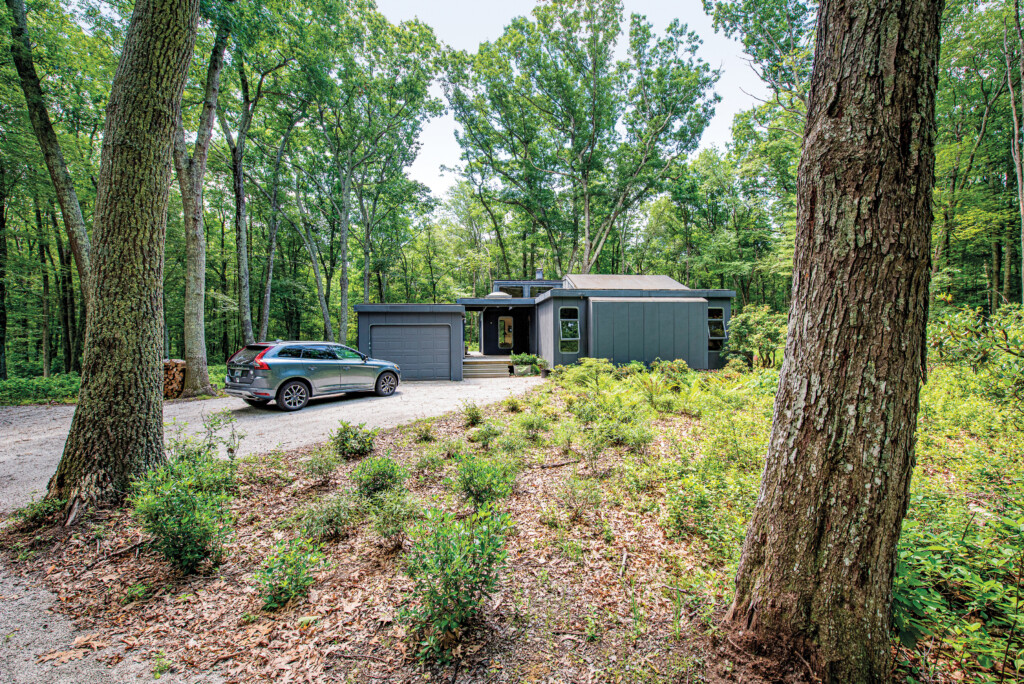 Natasha and Ben added plantings and a driveway to the exterior. Photography by David Hansen.