What Happens After You Donate Blood?

We went behind the scenes at the Rhode Island Blood Center's state-of-the-art laboratory to learn how blood makes it from donor to patient. 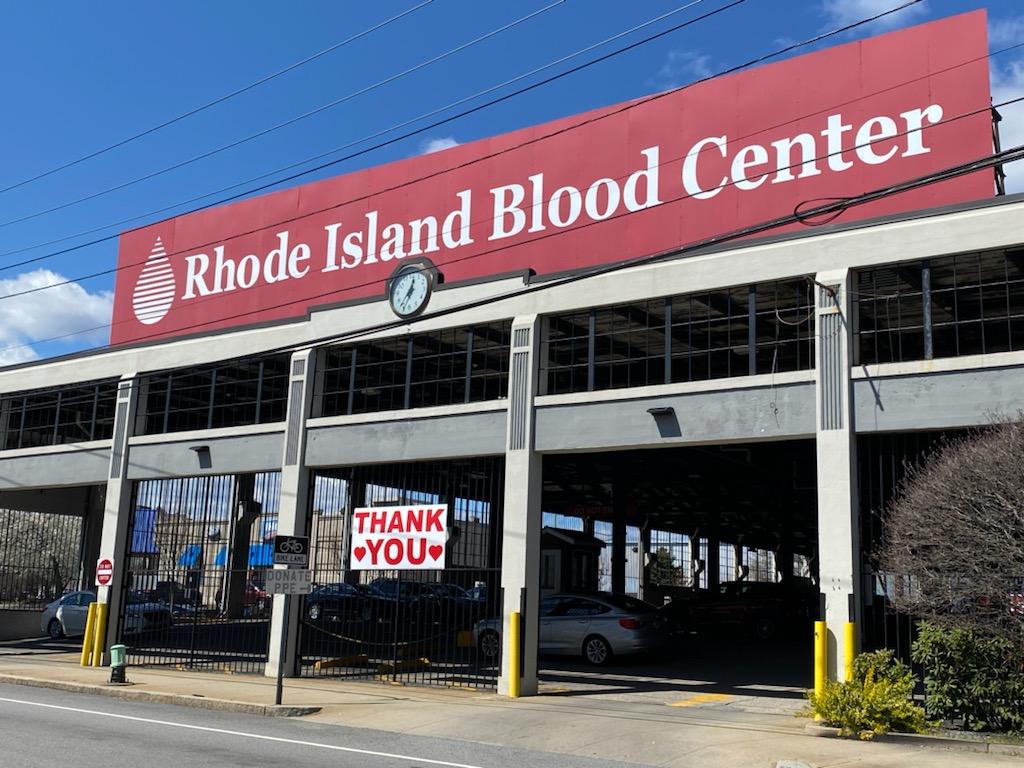 Whether you’re a regular blood donor or a first-timer looking to make a difference, the process for donating blood in Rhode Island follows a similar routine.

You arrive at a blood drive, or one of the Rhode Island Blood Center’s six donor centers around the state, and check in. A brief screening questionnaire and finger stick later, and you’re sitting in a reclining medical chair chatting with a donor specialist as they prepare your arm for donation. As the needle slides in, you remember the patient in need on the receiving end, and the temporary discomfort is instantly worth it. A short time later and it’s off to the refreshment area for juice and cookies, another successful donation complete.

As you munch on Oreos (or, my personal favorite post-donation snack, Fig Newtons), it’s easy to forget about the pint of donated blood you left behind. After all, donors don’t have to follow up on their blood donation unless they get sick, and everything eventually ends up with a patient, right? As a regular donor, I was curious where my blood went after being whisked away by donation staff, so I called up the Rhode Island Blood Center to find out. As it turns out, the organization owns a state-of-the-art testing and processing center in Providence, where a laboratory staff of 75 works round the clock to keep hospitals supplied around the state.

“There are trauma and there are unexpected things that we actually have to get blood to them quicker,” says Kara LeBlanc, marketing and communications manager for RIBC.

On a Thursday afternoon in March, the laboratory is bustling even after the donor center next door has locked up for the day. For most donors, their first interaction with RIBC will take place in a donation area like the one inside the Promenade Street complex. Here, different types of donor setups show the different ways people can donate blood. Most people donate whole blood, but you can also donate platelets, plasma or double red cells. In these types of donations, a machine separates the specific component before returning the filtered blood to the body.

Platelets are used for clotting, so they’re an important product for people who are battling cancer, explains LeBlanc, who donates platelets once a month.

“There’s no shortage of people battling cancer or getting into car accidents, so there can’t be a shortage of these,” she says. 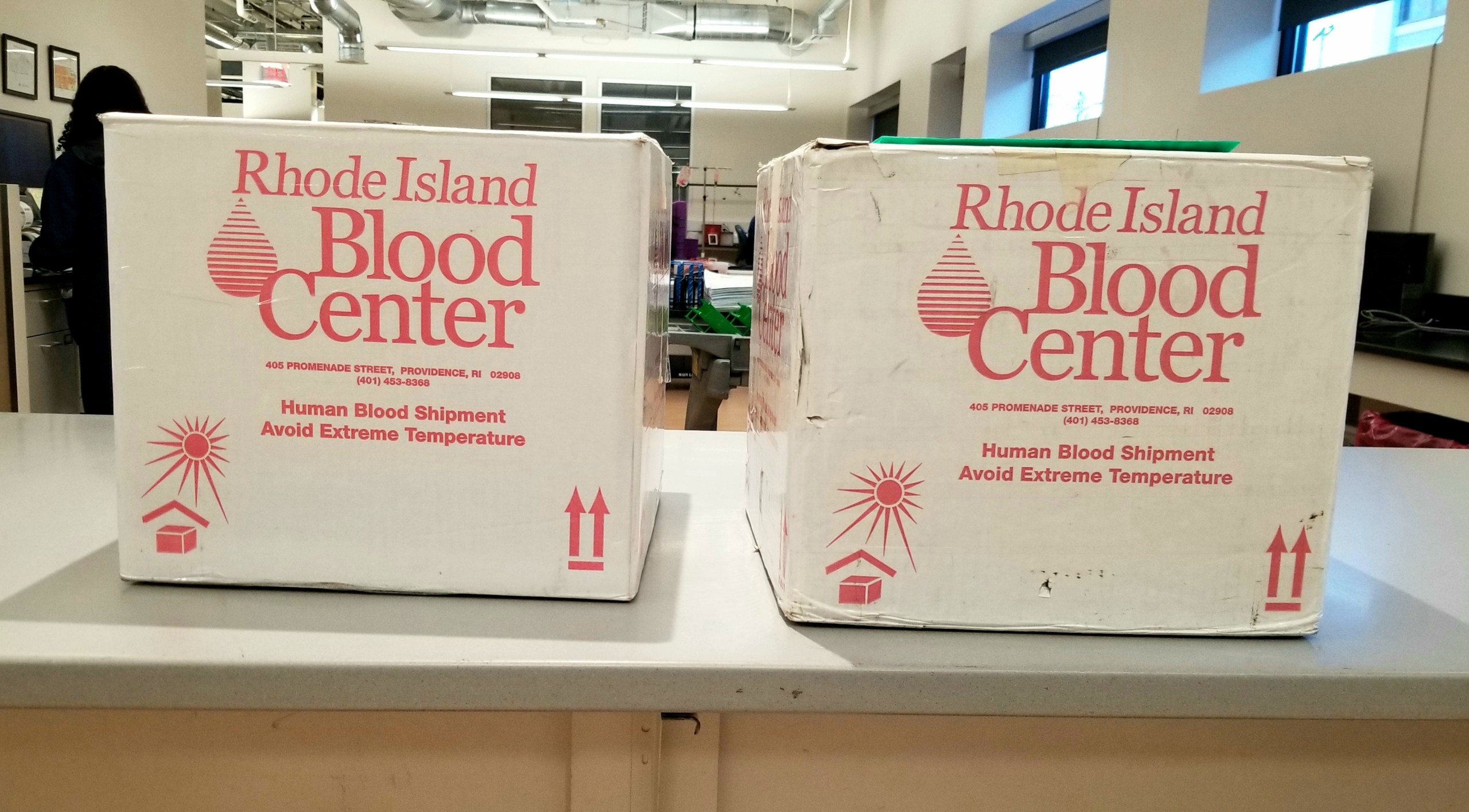 Blood arrives to the laboratory.

During the early months of the COVID-19 pandemic, the center also collected convalescent plasma from people who had recovered from the disease. LeBlanc says they’ve stopped those collections, as the plasma is no longer in demand now that there are more options for treating COVID-19.

“Hospitals were literally calling and begging for convalescent plasma because they didn’t know what to do to address the surge,” she says.

After a donation, the blood samples are wheeled next door to the laboratory, where they’ll undergo a lengthy testing and preparation process. A whiteboard in the building’s entryway lists that day’s drives and open donor centers. Volunteer and staff drivers pick up blood throughout the day and deliver it to the lab to avoid a testing backlog at the end of the day. On this day, a drive is taking place on Block Island, and one shipment has already arrived to the lab earlier in the afternoon by way of the Westerly State Airport. As we examine the board, Justin Madden, a staff driver, arrives with a second shipment from Block Island after catching the 2 p.m. ferry.

“I try to do it every two hours if possible so the lab doesn’t get bombarded,” he says. 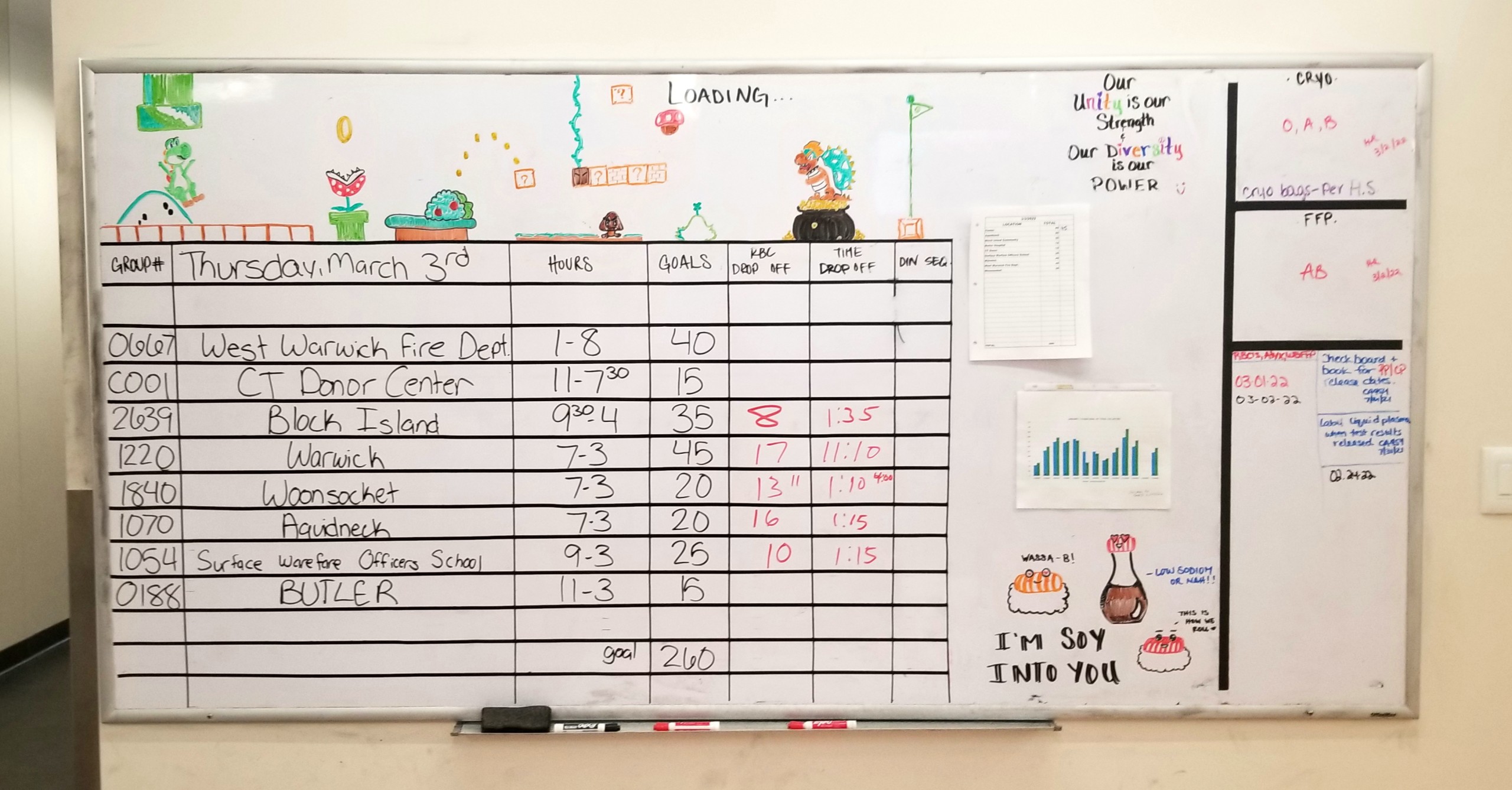 A whiteboard keeps track of the day’s blood drives.

Staff members also have to keep the blood from going bad, packing it on ice when it comes from further away. In addition to Rhode Island donations, the lab processes testing samples for sister centers as far away as New York. Since 2019, the Rhode Island Blood Center has been a part of the New York Blood Center Enterprises, an umbrella organization that includes blood centers in New York and Connecticut. These centers do most of the processing at their home locations but send samples of blood to Rhode Island to be tested. 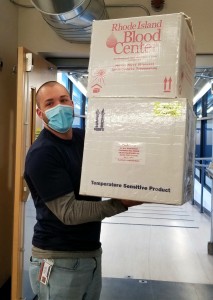 As we move into the testing area, blue-coated laboratory workers are busy preparing samples. The lab operates twenty-four hours per day, seven days per week, including on holidays like Christmas and Thanksgiving. According to LeBlanc, this is to keep the testing process moving to avoid a shortage at area hospitals. The lab processes more than 400,000 samples every year between Rhode Island and other communities’ blood centers.

“This is when the lab comes alive, second and third shift,” she says.

According to Jill Alberigo, director of laboratory services, the lab tests samples for diseases that can be transmitted via blood transfusion per the requirements of the United States Food and Drug Administration. These include well-known viruses like HIV and hepatitis B, but also include infections such as syphilis, West Nile virus and babesiosis. When a sample tests positive for a virus, a hold shows up in the center’s computer system, and a staff member will pull the blood product for review later in the process.

At the same time as staff is testing small samples of the blood for disease, other staff members are preparing the larger blood bags for transfusion. While most blood comes in as whole blood donations, hospitals often transfuse only the component of blood that a patient actually needs, so RIBC separates the blood into its individual components before sending it out. This happens in a centrifuge, where the machine spins the whole blood until the red blood cells separate from the plasma.

“Most of our plasma we then further manufacture into cryoprecipitate and cryo-reduced plasma,” Alberigo says, naming products used as blood clotting treatments. 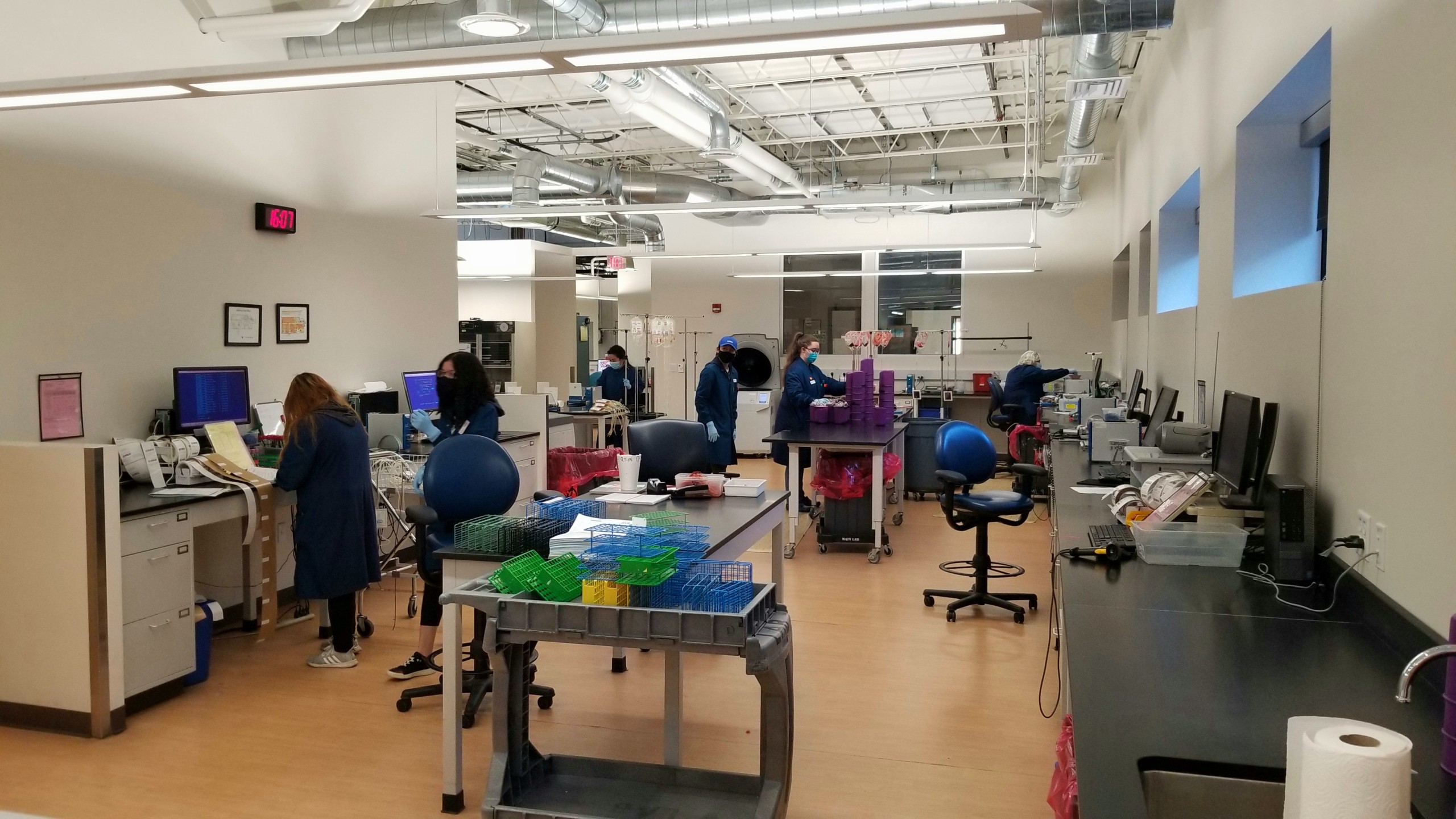 Laboratory staff test and prepare the blood at RIBC.

Plasma can be frozen for up to a year, and red blood cells are stored in temperature-controlled refrigerators for up to forty-two days. The hospital services room at RIBC contains drawers of red blood cell bags stored according to blood type at 3.8 degrees Celsius. Platelets have a five-day shelf-life and must be kept in constant motion to keep them from clotting, so RIBC staff store them on special “agitators” that keep them from clotting on the shelf.

Most of the products ship out well before their expiration dates. LeBlanc says the organization tries to keep a five- to seven-day supply of blood on hand at all times. Levels below that trigger special appeals for new blood donations, as happened once in January and three times last year.

“That’s when we’re down to a level where we’re scared,” she says. 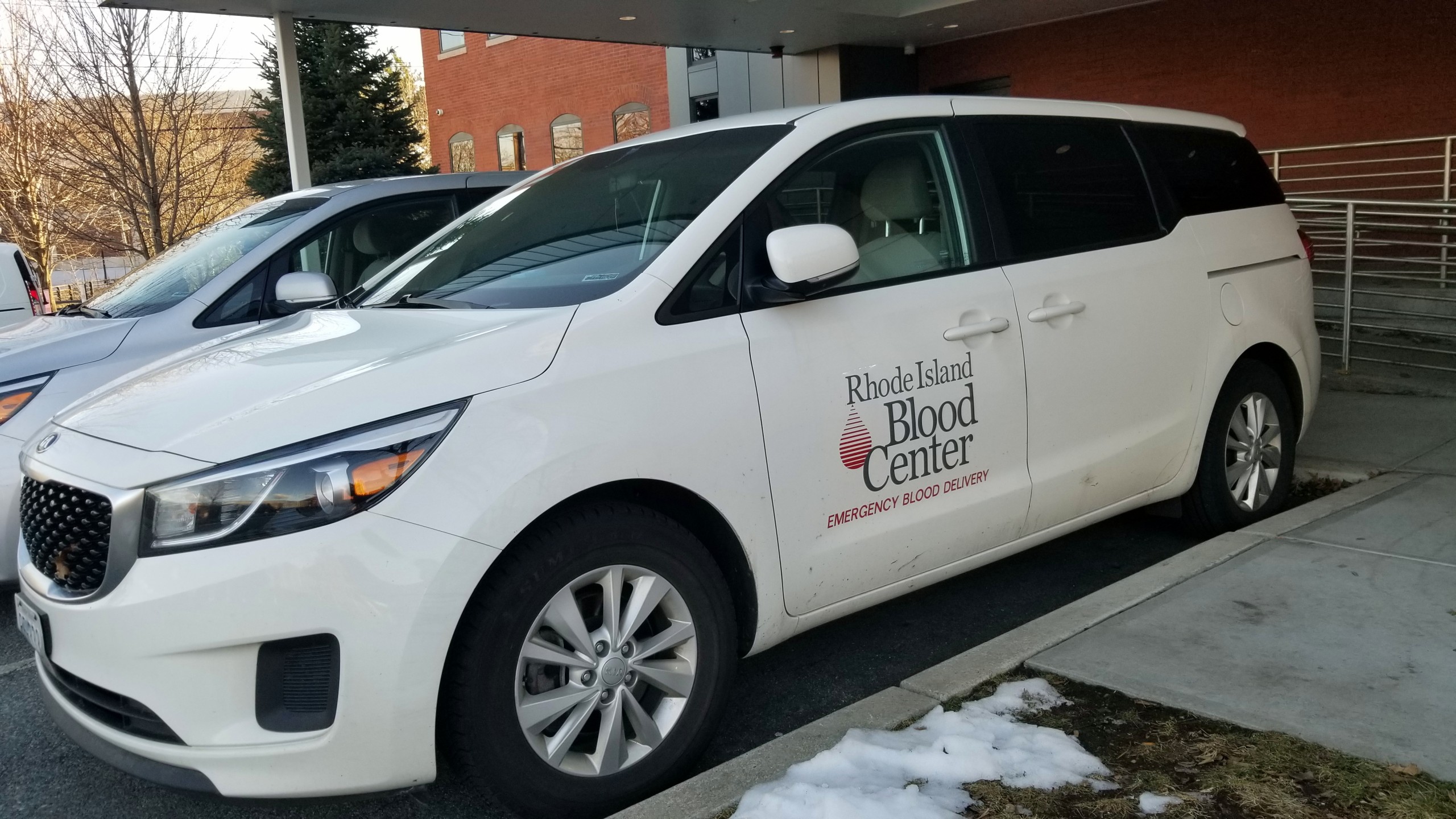 Blood is delivered to local hospitals in vans like this one.

Drivers pick up the boxes outside the storage area and deliver them to local hospitals, where the blood will be stored in onsite blood banks. RIBC services all hospitals in the state except Fatima Hospital and Roger Williams Medical Center, which have arrangements with other blood providers. RIBC is a nonprofit organization, but hospitals pay a fee to cover the overhead costs of processing and delivery. Those costs are typically passed onto insurance companies.

Inside, other employees continue to process and test blood samples for delivery. The RIBC lab operates year-round, even when no blood collections are happening. More than 100 volunteers supplement the work of employees by helping with tasks such as delivering shipments and overseeing refreshment areas. It’s a massive operation, all to ensure that when Rhode Islanders find themselves in need of blood in an emergency, it will be there.

To learn more about giving blood or find a donor location, visit ribc.org.

Spring into Your Best Self with These Easy Tips