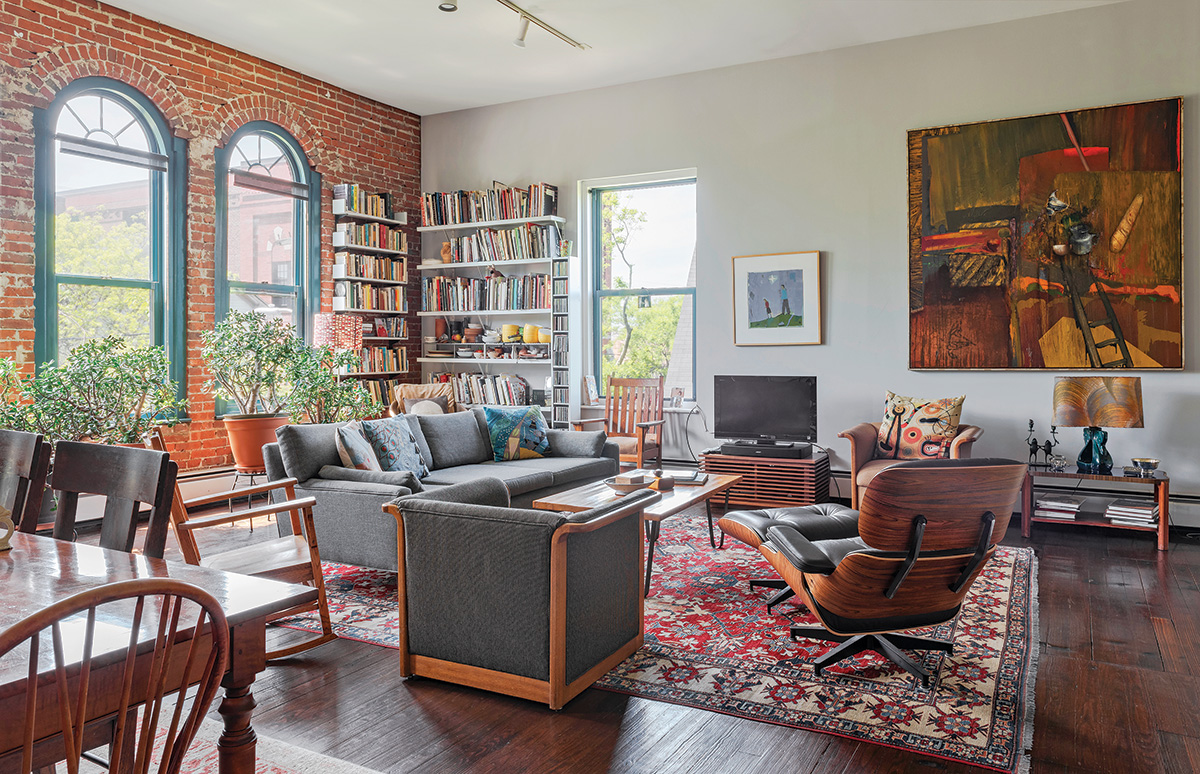 The coffee table, made of reclaimed materials, is one of two pieces the Frazers commissioned local firm Christian Thomas Designs to create. Photography by Elaine Fredrick

Transformative Years
Plainly stated, the West Side is a really cool part of Providence. Flanked by Routes 6 and 10 on the west and I-95 on the east, the cityscape south of Broadway and north of Cranston Street has experienced its own revival in the past thirty years. The area that was once solely defined by the Hill is now a destination for artists, foodies, hipsters, professionals, students and retirees to mesh, visit and nest. The West Broadway Neighborhood Association (WBNA) organizes business and residential events throughout the year ranging from professional, after-hours gatherings to neighborhood clean-ups and bilingual adaptations of Shakespeare in Dexter Park.

When RISD professor David Frazer bought the former Harrison Street Firehouse Annex in 1988, the area, and the annex looked vastly different. The lower windows, including the arched entryway once used by the annex fire truck, were bricked up and the building was covered in graffiti, neither of which bothered him terribly. 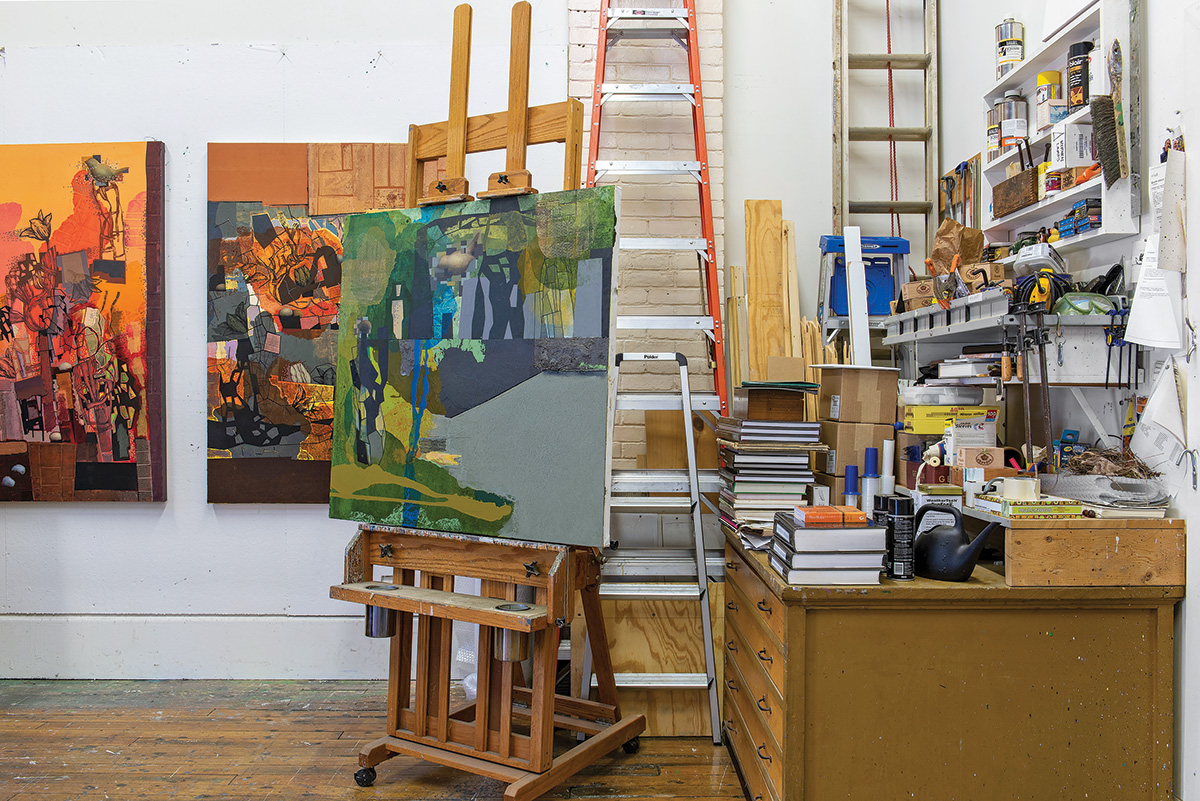 Lofty Ambitions
“I was only looking for a studio building,” he says. “The neighborhood was kind of a disaster.”

In 1995, Frazer’s job with RISD took him and his wife, Anneke, to Rome for three years. When they returned, the neighborhood had transformed. The Frazers sold their East Side home and moved (“we thought temporarily,” he says) into the annex until they found a house in the neighborhood that they really liked. Eventually they realized they already owned one.

Today the building’s floor plan closely resembles the original, minus a couple of fire poles, and twenty-eight hidden solar panels on the roof, secured with a grant written by the WBNA, supply the building’s electricity. The majority of the upstairs living space is lofty and open; the kitchen has taken the place of the equipment lockers. Original hardwood floors, high ceilings and a brick exterior wall punctuated by arched windows give the space a sense of its roots. Although Frazer had initially hoped to keep the downstairs open as well, practicality drove him to divide the level into two spaces. A separate apartment occupies the front and his painting studio is located in the back.

Frazer says the home/work arrangement is ideal. “I’m so happy to have my workspace in my building, but not directly connected to where I live. I have to go down the stairs, out the door and around the back to get to my studio. There’s something really terrific about having that little bit of distance. It just feels really, really right.” 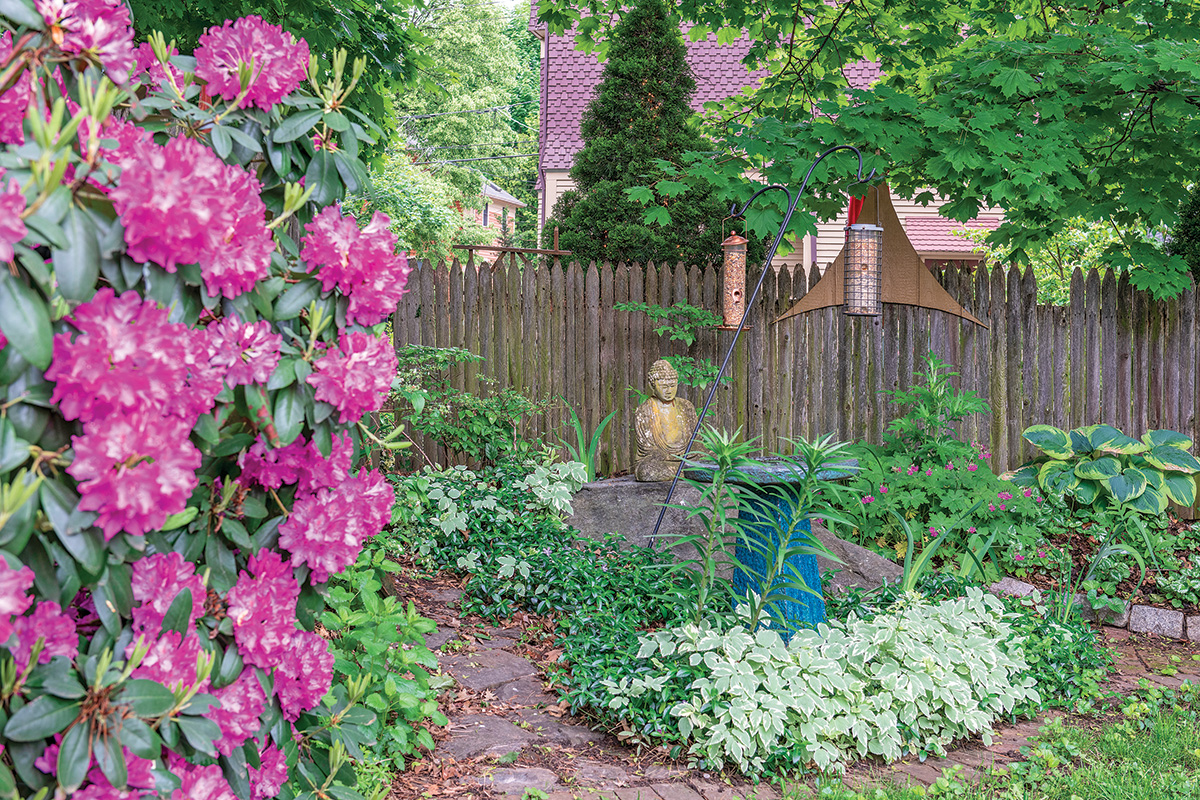 A Buddha garden, a carryover from Worthen’s former home in Richmond, offers a space for quiet contemplation. Photography by Elaine Fredrick

Urban Oasis
Are Rhode Island commuters spoiled? Maybe, but anyone who’s done it knows that trekking daily from rural Richmond to Providence and Pawtucket is cumbersome. In 2006, after twenty-two years of making that trek, Nancy Smith Worthen was ready to ditch the drive but not her greenspace.

“On the East Side it’s hard to find a house that has a tiny bit of land,” she says, which is why she ventured west. “Having had three acres and a big garden, I at least wanted a place where I could have some flowers and some vegetables and some sunshine.” West Broadway had all three.

“It’s just a pretty neighborhood, and I fell in love with this house.”

Worthen’s affections are justified. Built in 1992 by the Armory Revival Company as part of an initiative to rehabilitate the area, the home’s happy, golden hue and Gothic revival details give it virtual dollhouse-charm. Paired with a yard that she could mow in an hour rather than a week, the property was an ideal spot to relocate. 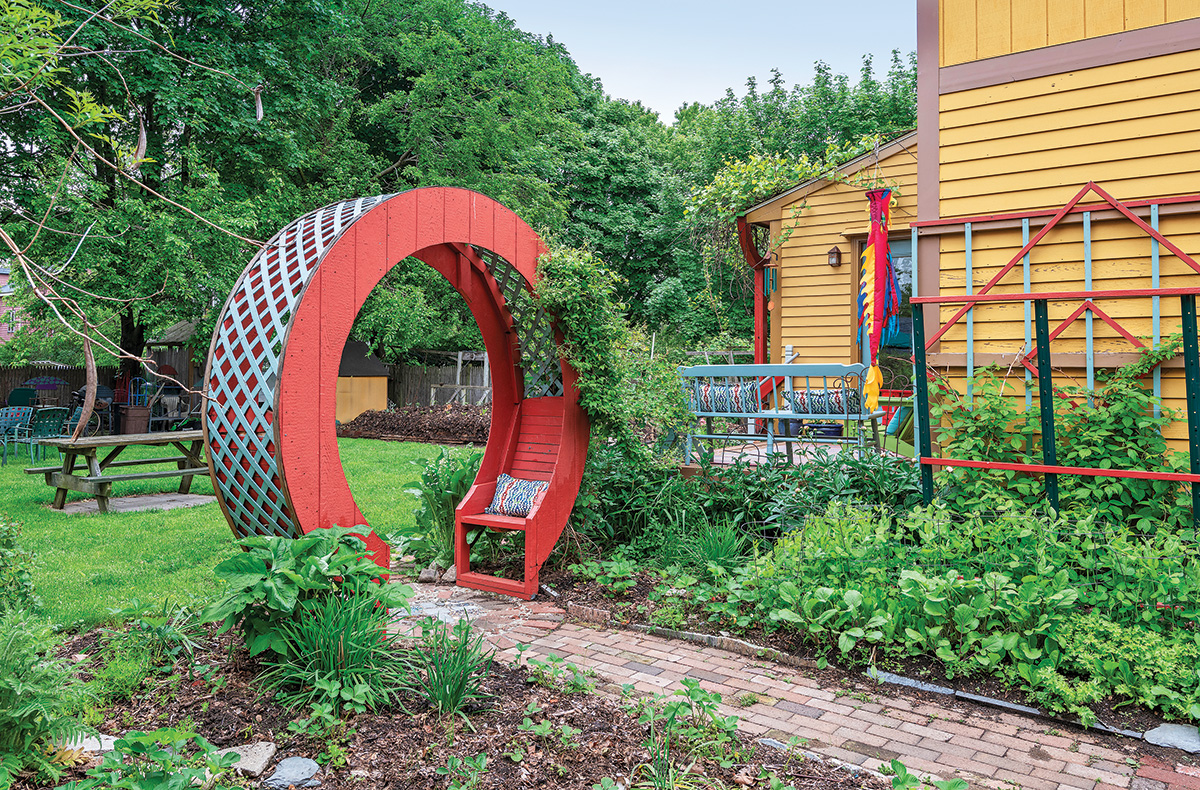 Color Their World
In the twelve years since, Worthen and her partner, Barry Schuman, have transformed the backyard into something of a mini urban Wonderland.

“I was trying to create an oasis, this sense that you’re in this magical place that’s separate from the busy city life,” explains Worthen. Mission accomplished.

The entrance is defined by a striking circular arch that Schuman designed and built. A retired shipfitter, he has lent his carpentry skills to other yard projects as well: there are trellises for clematis and other climbers, a grape arbor, two garden sheds and a chicken coop. Clusters of plants define the periphery, adding pops of color and lush greenery throughout the growing season. In early spring, daffodils, tulips and irises break through the soil. Eventually, the cherry and crabapple release their blossoms, creating a “pink rain of petals” in the yard, says Worthen. Fleeting rhododendrons peak and pass, allowing peonies to take center stage before hydrangeas and roses get their turn.

“Honestly in this neighborhood, when I’m upstairs in my bedroom, I see trees. I don’t see an urban landscape,” Worthen says.

Who knew the view from the West Side was so green.