Davison Bolster is featuring twenty of his pastel paintings during the month of November at the Coffee Depot in Warren. 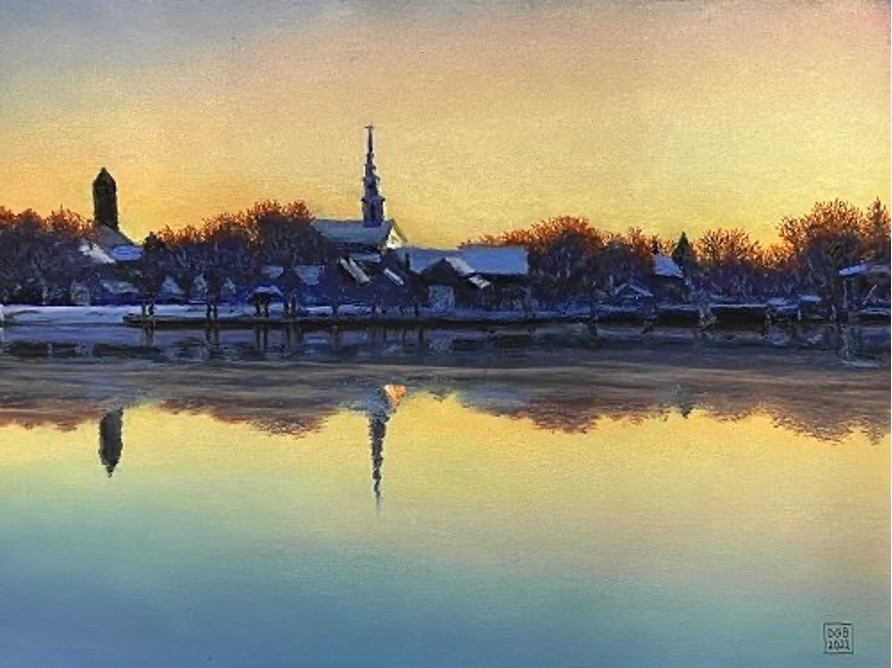 Davison Bolster has always loved art, but he didn’t follow in his grandfather’s pastel-painting footsteps until recently. When his grandfather, Gilbert Davison Johnson died in 1967, Bolster inherited his wooden boxes of pastels procured in the 1900s in France. He didn’t use them for fifty-five years, until now.

During the pandemic, Bolster became reacquainted with the pastel boxes from decades past. He decided to test out the new medium and mastered the pastel technique by teaching himself. 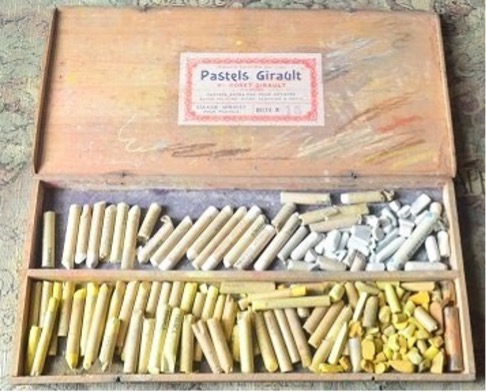 “Gil’s Yellows and whites box, Pastels Girault” Artist’s collection, a depiction of Bolster’s pastels from France, inherited from his grandfather.

Now the Warren fixture and artist is presenting an exhibit of his pastel paintings for the entire month of November at the Coffee Depot in Warren. The show, “Our Beautiful World,” features twenty of his most recent pastels as well as his grandfather’s ninety-five-year-old waterfront village painting that inspired the artwork. There will be a public reception on Sunday, November 6, from 1-4 p.m. at Coffee Depot, featuring acoustic guitarist Bob Demers from Little Compton. The pastels have been framed by Allerton Framing in Bristol and will be for sale, along with prints and cards of each one. 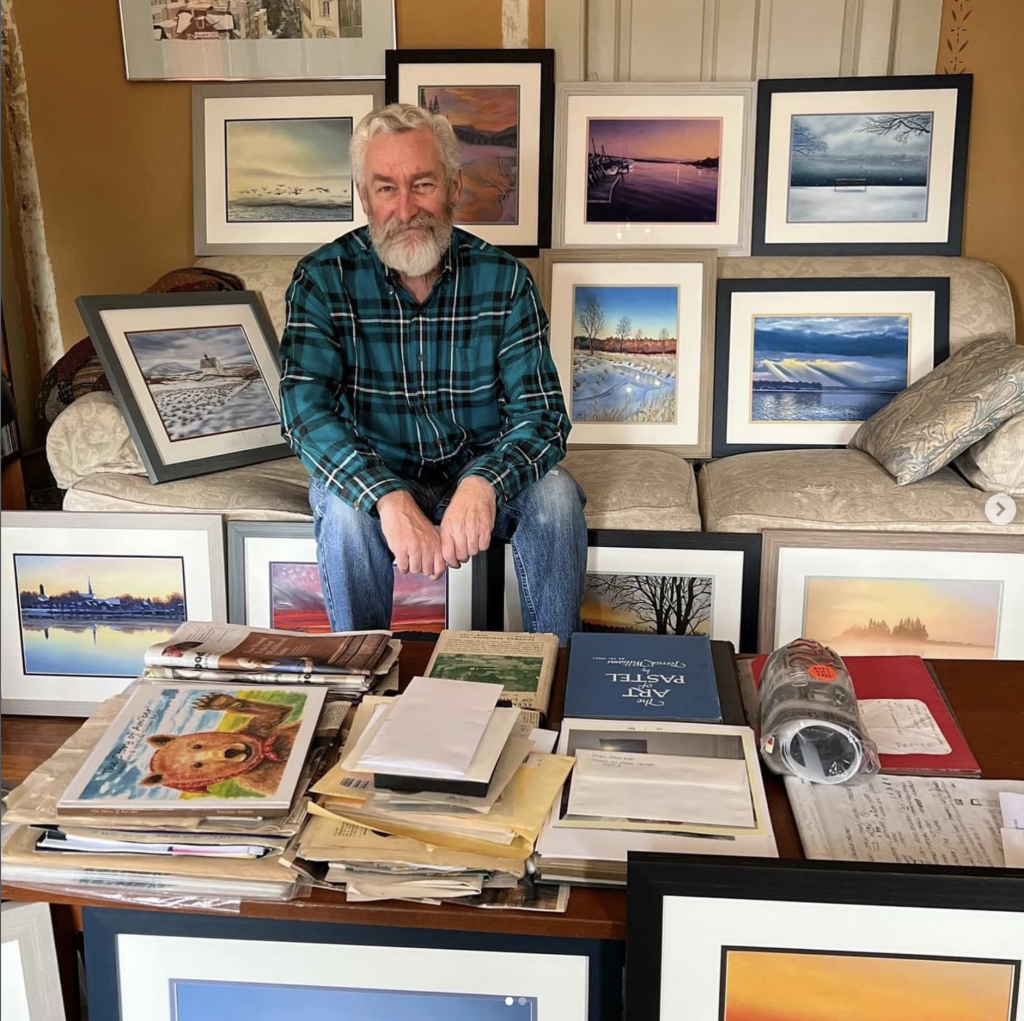 The pastels are worthy of a story themselves. Bolster’s grandfather, Illinois native Gilbert Davison Johnson, fought with the artillery in France during World War I until the end of the war in 1919. It was in France where he purchased multiple boxes of the pastels labeled in color-sorted wooden containers marked Pastels Girault. He took the boxes back home, and then adopted art as a therapeutic hobby after the war. Bolster used some of these pastels in his current day artwork, and is showing the oldest known painting of his grandfather’s from 1927. It’s a painting of a small village, probably in France. 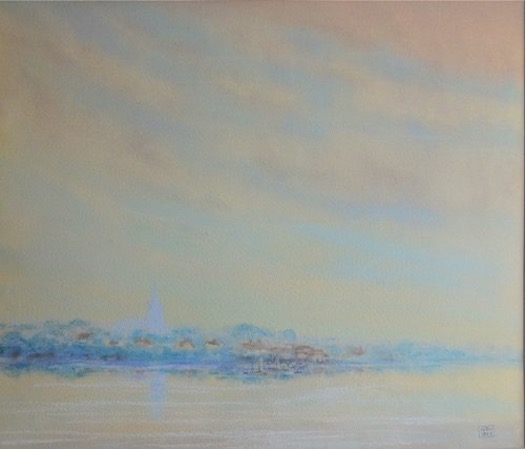 The family’s connection to Rhode Island goes way back too. Bolster’s grandfather and his wife, Gladys Elizabeth Hyde, moved from Long Island to Barrington in 1960 to live with Bolster’s mother, Beverly, and her husband, Donald, as they raised their two sons, Davison and Gilbert.

Davison loved watching his grandfather paint in Barrington and naturally picked up the talent as a child. He declared he wanted to be an artist in kindergarten, then went on to pursue art at Rhode Island School of Design and Massachusetts College of Art, but he focused on oil and watercolor painting. As an adult, Bolster owned a Warren art gallery, joined the Bristol Art Museum Board of Directors, and was appointed by the Governor to the RI State Council on the Arts from 1988 to 1993.

Bolster is very involved in the town of Warren and has served on the town council. He is also renowned for doing monthly chalkboard paintings at the Coffee Depot since the fall of 2020. He printed one of his holiday/winter scenes from the chalkboard to sell as cards and prints. 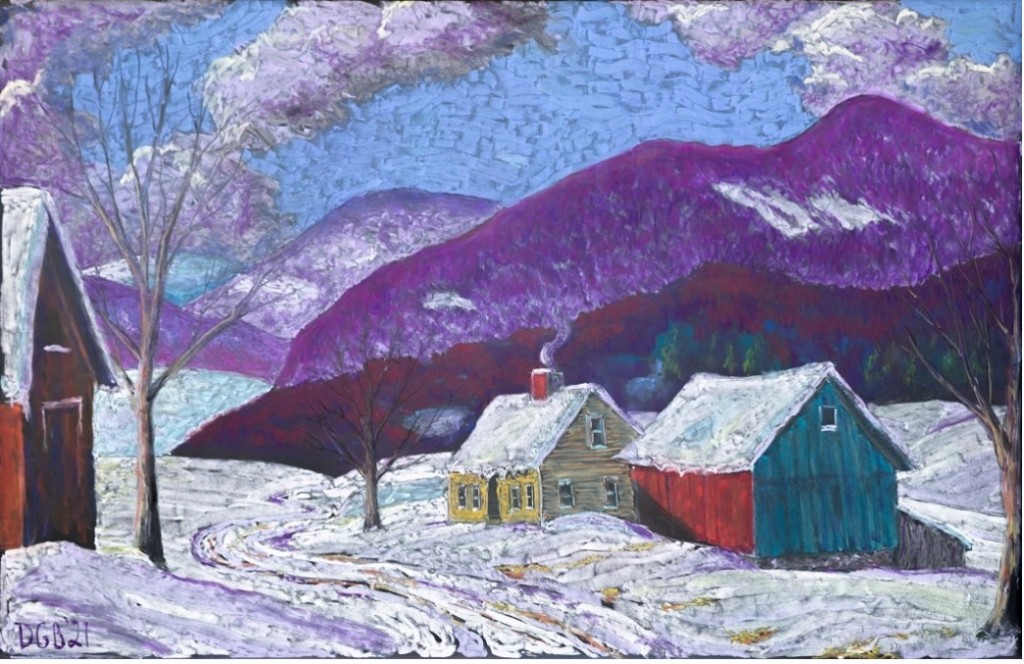 “Winter in New England,” Bolster’s chalkboard painting at Coffee Depot that inspired it all.

It was this chalkboard painting that inspired him to learn how to master his grandfather’s pastels. He read his books and watched videos to instruct himself on the technique, then he painted his first masterpiece, a sunrise scene at Yosemite. 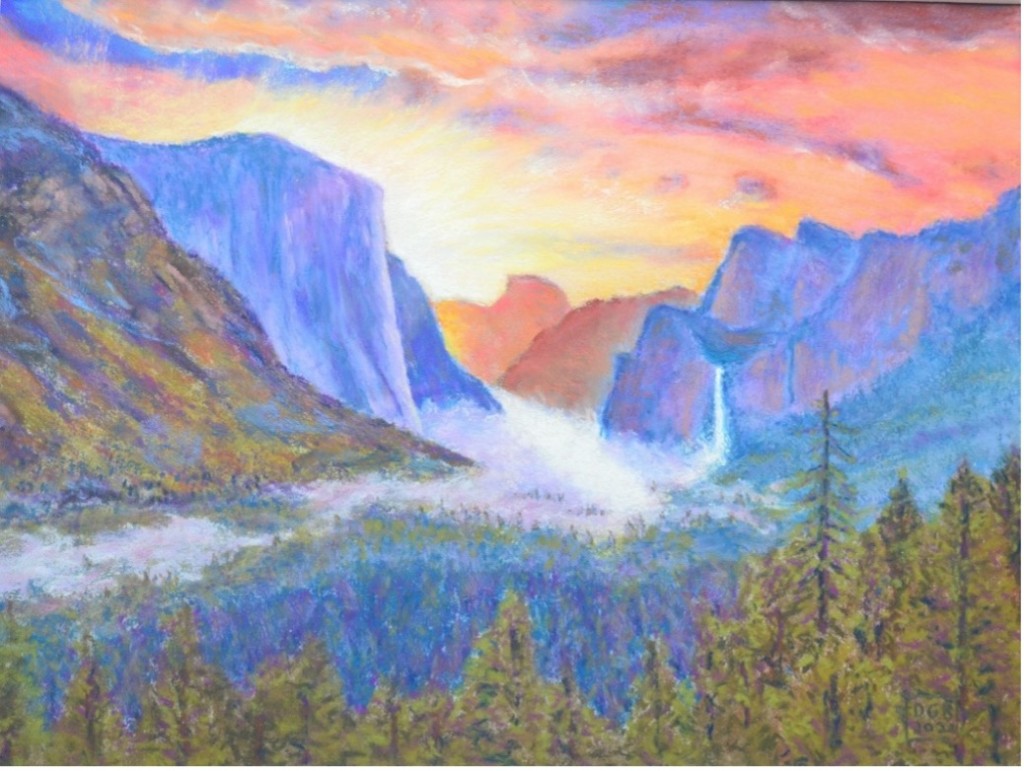 Fifty-five years after inheriting the art materials, Bolster finally learned how to use them. “It’s amazing what you can accomplish when you learn how to do it,” he says.

Bolster also signs his pastels just like his grandfather did. He draws a pencil square, signs his initials and marks the year in the box. Like grandfather, like grandson.

Cards, prints, some originals and commissions will be available for purchase on Etsy, @DavisonBolster_Art or davisonbolsterart.com.

New Exhibit at Brown University Features Art Made Behind Bars

34 Fun Things to Do in Rhode Island this November