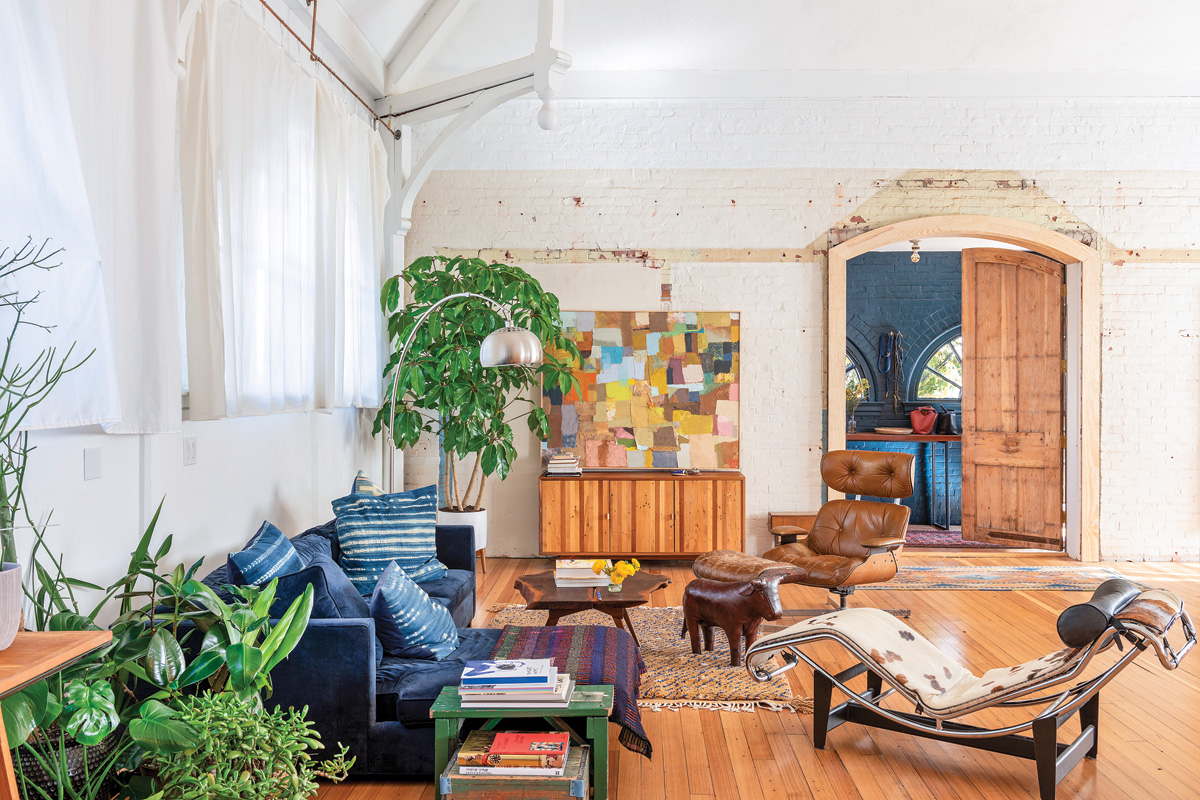 A painting by McDonough’s sister, Molly, conceals the TV when it’s not in use. Photography by Elaine Fredrick.

Opportunity Knocks
The idea of renovating a historic two-room, mixed-use building rather than purchasing a ready-to-roll house built in this (or even the last) century might not appeal to most people, but it appealed to Lindy McDonough and Conor MacKean. In 2016, the couple was living in an apartment on the South Side and poring through increasingly expensive West Side real estate listings, looking for their first home. Then up popped this place — in Pawtucket.

Known as the Fifth Ward Wardroom, the building was constructed in 1886 and was named to the National Register of Historic Places in 1983. It was designed by William R. Walker and Son — the same architects who designed the Westerly and Pawtucket armories and the Majestic Theater (now home to Trinity Rep), to name a few — and it was originally constructed as a polling place and meeting hall.

“We were going back and forth,” says McDonough. “Do we want to live north? We moved to Providence to buy a home, but this one, when we walked in, it felt like we could have a piece of architectural significance.”

The scale and price were right, and its uniqueness was something they likely couldn’t afford on the West Side. She, a designer, and he, an engineer and a product designer, saw this property as an opportunity. 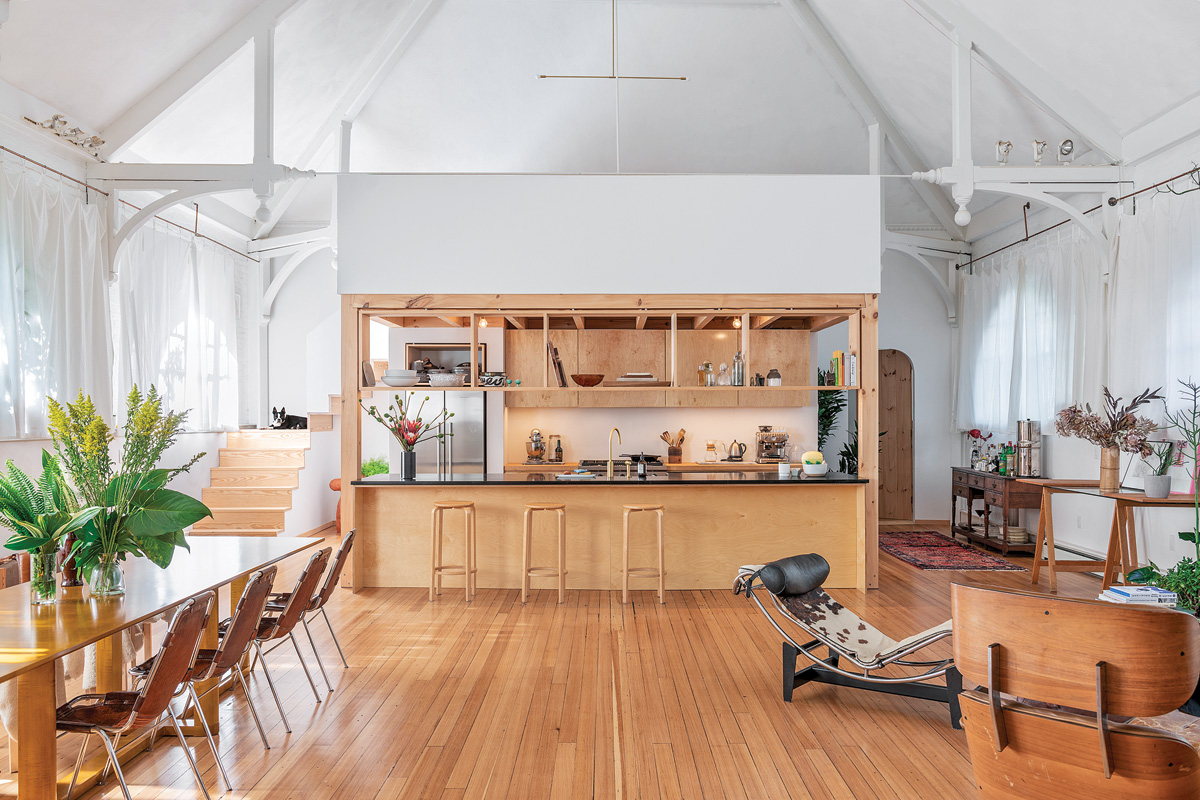 A thirteen-foot dining table by O and G Studio in Warren is ideal for large gatherings, which the couple regularly hosts. The previously enclosed kitchen was opened to the living space and reconfigured, creating an inviting, highly functional focal point perfectly suited to their lifestyle. Photography by Elaine Fredrick.

RISD Connections
The Fifth Ward Wardroom was first converted into a mixed-use residential/commercial building in the 1980s by RISD professor of architecture Jim Barnes. By 2016, it had undergone a few additional minor renovations under the supervision of two subsequent RISD-affiliated owners. The kitchen was located in the same place it is today, but it was a completely enclosed space that was only accessible by sliding glass doors on either side. The front room, now home to the living area and dining areas, was used as the last owner’s printmaking studio; the back of the house, where the master bedroom is now located, was used for storage and entry was through the kitchen.

“We thought about just moving in, but it’s more or less just a two-room house. So, it really didn’t allow us the opportunity to half-move in and renovate,” MacKean says. “You sort of have to be all in.”

And so they were. McDonough, herself a RISD grad, and MacKean connected with fellow-RISD grads Anastasia Laurenzi and Mike Larsen of Oblique Studio. With the exception of a single interior structural wall in the back of the building, the entire interior was completely demoed in preparation for its next incarnation.

Collaborative Process
The ensuing collaboration, which also included structural engineers from Structures Workshop, had several goals: to create an inviting, cohesive space conducive to entertaining, to create intimate spaces with the vast open volume of the room and to do it all frugally.

“We did this on a very tight budget,” MacKean says.

To save where they could, McDonough and MacKean contributed sweat and materials. They painted the ceilings themselves and refinished the original hardwood floors. MacKean spent a day at IKEA, sketching out what he wanted for kitchen cabinets. Once he had the layout set, he bought the frames sans the door, constructing them and as many side components as he could himself using plywood. Laurenzi’s redesign for the kitchen maintained the location of the sink and stove to prevent water and gas lines from having to be replumbed. Yet still, says McDonough, Laurenzi gave them the roomy kitchen they wanted.

“Anastasia is incredible at conceptualizing the amount of space you need to feel comfortable,” she says. “I can have eight people cooking and they’re not uncomfortable or on top of each other.”

Other materials were recovered from various places. The master bathroom tiles — vintage 1970s Mexican tile originally intended for an indoor pool — were salvaged from a relative’s barn. Twenty years ago MacKean and his brother had salvaged (and saved) several three-panel doors from a house that was being demolished; those doors were refinished and used in the main room. 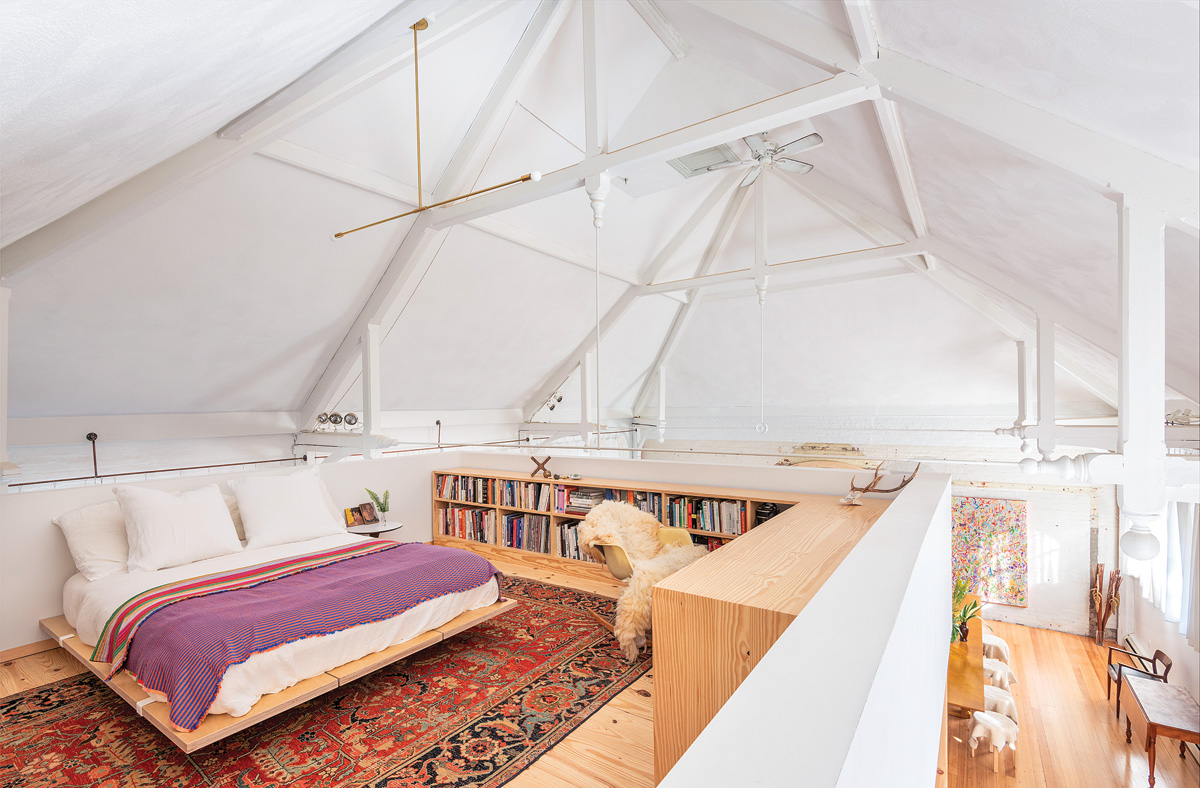 The loft offers overnight guests a surprisingly private retreat that still feels like part of the main space. Photography by Elaine Fredrick.

Permanence and Preciousness
McDonough and MacKean have focused most of their attention on the interior, although they have begun to dabble outside. Last summer they planted smoke bushes, some ornamental grasses and a few flowers. “We want it to feel haphazard but beautiful,” says McDonough.

The house itself is red brick with stately granite sills; it looks its age in a good way.

Everything McDonough and MacKean have done — and still may do — to the house considers its past and purpose. To them, permanence and preciousness matter.

McDonough, co-founder and creative director of Lotuff Leather in Providence, is sensitive to the property’s significance as a maker space. “It’s a work/live studio, so using materials like plywood, like soapstone — things that are robust in a way and not precious — was part of the design that we wanted. We wanted to use things that could function in a studio or in a house. We didn’t want to turn it into something that it’s not,” she says.

And, says MacKean, they were careful to honor its history.

“We were pretty careful not to destroy anything that had historic value,” he says. “To some extent, we built everything inside so that in twenty years if someone really wants to take it out, nothing structural is really affected. They could take out the loft and everything that we built and you’d still have the same original structure.” 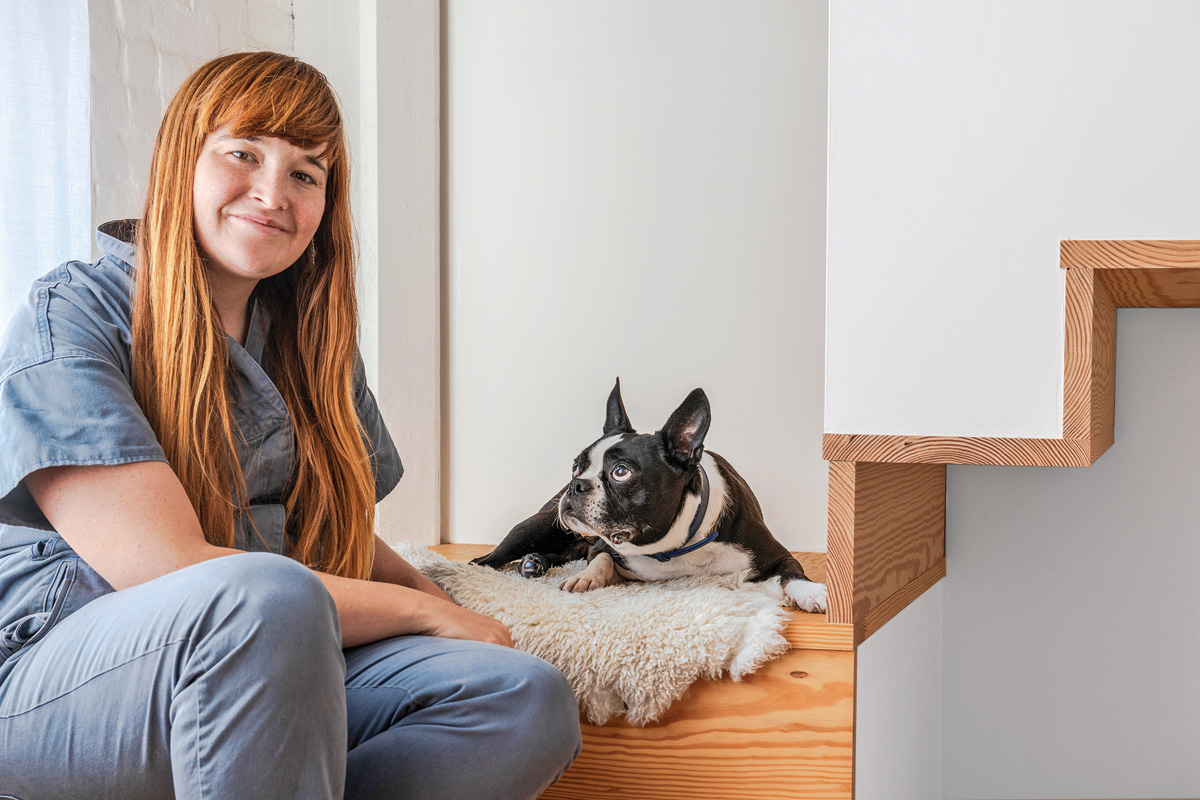 The newly configured stairs provide Tux, the couple’s Boston terrier, a view through the high arched windows to the street. Photography by Elaine Fredrick.