Behind the Scenes at Contemporary Theater Company

Actually, the real reason I’m here…is to kill you.” Music swells, someone in the audience gasps and the lights dim. Despite being ten minutes into an improv show, it’s clear we aren’t expecting such a twist in the seemingly lighthearted scenario involving two freshmen unpacking their dorm on move-in day.

Just thirty seconds prior, a moderator in the front row (think Drew Carey’s role in “Whose Line Is It Anyway?”) has suggested one of the improvisers “confess” something to the other. While I’ve been anticipating something more like a rom-com-inspired love declaration, I’m oddly delighted when the performer suddenly brandishes an imaginary knife in his co-lead’s face.

The intimate setup of the Contemporary Theater Company’s auditorium in Wakefield allows spectators to see the performers’ reactions up close, the wheels turning in their heads as they figure out their next move. The second improviser takes the sudden narrative change in stride, moving back and appearing resigned to the fact that his new roommate is actually his would-be assassin. 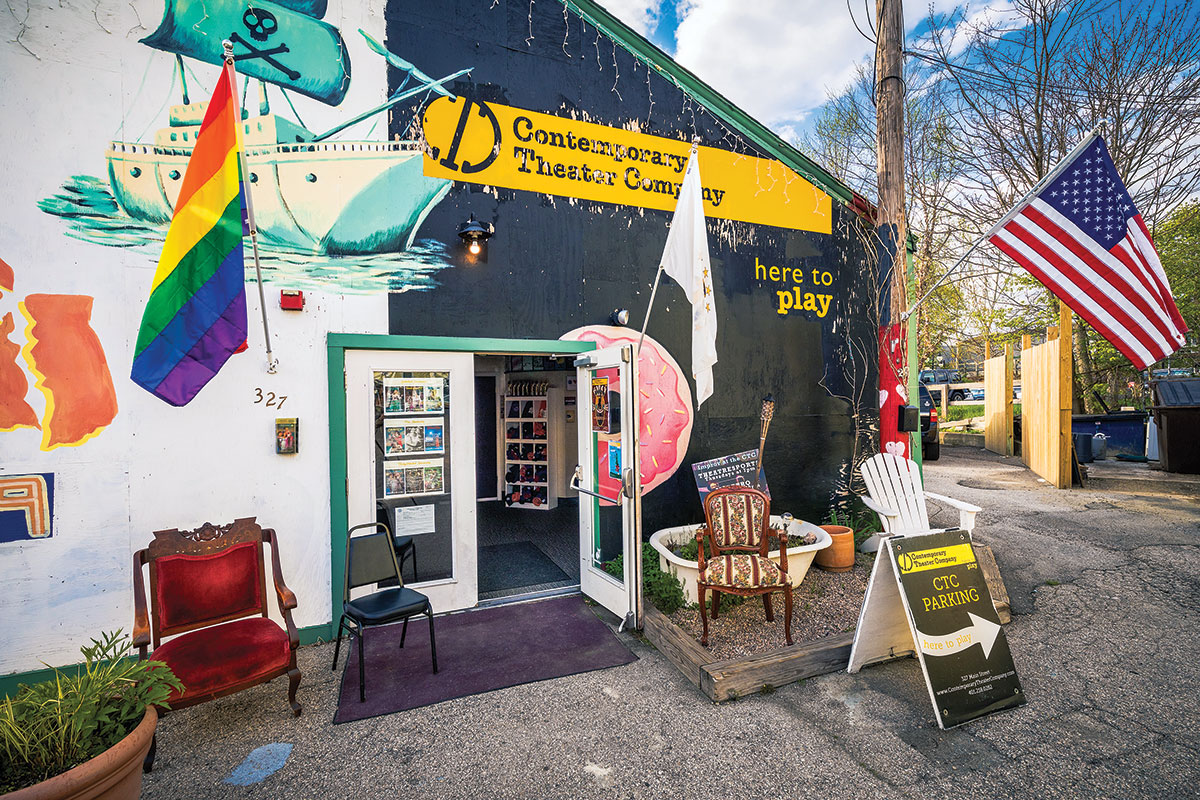 Located right off Main Street in Wakefield, the Contemporary Theater Company welcomes all who enjoy and appreciate the performing arts with its colorful, eclectic exterior. Photography by Wolf Matthewson.

The two parry verbal blows for another minute or so before the confrontation culminates in a comical, over-the-top death scene. As the overhead lights fade, signaling the end of the scene, the host replaces the improvisers on stage and asks the audience to rate the performance with our applause. We give it a three out of four, and the score gets recorded on a chalkboard by the edge of the stage. Each “player” in the show’s troupe (ten total) has the chance to win us over throughout three distinct rounds, and in addition to calling out instructions, the moderators are tasked with cutting the lower-scoring actors from the lineup as the rounds play out. Only one player can earn the coveted title of “Micetro” (and a $5 prize) by the night’s end.

Throughout the show, the various players are certainly put to task: One skit involves challenges invoked by the audience (“Get the other player to propose!”) while another requires three performers to act as one single character on a date. Even players not on stage are still on the ball, often jumping in to shake up a scene with a new character (like a menacing wolf) or to help with sound effects (like birds chirping).

It isn’t all smooth sailing, however: Sometimes the moderators have to tell a player to speak up or to make a different acting choice to help move a plotline forward. Sometimes a performer breaks character to laugh at another’s quip or to question, “Can I do that?” Surprisingly, the sporadic interruptions only add to the experience. Case in point: When one of the improvisers enters a scene as a deaf old man, ignoring his stage mate’s attempts to speak with him, a moderator interrupts and says “No, you can hear.” The player’s immediate response of slapping his hands to his ears and shouting, exuberantly, “By George, I can hear, it’s a miracle!” makes me cackle.

Everything about this little improv show in a tiny theater just off the beaten track is charming and fun. The players are in their element, clearly having a great time, and as a result, so am I. In this moment, I can’t help but think about how I’ve been to breakfast at Phil’s on Main Street many a morning and yet had never thought to explore the colorful building that lies just beyond it. That is, not until recently.

Exactly one week earlier, on a Friday afternoon, I’m in the same theater, meeting with the Contemporary Theater Company’s manager, Maggie Cady, who fills me in on its origins.

“In 2005, when our artistic director, Chris Simpson, was in high school, he and some friends put on a show at the Courthouse Center for the Arts in West Kingston,” Cady explains. “They had a lot of fun and so they decided to do it again the next summer.”

Despite parting ways for college, the friends made sure to reconvene each summer to continue the tradition. After Simpson graduated and returned to his home state of little Rhody, he received a year-long grant to do the theater full-time in 2009. Fortunately, the operation was a hit and the Contemporary Theater Company was born. “At that point, the theater was somewhat nomadic,” Cady recalls. “Moving around, doing different shows in lots of different spaces.”

It wasn’t until 2012 that the company moved into its current space right off Main Street (the former home of the Hera Gallery, which now resides on High Street). It has since been transformed into a fully functioning theater complete with a 100-seat auditorium, a multi-level stage and a music pit, as well as a cozy lobby equipped with a beer and wine bar. 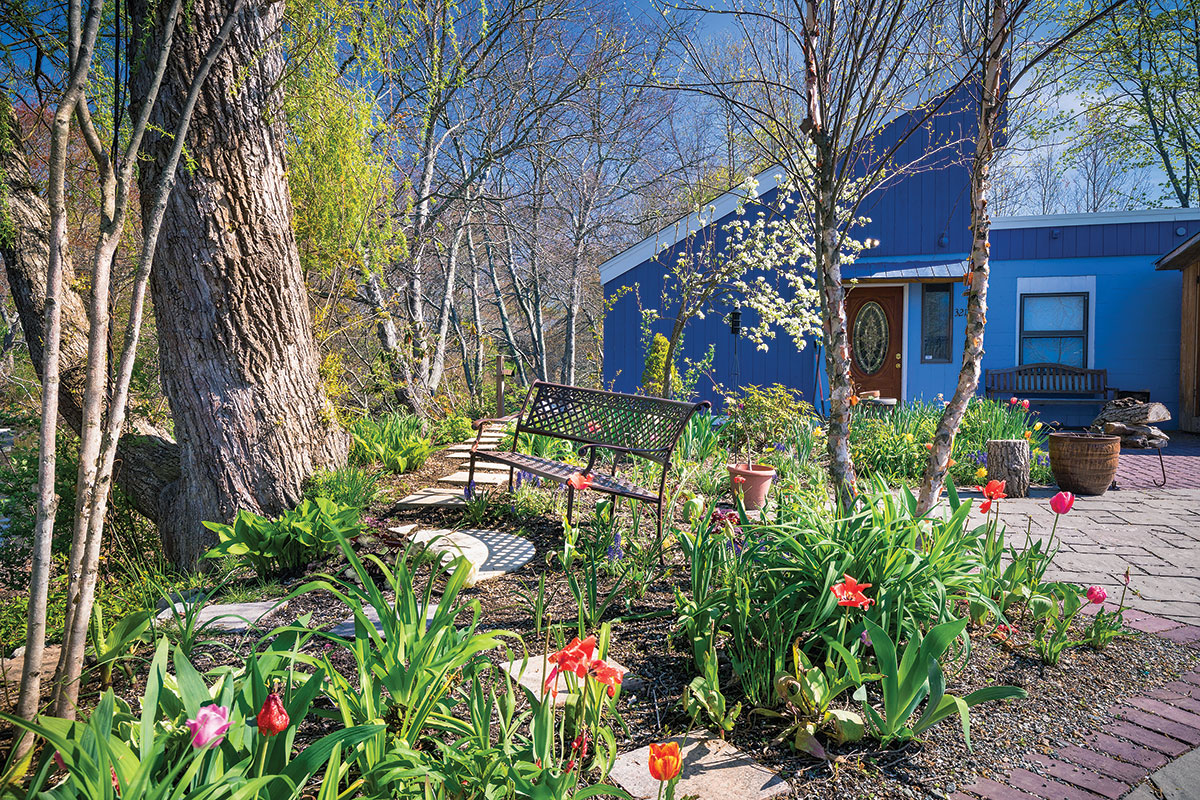 The theater’s gorgeous outdoor patio hosts to many performances throughout the summer. Photography by Wolf Matthewson.

“We bought the space in back, which has our rehearsal studio and patio, in 2015,” Cady says, “and then last June we officially bought the building we’re sitting in. So now we own the theater!”

The daughter of professional traveling jugglers (who have been known to grace the Contemporary Theater’s stage from time to time), Cady was no stranger to the performing arts growing up. In fact, she says she often helped her parents with their shows. Still, theater as a career path didn’t quite come to fruition until she met fellow Princeton matriculate, Chris Simpson.

“He told me about his theater company back home, and I was like, ‘Hmm….’ ” she recalls, tapping her finger to her chin. “I came up to visit a couple of times and I thought, ‘These are really good people doing really fun work — this would be a great thing to do.’ After we graduated, I moved to Rhode Island to work at the company and I’ve been loving it ever since.”

Nowadays, as the manager, Cady does a little bit of everything, from stage managing and light design to directing and participating in the shows.

“It’s the kind of theater where everybody pitches in and we all wear many hats,” she explains.

Which makes sense, because this little theater has a lot going on. Improv shows and festivals, indoor and outdoor plays, chorus concerts: You name it, they perform it. And as its website (rightfully) boasts, the company has produced more than seventy full-length productions and many smaller events since its inception and currently produces more performances each year than any other theater in the state.

“This summer we have two main-stage scripted shows: The Book Club Play and Wonder of the World. They’re both comedies and a lot of fun,’” Cady says. “Then outside we have Shakespeare on the Saugatucket: we’ll do the Two Gentlemen of Verona in July and Henry IV Part 1 in August. We’re especially excited for Henry because it’s our first time performing a history.”

How do they decide on the lineup? Cady, Simpson and two associate artistic directors, along with other interested ensemble members, are in charge. The early stages involve a lot of reading.

“The shows come to us in many different ways. Sometimes, we’ll get together and read a couple of plays out loud and be like, ‘I can imagine doing that.’ Sometimes somebody is really excited about a show and they’ll tell us about it, or sometimes we’ll just stumble upon one. Or we’ll fall back on the classics. We’re going to do Hamlet in the fall because that’s one of those ones where you’re like, ‘Of course we have to do Hamlet at some point.’ ”

Depending on the show, the company has a good sense of its schedule about eight months or so in advance. Cady says they already know what’s on deck for the rest of the year (like The Skriker, directed by Cady herself, this fall) and they’re starting to plan for their spring 2020 lineup.

And then, on the opposite end of the spectrum, there are the improvised plays.

“We just finished our first one, an improvised murder mystery, about a month ago,” Cady says. “At the beginning of each show we knew our characters — our names and our professions — and that there is a murder, but that’s it. Our relationships, our backstories, who died and who did the killing changes every night.”

The off-the-cuff spectacle was such a hit with audiences that they’ve decided to do it again, only this time in soap opera form rather than a whodunnit. The ad-libbed show will weave together plots of love, deception, unexpected reunions and life and death situations.

“It will also be a continuous storyline from week to week,” Cady adds.

As of publication, To Be Continued… An Improvised Soap Opera will be a few weeks into the story, but as with any good melodrama, newcomers should be able to jump right in and enjoy. You can check it out on Thursday nights at 7 p.m. from now until August 29.

Plus, prior to the shows, the Contemporary Theater Company will also regularly host performances by local singing duo, AnamCara, and serve food from Phil’s Restaurant on its outdoor patio during RiverFire (Wakefield’s take on WaterFire). Add in a waffle cone from Brickley’s up the road and it sounds like a perfect summer night. But if Thursdays are a no go, don’t fret. There are plenty of other upcoming Main Street happenings involving the theater, like the Endless Summer Event in August and Oktoberfest this fall.

“It’s a great community and it’s just been wonderful getting so many people down here and sharing it all with them,” Cady says. “I know that Rhode Islanders are reluctant to drive all the way down from Providence to Wakefield — in the theater community we call it crossing the Cranston-Dixon line — but it’s worth it. There’s always something new happening and we have something for everybody.”

This includes opportunities for those who hope to get in on some of the creative action. Although the company has a regular rotation of local actors that they hire, Cady says they hold open auditions for every show.

“We see who shows up and it’s always fun to meet new people and make new friends,” she adds. 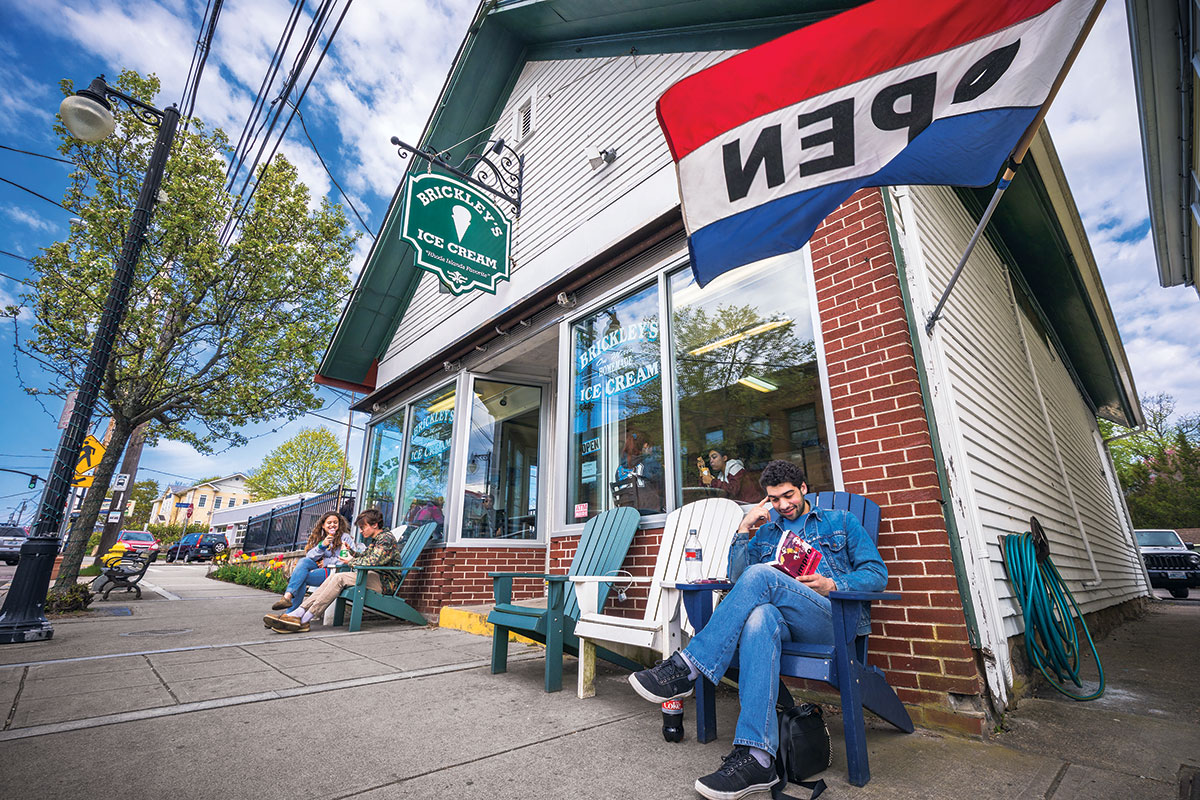 A Contemporary Theater performance, followed by a waffle cone from Brickley’s, sounds like a perfect summer night. Photography by Wolf Matthewson.

The Contemporary Theater Company also hosts a number of week-long camps (improv, Shakespeare, playwriting and music) throughout the summer, and they teach classes throughout the year, both in conjunction with local schools and on their own.

“We have classes for adults, too; our improv classes get students of all ages,” Cady says. “I feel like there aren’t a lot of opportunities out there for people with that much of an age difference to interact as peers. It’s a really fun way to put everyone in one space and mix the generations.”

The Micetro Improv show is a perfect example. The troupe that’s present during my visit is made up of high schoolers, twenty- and thirty-somethings, middle-aged parents and retirees, and they play off each other with familiarity and ease. By the end of the show, the different players have managed to reduce me to tears three separate times through comedy, sentimentality and tragedy.

It’s not my usual Friday night activity of curling up on the couch with Netflix and popcorn, but it’s a lot more exhilarating. After we’ve cheered on the new Micetro and walked back to the car, my friend, who had been skeptical about improv in the first place, turns and says, “We should come here next Friday night, too.”