We need the magic more than ever. 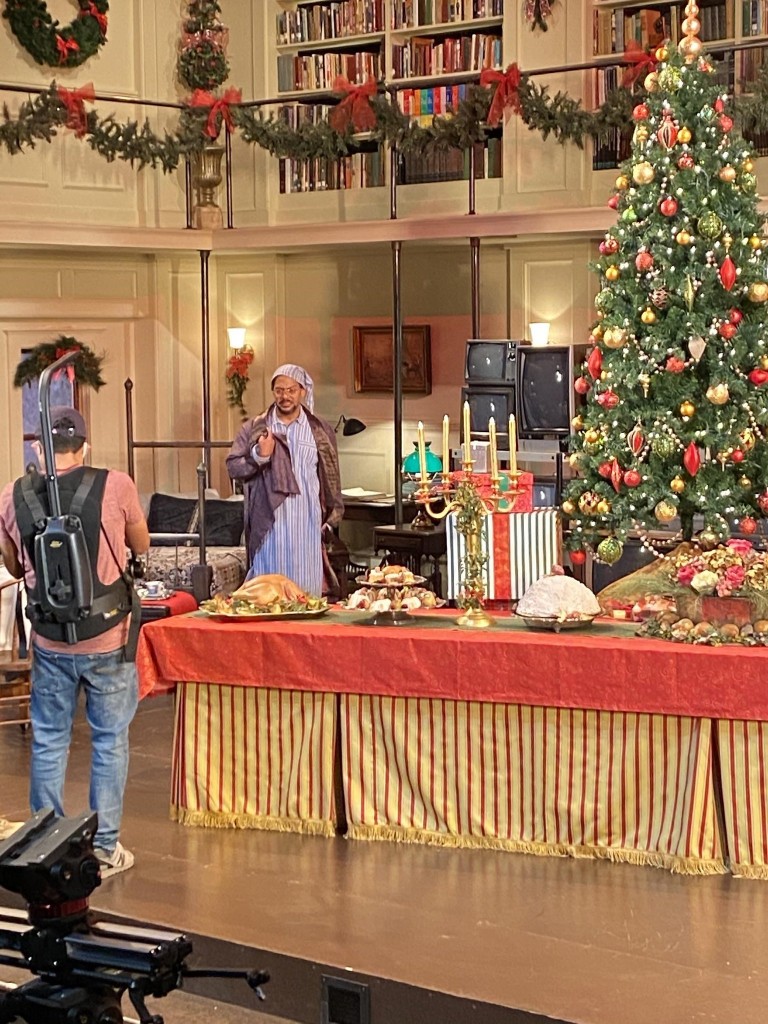 Amid uncertainty, tradition anchors us.

For so many Rhode Islanders — through personal difficulties, big and small — Trinity Repertory Company’s annual staging of A Christmas Carol has bestowed gifts of anticipation, surprise, magic, comfort. A reminder of our humanity. A reminder of our potential. A reminder, most importantly, of our goodness.

None of those gifts will be lost in 2020. If anything, they’ll reach more people than ever. This year’s production streams online free of charge from December 17 to January 10 with viewers registered in all fifty states and sixteen countries.

Back in September, Trinity Rep’s artistic director, Curt Columbus, and a team of six actors and six creatives worked for a week to figure out “what in the heck you can do in the time of COVID,” says Columbus in a phone interview last week. Their approach reflects the year we’ve lived with the happy ending we so crave. It communicates: “Here’s where we are and here are the things that limit us, and you’re getting to watch that as well as the joys of all of it,” he says.

One such limitation was in-person collaboration. To keep everyone safe, the team devised a story structure where actors could work separately but still maintain a semblance of connectivity (the theme of the year, it seems).

“There are elements of this that look like a film and there are elements that have the homemade feel to them,” says Columbus. “There are very few in-person scenes. The only people who could be in in-person scenes are people who could be in pods,” such as the Cratchits played by Trinity Rep regular Taavon Gamble, his actor husband, Adam, and their niece, Evelyn, as Tiny Tim.

Most of the film work is executed by the actors themselves — “Who doesn’t love being responsible for their own cameras and lighting? And the answer is no one,” says Columbus wryly — with a couple of socially distanced, face-shielded days of shooting with this year’s Scrooge, company member Joe Wilson Jr. The production also leans into the ways in which we’ve connected in 2020, think: a technologically inept Scrooge who struggles to answer his Zoom calls. Significant elements of Dickens’s masterwork don’t get lost in social distance, either; the ghosts of Christmas Past, Present and Future, for example, visit Scrooge on stacks of old televisions.

“The thing about Trinity Rep’s Christmas Carol is that it’s always broken expectations, so we had to make something that did that,” says Columbus, adding that the production’s director of photography, Alberto Genao, “is just a gift. It’s been really easy to collaborate with him. He’s making all this wacky stuff happen that I have going on…. he and I have been having so much fun doing the special effects.”

The production is also “a little bit of a love poem to Providence and Rhode Island. This is our story, collectively,” Columbus says, with actors in Dickensian attire strolling through the city. “We have shots of Scrooge on his walk from work to home, taking his dinner at the tavern he always goes to.”

Trinity Rep is a character in the production, too, Columbus says. Viewers, who have been unable to sweep through the lobby doors since March, can glimpse the sacred spaces of Rhode Island’s state theater.

“And when Scrooge comes home,” Columbus adds, “he goes to Trinity Rep. Because that’s where he lives, you know?”

Click here to register for free access to Trinity Repertory Company’s A Christmas Carol, which streams on-demand from December 17 to January 10. If you have the means, don’t be a Scrooge and donate to the Rhode Island Community Food Bank, for which Trinity Rep has fundraised for the last fifteen years. The Rhode Island Foundation will match the first $60,000 in viewer giving, and Ocean State Job Lot will match the next $60,000 in viewer giving with food donations. While you’re at it, thank Trinity Rep for keeping spirits bright with a donation, too.