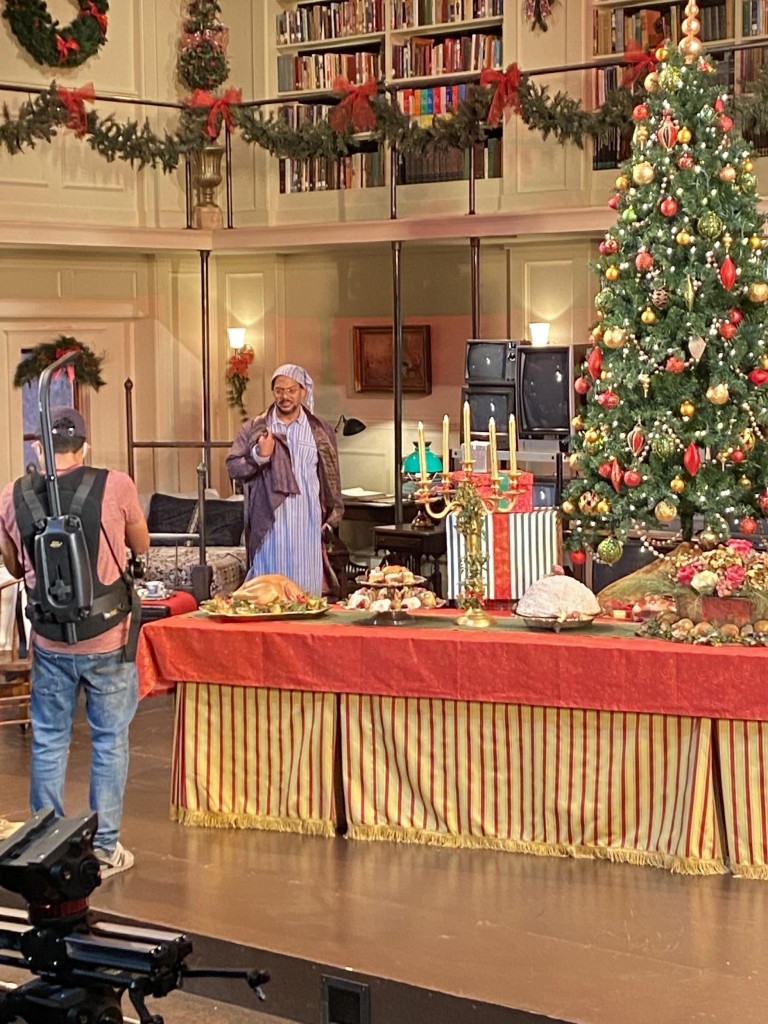 Joe Wilson Jr. as Scrooge during the filming of Trinity Rep’s A Christmas Carol online, which will stream Dec. 17-Jan. 10. Photo by Amanda Downing Carney.

From Thanksgiving through New Year’s Eve, donations made to Trinity Repertory Company by the public will be matched by the Rhode Island Foundation with an equal grant made to the Rhode Island Community Food Bank, up to a total of $60,000. After the first $60,000 is met, Ocean State Job Lot will match the second $60,000 in gifts made to Trinity Rep with an equivalent donation of food.

The community can both support the local theater and its A Christmas Carol production while helping neighbors who need assistance during this traumatic time. A new report issued by the Food Bank revealed that one in four households report being food insecure this year.

The Rhode Island Foundation and Ocean State Job Lot’s decisions to match grants will greatly benefit both the Food Bank and Trinity Rep.

“The state’s food pantries and meal sites are faced with an immense increase in need from hungry Rhode Islanders,” says President and CEO of the Rhode Island Foundation, Neil D. Steinberg. “Arts organizations that depend on ticket sales are struggling to cope with the loss of live performances. Our matching grants will enable people to double the impact of their donations to Trinity Rep.”

Job Lot is also more than ready to pitch in to help. “Job Lot loves Trinity Rep. We have been a supporter for over two decades. Addressing food insecurity is a core initiative for the Ocean State Job Lot Charitable Foundation. The opportunity to support both missions at the same time gives us great pleasure,” says Ocean State Job Lot CEO Marc Perlman.

Register to watch the annual holiday production here, which will stream on December 17. Donations can be made during the registration process or video streaming, and those made between Thanksgiving and New Year’s will be counted toward the Rhode Island Foundation and Ocean State Job Lot’s matching grant campaigns.

Trinity Rep’s A Christmas Carol, By the Numbers