Warwick native Jariah Gray has been amassing “hungry” fans on TikTok and Instagram alike since starting the good eats guide in 2020. 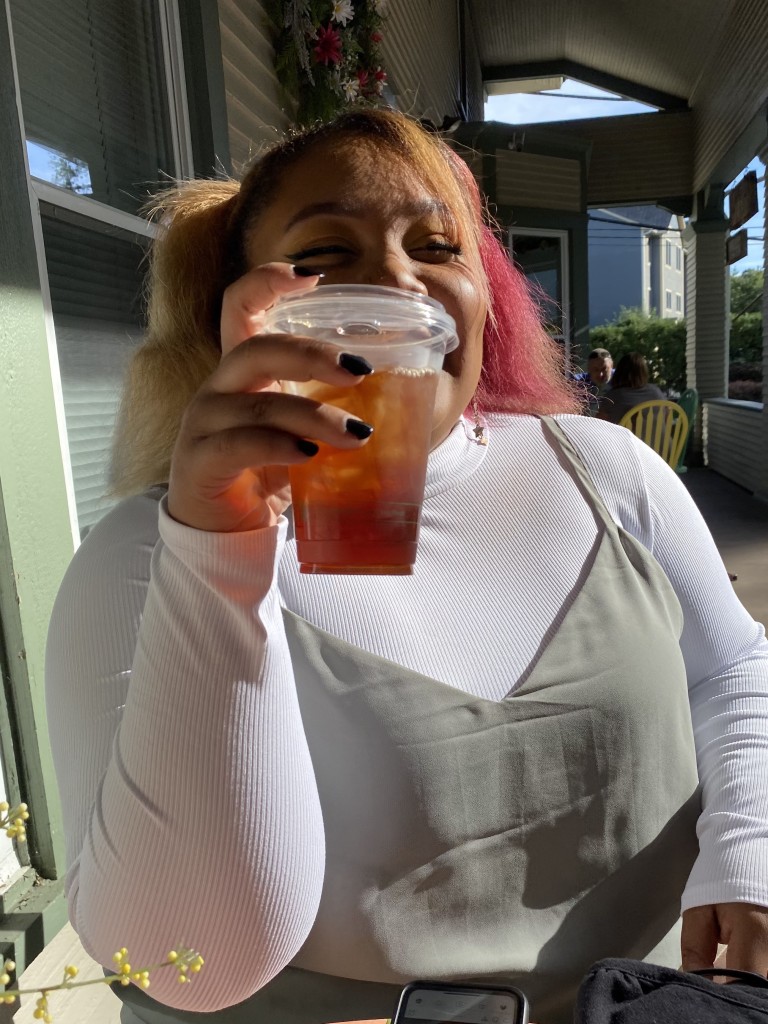 Many local TikTok users will recognize the soothing, welcoming tone of Two Hungry Bitches’ Jariah Gray  from the first syllable alone. But other than the fact that she’s managed to amass more than 35,000 followers on social media’s (arguably) most popular platform — plus another 4,000 over on Instagram —  and that she’s known for providing “a bad bitch’s guide to good eats in the northeast,” just how much do her “hungries” know about the Rhode Island-based foodie?

“I’m really not that interesting,” she says with a laugh before taking a sip from her Seven Stars iced coffee (her first, and it’s Two Hungry Bitches-approved). Just one look at the teal tips of her hair and it’s immediately clear that this statement is false.

“Oh, my hair has been every color of the rainbow,” she says. “I don’t know what to do next; I’m waiting for this to fade out first.”

Between this flashy fun fact and the successful socials, one might gather that Gray is the extroverted, life-of-the-party type.

A Warwick native, Gray’s love and appreciation for good eats came at an early age. Not only does her whole family enjoy cooking (she’s the only baker, though), her parents often took her and her two sisters out to eat in equal measure. Frequent haunts included hidden gems Cosmic Pizza and New Canton in Warwick, as well as the summertime staples Champlin’s Seafood Deck and Jimmy’s Port Side in Narragansett.

But when it came to ordering for herself, Gray says she was always terrified.

Instead, she found her confidence through different means. Like many young Generation Zers, Gray turned to the internet and created a YouTube channel in the late aughts.

“The videos were very embarrassing and they’re all private now, but for the time and for just a twelve year old girl in her room, I had a decent handful of followers,” she explains.

Though she no longer posts to that account, she did take those skills and run with them.

“I freelance and do social media for work now,” Gray says. “It’s been part of my life forever and, at this point, I can’t get rid of it.”

But Two Hungry Bitches [THB], which she still considers a side gig, didn’t come until September of 2020. 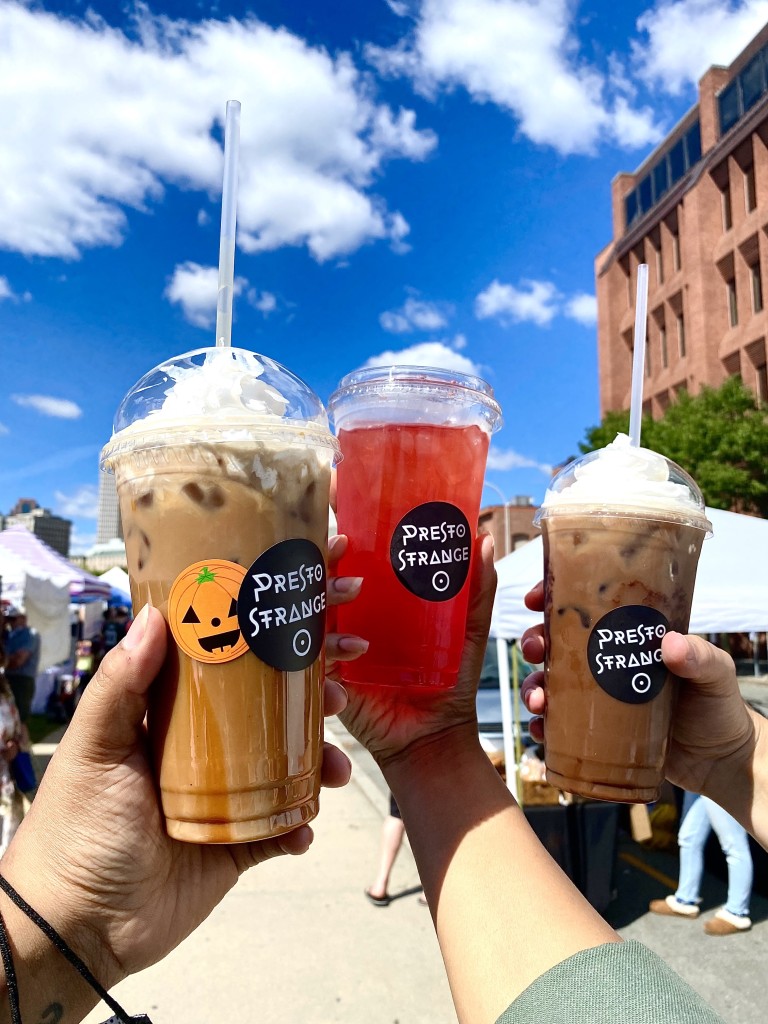 “During the pandemic, I had seen a couple of places that I love close. Some temporarily, some long-term and, unfortunately, some permanently. I hated it. Of course for them, but also because I’m a creature of habit and, selfishly, I wanted them there,” she says. “But I realized that there’s no way to support these businesses without people knowing about them. I can keep going to my favorite restaurant all I want, but if it’s only me and five other people, it’s not going to survive.”

Thus, the Instagram and TikTok accounts were born. Gray can’t recall exactly how she came up with the attention-grabbing handle, but she does know that she spent hours down the Google rabbit hole making sure it didn’t have any negative connotations and wasn’t already taken by another business.

“I did have someone else with me in the beginning, but it was always me producing content,” Gray says, acknowledging the “two” in the name. “Now, it’s kind of become just me and whoever the second person tagging along is: friends, family, coworkers. My sisters are heavily involved. It’s always been a party of two with me as a core.”

Originally, she started making videos to share with friends and coworkers, but it wasn’t long before they started taking off. A video featuring Munchies and Milkshakes in Massachusetts along with one showcasing Feed the Cheeks’ opening in Providence went the most viral — today, they each have nearly 300,000 views and more than 147,000 views, respectively.

“Those two were the first that really did numbers and I was like, ‘Wow, people are actually seeing these, not just my family,” she explains “It was a shock because I feel like, even though you know people have access, you kind of always just send stuff out into the void. You never expect a hundred thousand people to collectively watch one video that you made and that you’re in. It’s a crazy feeling. And not even looking at the videos that have gone insanely viral, just a thousand views…. I don’t think I’ve been in a room with 1,000 people who know who I am, so that’s crazy. Having that viewership never feels normal.”

She says she will also never get used to being recognized in public. Followers have come up to her in the grocery store, at the Providence Flea Market and even at the Big E.

“Even though 35,000 people follow the account, I still am like, ‘It’s not possible for you to know who I am.’ It’s such a surreal feeling. I’m not the most social person, I can be pretty awkward, but everyone’s so nice and the recognition warms my little cold heart.”

Helping local restaurants retain and gain new business isn’t Gray’s only motivation. She also sees them as a way to help customers, too.

“I’ve always had that anxiety when going to new restaurants of, ‘Oh, if I’m picking up my food, where do I go when I get there? I don’t want to just stand in the doorway, and I don’t want to ask anybody.’ If other people feel this way, I can show them which counter to go to, where to sit down, and so on. Or, I also have dress code anxiety. Like, ‘should I dress up or is it more casual?’ That’s also what I want to use the videos for: here’s an overview of the restaurant on a busy night and this is what I wore. If I can help even one person ease that anxiety that I know the feeling of, I love that.” 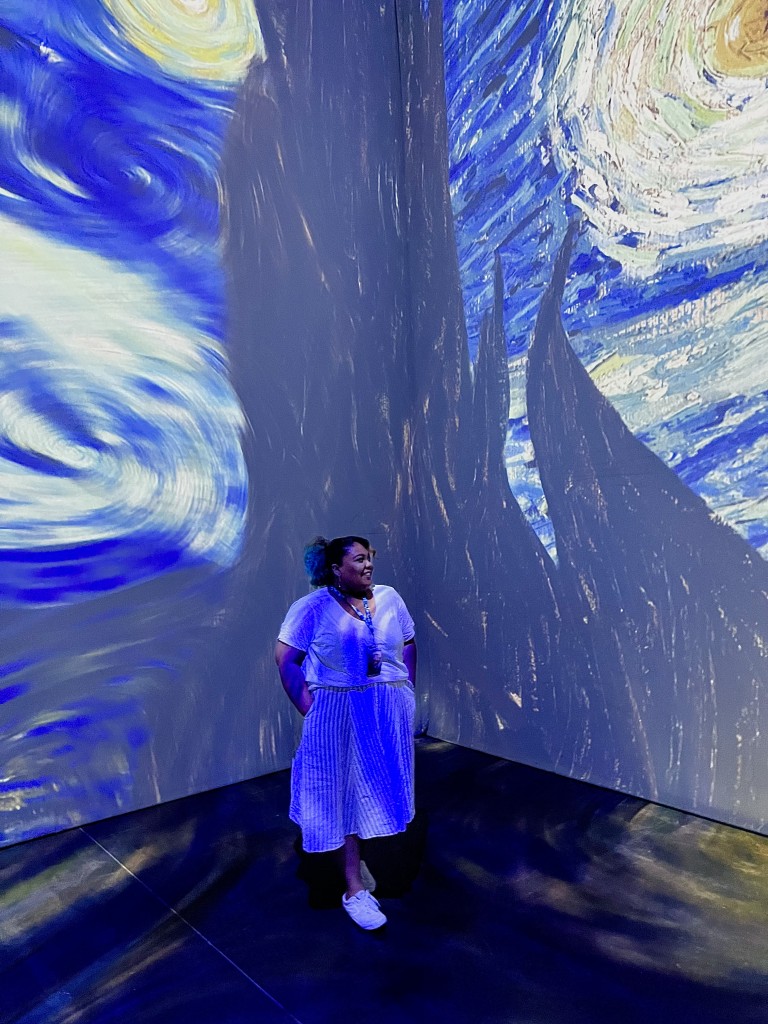 As for how Gray picks the places to feature, she says it depends on a variety of factors. While she did originally keep a list of restaurants that she either came across herself and wanted to try or that were recommended to her, she says it quickly went by the wayside once THB started picking up steam.

“Now I have a lot of restaurants that reach out specifically, and they get priority,” she explains. “From there it’s usually just really sporadic. I’ll drive by a cafe and if it looks cool, I’ll look at the menu and if there’s something I want, I just pop in and I record. Which I feel like keeps it fun. I am the type of person that when I am under too many restrictions, it starts feeling like work and I shut down. So I like the spontaneity.”

Depending on the video, the filming and editing process typically takes about an hour and a half from start to finish. She usually films clips in the sequence she wants them to appear for easy editing, and she doesn’t follow a script for the voiceover – she talks freely to make the videos feel more conversational and approachable.

“Videos that are formally worked out with restaurants often take a little bit longer because they have specific points they want me to touch on and I like to try and find ways to make things feel natural. I never want it to feel robotic,” she says. “But there are days, no matter what I’m working on, when one video takes me six hours because I hate the way my voice sounds or I get to the end and I realize I haven’t said half the things I wanted to, so I start over.”

Fortunately, Gray has never had to scrap a video altogether due to poor service or food.

“It’s a common question that I feel like everyone who runs a food account gets: ‘What happens if you review something and you don’t like it, would you do a negative review?’ I don’t think I would and luckily I don’t think I’ll have to. I haven’t had any experiences at a restaurant where I was uncomfortable and thought, ‘Maybe I’m not going to post that.’ Pretty much everything I’ve filmed, I’ve released or plan to release at some point.”

For now, THB is mainly a weekend endeavor, though Gray says it often has a tendency to take over.

“As things picked up, it kind of took over my life for a while – I took a little break over the summer just because I was doing so much, but now I’m back at it,” she says. “I wish I could do [THB] full time, that’s the goal.”

If you’d like to keep up with Gray and her adventures across New England (which aren’t all food-related — some of the most recent videos feature haunted houses across Rhode Island and a Rhode Island Comic Con giveaway), follow her at @twohungrybitchesri on TikTok and Instagram. 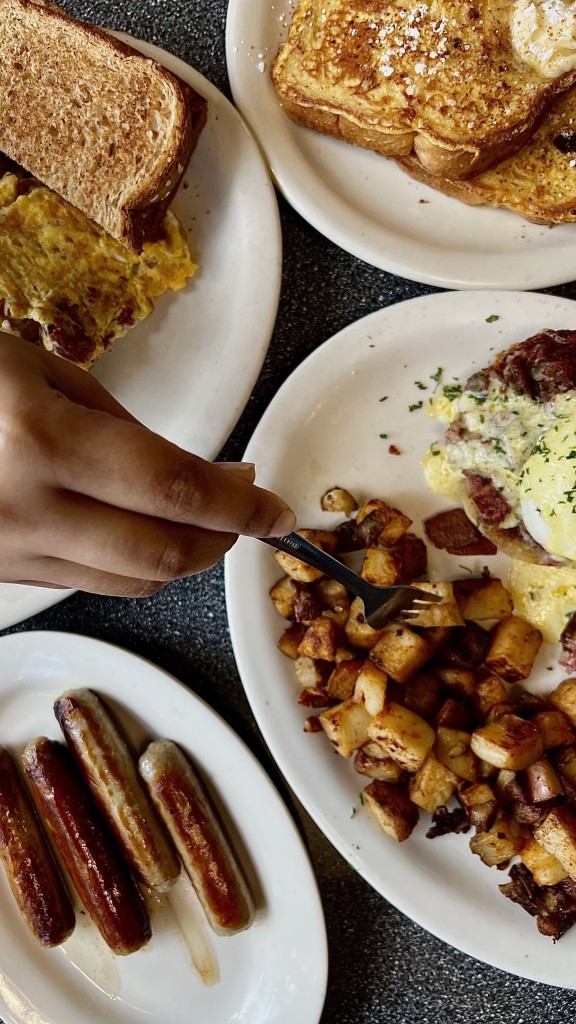 “Just by the amount of times I’ve gone, I’ll say Westshore Coffee Bar in Warwick. I always get a s’mores latte. I’m obsessed with s’mores and they load theirs with fluff and chocolate. It’s so good.”

“See, with these, I can’t necessarily pick a favorite — it’s like picking a child. But, again, based on the amount of times I’ve gone: Palo Tapas Bar. I love it so much.”

“I have a soft spot for Feed the Cheeks. They’re kind of the reason THB is what it is. Also the owner is the sweetest person and cookies are just so good and filling. That just reminded me though that I have to go get their monthly flavor!”

“There’s too many! I could give you a whole list. Ogie’s Trailer Park is always at the top; anytime anyone asks for a bar recommendation, it’s Ogie’s. Then there’s the Red Door, the Eddy, and the Royal Bobcat — they have Hanju Kitchen inside and their mac n’ cheese is so good.”

“The only thing coming to mind is Cosmic Pizza, but their pizza is amazing and I swear their Italian grinders are the best in the state. But I also might be biased because I literally grew up on them.”

“Aguardente, hands down. I love them, they’re fantastic. I haven’t been in a while and I’m so overdue because when they post on social media I’m just consistently drooling.”