Bugged Out: Just How Much Should We Worry About Ticks in Rhode Island?

As local researchers and clinicians continue the fight against Lyme Disease, a new tick threat is brewing across Long Island Sound. 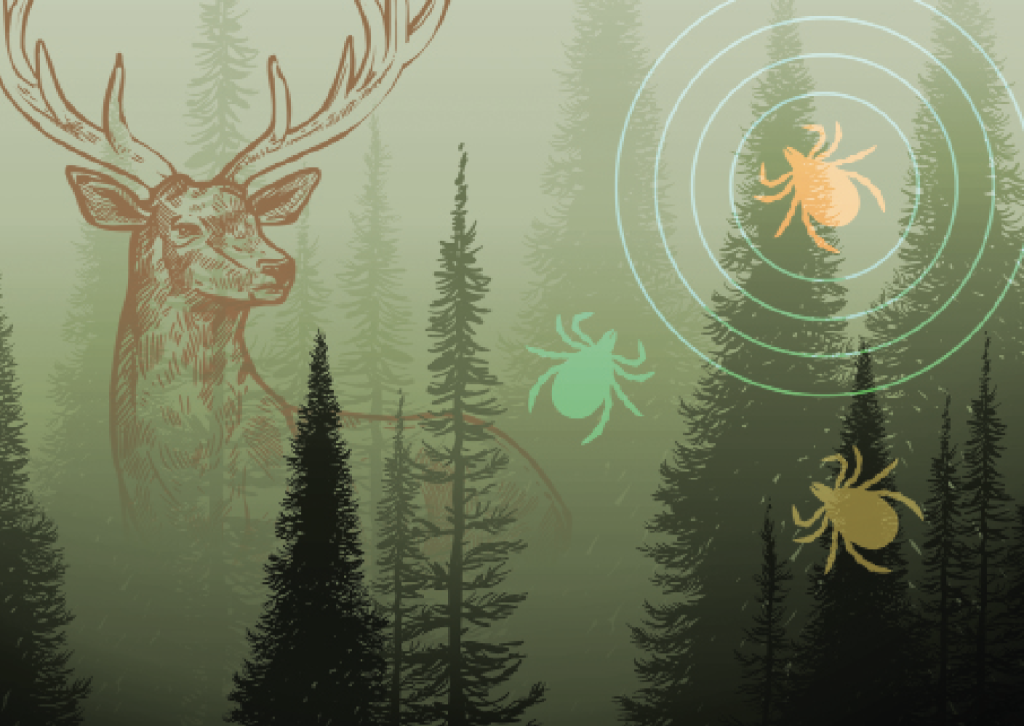 Cliff Vanover is a veritable tick magnet. Between his love of hiking and tending a Charlestown property that grazes the borders of the Great Swamp, Vanover has provided the local Ixodidae with countless opportunities for a blood meal. And they have taken them.

By his estimate, “I used to get fifty, sixty bites a year,” he says. “But usually the minute they bite me, they’re gone, because I can feel it.”

Skin hypersensitivity notwithstanding, Vanover has contracted Lyme disease five times from encounters with blacklegged — or deer — ticks, and, back in 1995, a red meat allergy from the bite of a Lone Star tick.

“One night, after eating a hamburger, I broke out in hives on my hand and soon my body was one solid hive. My throat was tightening up. It was a classic anaphylactic response,” he says. “My wife had some heavy-duty antihistamines, so I took one and a hot shower and it went away. I really should have gone to the hospital, but I didn’t — tough guy.”

Later, a series of scratch tests at the allergist’s office confirmed a reaction to mammalian flesh.

“I had it before they even knew it had anything to do with ticks,” Vanover says.

Today, scientists know that ticks — the number one carriers of vector-borne illness — are responsible for more than a dozen diseases. In New England, babesiosis, Lyme, ehrlichiosis and anaplasmosis, all carried by the blacklegged tick, are most common. Jannelle Couret, a University of Rhode Island biologist who studies the ecology and biology of tick vectors, says Centers for Disease Control and Prevention data shows that the blacklegged tick is increasing its geographical range as its population grows.

“This tick can transmit seven known human pathogens,” she says. “Now it’s expanding within two regions: the Northeast and the north central Midwest. Both areas are expanding toward each other.”

URI entomologist Thomas Mather, who conducted a statewide tick survey for twenty-one years until 2014, sees another growing regional threat: the rise of the Lone Star tick, so named for the white blotch on the back of the female. Lone Star ticks have long been established in Rhode Island — especially on Prudence
Island, where the tick population correlates strongly to that of the deer. But they had never shown up in his samples in any appreciable numbers until recently. From 2015 to 2019, Mather’s anecdotal sampling in North Kingstown and Jamestown has seen their numbers slowly increase.

“On Jamestown they are pretty thoroughly abundant. This year, we’ve been getting citizen reports from all over the state — Lincoln, Warwick, West Greenwich, Charlestown, Westerly. This is a real change over the last eight years. Submissions to TickSpotters, URI’s crowd-sourced tick survey, increased by 300 percent.”

And he fears that an experience already playing out on Long Island is a harbinger. Scott Campbell, a medical entomologist and laboratory chief of the Arthropod-Borne Disease Laboratory at the Suffolk County Department of Health Services, says “we still see plenty of blacklegged ticks; it just seems that the Lone Star tick has moved to the front of the class. We attribute it to the expanding deer population — they are very deer-dependent for feeding and reproduction. They are less susceptible to desiccation, unlike blacklegged ticks, which are found in more moist, shaded environments.”

Lone Star ticks lay masses of up to 5,000 eggs, and the larvae only move about three feet from where they hatch. They are not microscopic, but small enough to be unnoticed by a human walking through. When that happens, the unfortunate can suffer hundreds of bites, Campbell says.

Blacklegged ticks, meanwhile, pick up bacterium such as the spirochaete Borrelia burgdorferi — which causes about 300,000 reported cases of Lyme disease annually in the United States —during the larval stage, when they typically feed on rodents and birds, their first hosts. The nymphs seek medium-sized mammals for their next meal, when they have a second opportunity to acquire the spirochaetes. The ticks’ quest is hanging out on a grass blade or a leaf waiting for a host, such as a white-tailed deer or a human, to pass by. The Lone Star tick is more aggressive and less specific when seeking hosts.

Brian Kelly, owner of East End Tick and Mosquito Control in Southampton, New York, says that controlling for blacklegged ticks has been a key part of his Long Island business for twenty-five years.

“Over the years, though, things have really changed. Ten to one, it’s Lone Star ticks. You find them walking across a hot driveway or a parking lot. People find them in the middle of a gravel driveway. In the past, we’d concentrate on the perimeter. Now, to get any type of control, we have to spray the whole property. And they like humans. If you are sitting on a lawn chair by the pool, Lone Star ticks will come looking for you. They’re little hunters.”

While Lone Star ticks don’t transmit Borrelia burgdorferi, they can pass on the bacteria that cause ehrlichiosis and tularemia, along with other diseases. The Lone Star tick bite is also associated with alpha-gal syndrome — an immunological response to the tick’s saliva that results in an allergy to red meat. The saliva causes the human to produce the antibody immunoglobulin E that is specific to alpha-gal, a carbohydrate found in non-primate mammals. The symptoms, which occur three to eight hours after meat is ingested, vary widely and can include skin, cardiovascular, gastrointestinal and respiratory responses, says Dr. Erin
McGintee, a Long Island-based allergist.

Alpha-gal’s association with the Lone Star tick was confirmed in 2011, several years after hospital patients in the Southeast suffered high numbers of allergic
reactions to the antibody drug cetuximab, which contains alpha-gal. This led to the discovery that those patients already had antibodies that recognized the drug. Eventually, investigators isolated the external source — a Lone Star tick bite. Today, McGintee has about 755 patients under her care who have acquired alpha-gal syndrome.

Allergist Dr. Russell Settipane, who recently spotted a Lone Star tick climbing his screen door in East Greenwich, says nothing like that is happening in Rhode Island.

“This is a very rare phenomenon,” he says, because a Lone Star tick bite does not necessarily result in the development of the alpha-gal syndrome. “I see maybe two or three patients a year [for alpha-gal], but the more educated the patient, the more they have read about alpha-gal, drives the requests for tests. I saw one person, who interpreted a test as possibly positive, and came to me for further evaluation. Looking at this test, I told her, ‘This is not positive. Did you have a reaction to eating meat?’ These are the pitfalls of misinformation and misdiagnosis.”

Lyme remains the dominant threat to human health in Rhode Island from ticks. Statewide, Rhode Island had 839 cases of Lyme disease in 2020, with an incidence rate of seventy-seven cases per 100,000, according to Rhode Island Department of Health data. Five years ago, at the request of patients and medical providers, Lifespan established the Lyme Disease Center, the state’s only such dedicated clinic, which sees an average of 400 patients annually.

Most infections clear after a short course of antibiotics, says Dr. Timothy Flanigan, co-director of the clinic. The Lyme Disease Center also treats a much smaller segment of the patient population who suffer from prolonged effects, called post-treatment Lyme or chronic Lyme. Currently, the clinic is following patients in a phase two trial for a new Lyme vaccine — the first since LYMErix was discontinued in 2002 — produced by Valneva and Pfizer, to study dosing and immunological response.

“[LYMErix] did prevent Lyme disease, but it was controversial. There was concern it might cause increased joint inflammation, so it was pulled from the market,” Flanigan says. “That there’s a new vaccine candidate for Lyme is very exciting.”

Each spring, the Department of Health and Department of Environmental Management make their public awareness push, urging Rhode Islanders to repel (stay away from tick habitats and wear long sleeves and pants, tucked into your socks); remove (use tweezers as close to the skin as possible, pull straight up); and check for ticks (shower after and do a full-body scan). This May, officials expressed concern that the very mild winter plus the warm spring put more people on a collision course with more ticks, resulting in a bad year for tick bites and Lyme disease.

What is not being discussed is controlling the deer population. White-tailed deer, once nearly extinct in Rhode Island, numbered an estimated 19,000 in 2019. Professional herd culling has been controversial. In 2014, Block Island ditched plans to hire sharpshooters to thin the deer there, after baiting problems and a state law banning silencers threatened the operation’s success. No other municipality has seriously considered it. URI, a participant in a new $10 million CDC regional grant to fund a New England Center of Excellence in Vector-Borne Diseases, is exploring the development of a deer-ingestible tick repellent and killer, similar to those for dogs and cats.

In the meantime, Couret, at URI, is wrapping up the first statewide tick survey in eight years, looking for population trends and pathogens, and expects to publish her findings this fall.

And Cliff Vanover in Charlestown has made a few lifestyle changes, to middling effect.

“I am fine eating turkey and chicken,” he says. “I stay out of the woods in the summertime. I take beach hikes instead. This year, I’ve had about thirty bites, and I had Lyme disease this spring.”