This Therapeutic Garden is Just What the Doctor Ordered

The East Greenwich plot features all sorts of medicinal plantings.

Feast for the Eyes
Six-year-old Forest strides confidently toward his mother, Rebecca Macri, and me where we stand talking at the edge of her main garden, and he triumphantly hands me a small green leaf. The little leaf is narrow and its tip resembles an arched garden spade. “Try this,” he says confidently. 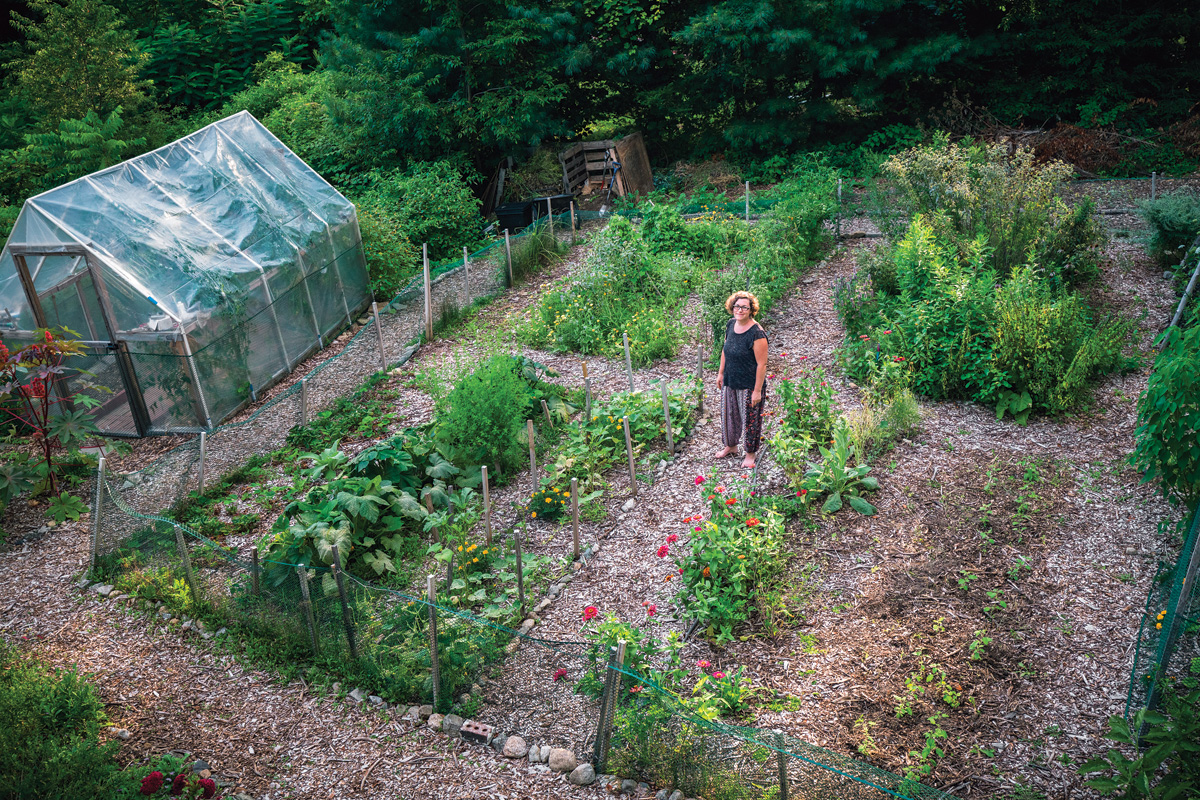 Rebecca Macri’s property was one of twenty-six featured in the University of Rhode Island’s Gardening with the Masters 2019 summer tour. She clocked in more than 100 hours preparing for the biennial tour, which brought more than 400 visitors to her garden. The greenhouse — which housed tomatoes, moonflower and kale this season — extends Macri’s planting season, which begins with seeds in February. Photography by Wolf Matthewson.

The bite is a firework; my palate tingles with a pungent yet pleasant citrusy tang. There is a saying about things small but mighty, and this leaf of sheep sorrel (like Forest himself) is no exception.

“It’s good in salads, right?” Macri confirms with Forest, who nods in agreement and scampers off to find another edible, and there are plenty. 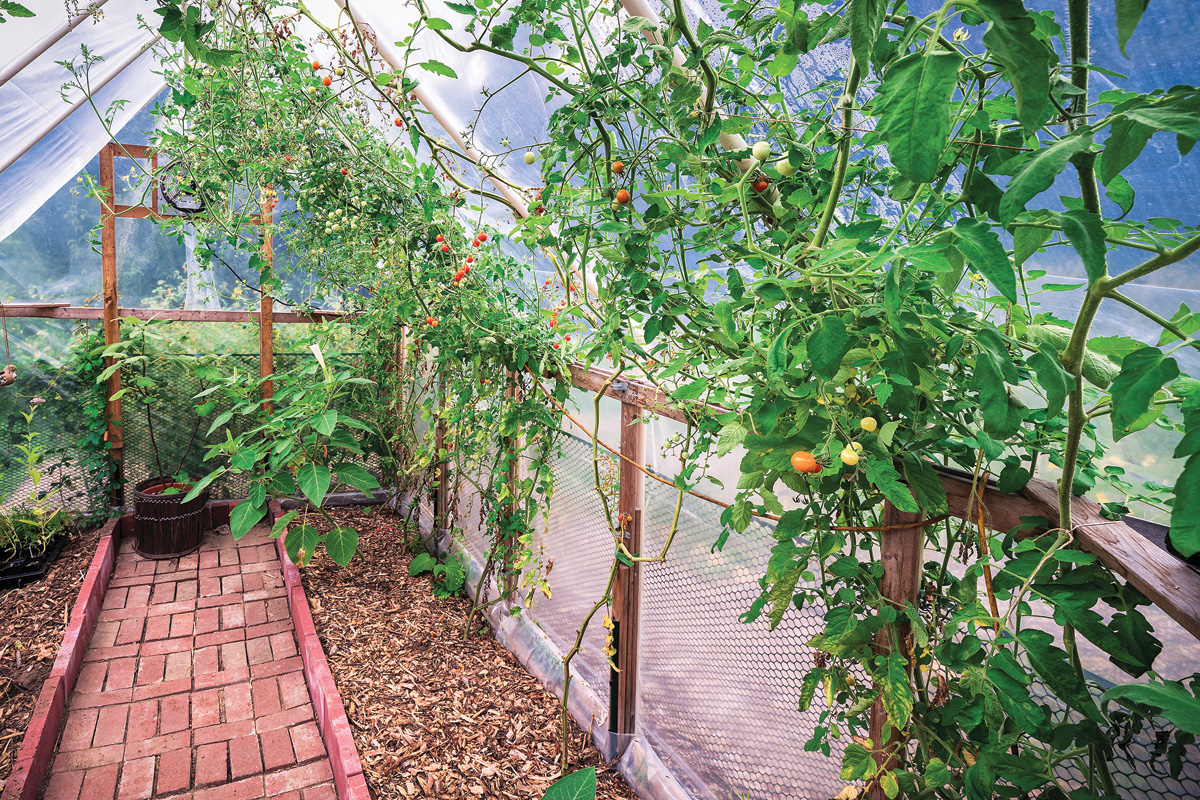 This particular garden is punctuated by flowers — marigolds and zinnias show their colors on this early fall day — but the herbs and edibles are the heart and soul of this space. A University of Rhode Island master gardener by calling and an artist and designer by trade, Macri’s garden is abundant with vegetables and culinary and medicinal herbs. An inventory reveals an assortment of familiars — strawberries, okra, squash, eggplant, onions, chamomile and chia, to name a few — and a plethora of less common selections. There are Mexican sour gherkins, which look like mini watermelons, dream root, mugwort, valerian and noodle beans. (“They were an experiment this year,” says Macri of the unusually large legumes. “None of us liked the taste, but they look pretty cool.”)

Heirlooms and Family
Gardening has always been something of a family affair for Macri. “When I was growing up, my mom always had a garden, and my grandmother had a vegetable garden and a perennial garden. I didn’t help a ton, but it was enough that it was in me when I got my own place.”

When Macri and her husband bought their first house in Providence in 2004, she started with a small garden and potted tomatoes in their front yard, the only space she had to plant. Ten years ago when they moved here to East Greenwich, she expanded her horizons.
“I had the space and it was a blank slate, so I really went to town,” she says.

There was a small garden around the pool and a few plantings in the back and by the driveway, but Macri has genuinely transformed the entire yard. The greenhouse, which she built with help from her father-in-law, is one of her favorite additions. “It makes me happy,” she says. “I go out there in the winter and eat lunch all the time to get extra sun.”

A mulch path across from the front door leads to a secluded rock where Macri meditates. The tiny flowers of the anise hyssop plant, which tastes and smells like black licorice, attract pollinators; the plant is a culinary herb used to support the respiratory system. Purple hibiscus blossom mid-summer in the pool garden. Photography by Wolf Matthewson.

Green Practices
The master gardener program prioritizes environmentally sound, sustainable practices. “Being a steward of the land that you have is really important,” she says. “If everybody just took care of their own little piece, it would make such a big difference.”

Macri practices integrated pest management and opts for naturally derived treatments rather than chemical ones: Caterpillars are hand-picked, nets deter birds and wire fencing keeps away “voracious” groundhogs. Plants that are particularly tempting to insects are protected in the greenhouse.

Even her lawn is an opportunity to support pollinators. “It has lots of clover, which is good for pollinators, and it’s healthier for the soil because clover stays green without pesticides.”

To further support pollinators, Macri plants a bee feed mix that features a variety of native plants including aster, bee balm, coreopsis, forget-me-not and vetch. “It’s timed so that starting at the beginning all the way to the end of the season there’s always something blooming.”

Macri also makes her own compost, which cuts down on garbage, and she has begun lasagna gardening, a technique that entails layering mulch on top of compost on top of cardboard to clear new spaces for planting. 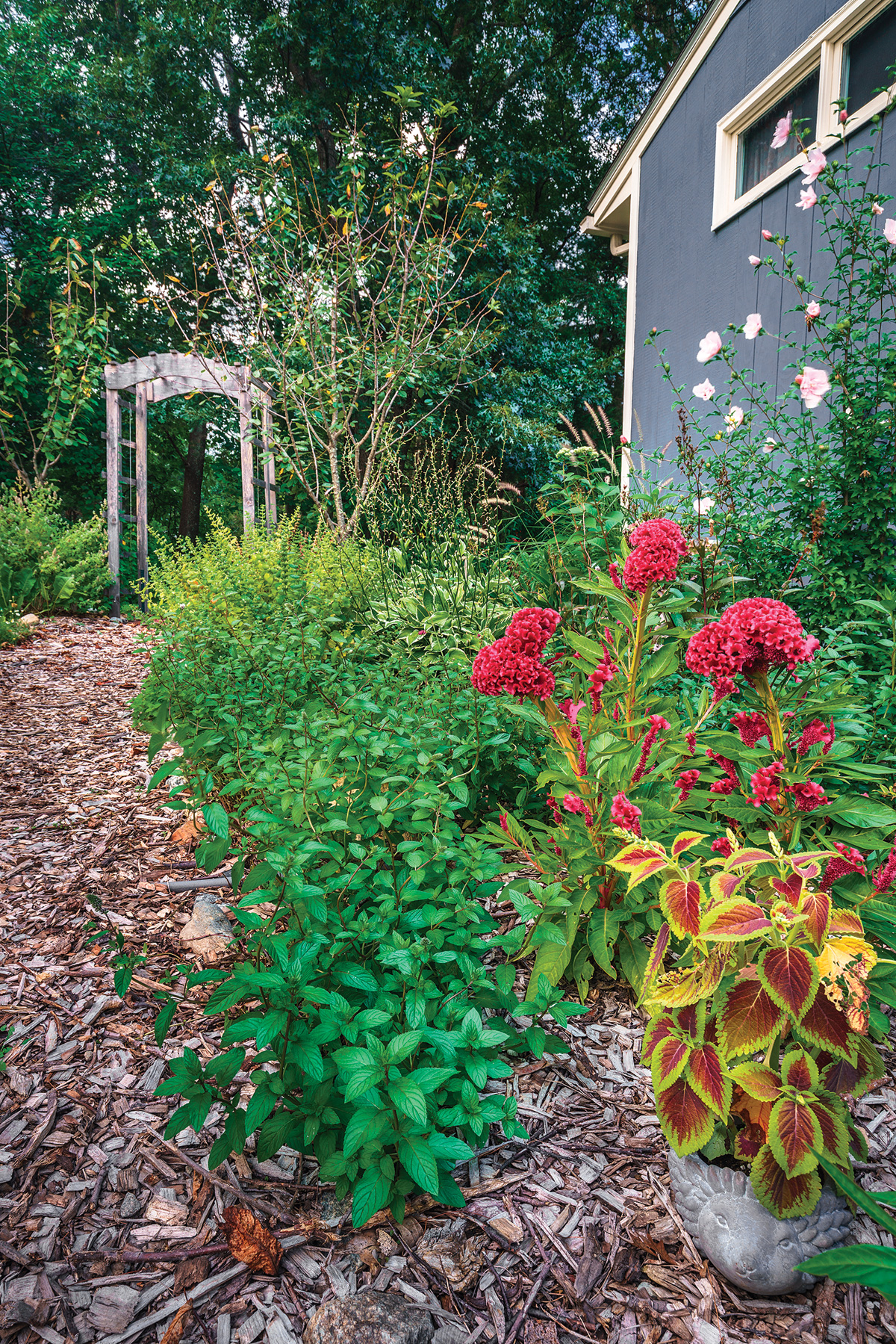 In the sideyard, where the main garden is, Macri dots the landscape with pots of mixed blooms and colorful foliage, such as coleus. Photography by Wolf Matthewson.

Natural Remedies
“I studied herbal medicine for a couple of years and I got into wild edibles and native edibles,” Macri says. Today she makes teas, tinctures and infusions — essentially strong teas — to support her family’s health with various herbs and plants from her garden.

For infusions, Macri says she regularly cycles through nettle, which is high in minerals and supports adrenal function; oatstraw to support the nervous system; comfrey for bone and muscle strength; linden, which supports the immune system and has anti-inflammatory properties; and red clover for reproductive system support. She takes infusions daily and administers them to Forest and his nine-year-old brother Enzo in smoothies. 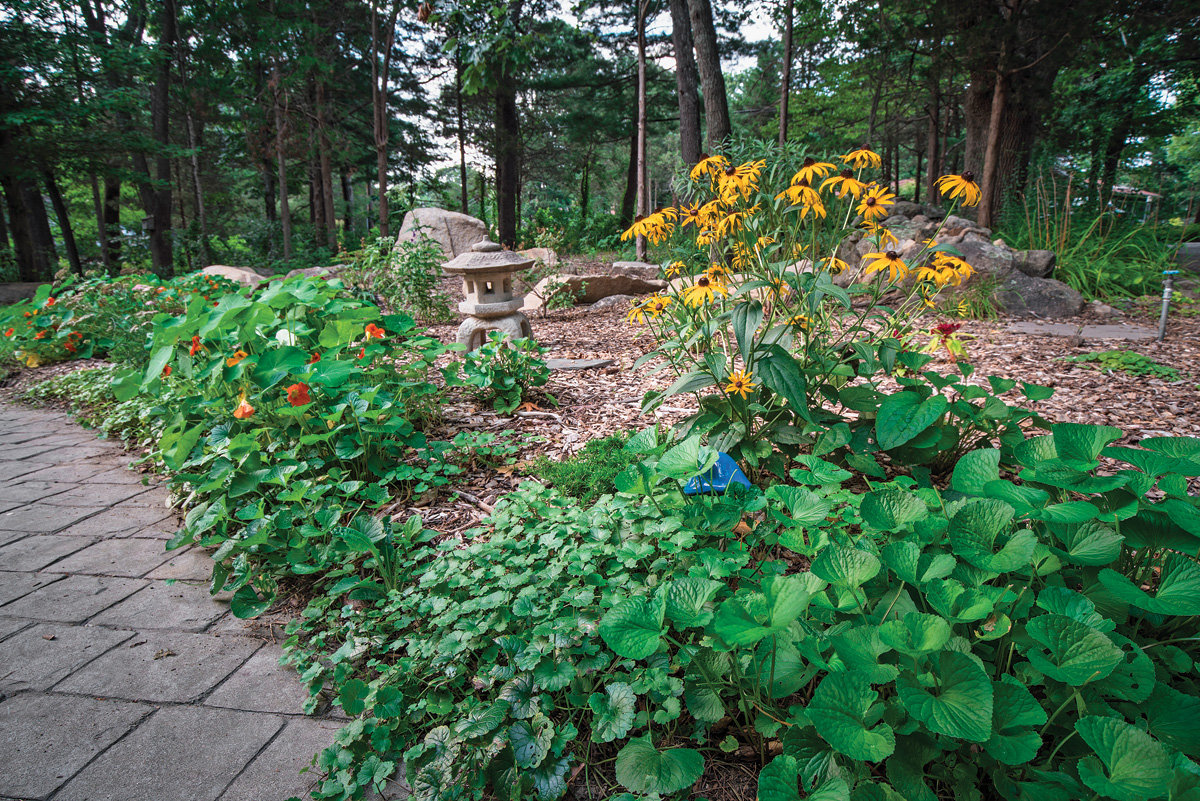 Black-eyed Susans and nasturtiums bloom in the rock garden that runs along the front walkway. Photography by Wolf Matthewson.

“Almost anything that comes up with the kids, I take care of on my own. If there’s anything I don’t know what I’m dealing with and I need a diagnosis, I take them to the doctor, and he’s comfortable with herbal medicines. It feels good to have that medical backup, but then I feel very independent and empowered to be able to do this for all of us,” she says.

Overall, Macri believes herbal remedies are gaining mainstream acceptance. Drinking tea or putting something in your food feels natural and manageable, she says. “They’re familiar and they’ve been used for such a long period of time.”

While she understands that some people question the safety or effectiveness of medicinal herbs, she’s comforted by their origins and history. “I feel they’re so much more natural than pharmaceuticals, but there’s a place for both.”