This Bold Artists’ Abode was Once a Frumpy Masonic Lodge

A once-dysfunctional living space gets a budget-friendly re-do.

The kitchen; looking down to the kitchen from the recording studio doorway, with the bathroom on the right; the stairs at the back, left, lead to the main level living area.The bathroom table was built by the wife from wood that came from one of the walls; the vintage wooden beads can be found at places like Rhode Island Antiques Mall, Pawtucket.  Photography by Andrea Pietrangeli.

Star Turn
In the scene-stealing world of color and design, black is the new white. “Black isn’t going anywhere. It looks fantastic, especially in a small space,” says designer Janelle Blakely, founder of Blakely Interior Design. “It creates contrast, your eye is drawn to it.” Case in point: its use in the renovated kitchen and bath of this Wakefield project, where it kicks up the look several notches, enhancing the home’s cool, retro vibe. “Black creates a wow factor,” she says.
As a former Masonic lodge, the unassuming building, dating to 1890, was never intended as a residence. The kitchen, stuck in the back on a lower level, had been used as a mess hall in its early life. The goal for the new homeowners, a punk rock star and his artist wife, was a better organized, functioning space for their getaway home, but created on a decidedly non-rock star budget. “We wanted to make the house work better,” Blakely says of her clients. The couple, who love vintage, also wanted to move the kitchen, redo the bathroom, and add a recording studio and art studio on the same floor, all while minimizing wasted space. 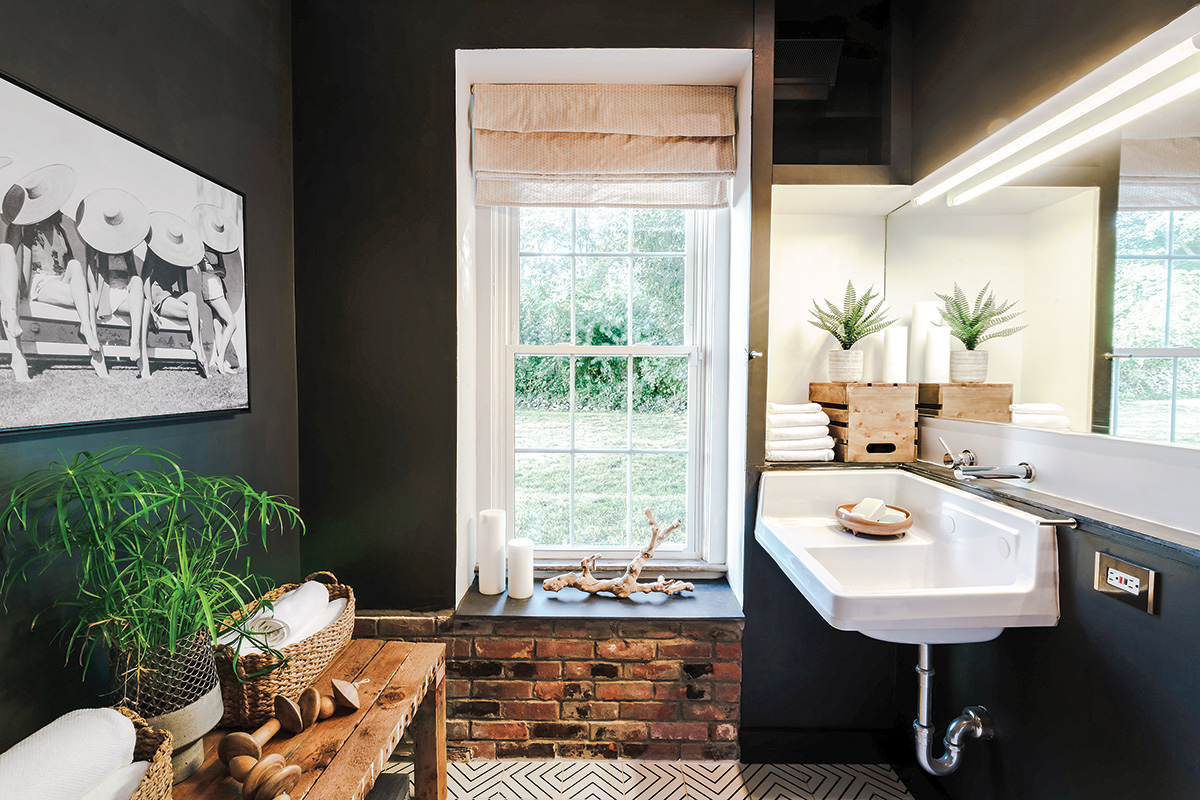 The window covering is custom made in Blakely’s workroom, blakelyinteriordesign.com; the faucet is Grohe; the walls are Sherwin Williams’ “Iron Ore.” Photography by Andrea Pietrangeli.

Full Exposure
First order of business was the demo, which the homeowners tackled themselves, gutting the whole bottom floor to save money, as well as managing the construction. “They took on a lot,” Blakely says. The bathroom got a facelift; the shower was retiled and the open brick was preserved. The sink, a perfect size for the small space, is original to the house.

What’s gone, however, are the small boxy rooms that were once the kitchen. Gone, too, is its ceiling; the couple liked the look of the exposed beams, part of the original structure. With that approach, there’s always the possibility of uncovering unpleasant surprises. “We were fortunate. There was just some piping,” Blakely says of what became a design feature.

What had been the kitchen space is now a sweet breakfast nook with a view of the back patio, and it also faces the new kitchen. Vintage black pane factory windows that the wife found separate the two spaces, preserving an open look and creating a focal point. 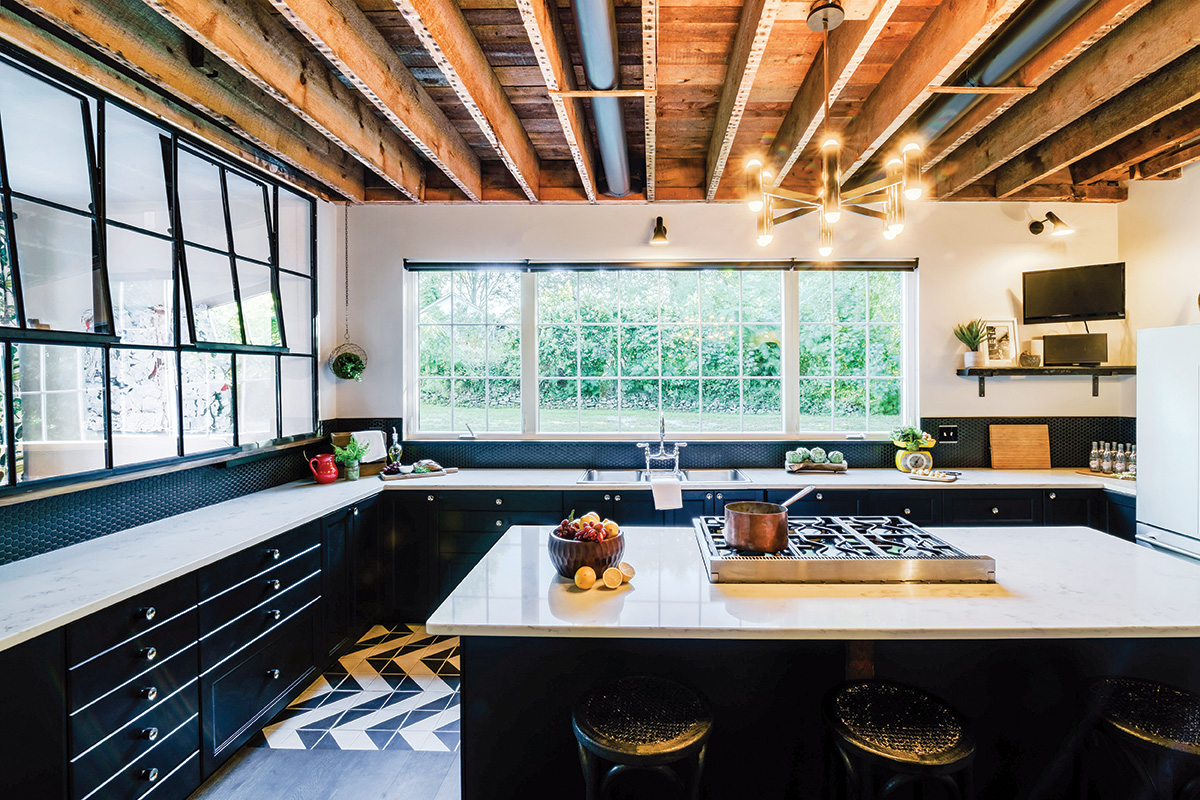 The kitchen and bathroom floor tiles and black penny round back splash are from Best Tile, Warwick. The kitchen cabinets are Ikea; the gas range is Miele; the chandelier is from Pop Emporium. Photography by Andrea Pietrangeli

History Lesson
The kitchen is well thought out, again with a nod to the couple’s respect for the past. The undercounter stools are an antique find and the sinks and faucet were in the house when the clients bought it. The owner’s multi-bulb hanging light fixture and the under-counter stools are also vintage.

Blakely gets design inspiration from the use of color, working with clients to find out what they’re drawn to. Her job is to help them embrace color’s intensity in different degrees.

In this case, the creative through line is the choice of black and white in the kitchen and the bathroom, from the geometric floor tiles in both rooms to the black cabinets and white quartz counters, warmed up by the wooden rafters, in the kitchen.

During the several weeks of renovation, the resourceful couple set up a mock kitchen upstairs where they cooked out of a microwave and, temporarily shower-less, took baths in a copper tub. Living through a home renovation isn’t for the faint of heart, as anyone who’s survived it can tell you.

“How do you make their budget work with their aesthetic, ending in a result that will rock their world?” Blakely asks.

In the case of the Wakefield project, the successful answer rocks on.