Inside the life and work of the president of the Rhode Island Hospitality Association, who is rallying for local hotels, shops and restaurants amid the pandemic. 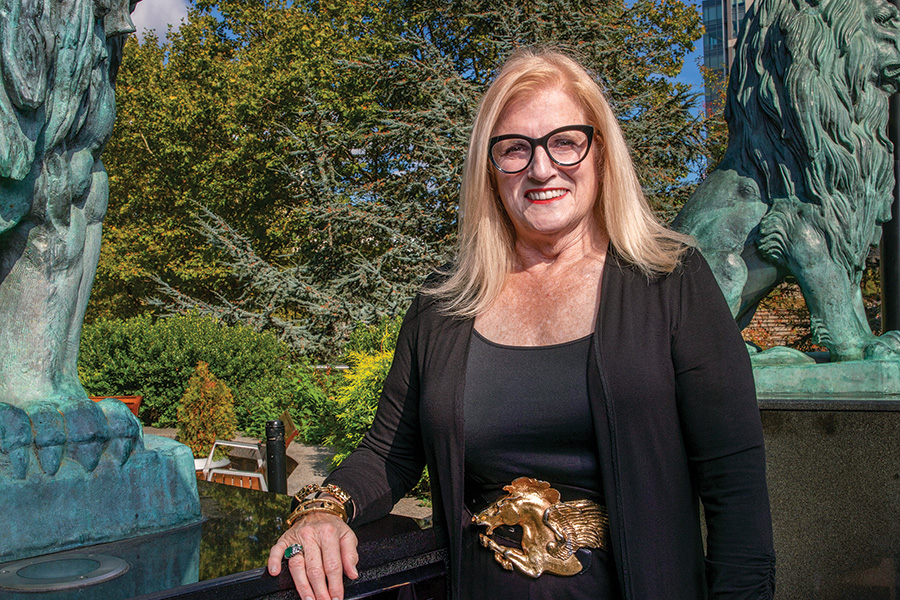 “A lot of neighbors hated the fact that we were very boisterous but they were always there to help,” Venturini says.

She remembers being hungry as a kid, living in a three-bedroom tenement with lack of heat. There were days when all she had to eat was a piece of bread and maple syrup. “I lived for survival,” she says. “When you are in survival mode, you don’t remember things, you just get by.”

Venturini learned quickly about being on-the-ball and proactive. “If I didn’t eat fast, my brothers were on my plate,” she says. Knowing what it’s like to be hungry certainly plays a role in her career in hospitality. “I think it’s unconscionable that we have people hungry in a country like ours.”

At age fourteen, Venturini visited a local dry cleaner looking for work. She got a job and that’s where she met her best friend, Ted Fuller’s future wife, which eventually led to her career path when he co-founded the Rhode Island Hospitality Association. She was out of the house in her own apartment by age sixteen and worked a handful of jobs, including one with the Pawtucket/Blackstone Valley Chamber of Commerce. She took bookkeeping night classes at Bryant University during high school, and took more classes at RISD, where she earned a certificate in interior design. She never used it, nor obtained a degree. “I didn’t have the money to invest. I had to work,” she says, but she thought she might be interested in bookkeeping. “I was fascinated by how people run businesses.”

She took on various roles working for a chemical business in Cranston and then a short stint at a national chemical business. In 1988, she was approached by Fuller, Ned Grace and Bill DeAngelus Jr. about taking over RIHA. In the beginning, they didn’t have enough members to sustain a salary for her, so Grace paid her out of his own pocket. There wasn’t an office then, either; Grace gave her a spot in his East Providence office. “He thought it was important enough to the industry that he paid for it,” Venturini says.

Grace is the only remaining living founder of the trio, and he still stays in touch with Venturini. “Dale is a very tenacious, focused, hard-working, persistent gal. And she’s also very personable,” he says. “She was always able to combine her personality with the task at hand and she impressed us as being a person who would be very successful with the charge of protecting and promoting the Rhode Island Hospitality industry.”

And she’s fashionable, too, with a collection of big hats, eyeglasses and accessories, including her metal belt buckles, that make her vibrant personality shine through.

“Don’t ever go through a metal detector with her,” says Bratko with a laugh. “It’s an adventure.”

“The thing that always amazes me with Dale is the way she carries herself. She is authoritative and strong, but she’s also glamorous, stylish and fun,” say Adamo. “Those things don’t always go together, and sometimes women are penalized for that, but she’s found a way to blend those traits into her leadership style.”

Growing up, Venturini didn’t have enough money to buy clothes, so she sewed her own. Designer labels are not important to her when it comes to clothing or shoes. “I’d rather have more than one,” she says with a laugh. She doesn’t usually get manicures, opting to paint her own nails at home. But she does hire a closet organizer once or twice a year to keep track of seasonal wardrobe changes stored in a bedroom-turned-closet, organized by color.

Even when working from home during the pandemic, Venturini got dressed and coiffed every day, which she says only takes twenty minutes. “It’s about feeling confident,” she says. “I love looking and feeling good. It’s that artsy side of me, and it helps me be ready to work.”

Adamo says Venturini is a mentor for her, especially as she’s fighting for the rebound of Providence tourism. She met her in her early twenties when she was working for an ad agency and RIHA was a client. “I was an up-and-coming woman in a field that was largely male-dominated at the top levels and she always looked out for me,” Adamo says. And now that her own involvement has become more political, Adamo looks up to Venturini even more. “There’s now a nice representation of male and female leaders up there, but I think about how Dale did this twenty years ago and was one of two women in a room full of men. And if she could do that, I can do this,” Adamo says.

Bratko says that as fierce an advocate as Venturini is for the industry, she’s an even fiercer advocate for the people who work for her. “It’s such a wonderful opportunity to work for an all-women run organization because there’s a sense of empowerment and support that I think is an integral part of why we were able to do what we were able to do,” she says.

Singleton and Bratko agree that Venturini treats the five women that work with her as family. While Venturini has nieces and nephews she loves, she and DeFusco never had any children of their own.

“It’s like her child. She built it from nothing. I think that’s why she’s not retiring,” DeFusco says. “I don’t know if she’s going to retire. She has to make that decision. It would be like putting a baby up for adoption.”

Singleton also says Venturini shields the staff from negativity, often bearing the brunt of feedback and criticism alone. Others have said she’s been the target of misogynistic comments in the past, but she just brushes it off and gets back to work. Sometimes DeFusco will hear his wife on the phone and wonder how she deals with it while remaining calm.

“He doesn’t like it sometimes. It’s very hard for a man not to want to protect,” Venturini says. “I say to him, ‘You don’t rescue me. If I need it, I’ll let you know, but don’t rescue me.’ ”

Adamo says she models Venturini when she faces similar pitfalls. “Your first instinct is to fight back but that’s not always the best course of action,” Adamo says. “As women, we always run that risk that if you snap back, then you’re crazy or difficult, so you have to take that extra breath and handle things professionally and rationally, and that’s exactly what she does.”

Venturini’s upbringing amongst so many brothers helped her learn to hold her ground in what was, until recently, a predominantly male political environment. But she still hesitates to take credit for RIHA’s successes. When executive orders passed to allow takeout alcoholic beverages and more lenient outdoor dining restrictions, some never knew RIHA was behind them. Amid indoor dining restrictions, some restaurant owners and groups disagreed with capacity rules and formed an alternative restaurant association to advocate for the lifting of caps on indoor dining. But during that time, RIHA was already working with the state to reopen Rhode Island by Memorial Day. Once that happened, the group quickly fizzled.

“People don’t realize it’s just a small staff,” Adamo says. “I would watch people take credit for what the Rhode Island Hospitality Association had accomplished and it was so disheartening because I knew how hard they had worked on those achievements and goals.”

Venturini also watches out for her and her employees’ safety. No one leaves work alone at night, and as a staff Christmas gift one year, Venturini purchased mace for her staff members. She has her own canister attached to her keys in her Andrea Valentini bubble handbag.

“It’s bright pink so I can find it in my purse,” she says. “I never had to use it, but lately I am thinking about it after all these incidents are happening,” she says about the summer’s rash of violence in Providence. As the pandemic ebbs and flows, now she worries that crime is also affecting the city’s hospitality industry and tourism.

“This whole thing in Providence is troublesome,” she says.

For someone with a high-stress job, there needs to be a release. For Venturini, it’s golf. She loves it not as much for the game but because it gets her out in nature, away from it all.
“I look at the beautiful trees, the grass, the birds, the turkeys, all the critters I can find,” she says.

Several years ago, she was ready to give up the game. She was competing in a couple’s league at Ledgemont Country Club with her husband, but things were busy at work. “I was in the driveway, thinking it was so hard for me to leave work and I just thought I’d take some time off and quit,” Venturini says. “But I met Tony on the golf course, and he helped me along. Golf is the thing we do together.”

That night, Venturini whacked a ball hard with her club from the teeing area and they watched it soar. They couldn’t see where it landed, but they heard the group ahead of them screaming. As they approached the hole, Venturini searched for her ball while the other group shouted and pointed. She walked over, looked in the hole and found it.

“It was like someone was sending me a message,” she says.

Tony just looked at her with a sly smile. “He says, ‘I guess you’re not giving up golf.’ ”

Similarly, she’s showing no signs of stopping at RIHA. Venturini works day and night, especially now that supply chain issues are exacerbated and hospitality staff have been exiting the industry and recruiting a new workforce is necessary.

“There’s no slowing down, because it’s not over,” Venturini says.

When she needs a break, her clubs will be there, ready to take the heat.