The Guild Warren Opens as the Waterfront Town’s First Brewery

The small-batch brewery and beer hall has a food menu and will pour its own Guild-branded beers in addition to varieties from their contract brewers. 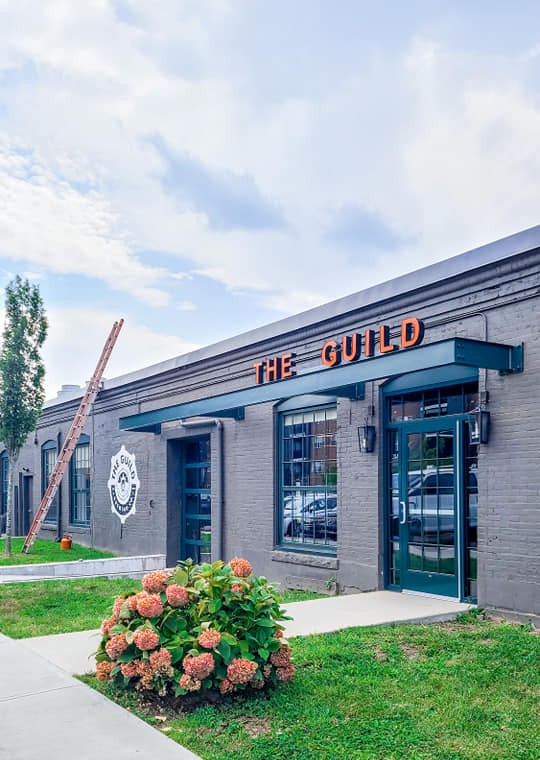 It’s been a long time coming, but Warren is welcoming its first modern-day brewery with the opening of the Guild Warren. The suds on the Schwarzbier are that it’s also serving craft comfort food. The small-batch, seven-barrel beer hall with a food menu opens its doors to the public in a waterfront building near the American Tourister Mills and it will pour its own Guild-branded beers in addition to varieties from their contract brewers including Night Shift, Devil’s Purse, Sons of Liberty and Willie’s Superbrew. They also have a few hard seltzers from partners in cans.

On Friday afternoon, Shawn Gilheeny from Providence Painted Signs stands on a ladder, putting finishing touches on the logos inside the building, while manager and Bristol native Ed Levy walks the floor chipping in wherever help is needed. All the tables and chairs are set up, ready for guests, merch is stocked and the kitchen is ready to crank out nachos, sandwiches and other handheld items with chef Stephen Lima at the helm. They are getting ready to take the plastic wrapping off the draft lines to pour beers for a friends and family soft opening over the weekend. Meanwhile, outside the picture windows, a swan takes off in flight near a kayaker and a great blue heron dips its beak into the bay searching for fish with a waterfront backdrop of Little Island and bobbing boats in the bay. 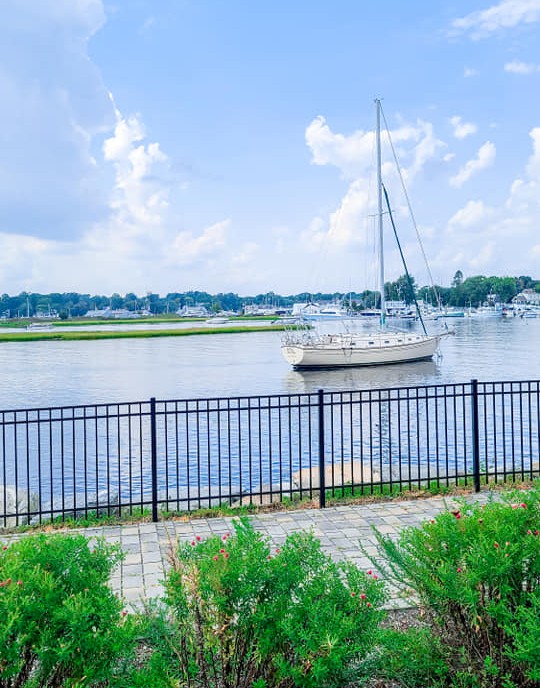 This is the third craft beer outpost from the Guild, including its original facility in Pawtucket that opened in 2017 and the new beer garden established last fall and operating near the Providence Pedestrian Bridge until November 1. Co-owner Jeremy Duffy is excited to finally launch the next addition to he and partner Devin Kelly’s local beer empire, in a location that they originally scouted out first for what later became the Guild in Pawtucket. The Guild Warren has 140 indoor seats and an additional forty seats on the patio, plus a drink rail for standing-room guests who want to take in the view. 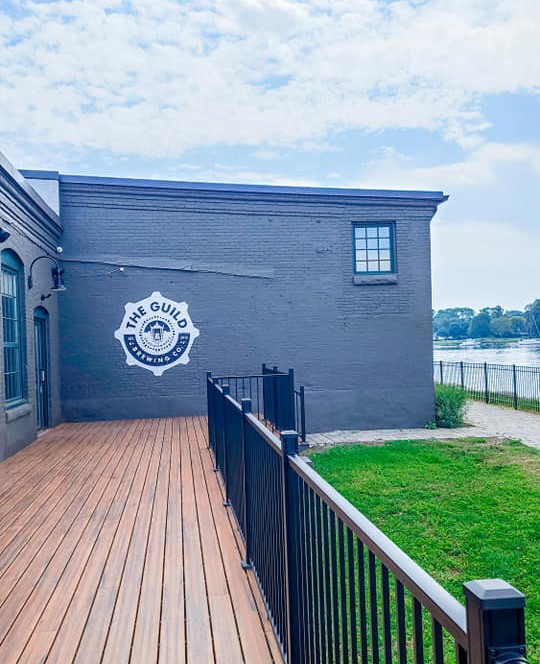 “We are really starting to evolve the Guild Brewing Company as a brand and entity. We have done that at our location in Pawtucket in our beer hall, beer garden and our special events space and now we’re doing that at the Providence Guild PVD beer garden,” Duffy says. “This is an extension of that. We are a gathering space where people can connect and enjoy themselves.”

Duffy sees the breweries and beer halls as welcoming places for the community. Whether you come in with a few friends, sit down with a larger group or bring the whole family, everyone is welcome to soak up the atmosphere and meet neighbors over good food and drink.

For the design of the beer hall, they supported local people as much as possible, hiring Peter Crump, builder/owner of Site Specific for pre-design and carpenter Chris Blank to complete the majority of the work. Glassblower Tracy Glover created the tear drop lighting in her Pawtucket studio, steel signs were cut by Precision Laser in Providence, and Chris Hobbs fabricated all the tables. Susan Dansereau, based out of Pawtucket, designed the accents for the beer hall. “Supporting local was super-important to us because there are so many amazing artists in Rhode Island,” Duffy says. 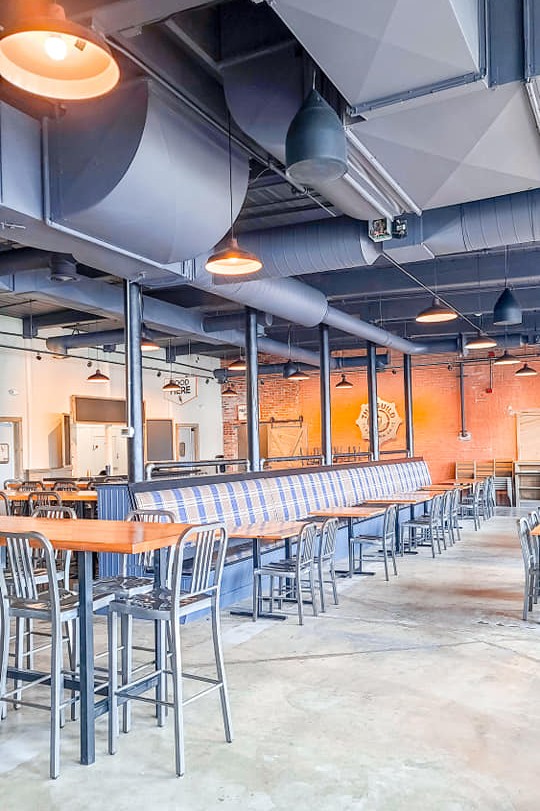 They plan to focus on the Guild-branded beers while also encouraging collaborations with other breweries and Warren restaurants. “What you are going to see is 80 to 90 percent of the beers are going to come from the Guild Brewing Company, and our system will be focused on innovation and collaboration,” Duffy says. “If a restaurant wants to talk to us about creating unique collaboration beers, I’m so willing. We might even call it the Water Street collaboration. We also want to do fun things around charities.”

Partners Duffy and Kelly initially looked at this Warren location as one of the sites for the original facility. “This was going to be the Pawtucket location. The owners loved the concept but they said to do it for five years, then we are going to knock this down and rebuild,” Duffy says. “We weren’t about to do a $12 million project when they were going to knock it down. But it’s amazing that we decided it was time to find a unique, retail setting and this location was being discussed again. It’s fate.”

The apartment building in front of the brewery just started accepting occupants less than nine months ago and it’s completely sold out. Duffy says occupants from the American Tourister building have also been popping in throughout the whole brewery-building process, anxious for it to open.

They will have their chance to sample the suds today. The Guild Warren has ten beers on tap as well as three seltzers from partners available in cans. The brews range from Sons of Liberty’s Chair 2 light lager to Night Shift’s Santilli American IPA as well as the Guild-branded Warren G double IPA, fruited sour Jam Session, Short Schwarzbier and the Isle of White white IPA among others. Willie’s Superbrew is debuting a cinnamon pear hard seltzer too. 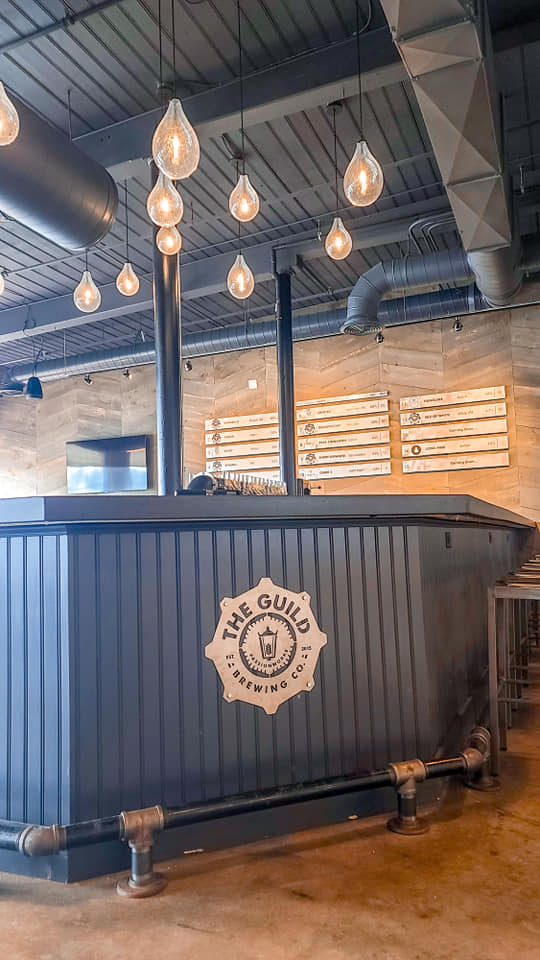 The Pawtucket and Warren Guild facilities will swap kegs from each location. In Warren, the focus is on camaraderie. “We created a concept of a partnership brewery because all these craft breweries were having capacity issues, and we were there to help them grow,” Duffy says. “We were meeting growth demand, and the next phase that is happening in craft beer is community based. I really believe that breweries are taking over for bars, because there’s much more accessibility. We’re going back to the days of English pubs, Irish pubs and German beer halls. They were always community gathering places.”

But even with the vast space, the Guild Warren isn’t quite ready to take on private events. “We would love to have a wedding venue like we do at the Guild in Pawtucket, but it’s not possible,” Duffy says. However, if people want to book space for a group of fifteen to twenty at tables, they can accommodate larger parties. “This space will always be open to the public,” he adds.