Where to watch the game or order takeout on Super Bowl Sunday. 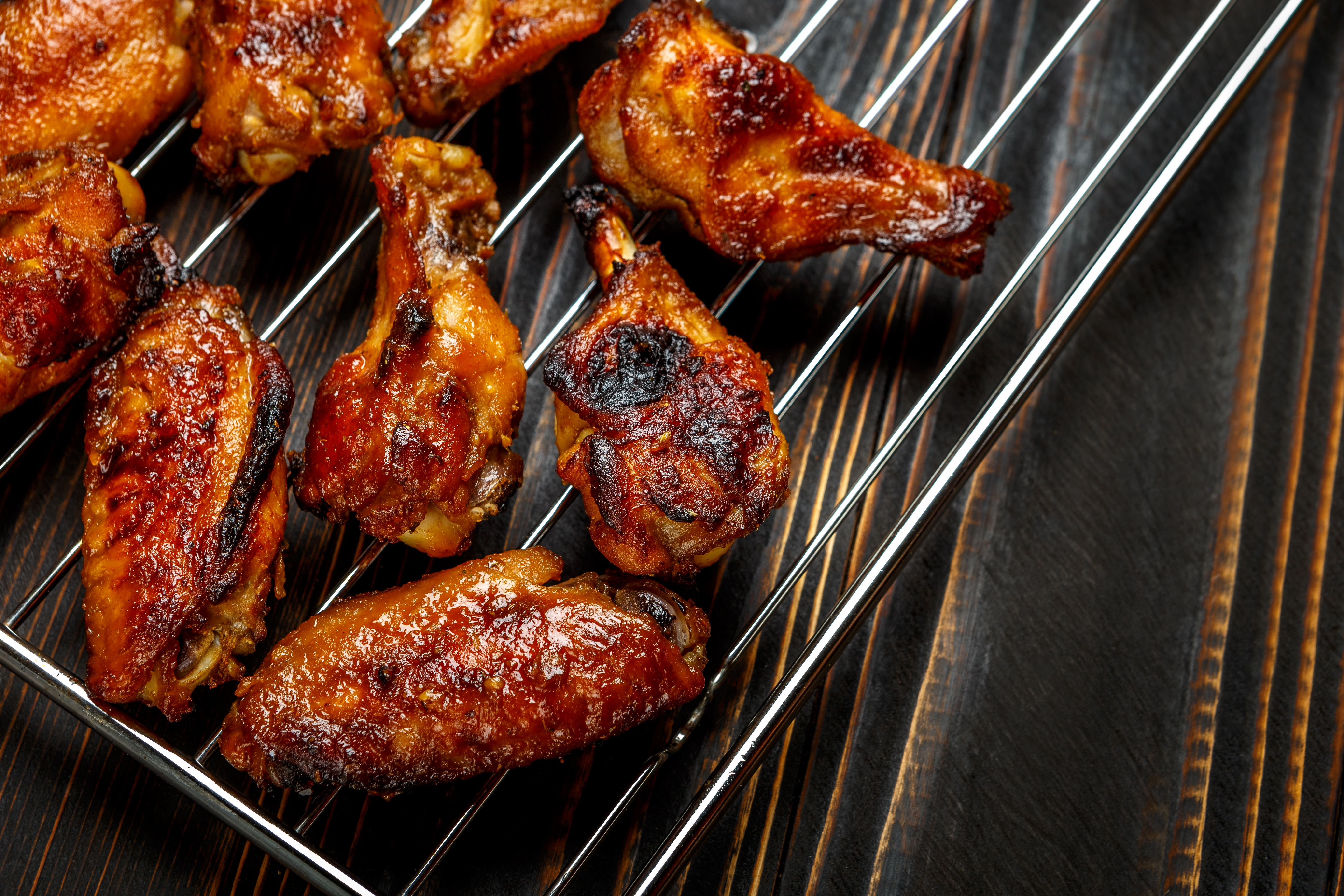 Chicken wings on the grill. Photo by Getty Images.

The Patriots can’t win them all, even though we wouldn’t complain if they did. Just because the Pats aren’t in the Super Bowl this year doesn’t mean that you can’t enjoy the big game. Here are thirteen places to watch the face-off or order takeout from on Super Bowl Sunday.

This year’s game day pie is filled with buffalo chicken with celery root, vegetables and blue cheese in a flaky pie dough crust. Order one of these pies from Chez Pascal and be the winner of your Super Bowl party. This nine-inch pie is already pre-baked, all you have to do is heat up the oven and pop it in. Pies are $35 each, paid in advance. They’re accepting orders until noon on January 31. To order, you can either stop in, call 401-421-4422 or even order online at chez-pascal.com. Pick up your pie February 1 from 4-9 p.m. For more information visit their website.

Oberlin in downtown Providence is making takeout lasagnas for pre-order for the game. The cost varies for the size of the lasagna. To feed two to four people, a veggie lasagna is $35 and a meat version is $45; for four to six people, it’s $65 for a veggie lasagna and $85 for a meat one; for six to eight people, the cost is $95 for a veggie lasagna and $135 for the meat version. You can add a kohlrabi Caesar salad for 412 each. Place your order by January 31 by calling 401-588-8755 or email info@oberlinrestaurant.com.

North restaurant in the Dean Hotel is offering its once-a-year takeout football food menu. It’s a special to-go menu for pickup on Super Bowl Sunday, and it includes orders of tiny ham biscuits (twelve of them for $15); crispy chicken wings with gochugang-buffalo sauce or dry spiced (twelve for $15); dan dan chili (one quart for $20); fried chicken sandwiches (six for $30); slow smoked pork shoulder with vinegar sauce, rolls, black pepper slaw and various pickles ($100 for one set). Or you can order the whole shebang, including one dozen wings, six tiny ham biscuits, one quart of dan dan chili, six fried chicken sandwiches, one smoked pork shoulder , one pint of vinegar bbq sauce, one dozen rolls, one quart of black pepper slaw, one pint of pickles, one tray of miso tres leches cake, all for $200. Food can be picked up from north’s downtown location between 1 p.m. and 530 p.m. on Sunday. Orders have to be in by Jan. 31, and can be sent to foodbynorth@gmail.com.

Need somewhere exciting to go to watch the game? Look no further. Dave and Buster’s at Providence Place is hosting a Super Bowl party. Watch the game while enjoying all-you-can-eat buffalo wings, a nacho bar, unlimited soda and game play and a guaranteed seat that will make you feel like you’re part of the action on their 220-inch TV. The fun starts at 6:30 p.m. and tickets are $39.39 per person. For tickets visit eventbrite.com.

Watch Super Bowl LIV at Providence’s go-to game day destination. Starting at 4 p.m., there will be prizes, promos and raffles. Bring your friends and enjoy the game together while munching on great food and drink specials. G Pub is also offering a special Super Bowl takeout menu for those looking to watch the game from the comfort of their own home. For more information, call 401-632-4782.

What’s a better way to enjoy the big game than by bowling at Alley Katz in Westerly. Watch the Super Bowl in your own reserved area with up to six of your friends while enjoying four hours of unlimited bowling. Enjoy a platter of twenty-four wings with a pitcher of soda. For $69.95 per lane, you can’t go wrong with this deal. Book a lane at 401-596-7474.

Make your reservation now at Ladder 133 in Providence to make sure you’re there to watch the Super Bowl. With raffles, food and drink specials and thirty-three HD TVs, there is no way you could go wrong by enjoying game day here. For reservations call 401-272-7427.

Nothing says Super Bowl more than a free buffet. Head on over to Mirabar in Providence from 5:30-11:30 p.m. to enjoy the game on all seven TVs, including the big screen. Enjoy drinks and free food while cheering on this year’s teams. Best part, no cover! There’s no reason not to stop in and enjoy the game. For more information, call 401-331-6761.

It’s Super Sunday at Bettola in Cranston’s Rolfe Square. Starting at 3 p.m., enjoy the end of the NFL season with Bettola as you dine on a variety of specials such as the Saucy Bowl wings, with two flavors inspired by the two opposing teams Kansas City and San Francisco. Pitchers of Peroni and buckets of craft beer will be available through the night while you watch the game on three flat-screens. Bettola’s Mug Club members will enjoy a second beer free along with an order of free wings. If you’d rather stay home, no problem, just make sure you place your takeout order at least twenty-four hours in advance, and catering orders forty-eight hours in advance due to their high volume of takeout orders. Buy any two pizzas and get a free order of wings. For more information, to make reservations or order food, call 401-522-5222.

Enjoy fifty-cent wings while watching the football event of the year at Pawtucket Patriot Bar and Grill. Not to mention you can also enter for a chance to win a $100 Pawtucket Patriot gift card with the square game. Join Pawtucket Patriot starting at 6:30 p.m for a night full of food and fun. Call 401-722-1934 for more information.

11. The Burgundian Waffles at LineSider

Nothing goes together better than waffles and beer. LineSider Brewing in East Greenwich is hosting Burgundian Waffles for a Super Bowl experience from 4 to 8 p.m.. Whether you’re looking to eat brunch, dinner or even just looking for some great company and beer, LineSider is the place for you. Call 401-398-7700 for more information. 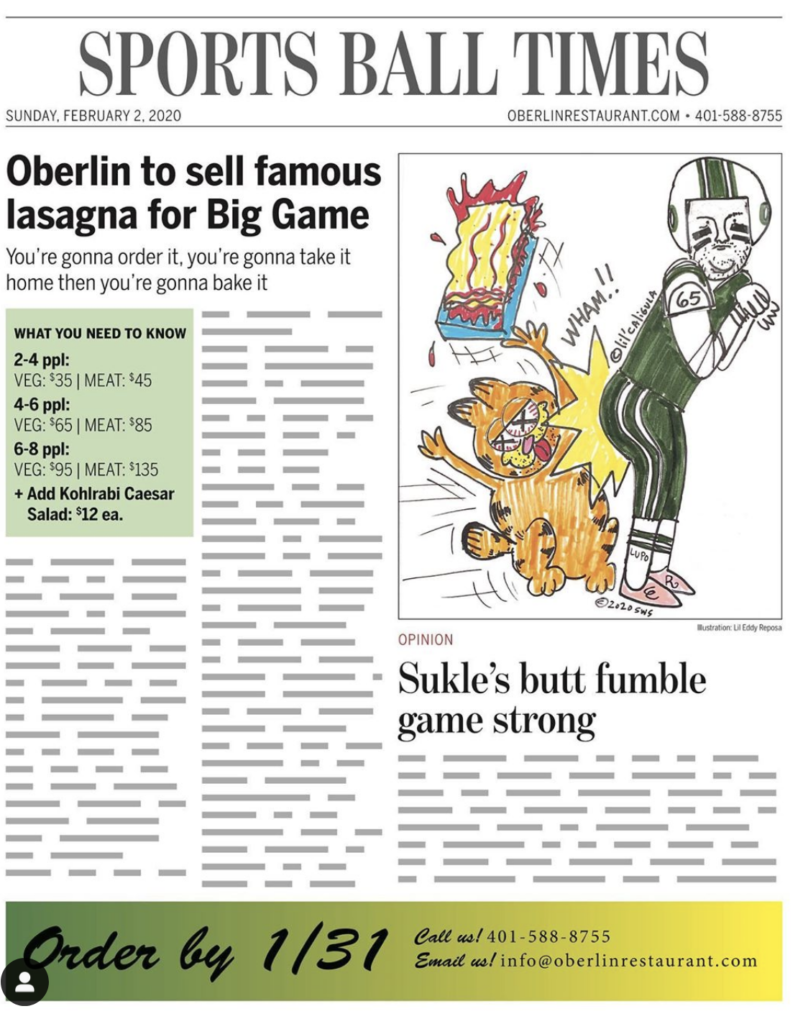 12. The Duke Kitchen and Spirits

Jello shots, finger sandwiches, fries, mac and cheese and hot dogs all for only $2! The Duke Kitchen and Spirits in North Providence is hosting a Super Bowl party 6:30-11:30 p.m. The Duke is giving away hats, t-shirts and glasses and you might even be the lucky winner of a liquor basket, wine coolers or even a flat screen TV. With drink specials such as $12 beer buckets and $5 margaritas, the football game isn’t going to be the only thing that is super. Call 401-349-3012 for more information.

Don’t be trapped at home on Super Bowl Sunday, go get trapped at the Trap and Safehouse in East Greenwich from 5 p.m. to midnight. With twelve TVs tuned into the game you won’t miss a second of the action. There will be raffles every quarter, beer pong, cornhole, outdoor firepits and TVs and even some great giveaways. Every purchase of a Bud Light gets you a raffle ticket and another chance to win. Call 401-885-4999 for more details and to book a reservation.

Football’s biggest game of the season is about to take place, why not watch it with Tiverton Casino 6:30-10:30 p.m.? Think you know who is gonna win? Bet on the game using the Sportsbook RI app. Enjoy watching the San Francisco 49ers and the Kansas City Chiefs battle it out while enjoying beer, craft cocktails, martinis and more. Call 401-816-6000 for more information.