Blues get dismissed as trash fish, but one determined home cook proves we’re missing the boat.

They step off tubs built with flattened hulls, carrying a lobster or two that hadn’t followed its friends up to the Gulf of Maine, scowling in the late morning sun, one eye on their coffee and one sharper eye on the seagulls and terns cruising the low thermals over the Narragansett Bay. They’re waiting to see what those seagulls are seeing, waiting to see if they group together above a darkened and exploding patch of water.

If the seagulls launch themselves toward that water in rapid Kamikaze dives, the lobstermen know it’s because there are jumping bay anchovies breaking the surface like wet and stinky French fries, springing wildly from the sea in one last-chance escape. They flee the big yellow flashes cutting through their school like tracer rounds, illuminating individual anchovies crashing into each other head-first, or getting sawed in half, all trying to make it out of the water just as the lazy birds zero in with open beaks and growling stomachs. 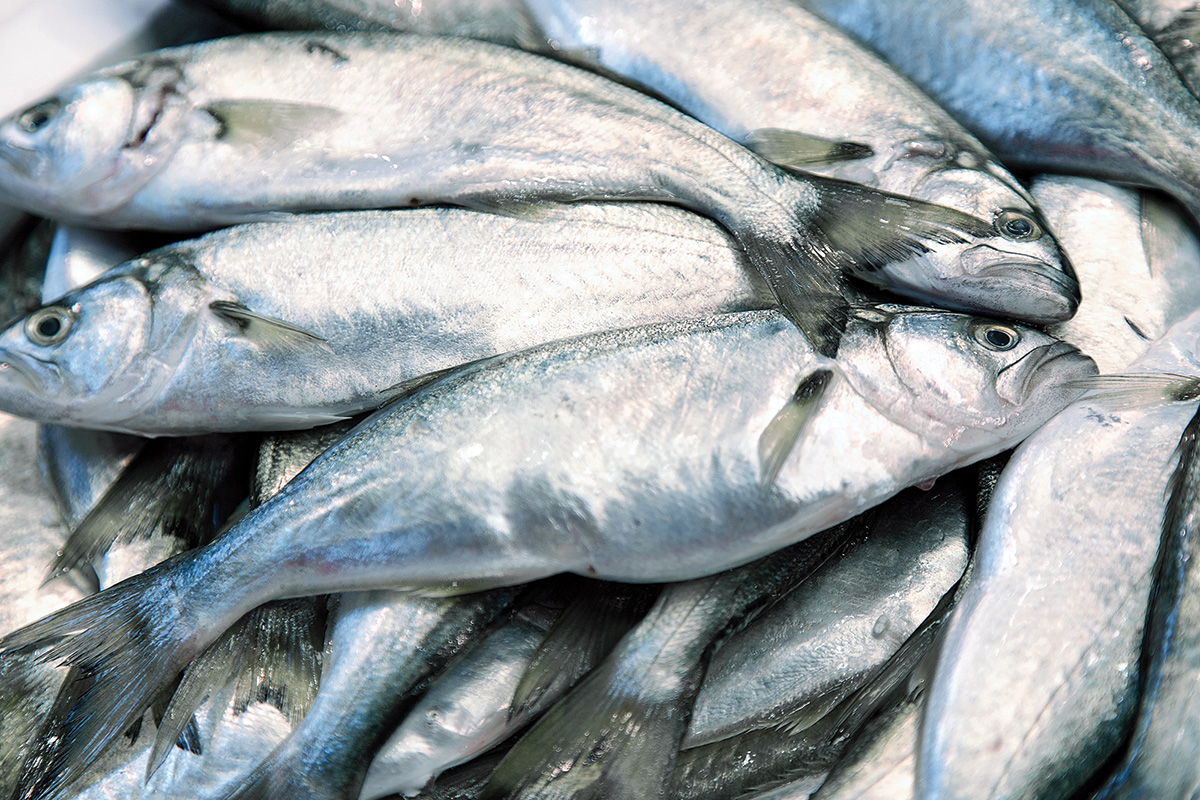 It happens so fast a tourist might need an explanation, and a seasoned fisherman might say, “A massive school of bluefish has worked itself into a frenzy underwater on the anchovies’ blood, and now they are ready for a fight.”

Boaters wait in the waters. Men wait on the docks. With fishing poles in hand they look for the seagulls. It’s a tense moment when the first bird torpedoes toward the water. Is it a false alarm? No one moves. But then seagulls appear from every direction, dozens of them screaming like paupers in a bread line, and every boat follows them toward the hunting ground. It’s over in thirty seconds. The sea is red with blood. The seagulls disappear as fast as they arrived. And a thunk of thick meat can be heard bouncing on the bows and sterns of any boat lucky enough to have gotten to the killing field in time.

Then, no matter who you ask the question: “Do you eat all these bluefish?” the answer is always the same. “They don’t taste good.” Even Michelin star chef Eric Ripert is emphatic: “A lot of people make fun of it.”

I’ve always taken this bit about bluefish as gospel, but for the endless months I quarantined on Jamestown, with no internet and no friends, I put this theory to the test. I asked a few fishermen at the Jamestown harbor for bluefish and they couldn’t have been happier to pass off their bounty. Everyone loves the fight bluefish put up but no one wants to eat them.

Back home, I first worked with the common knowledge that bluefish are an oily, fishy tasting fish. The way everyone combats this is filleting the fish and covering them in mayonnaise. After twenty-four hours of “marinating,” I cooked the fillets on a grill. Not good.

The next day, I made a brew with curry, hot sauce, salt, pepper, oranges, basil, peppers, onions, garlic cloves and some white wine. I threw the ingredients into a pot on the stove until the liquid reduced into the bluefish. The result was better but still not good.

The bluefish were now three days old. I’d had them iced up and cleaned since I brought them home but, even someone like me who views fish in Third World street markets as a dare, seventy-two hours was pushing it. It was my last chance to get this right.

I built a beach fire and thought about all the spices and sauces I’d used the previous days and how none of them fared well. Why was I listening to everyone else’s advice? Bluefish are a simple fish. They live off the delicacy of bay anchovies. They drink the salt of the bluest waters on earth. Why was I trying to complicate this natural order?

I soaked the remaining bluefish in a bag with twelve ounces of Corona, a little garlic and some lemons while I built up the beach fire. No frills. I knew my mistake so far had been trying to mask the fish. This time I wanted to taste its plasma. The oil in the cast iron skillet I was using started to crackle as it heated. I dumped in the bag of fish and watched a magnificent reaction take place. A golden hue painted the pot, and suddenly the aroma of fish and beer and garlic became as lovely as Grandma’s house on a high holiday.

Then I ate. I picked the hunks of meat out of the skillet, still sizzling, and they fell off any bones I’d missed like a soft cheese. The fish was as decadent as expensive fondue, juicier than pork belly, had more bite than any fluke or bass. It was the most delicious thing I’d ever tasted. I sat on that beach and felt as if I had been let in on the best-kept secret. Barehanded, I dropped pound after pound of fish into my mouth. I ate and ate, and then I ate some more, riding the high of going against the prejudices of society and proving them wrong. It was one of the few moments of victory you might get once or twice in a lifetime. I lay there on that sand like a walrus in ecstasy, belching and half-asleep, trying to memorize what it felt like to be right.

Of course, with great knowledge comes great resistance. Eventually, I went up to the house and let my tribe know that everyone was wrong and bluefish were actually delicious. “I’ll pass,” was the response. And everyone happily ate Costco shrimp and tilapia for dinner, all the wiser and still uninterested in the endless supply of bluefish just out the back door.