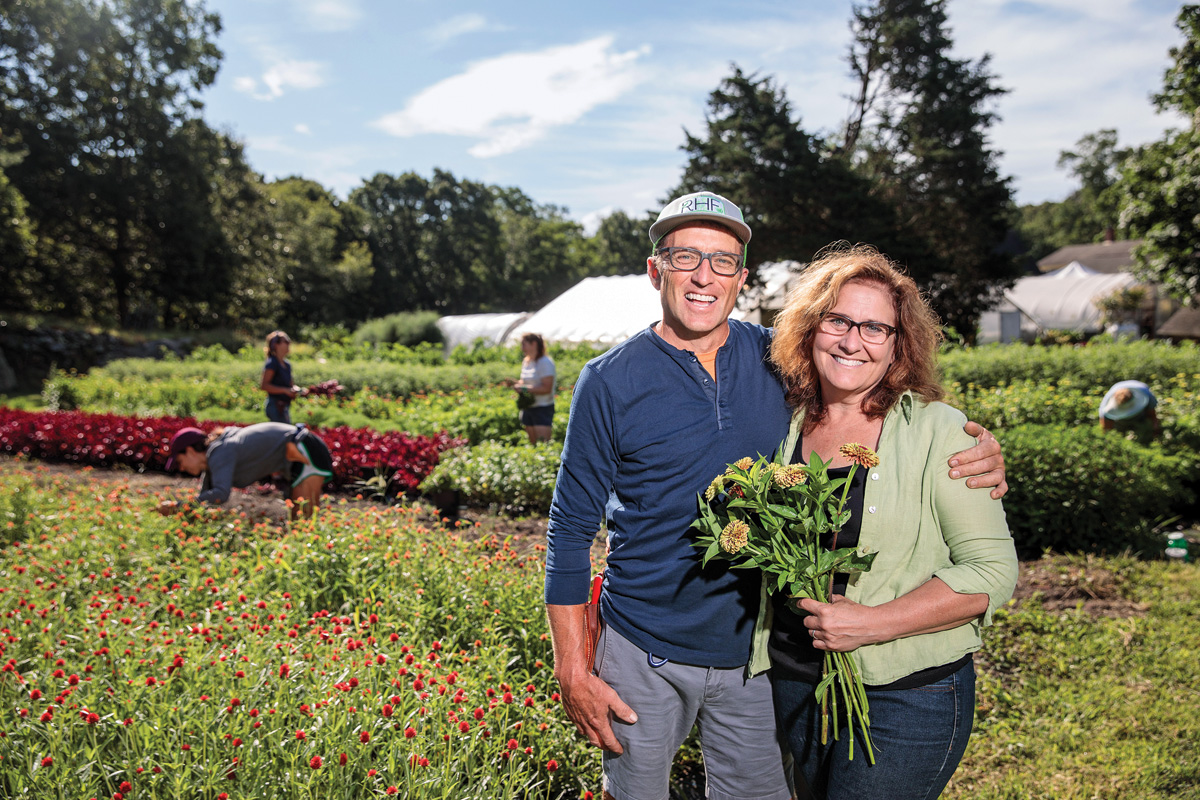 Mike and Polly Hutchinson at Robin Hollow Farm in Saunderstown. The farm has been in business since 2005. Photography by James Jones.

Those instagram images many people conjure when picturing a flower farm — the lush, colorful fields undulating with blooms as the gentle farmer works her way through each row, a basket on her arm and clippers in her hand — isn’t quite reality. At all.

“It is hard. One hundred percent,” says Polly Hutchinson of Robin Hollow Farm in Saunderstown. “People have no idea what’s involved.”

Flower farming is not gardening and, while beautiful, it’s not all dainty and delicate. Flower farming is just that: It’s farming. It’s a year-round business that can entail fifteen- to seventeen-hour days during peak season and hours of planning, prepping and networking in the off-season. “We like to joke that we go down to a fulltime job in the winter,” Polly says. (Another fun fact: Water weighs eight pounds a gallon, and flowers — whether in the field, in the studio or at market — need a lot of water.)

While it’s physically and mentally taxing, Polly and her husband, Mike Hutchinson, love what they do. “Why whine when you get to work outside and you get to be around beauty all week long?”

The Hutchinsons established Robin Hollow Farm in 2005, but their farming history goes even deeper. The couple began in the early ’90s at Casey Farm, when they launched its CSA program and were certified organic vegetable growers. 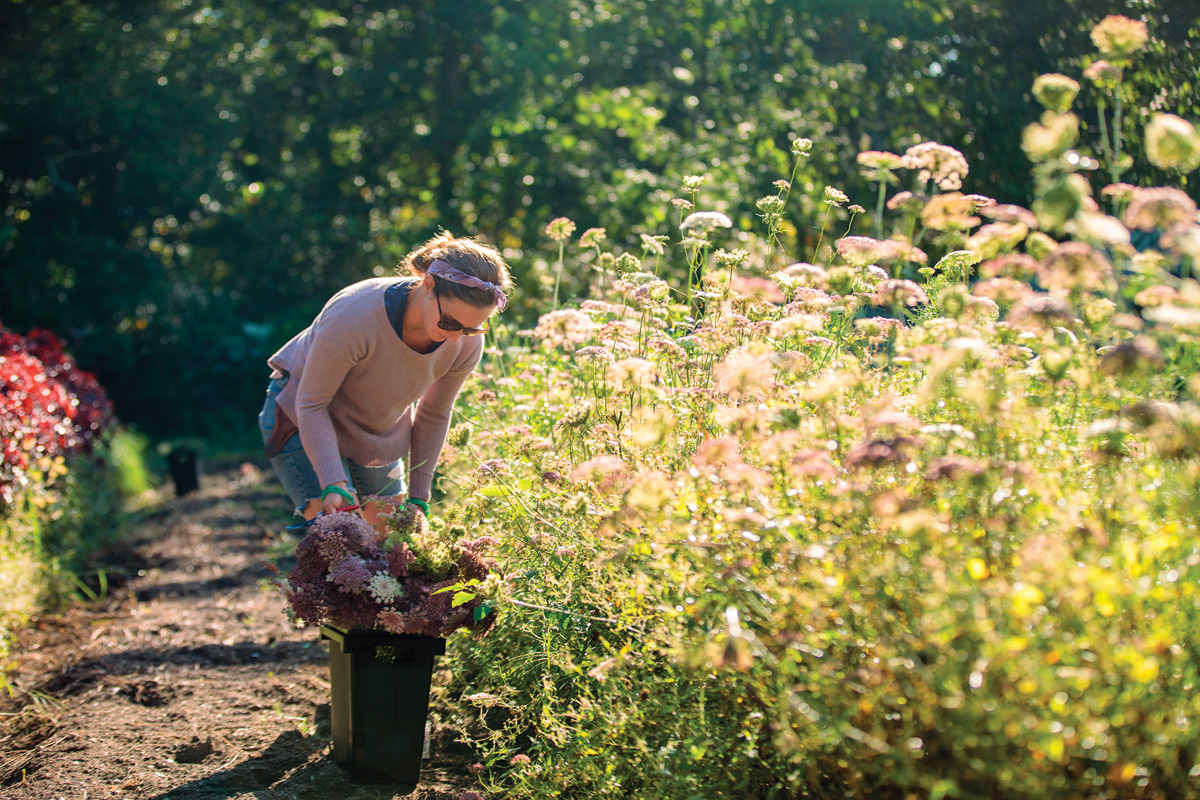 “When Mike and I started, organic vegetable farming was super uncommon,” Polly says. “Also, it was one of the first CSAs in the state and it wasn’t even all that common across the North-
east.”

After fourteen years at Casey Farm, the couple wanted to start their own farm, but the idea of directly competing with the state’s other certified organic vegetable growers — their friends and fellow farmers — wasn’t appealing. So, they contemplated alternatives.

At the time, says Polly, “nobody else was doing flowers — literally nobody else — to the point where one of my dear friends, who is a vegetable grower, told me, ‘You can’t make money doing that.’ ”

The difference, she explains, is the crop, which demands more post-harvest care than vegetables and is extremely fragile. “It requires a real commitment, but we were already pretty good growers.” 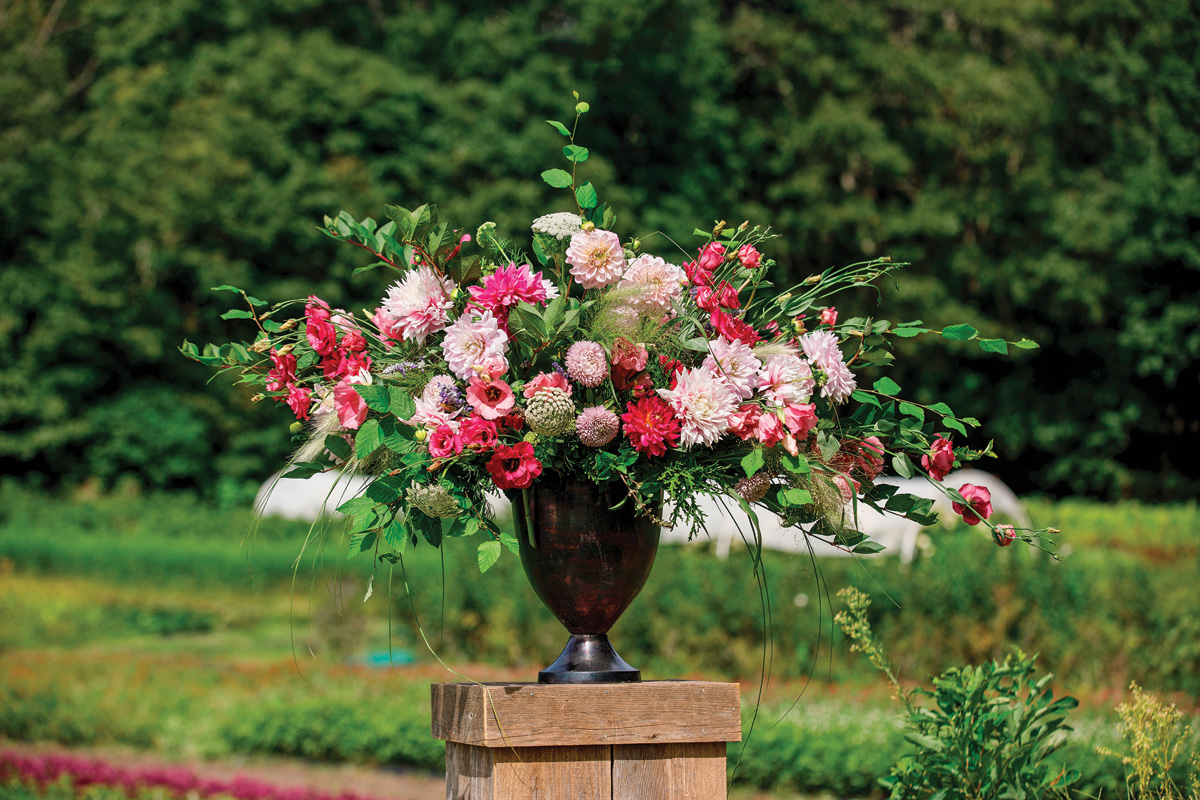 Initially, Mike stayed on at Casey Farm and Polly got Robin Hollow going on her own. “I just kept thinking, ‘I have to work as hard as I can because people are going to be starting farms right behind me. I’m not going to have this advantage for very long,’ so I just cranked,” she says. About five or six years after she started, other flower farms did begin popping up. “I was pretty amazed that we had the whole market that long.”

Robin Hollow sells at three farmers markets in the summer, they sell to a limited number of florists and they do design work — a lot of design work. During peak season the farm employs as many as ten people. Last year, Robin Hollow Farm did ninety weddings and events, ten fewer than the year before. “As they get bigger, we do fewer of them,” Polly explains.

The Hutchinsons have been at their current location on Gilbert Stuart Road since 2007. They farm about four acres total, a combination of land they own and land they lease from the Narrow River Land Trust. They grow more than seventy different varietals and up to twenty colors of a crop. There’s eucalyptus, lisianthus, salvia, mountain mint, tulips, daffodils, peonies, hydrangeas, viburnums, hellebores, hyacinths and so much more. “We don’t grow carnations and we don’t grow roses, but we grow pretty much everything else,” she says. “It’s great and it’s exciting. We’re never bored, and that’s why Mike and I love it.” 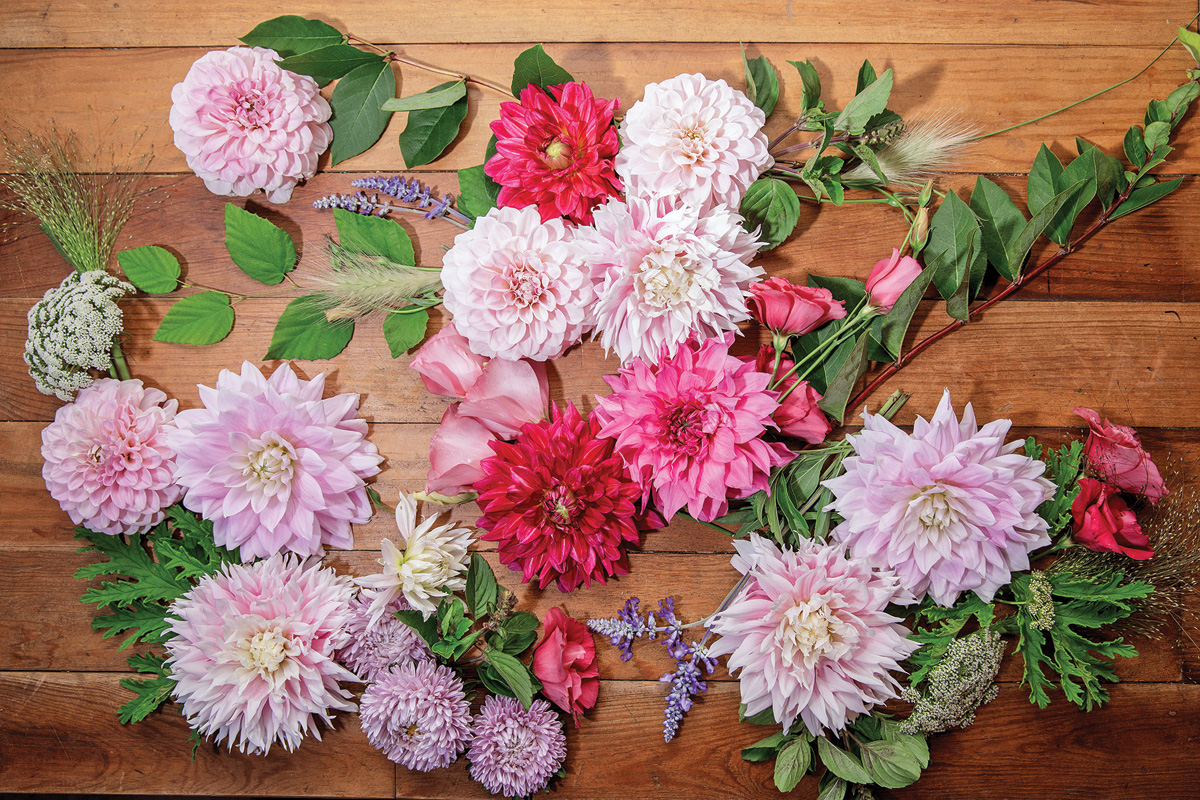 Late-mid season:
Cutleaf coneflowers (Rudbeckia laciniata) grow six to seven feet tall, making them ideal for the back of a border. “The foliage has a really interesting cut leaf shape and they have strong yellow petals with a green nose. They provide seeds for the birds and are a great pollinator.”