There is no greater anomaly than a restaurant on Federal Hill that’s not Italian. The unicorns of Atwells Avenue, they dot the landscape with enigmatic unfamiliarity. Isn’t the point of a night at DePasquale Square to rate the parms and the piccatas?

Saje Kitchen is not making any pronouncements about being the outcast of the family. With its white stone bar, black ceiling and green velvet accents, it can readily pass for a classic Chianti-pouring favorite. But you’d have to ignore the wall of foliage in the doorway to truly believe Saje was old school Italian. It’s this bucolic six-foot invite that puts a rustic foot forward and proclaims its allegiance to one of America’s most iconic cuisines: Southern food. If it began as the food of humble households, meat and threes have been raised in the twenty-first century to cult-like status. What started with Edna Lewis has expanded into northern homes with the help of Toni Tipton-Martin and Lazarus Lynch. The simple has become sublime coated in cheese, barbecue sauce and buttermilk. 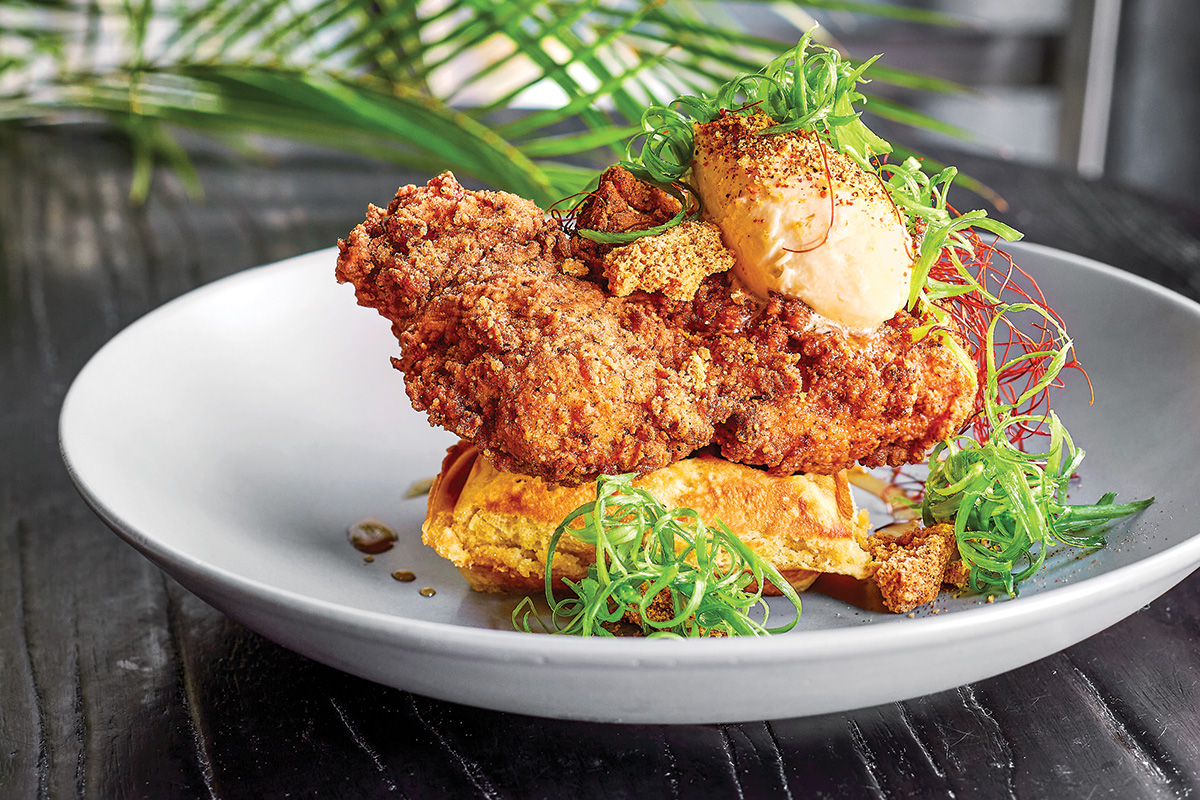 Southern food has a way of making even city folks up north feel at home. There’s a certain spell that low and slow cooking creates, a pace that people will default to, not only because it’s in their blood but because they want it to be. No one knows this better than Alexander Willis, who heads the kitchen at Saje. He hails from Alabama but spent years training in Chicago before returning to his roots full-time. Willis makes no bones about his love for the unassuming character of low-country cooking, but he is intent on securing its elevated spot in the restaurant community.

The staff is all about hospitality, determined that the party will go on even with partitions and limited capacity. Regardless of weather, cocktails are a summer cookout in a cup: tequila is tinged with blueberries, gin is shaken with pineapple and mezcal is softened with a hefty dose of pureed watermelon. If the mixers aren’t celebration enough, they come packed with dry ice, smoking and bubbling as they arrive. It’s a sign of things to come.

There is so much inventory in Southern cooking that it’s impossible to cover every base, particularly given that Willis has his sights on pushing historic food into the future. But he manages to re-envision archetypes without forsaking them. Deviled eggs ($11) — which conjure rabid enthusiasm at their most basic — are topped with lobster and sprinkled with lemon brioche crumbs. Tuna crudo ($17) is served like a minimalist fan atop buttermilk with benne seeds. Even skewered chicken with Alabama white sauce ($13) is plated in as demure a manner as barbecue can envision. If all of this tastes like your childhood cookout, it presents like a stroll through a museum of contemporary art. 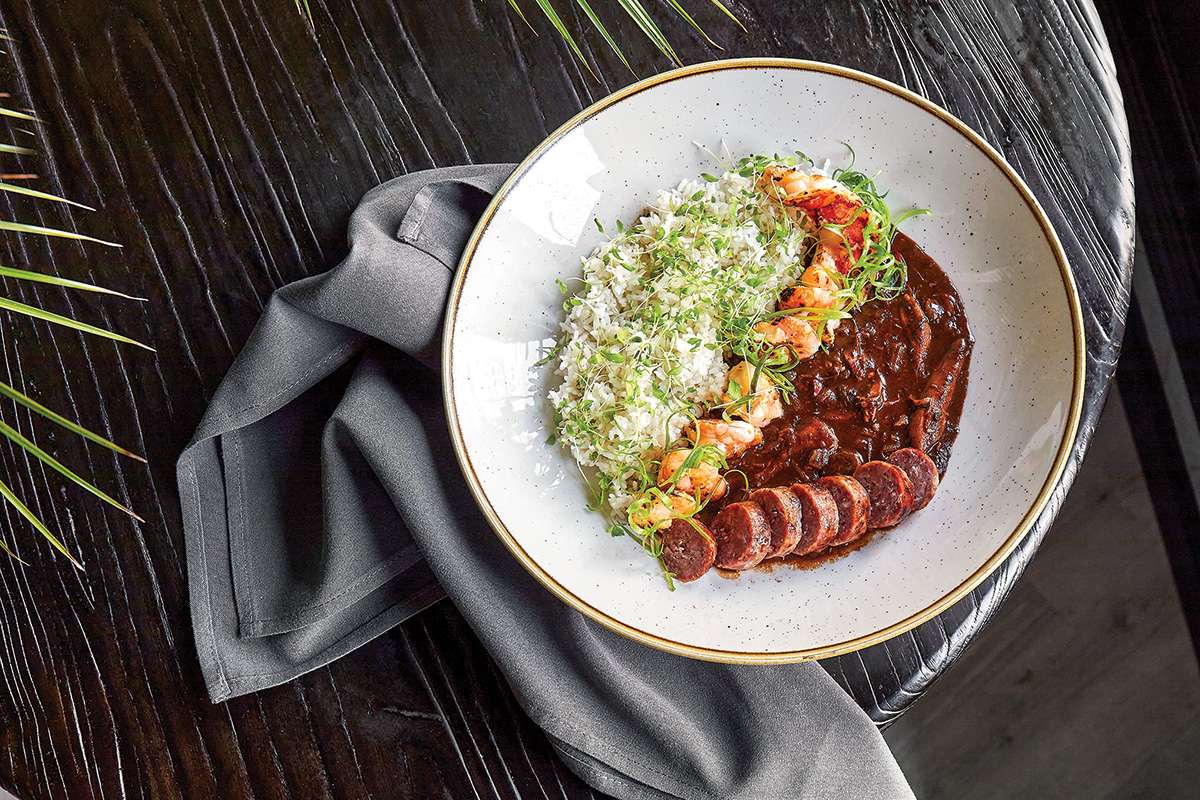 But to sell Southern soul without the icons is like Lynyrd Skynyrd refusing to play “Free Bird” and Saje knows it. Sure, you can take liberties with chicken wings or waffles, but the originals are so enduring that each subsequent rendition risks falling short. Willis, however, came to play. Wings ($15) are fried three times and shellacked with sweet potato caramel until they crunch like salted candy apples. Mac and cheese is a side dish (as the South dictates) and, while it’s topped with crushed Cheetos, its gruyere-forward nuttiness puts it firmly in the adult world. If pimento cheese on biscuits sounds like too much of a time warp commitment, the kitchen has you covered with a plate of blistered shishito peppers with the bright orange cheese on the side.

The toggling back and forth between comforting dishes and those more experimental comes naturally to the young servers. They enthusiastically champion the calamari for those who can’t bring themselves to branch out, and suggest the $80 table-serving rib-eye with mole pasilla and duck fat confit potatoes. But the best dishes on the menu need little cajoling from anyone. No one needs to be convinced to eat a barbell of fried chicken sitting on a waffle ($21) — it self-advertises. And yet Willis still wants to turn the volume to eleven, topping the seriously crunchy chicken with bourbon sage butter and chili-maple crumbs. No wonder we’re all desperate to claim this dinner-dessert hybrid as our own. 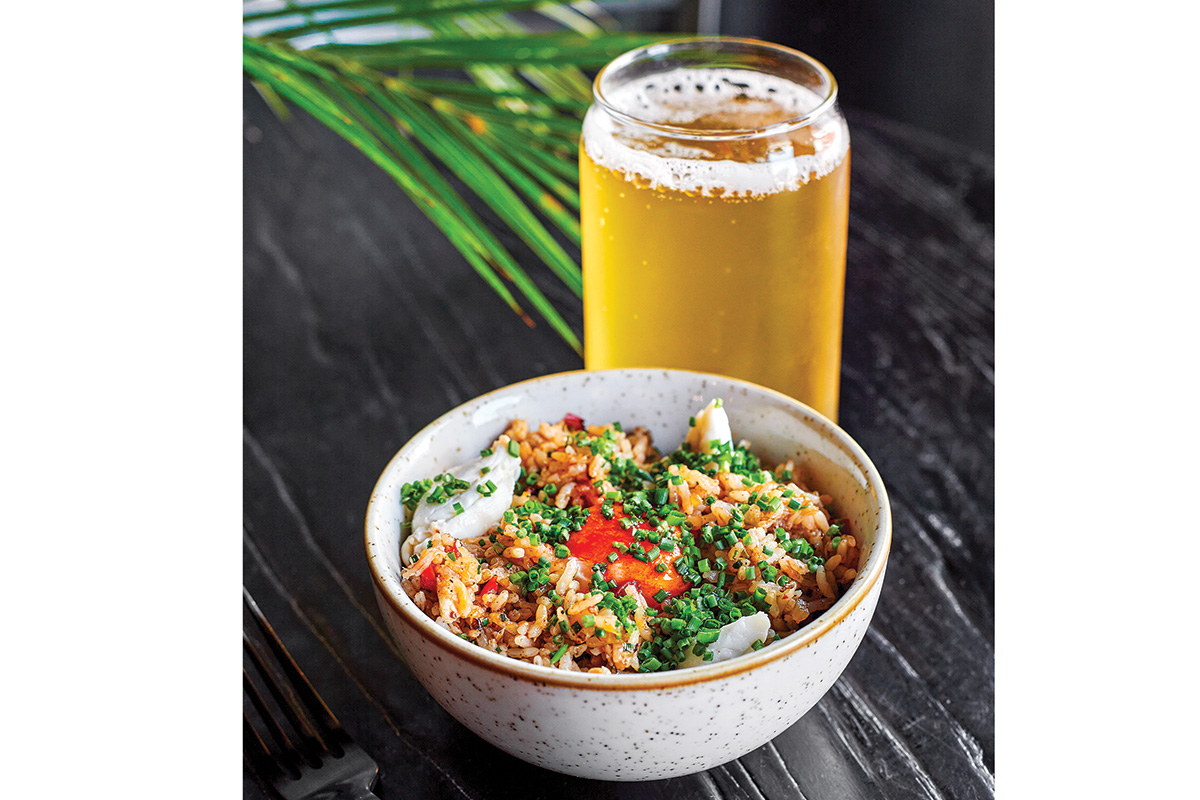 The restaurant’s crowning glory, however, takes a totally different tack. Chicken and dumplings ($16) come to the table in a trough-sized shallow bowl, looking almost like a serving of gravy ornamented with slivers of baby radish and microgreens. What lies beneath is an amalgam of confit chicken, dumplings barely bigger than a plump pea and a just-cooked egg nestled in the center. It’s reassurance personified, a plate of everything we’ve ever loved and the promise that it hasn’t been taken away, even in current chaos. Everything about Saje, in a sense, is a different walk down the same path we’ve chosen: the sky shines just as bright but filters through the leaves differently and with pronounced warmth.

Depending on the lens, Saje isn’t really all that different from other restaurants on the Hill. The most successful draw in crowds because they render yesterday an infinite expanse of time in a single bite of food. For some of us, that comes in a platter of pasta; for others, it’ll always be seared shrimp in a pond of sweet grits with a shake of hot sauce (or, in Willis’s world, a drizzle of herbaceous oil). 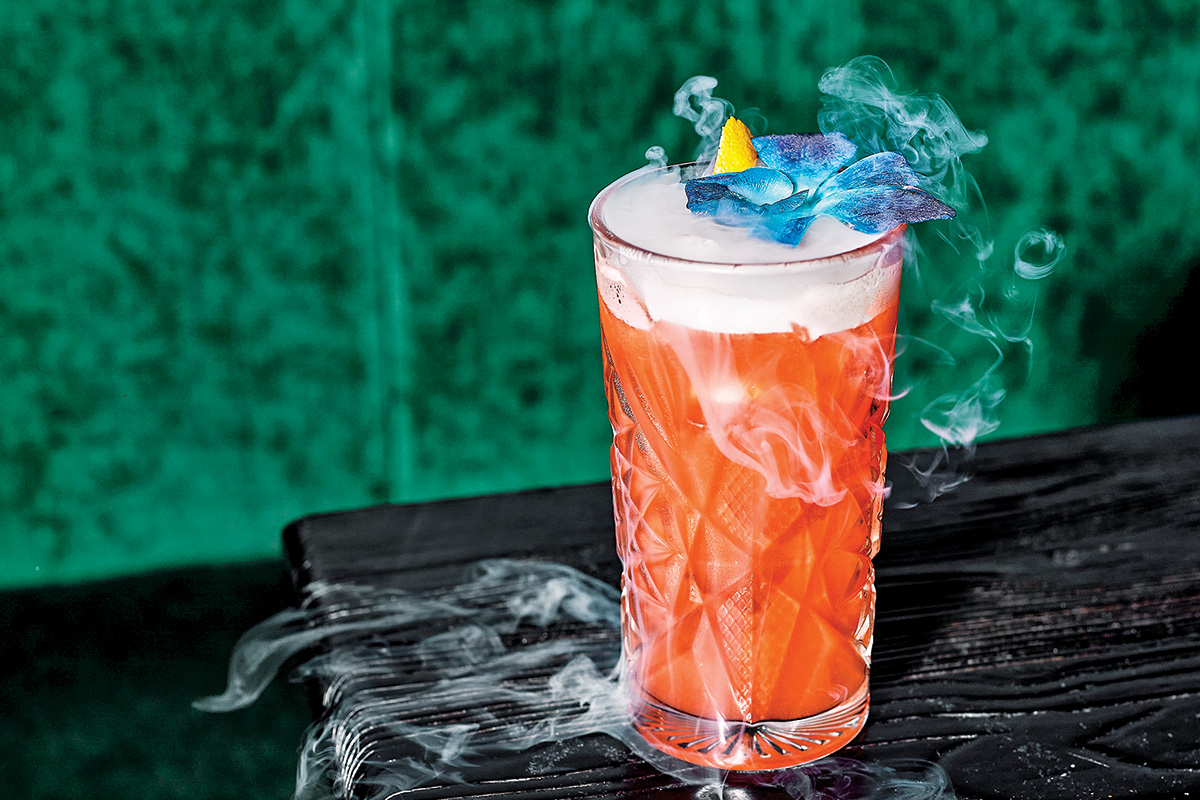 The experience may not be entirely transportive — the soundtrack overhead leans more toward house music than anything born out of the Delta — but Atwells may need to ease its way into a cultural shift. Easy enough, as this is food that spans the centuries and isn’t too concerned about trends. Maybe the quickest way to cross geographic lines is with a simple bowl of something sweet. Oreo beignets ($11) eat like hot doughnut holes and peach cheesecake ($8) tastes like a panna cotta covered in fruit crumble. And for the occasional lucky person, the bar might just send over a shot of Tito’s and schnapps, not to wash it down but to soak it up.

32 Atwells Ave., Providence, 473-0504, sajekitchen.com.
Open Tues.–Sun. for dinner. Wheelchair accessibility requires one step through the front door. Street parking.
Cuisine Southern soul through a modern lens.
Vibe Federal Hill to the eye; Mobile to the tastebuds.
Prices Appetizers $11–$17; entrees $15–$28 or $42–$80 for a family-style platter; dessert $8–$11.
Karen’s picks Chicken, in any form. No joke.
.