Even diehard carnivores will find something to savor at this sprawling new vegan emporium.

Plant City is less a restaurant and more a holistic concept. Though it does have nearly half a dozen food options under one roof, its goal is the same in every corner of the modernized industrial building: live healthier, both body and planet. The endeavor was a massive undertaking — not only by Matthew Kenney, who’s opened three dozen other restaurants from Sáo Paulo to Sydney, but also by local investors and a staff who will advise on a leaky gut as readily as their favorite dish.

There are five different eateries on two floors: a coffee shop, burger bar, build-a-bowl cafe, Mexican bistro and Italian restaurant. Oh, and every bite is proudly vegan. Kenney’s menus are aggressive; he’s not hiding behind lettuce leaves and sunflower seeds, nor is he suggesting an alternate American diet. In fact, he’s radically re-engineering staples in plant form, swapping out the building blocks but leaving the edifice intact. Nachos parade out in indulgent manner, burgers are presented in behemoth form and pizza is constructed out of cashew, rice and macadamia cheeses. It’s like telling a new homeowner that they can have the center hall Colonial they’ve always dreamed of but it’ll be made out of cardboard and moss and, oh, it’ll be far more impervious to wear. 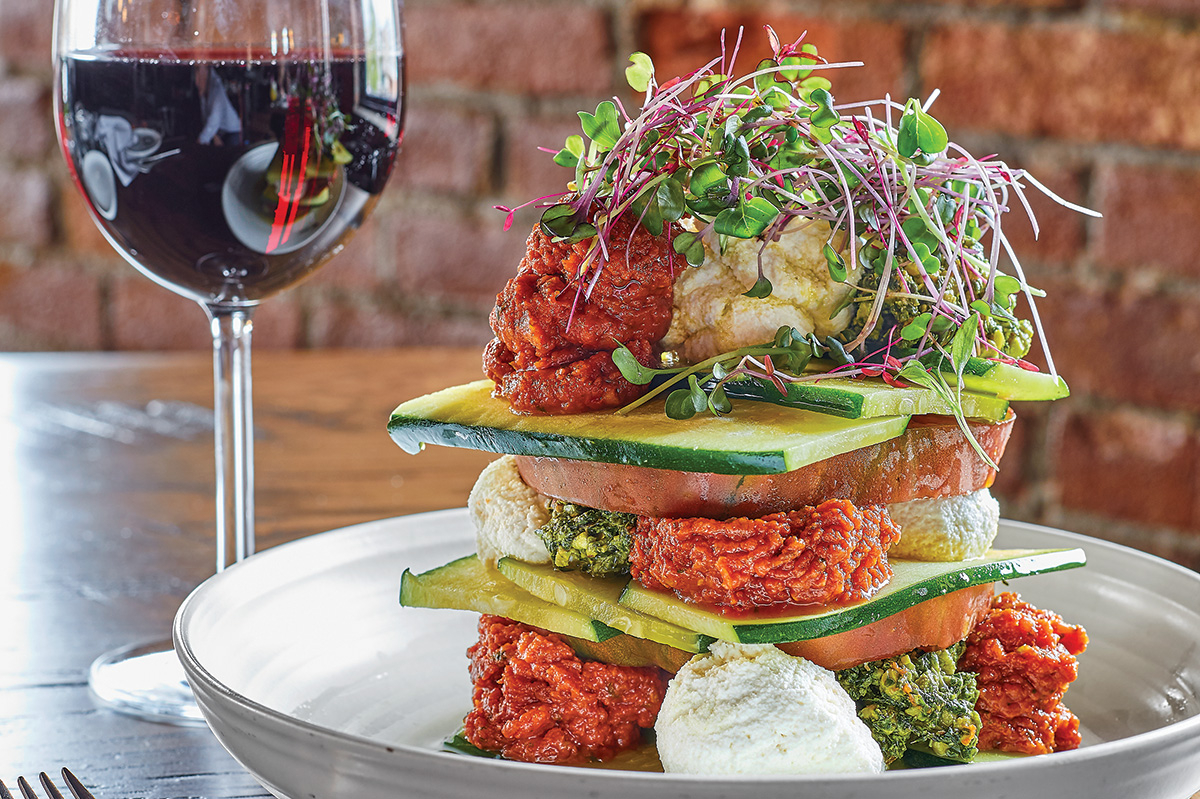 It does, however, come with a price tag. A gluten-free pizza can cost anywhere from $17 up to $21 and, if you balk at it, you’re already behind the eco-friendly revolution. “We’ve collectively made the price of a cow dirt-cheap,” says a Brown student to her companion. “If, as a country, we turn our attention to comprehensive plant production, then the prices will come down.” Even eavesdropping solidifies Kenney’s plan to radicalize not only the American diet but its agricultural sector. It’s possible we are the most resistant consumers to give up meat given that Kenney’s set up shop in as many international countries (including Dubai, São Paolo, Costa Rica and Sydney) as in U.S. states.

It’s futile to try to rank the Plant City restaurants because they’re not designed to be in competition with each other; they’re meant to appeal to the various moods of a committed (or ambling) vegetarian. New Burger goes right to the core of continental cuisine, reimagining burgers, chili cheese fries and cheesecake without the assistance of animals. Big, soft buns, sweet ketchup and endless draft beer harken back to the familiar with such ease that the bait and switch is almost undiscernible. The same is true for Make Out Cafe, which offers a melange of roasted vegetables and grains that are already established in the American lexicon. 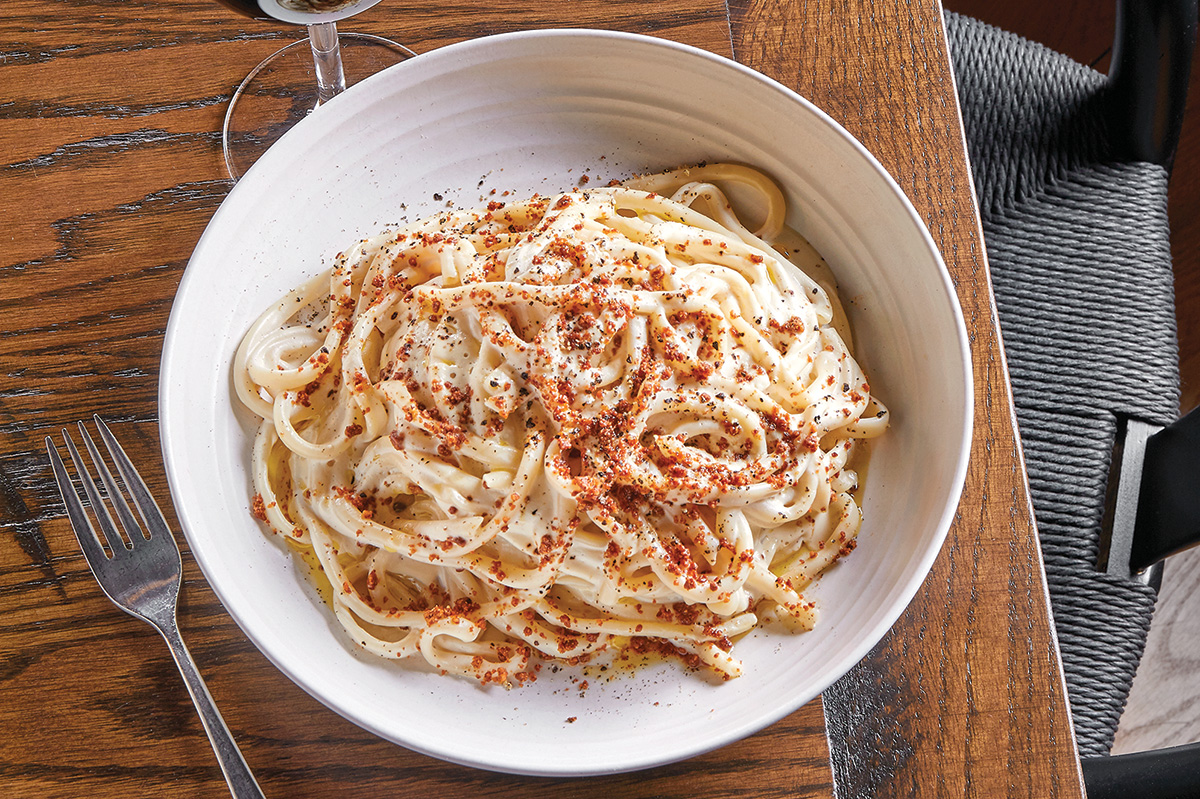 But Bar Verde and Double Zero have plans to overthrow the food that we crave. Both use a rainbow of agricultural ingredients, offering plates that glisten like Gatsby’s kaleidoscope collection of shirts. Nachos ($15) are coated with orange butternut queso, black beans and fuchsia radish slices; cauliflower tacos are dotted with smoky sunrise-hued pineapple and spicy green salsa; even plantain chips come with cups of earthy mole and herby crema. If it seems like a hard sell into a utopian world, think again. Plant City is more like an expertly staged house for sale, one that pushes you to reimagine the way you approach each day, each meal, each bite. It’s true that the first plate of nachos might seem like a letdown if you’re expecting stretchy ropes of molten cheese. But each subsequent plate tastes better, in part because the dishes that do us the most damage are suddenly guilt-free. 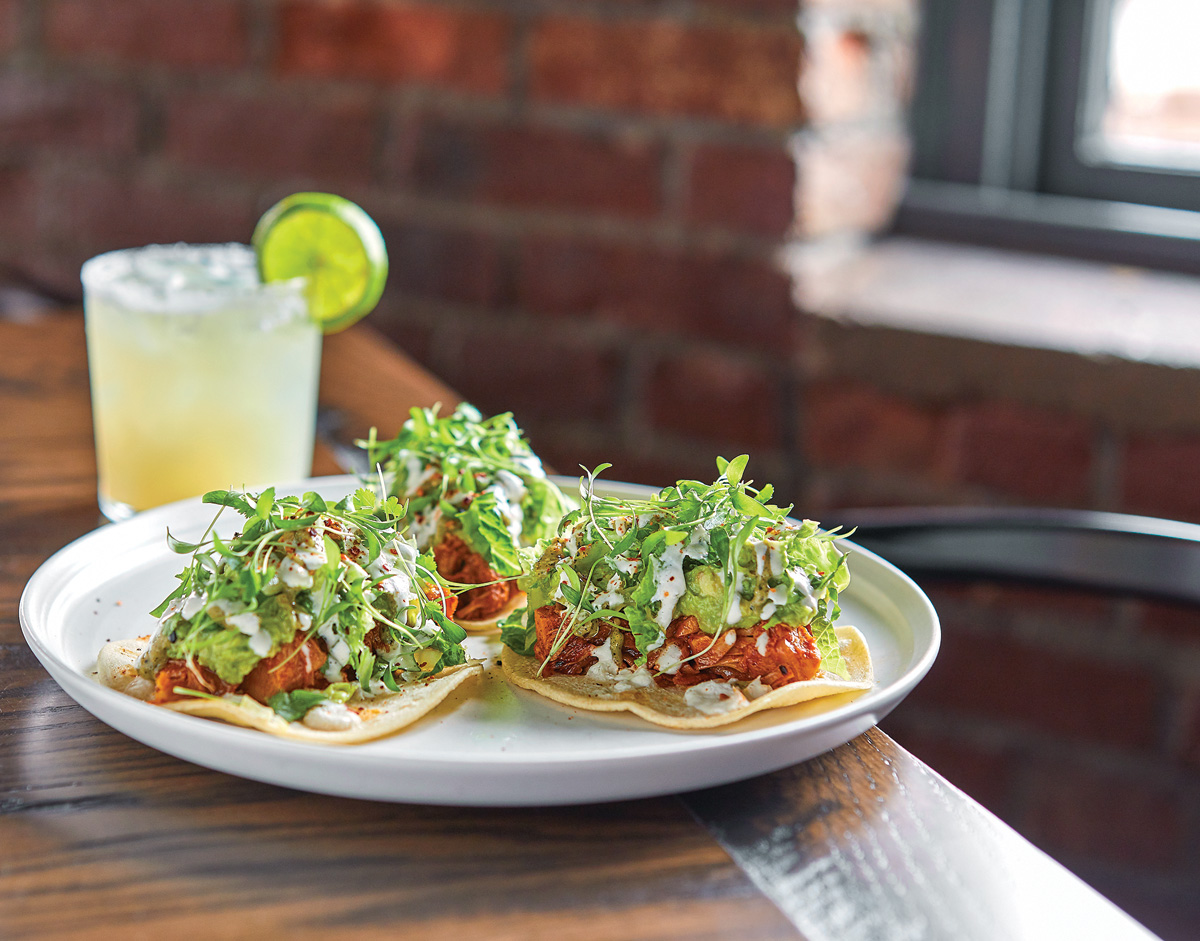 Yet it’s upstairs in the building’s most enviable corner that Kenney makes his mark. Double Zero is built around a bar but, surrounded by brick walls, dim lighting and a view of Providence’s $22 million pedestrian bridge, it’s even better at the perimeter. Servers are an integral part of the pitch, dedicated not only to the food but the cause as well. They may tell you what to avoid (“the potatoes. Boooring”); advise on how to order (“the gluten-free crust does better without tomato sauce”); or even offer life lessons (“if you’re not used to whole foods, you’ll find you get full faster”).

Everyone suggests the heirloom tomato and zucchini lasagna — it’s Plant City’s signature dish and it’s indisputably artful. Stacks of raw zucchini, pistachio pesto, variations of tomato, and macadamia ricotta look like a photographic love letter to Italy, all color-coded to match the national flag. It’s a deliciously bright dish but it is, for the most part, raw — and it’s $21. Health doesn’t come cheap. There are bright salads — eggplant, raisin and fennel as well as artichoke, cannellini beans and celery — that proudly represent the movement’s wealth for half the price. 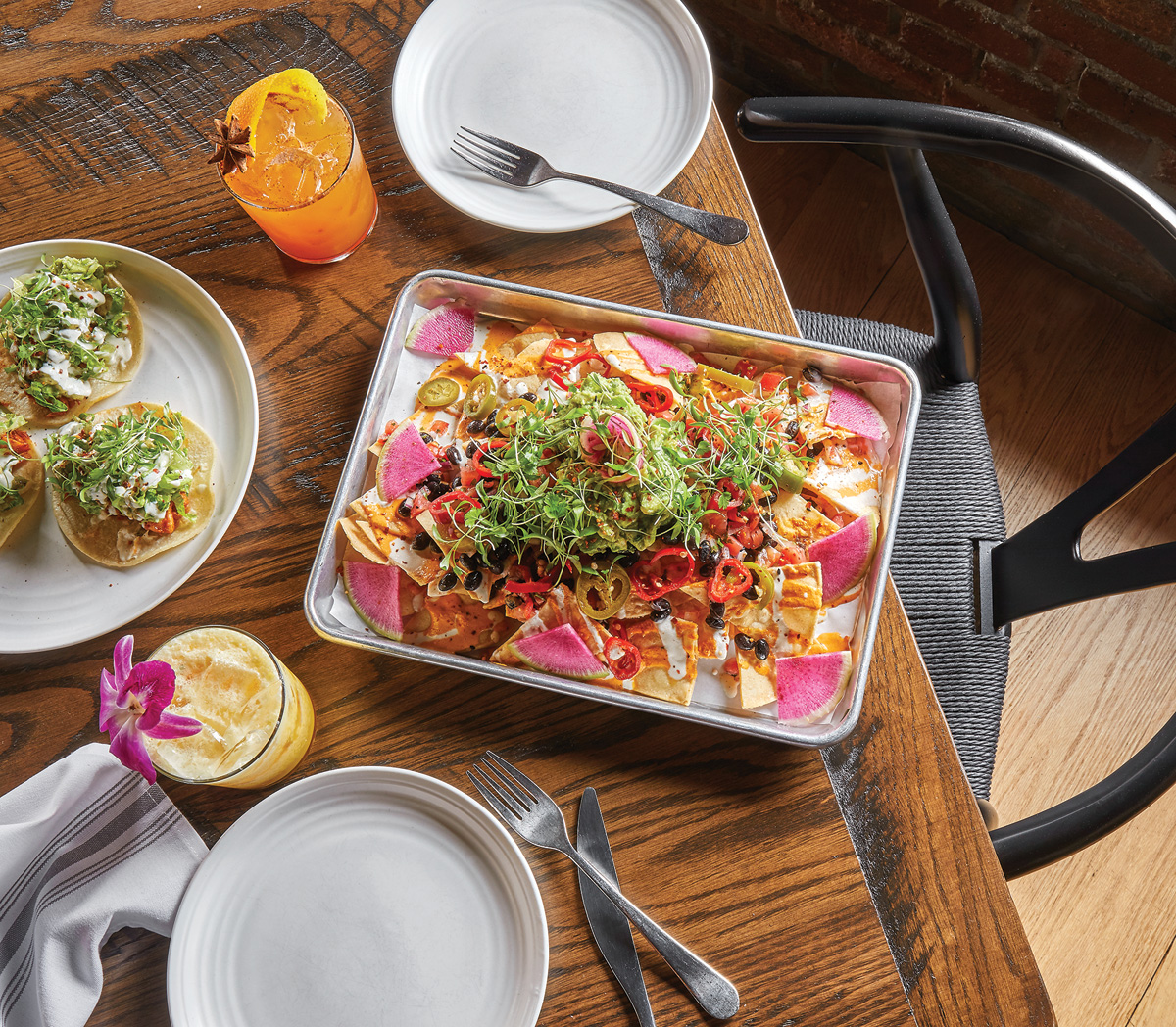 But the best dishes are cooked, including a trio of “meat” balls ($15) that are, without equivocation, a culinary revolution. They’re not trying to be meat as much as confidently thumbing their nose at old school, fat-laden interpretations.
Which, of course, leads to the pizza ($17–$21). It’s counter to everything common sense suggests but Double Zero makes the case for dairy-free pizza. Blistered, bubbled crusts are lightly covered in vegetables that bring both texture and surprise: fennel pollen, pepperoncini, preserved lemon, Tuscan kale all assert new life into an old favorite. For those not challenged by gluten, Kenney’s cacio e pepe, which is coated with pepper-infused cashew cream, is a clear roadmap for a world that’s entirely plant-based.

Desserts tend to be simple: Ice cream, either cashew or coconut based, and olive oil cake are well worth ordering. The last courses are somewhat unassuming after the main courses but that, too, is part of the ideology. The most enticing dishes have the most to offer, not only aesthetically but in basic nutrition and social responsibility. Plant City isn’t here for fads and flattery. It’s designed to reimagine American eating habits in a way that shifts everything we grow, nurture and consume. Will it work? In a town that’s literally built around higher education, one hopes Kenney has gained a genuine foothold in new American cuisine. 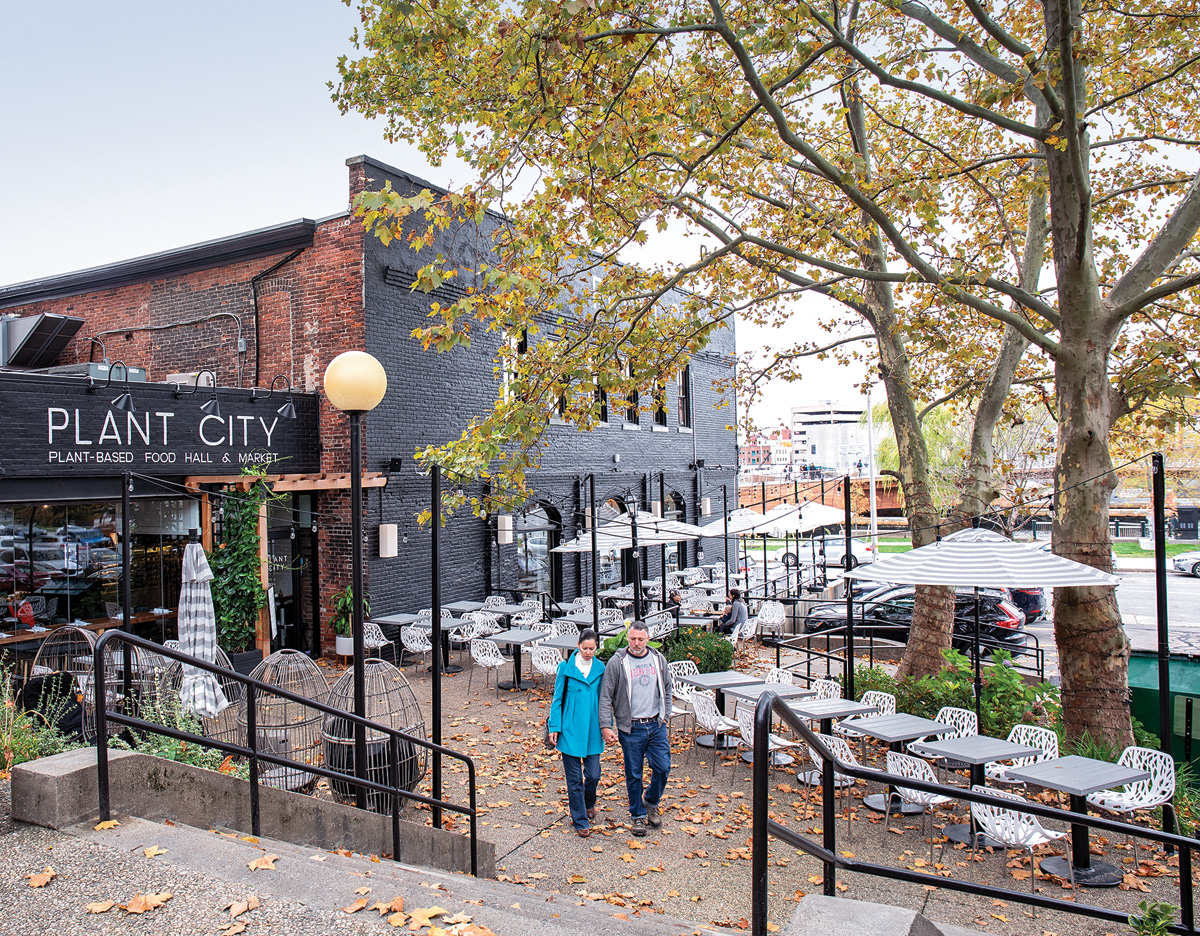 The exterior of Plant City. Photography by Angel Tucker.