How Rail Explorers Became the Easiest, Breeziest Daytrip in RI and Beyond

It all began with a "eureka" moment during a Korean drama.

Mary Joy Lu was catching up on her Korean dramas when she had a “Eureka!” moment in 2012. In the show, two lovebirds on a date climbed inside these contraptions on some vacant train tracks, pedaling together as the sun set before them. Racing upstairs, she shared the idea of their next venture with her husband, Alex Catchpoole, who was onboard immediately.

Originally from Australia, the co-owners of Rail Explorers had moved to New York in 2002. Living in Brooklyn at the time with their two boys, Charlie and James, the couple worked in visual effects and advertising for a company they own called tanQ on Fifth Avenue. The newness and excitement of this railbike enterprise drove the two entrepreneurs to visit South Korea a few months later and get the gears grinding for the project. The designers and manufacturers showed them (and their translators) the railbikes while talking design and functionality. They traveled back home with their newfound inspiration and got to work. 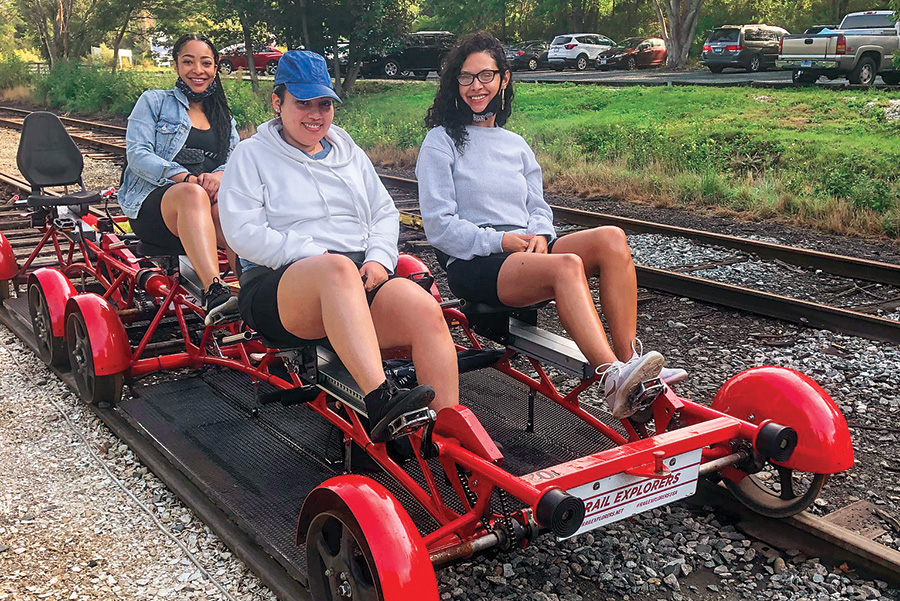 At first, they thought they’d have Rail Explorers up and running for at least six to eight weeks just for a proof of concept, some good photos and for memory’s sake, especially since they couldn’t get any loans to help them out financially. They were only able to afford six railbikes that they and their parents had funded. It took them two years to open their first location to the public, and in July 2015, Saranac Lake in the Adirondacks in New York was the hub of the famed attraction.

“We poured every ounce of energy into making it happen,” says Lu. “Ticket sales opened and we sold our first tandem railbike tour, which was $80. My husband and I looked at each other and went ‘Whoa, that was the hardest $80 we’ve ever earned in our life!’ ”

Despite the small amount of money made on opening day, the feeling of that first sale was one they’d never forget. Soon, the railbike tour gained traction, especially since Saranac Lake is just an hour from the Canadian border. Ticket sales took off and tours sold out.

Due to its high demand, Rail Explorers, which is governed by the Federal Rail Authority, went from being open five days a week to seven days the first month and they extended the season. Lu and Catchpoole shortly added more railbikes to their fleet in the Adirondacks, ending up with thirteen in total. Two years later, the New York governor’s office made the call to replace the railroad tracks with a multifunctional trail for bikers and hikers alike.

Wasting no time, the family moved to Middletown in 2017 to begin the work on their next railbike tour location, presented by the Newport and Narragansett Bay Railroad, otherwise known as the Old Colony Railroad. 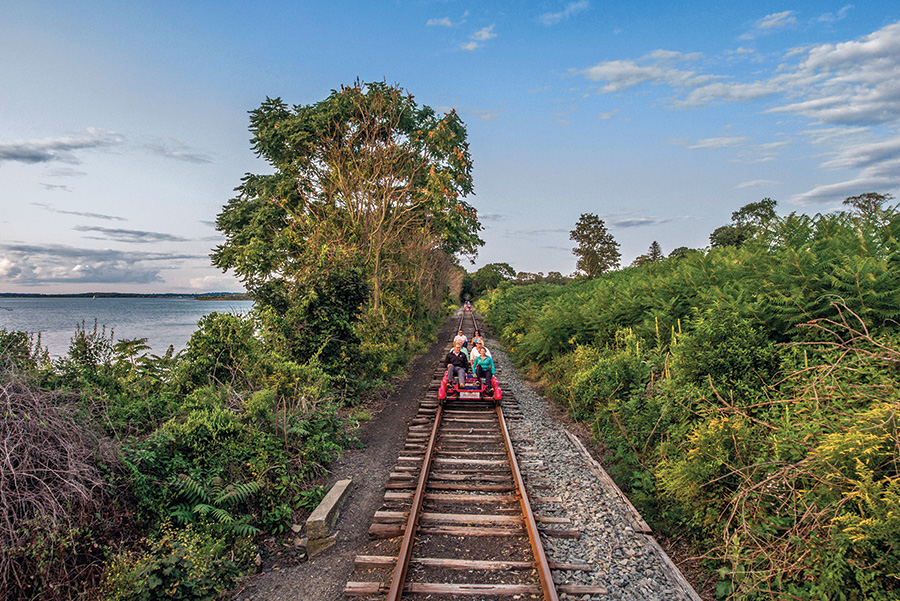 “We were approached by the owner of the Newport Dinner Train back in 2016,” Lu says. “We met with him and he said, ‘I’ve got this bit of track we don’t use, and I’d love you to use it.’ By chance, that was the end of 2016 when we heard that the Adirondack railroad was getting pulled out.”

The family relocated, along with their entire fleet of railbikes, and completely renovated the designated space. In the middle of winter, Catchpoole and a couple of contractors turned what looked like a mini forest full of bush and scrub into a quaint, spacious picnic area and parking lot for the main ticket office, Portsmouth Grove Station.

Guests can take a trip up the Northern Ramble, a six-mile journey rich with 400 years of history, along the tracks between Portsmouth and the Sakonnet River. Afterwards, they can ride back to the main station on the shuttle bus.

Visitors can also pedal down the Southern Circuit (three miles out, three miles back), which leads to a rest spot where they can sit back and relax on Adirondack chairs. This route is all about the destination, where the waterfront views are sensational and pair well with a thirty-minute picnic. This is also where specialty tours, such as Sunday Brunch and Fireside Tours, take place.
Pioneers of railbiking in the United States, the couple is grateful they’re able to offer this opportunity to a wide audience. But they say they’re always focused on what to work on and how they can improve their business.

“Whenever you are the first ever, I don’t think you ever realize that you are because you’re so consumed by the hard work it takes to just get up and running,” says Lu, adding that Rail Explorers tours are also offered in the Catskills and Cooperstown, New York, Las Vegas and Sante Fe.

The railbike tours are more than just a great expedition to get photos and closely observe nature. 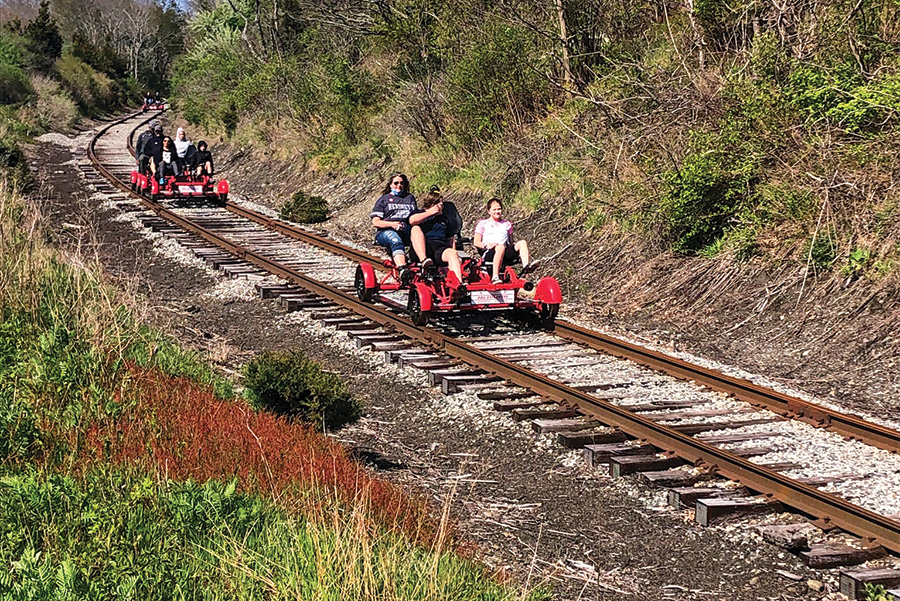 “We get a lot of people who are really nervous because to them, six miles is something they couldn’t do on their own two feet; they wouldn’t run it, walk it or bike it,” says Lu. “They have this sense of achievement that they’re not in the best of health and they did it. To say, ‘I did six miles’ is pretty cool.”

A young family of five had journeyed from New York to get the Ocean State experience and, even on a cloudy day, each member had a smile plastered on their face, especially the youngsters. A couple railbikes down from them was a girls’ trip of four women accompanied by drinks, celebrating life and the great views of the bay. There had also been a wedding proposal in the middle of the Southern Circuit trip, and tour guide Charlie Catchpoole, Lu and Catchpoole’s oldest son, captured the moment in a photo.

The feeling of the slight breeze hitting your face as you journey along the trails helps on a scorching summer day or adds to the wonderful sights of autumn leaves falling from trees. Wave to people doing chores around their yards, and glimpse nearby golf courses, beaches and bridges. Take in the clickety-clack matching the motion of your pedaling, the scent of nearby lawns getting mowed or the salty air from beaches closeby.

“All aboard,” passengers from every generation, furry friends and those with sensory disabilities. Hear and feel the railbike’s smooth glide along the steel tracks, as the wheels are only a couple inches from your pedaling feet. Upon buckling into my seat and stepping on the pedal lightly to go forward, I traveled further on the railbike than I had anticipated; I made a mental note that I didn’t need to channel my inner Eddy Merckx to get from point A to B.

“Not only is your view a 360-degree open window, but you’re also so low to the ground that you can see all the nail heads that hold the track together,” says Lu. “It just gives us so many opportunities to share, to be among the community in many different ways.”

Whichever route you choose to explore along Portsmouth, six miles of pedaling is worth the views of Narragansett Bay and neighboring islands and, if you’re lucky, eagles, deer and other animals in their natural habitat. Alongside family and friends snapping photos of every moment, learn the history of the places you pass and — like the rails beneath your feet — how they have evolved over time. 1 Alexander Rd., Portsmouth, railexplorers.net.