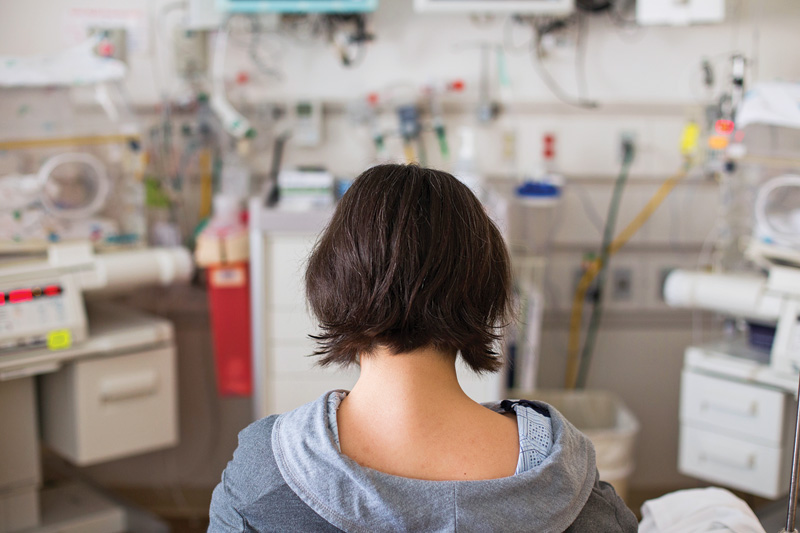 According to a study by Brigham and Women’s Hospital in Boston, 36 percent of pregnant and postpartum women have experienced significant levels of depression during the pandemic, up from 15 to 20 percent. But Sondra was diagnosed with postpartum psychosis, a rare mental illness that according to Postpartum Support International, affects only one or two new mothers in a thousand. Typically, symptoms appear a week or two postpartum and may include paranoia, suspiciousness and strange beliefs. Like all of the hospitals in the state, Butler was not allowing visitors. Unlike the NICU, there were no exceptions.

Sondra ended up doing two inpatient stays at Butler. After the initial session, about two weeks, there was no noticeable improvement. A week and a half after she was discharged that first time, she confessed to lying. She still had suicidal thoughts, she admitted. She had lied so she could come home; I brought her back to the hospital. I broke down in my mother’s arms when I walked in the door, having lost all hope that Sondra might come back to me or her boys.

Sondra’s next stay at Butler lasted four weeks and I did my best to maintain consistency for Lorenzo and Max, clinging desperately to their strict schedule. Every three hours: Diaper, bottle, nap, repeat. As long as I stuck to the schedule and tried not to think about anything besides who pooped last and how to adjust formula-to-water ratios to yield a bigger batch, I couldn’t get lost in the hopelessness of parenting without Sondra. My lucky break was that my initial eight-week furlough was extended another eight weeks, giving me all the time to focus on my sons’ care.

Not the only lucky break. Lorenzo and Max were mild mannered, relatively decent sleepers and, despite Sondra’s fears, healthy. I can’t imagine what would have happened if they’d been colicky, or had any serious problems. Trust me, I’ve tried. The hardest part was the volume of the work that comes with twins. Max’s finicky appetite aside, they were perfect: Fussy enough to give me the full new parent experience, while allowing me to feel like I was somehow keeping our lives from completely imploding.

Of course things would have imploded if my mom and I hadn’t had help. Sondra’s parents came some weekdays, and three close friends pitched in on a rotating schedule to get us through the boys’ late-night feedings.

Everyone wore masks. COVID tests were a regular part of our routines. 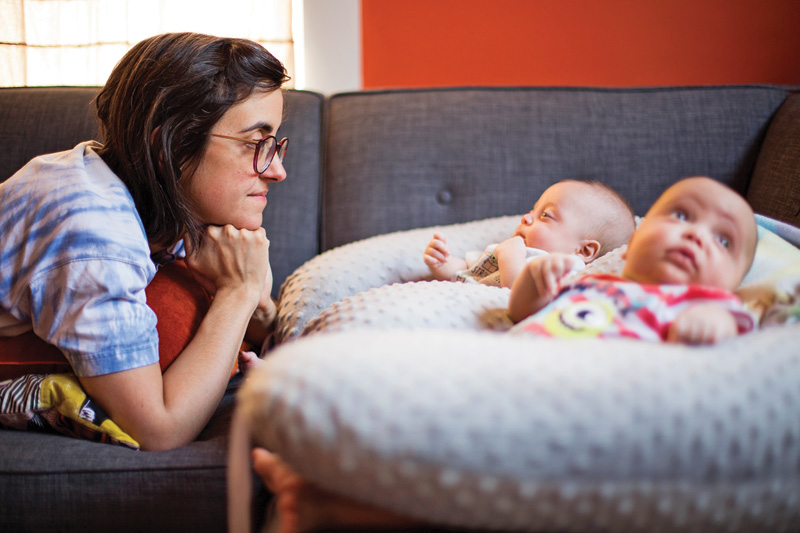 Once a week or so my mother and a friend would do the overnight feedings or tell me to step away during the day. On those nights I would gladly catch up on sleep, but time away from my responsibilities during the day was time to spiral out worrying about Sondra, so I’d try to lose myself in a book or a video game for an hour or so. What else could I do? With no theater to catch a matinee in, no coffee shop to sit in with a friend, there was nothing to escape to.

Besides, I had these two amazing babies and because COVID was keeping me away from work and any other reason to leave my home, I was able to soak up every milestone, no matter how small. I would lie on the floor next to their bouncy chair, and constantly fall deeper in love. Then I’d catch myself not worrying about Sondra for five whole minutes and I’d tailspin into guilt. If I wasn’t the saddest I had ever been I was the happiest I had ever been and, paradoxically, I was often both at the same time. Schrodinger’s Cat became my spirit animal.

Any communication with Sondra was brief and heartbreaking, and she almost never asked about the boys. When I asked how she was doing, she said that doctors couldn’t help her because she still believed there was nothing wrong with her. Progress was tough to gauge, because medication needed time to yield results. One day, Sondra mentioned her doctor had discussed more aggressive therapies. “They want to give me shock treatment,” she told me. “I won’t do it.”

A week later, her doctor called to tell me electroconvulsive therapy (ECT) was next since meds weren’t working. No one was going to force her to do anything, but he stressed that ECT was safe and effective in severe cases of psychosis. In a nutshell: By exposing the brain to electric stimulation and inducing a brief, controlled seizure, the brain’s chemistry is changed in a way that reverses a psychotic patient’s symptoms.

Sondra agreed, and over the next several weeks received ECT treatments every other morning. I was warned that some memory loss would be the most obvious side effect, and a few hours after her first treatment, Sondra called me in a disoriented panic. When she’d woken up she didn’t know where she was or remember having our sons.

One week and several treatments later, Sondra called after coming out of the anesthesia.

“So apparently I have two babies,” she said, and for the first time in months I heard actual joy in her voice. “Tell me all about them!”

Her short-term memory was completely shot, and she had no recollection of those first few postpartum months. The visceral memories of wanting to leave her family or to harm herself were gone, thankfully, but so were all of the tactile details of her sons’ earliest days. The phone calls after treatments were always a surreal interview, with Sondra asking things like, “Why am I here?” and “So we have two babies, right?” and “Holy shit, that all really happened?”

She was confused, but the Sondra we had lost was coming back. After everything that had happened, hope was an unfamiliar but welcome feeling.

She came home for good at the end of July, just in time for Lorenzo and Max to show off their first real smiles. After nine weeks, my mother returned to New Hampshire and by August I was back to working from home. For Sondra, the biggest challenges were finding herself smack in the middle of a pandemic and quarantining in a house with two four-month-olds. Knowing that sleep was vital to Sondra’s recovery, I had trained the boys down to six bottles from eight, and had them sleeping longer stretches through the night. For me, the hardest part was learning to trust that she was really home to stay. The emotional whiplash was brutal. 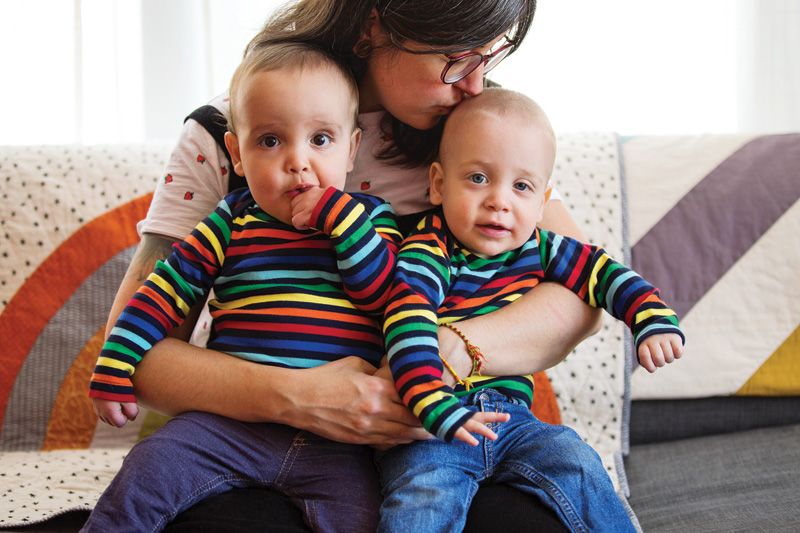 By November, between the spiking COVID numbers and the sleepless nights that came with two teething babies, Sondra’s psychosis no longer demanded my anxiety’s full attention. We finally started to feel like an ordinary family trying to survive the same extraordinary circumstances as everyone else.

Today, at fifteen months, Lorenzo and Max are mobile, feisty and blissfully unaware of the trauma of the last year. They are finally down to four bottles a day from their initial eight, and have been consistently sleeping through the night. Family and friends celebrated their first birthday through a computer screen but the boys didn’t know the difference. At this rate, they’ll just assume everyone on TV is family, and will eventually wonder why Uncle the Mandalorian and Grandma Mary Berry never come over.

Sondra is healthy and stable thanks to medication and increasingly less frequent ECT sessions. She still has flashes of depression, and she has almost no memory of her first six months of motherhood, but dealing with it is just a part of our routine now. Even though we haven’t had a real date night yet, the nicer weather has certainly done wonders for her mood. So has getting vaccinated.

I ugly cried many times over the last year, but I never thought making an appointment for a shot would be one of them. Between the vaccine and Sondra being well, our new normal finally feels as if it’s in reach. Not that our kids will know any different. We had our first play date in May, and while the boys played carefree with their new friend it was impossible not to feel the weight of the year on that moment.

For information about local postpartum health resources, visit postpartum.net/locations/rhode-island. If you or someone you know is thinking about or planning suicide, call the National Suicide Prevention Lifeline at 800-273-8255. Crisis Text Line: Text HOME to 741741 anytime about any type of crisis.

How Rail Explorers Became the Easiest, Breeziest Daytrip in RI and Beyond