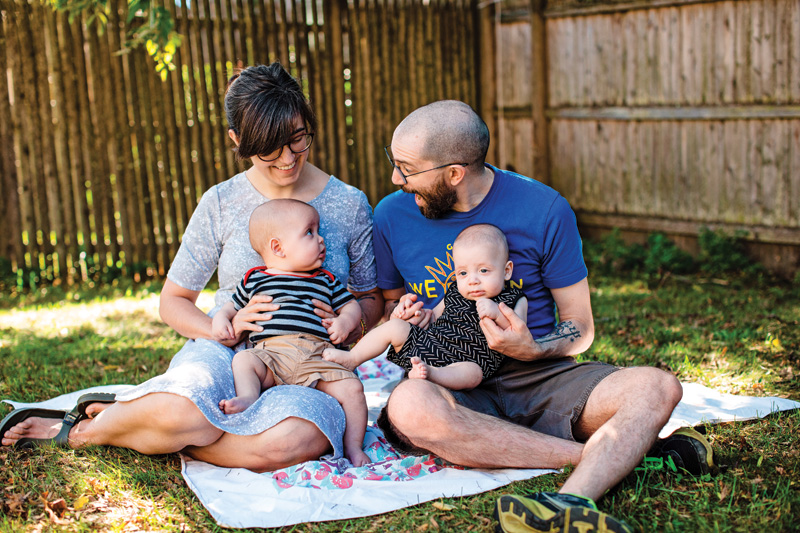 September 5, 2020: Home for six weeks, Sondra is stable and improving. A friend, Kendall Pavan St. Laurent, takes the first photos of Tony, Sondra, Lorenzo (left) and Max as a family.

On April 1, 2020, I was placed on an eight-week furlough due to the COVID-19 pandemic. My wife, Sondra, was thirty-four weeks pregnant with twin boys. No one hopes for “Catastrophic Health Crisis” and “Unexpected Loss of Income” on their parents-to-be bingo card, but there it was. As I scrambled to get our mortgage deferred, I reminded myself that at least we’d keep our health insurance. It was the only thing that kept me from running through the wall screaming, leaving a cartoon me-shaped hole behind.

Two days later, Sondra got the call to come in for a C-section. We’d tried for years to get pregnant and eventually went the IVF route. Up ’til now, Sondra’s pregnancy had gone smoothly and she was very excited. But in her third trimester, the doctor began monitoring her weekly for preeclampsia, a potentially dangerous condition that sent her blood pressure soaring and caused extreme swelling in her legs and feet. When her doctor called two days after my furlough, she wasn’t happy with the latest test results. It was time to meet the boys.

At the entrance to Women and Infants, hospital staff took our temperatures, gave us masks and asked the soon-familiar questions about our recent whereabouts and any COVID-related symptoms. After a short wait, Sondra left for C-section prep in good spirits. When I finally joined her in the operating room, the only thing between us and the rest of our lives was a curtain drawn across her belly. We squeezed each other’s hands, and in that moment, I wasn’t thinking about COVID-19. I was thinking about the two little strangers we were about to meet.

Once the doctors went in, though, the mood shifted. For Sondra, the procedure was traumatic from the jump. Though she wasn’t in pain necessarily, she kept saying that she could feel her insides being tugged and shifted, that she was uncomfortable and scared. Despite that, Lorenzo, five pounds and three ounces, came screaming into the world at 5:59 p.m. in a very quick delivery. He was followed one minute later by Max, three pounds and thirteen ounces. Sondra endured long enough to hear her sons’ healthy voices for the first time, then they knocked her out. 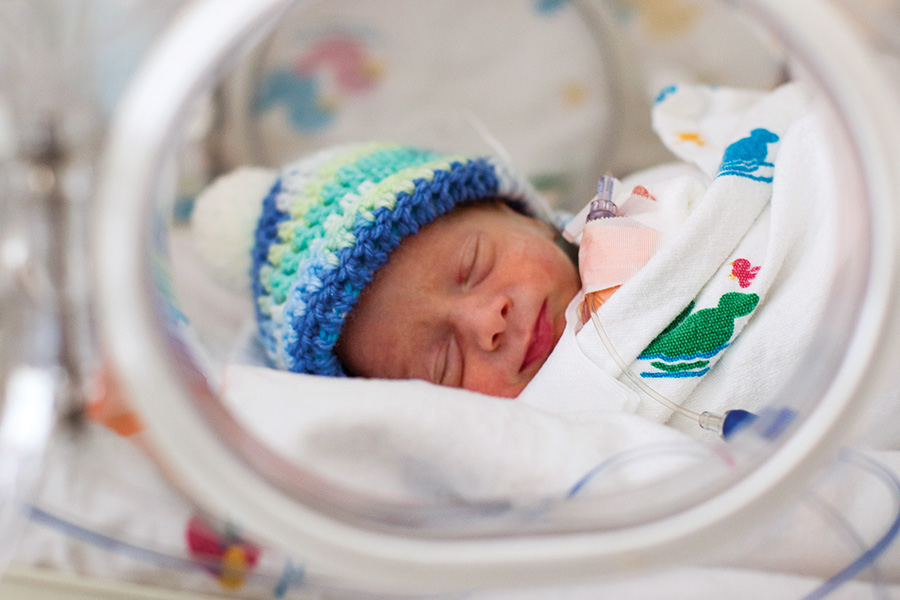 The rest of the night was a blur until just before midnight, when she finally woke up and a nurse wheeled her into the Neonatal Intensive Care Unit (NICU) to meet her very tiny sons for the first time. Because we were afraid of what could happen if we dared to pull down our masks, we wouldn’t kiss our babies until we brought them home two weeks later.

On March 9, 2020, then-Governor Gina Raimondo declared a state of emergency in Rhode Island. In the early days of the lockdown, expectant parents were not allowed to be in the ultrasound room with their partners for that first look at their child, and every mother has had to navigate the choppy waters of postpartum health via teletherapy. Some 7,989 babies were born at Women and Infants in the year following the start of the shutdown, and our twins were two of them. We discovered the hospital to be quieter than a lifetime of expectations that TV and movies had prepared us for. Because of COVID there were no well-wishers allowed to meet our new babies or anyone else’s. Women were permitted a single support person, and everyone was asked to stay in their rooms.

Since our boys were in the NICU, I was permitted — expected, actually — to go back and forth between Sondra’s room on the opposite side of the hospital. The NICU was a cluster of rooms, each dedicated to a single family and the medical needs of their child. Each family had its own pod with a couch and, at first, parents could come and go twenty-four hours a day. Lorenzo and Max didn’t need much; they spent their days and nights in their own isolettes, connected to noninvasive monitors until they gained weight and their bodies learned to regulate temperature. Walking by other rooms I’d catch glimpses of what other families were experiencing: teeny tiny babies hooked up to breathing and feeding machines, or under special lights to treat jaundice. I never took for granted how fortunate we were to have small but healthy babies.

Those first few days were mostly sleepless. A nurse would come every few hours to check Sondra’s vitals and dole out medication while I set up the breast pump and delivered milk to the NICU. Some of my favorite moments were those late night milk deliveries. Sometimes I’d get there just in time to give one of the boys a bottle, other times as the nurse was finishing their feeding. 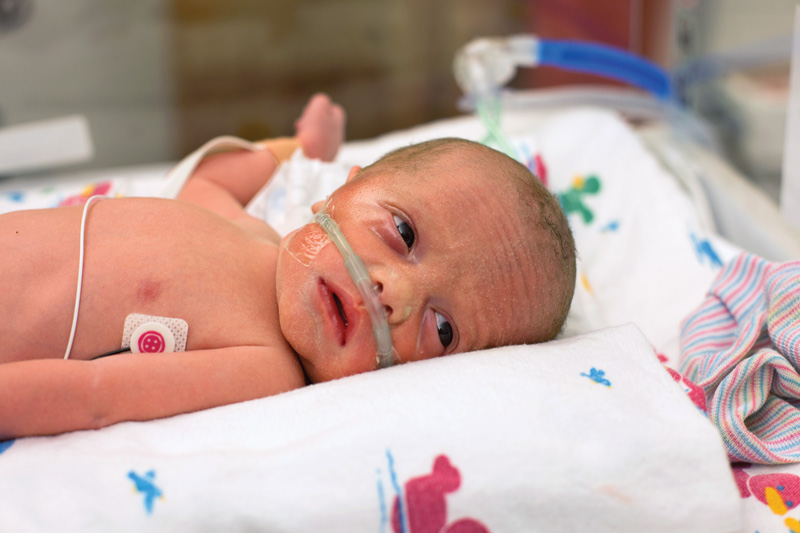 “You wanna hold him, Dad?” she’d ask before she put whoever she was holding back down. I loved being called Dad. I’d sit there and marvel at their unbelievable smallness. Lorenzo looked just like Sondra, and Max like me. We each got one!

Sondra was discharged four days after delivery, but recovery was slow due to the swelling in her legs. She could barely get in and out of bed without help and wasn’t able to make the first few trips to the NICU after we were home (NICU parents were exempt from the no visitor rule). Forty-eight hours after she was discharged, it got so bad that I took her back to the hospital. Once she was there she began to act paranoid about what her doctors were telling her, and she’d get stuck in weird conversational loops and sometimes speak nonsense. Fearing that something might be wrong, I found it harder to leave her bedside.

Meanwhile, the NICU staff had noticed the gaps between my visits and how little they had seen of Sondra. They weren’t judgmental, and they knew her situation, but their job is to make sure that parents are involved and learning how to care for such fragile babies. With Sondra temporarily unable to visit the NICU, the hospital cleared my mother as an additional support person. Once Sondra was physically able to move about and get discharged again — the strange behavior seemed to vanish with the fifty pounds of extra fluid she had been carrying in her legs, and I chalked it all up to exhaustion — Sondra, my mother and I focused on familiarizing ourselves with the task of keeping two preemies clean and fed. Every time we entered the building, we stopped for temperature checks, went straight to the NICU and scrubbed from fingertips to elbows with the single-serve heavy duty doctor soap/abrasive sponge packet that we got at the receptionist’s desk.

Lorenzo was discharged first, followed by Max the next day. Max was so small that the top of his head was barely visible in my rearview mirror. At that point even the NICU policies were changing in response to COVID. If Max had stayed any longer, we’d have had to plan each day around a single trip to the hospital. My mom stayed a few more days until we were settled, then returned to New Hampshire.

There was no example to follow; baby books don’t have pandemic chapters. Parents bringing newborns home had to improvise, keep their village at a distance of at least six feet and introduce their children to family through video screens. Still, those first couple of weeks home went as smoothly as they could have.

The NICU nurses had the boys on a strict schedule of one bottle every three hours ’round the clock, which we stuck to. Friends would make grocery runs for us and we would introduce them to the boys through the front window. Baby wipes were hard to find for awhile thanks to people hoarding supplies, but we made do with washcloths. Breastfeeding didn’t pan out, and by mid-April people had stopped filling their bunkers with baby formula.

When the boys were five weeks old, Sondra’s mood shifted again, and she started disconnecting from our new life as a family. She was in frequent contact with her therapist and began attending an outpatient program for postpartum mothers at Women and Infants, first through Zoom and then in person. Despite that, she began to distrust her caregivers again, and now it extended to our sons. She believed in her bones that there was something wrong with them. Nothing that I or our pediatrician told her, or even the two thriving babies in front of her, could change her mind.

As May wore on, she became less and less responsive to the boys. If I was in another room, I couldn’t trust that she would check on them. I also couldn’t trust her to be truthful about the care she was receiving. Through the couple’s sessions that were part of her outpatient program, our therapist and I began to realize that Sondra was withholding information from everyone. She told us what we wanted to hear, but when we confronted her, she said she wasn’t supposed to be a mother, that she felt no love for her sons. As long as we had been together Sondra had only ever wanted us to start a family. Something was profoundly wrong.

One Sunday morning in late May while each of us was feeding the babies a bottle, Sondra was especially quiet. I pressed her to tell me what was going on. There was something she wasn’t telling anyone because it was too big, too scary, she admitted. I told her that we were beyond that now, and that unless she opened all the way up no one could help her. She took a breath. I’m thinking about suicide, she said. I knew instantly that things would go really bad if we didn’t get help right away.

We put Lorenzo and Max down and Sondra called her therapist. I phoned my mother and asked how quickly she could be back in Rhode Island. As soon as she arrived, I brought Sondra to Butler Hospital for inpatient treatment.