How Much is Too Much for Parents to Pay for a Field Trip?

As school fees for field trips and other exotic activities climb, who should pay?

In 1868, the General Assembly thought it had nipped in the bud the regrettable practice of municipalities sending tuition bills to public school students, by stripping local officials of their authority to impose fees. Thirty-five years later, the legislature required school districts to supply text books “with the object of making the schools absolutely free.”

But whenever and wherever the pull of need and nice-to-have meets the resistance of taxpayers, school fees flood back in.

In its 1917 annual report, the Rhode Island Board of Education minced no words in excoriating local districts who charged fees for evening classes. Not only was it illegal, the board said, it was immoral – “contrary to the spirit of the entire school system” and a violation of “a fundamental principle of Rhode Island school administration” because it created “an obstacle against free attendance” and discriminated “against the boy and girl who have not a dollar and the boy and girl who cannot afford to risk a dollar. It amounts to a retroaction to conditions prevailing forty years ago and introduces anew one of the greatest evils of the public school system.” 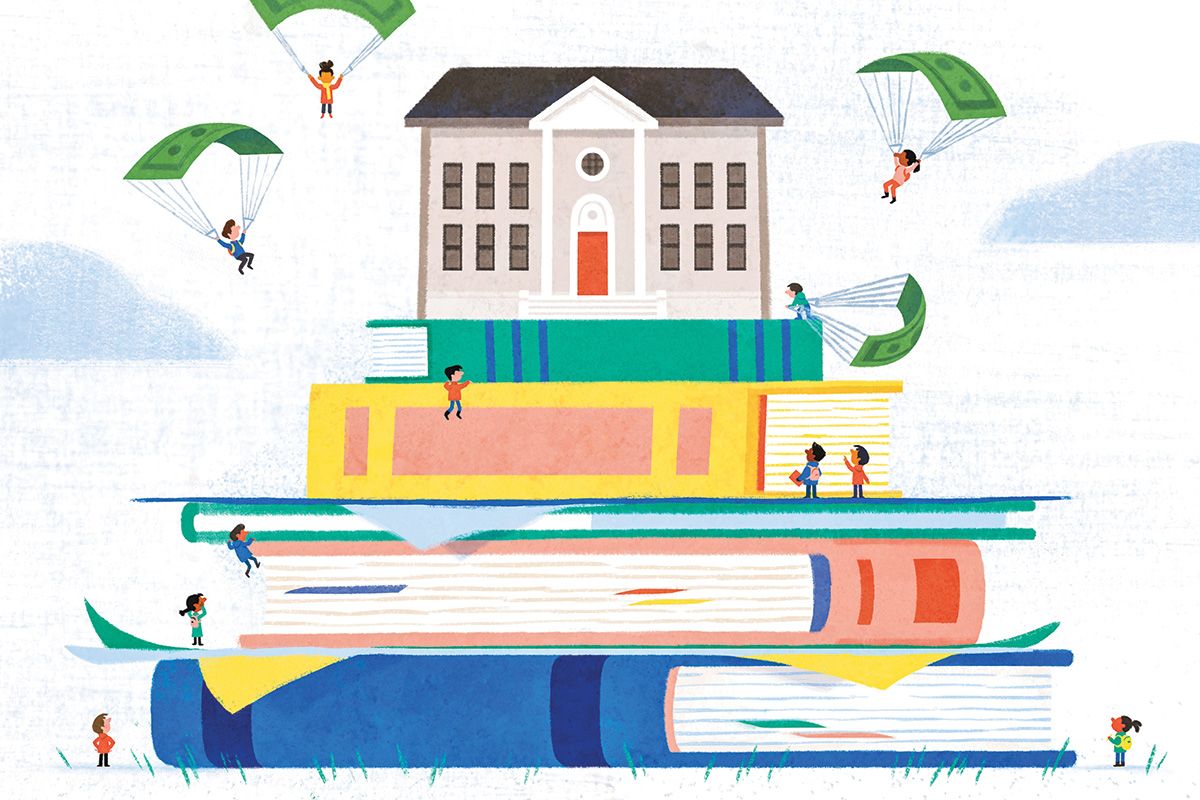 Today, “one of the greatest evils” is not thought of as evil at all, but merely the price parents have to pay to leverage a public-school experience into a resume-polishing, premium one featuring a full catalogue of Advanced Placement courses, gym classes at the local rock-climbing facility, and extensive travel to academic competitions. And for financially stressed districts, fees have come to act as a valve that releases a little of the pressure on their budgets, off-loading their obligations to provide summer school or ensure student laptops onto individual families who may have struggles of their own.

This spring, the school fees debate resumed after then-Education Commissioner Ken Wagner issued an advisory opinion to the East Greenwich School Committee about the practice of charging for school-sponsored field trips. School officials had been at a two-year impasse over revisions to the field trip policy when it asked the commissioner in September for guidance. Among the district’s more recent traditions was the eighth-grade trip to Washington D.C. In some districts, a tour of the nation’s capital has become as reliable a sign of spring as a robin. Embedded into the social studies curriculum, the trip has a hefty price tag, ranging in recent years from $500 for students at South Kingstown’s Curtis Corner Middle School, to $690 at Foster’s Ponaganset Middle School to $1,400 at East Greenwich’s Archie Cole Middle School.

In April, Wagner laid down the long-established law: public schools must fund activities that are part of the educational program. Schools can fundraise, accept donations from parents or seek grants to pay for extras, but they could not impose contributions or fundraising targets on individual students. Such activities must be open to all. Any trip requiring individual fees must be done without the use of any district resources — including staff time.

The East Greenwich School Committee had already denied approval to the Washington, D.C., trip — which less than half the class took; parents re-organized it as an out-of-school activity, and the students went. But, statewide, Wagner’s reply set hands a-wringing. Middle class kids would be deprived of enrichment opportunities, some complained; districts could end up footing the bill for school-sponsored ski club trips for poor kids, others warned.

“There has been a great amount of misunderstanding and a bit of fearmongering,” says Steven Brown, of the American Civil Liberties Union of Rhode Island, which joined Rhode Island Legal Services in encouraging Wagner last spring to educate districts about the law.

This June, the Rhode Island School Superintendents Association discussed how to ensure compliance. Many districts had never taken a complete inventory of their fees, let alone searched their souls.

“The chief concern was that there may be an unintended consequence, creating more inequity,” says RISSA Thomas P. DiPaola. “If fundraising is needed to support an activity, that may be easier to accomplish in a more affluent district. If it applied to a less affluent district, some activities might be cancelled or postponed.”

The constant, upward creep of public-school fees is an issue nationwide, as parents pitch in to buy classroom supplies, and shell out for band uniforms. In Massachusetts, for example, Newton Public Schools lists fees such as elementary school music program $150 a year; bus transportation $350 per child; high school sports $325 per sport, family cap of $975; $150 for high school drama, per production per student; $475 a year maximum.

In 2010, the California ACLU brought a class action lawsuit on behalf of the state’s public-school children, after finding thirty-two districts that charged students for everything from science lab fees to textbooks. Doe v. the State of California alleged that those fees violated the state’s 1879 constitutional promise of “free education.” In 2012, the state settled the lawsuit with the passage of a law establishing a uniform complaint procedure to report illegal fees to the state department of education.

“Every student deserves the opportunity to a high-quality education, and we must do all we can to make that value a reality,” she said in a written statement. “Every decision should take equity into serious consideration, including how schools fund field trips and who gets to attend them.”

Some districts offer financial assistance to families for some fees. The Portsmouth High School Model UN club, which spends about $20,000 annually on travel to out-of-state conferences, tries to assist those who cannot afford to participate.

“I understand where the interpretation is coming from. I completely want everyone to have equal access to Model UN,” says senior Lauren Griffiths, a dedicated member. “Our club has always fundraised to make sure that every student has the ability to go — we also make sure nobody knows who that money is going to — it’s all very private.”

But financial hardship is not always accommodated. In the spring of 2012, the Cumberland school district denied Susan Giannini’s request to waive the $700 summer school fee. She was under-employed at the time, and scraping up $700 would be a stretch. She remembers how busy the bank was that day, cutting cashier’s checks for all the parents in the same boat. It felt wrong. Her oldest son had needed extra help since he was diagnosed with Attention Deficit Hyperactivity Disorder in pre-school. But that June, the school informed the Gianninis that their son would have to attend summer school to advance to the tenth grade.

“He had an [Individual Education Plan], but his first year of high school, he had straight Fs. His reading and math were on the fourth-grade level,” she says. “They had failed my son and they didn’t want to take responsibility.”

Giannini, represented by RILS lawyer Veronika Kot, appealed the district’s decision for four years, losing at the district level, before then-Commissioner Deborah Gist and the state Board of Education. The three argued that Cumberland could charge because summer school was not part of the basic educational program, that the legislature never intended to extend the free education concept to summer school, because it did not exist in 1868, and that there was nothing compelling the student to go to summer school, he could simply opt to repeat the ninth grade. In 2016, a state Superior Court called their arguments absurd. Giannini got her $700 back.

Rachel Santos, now fourteen, still remembers the day she spent in another teacher’s classroom, while the rest of her first-grade class went to the zoo. She was excited to go — it would be her first time. But her mom, a single parent, worked in a supermarket for less than $10 an hour and couldn’t afford the $15 fee.

“I was extremely sad,” she recalls. I was about to cry. Everybody was talking about how great this trip was, but I wasn’t there.”

Kot says the notion that waivers or ad hoc financial assistance for fee-based activities provides equal access is a “fiction,” and puts lower income families in the position of asking for charity.

“There’s no process. And people get embarrassed. How many kids never said they wanted to go because they were too embarrassed to ask?” she says. “These are the children who need enrichment the most, and in the system that starts charging fees, they are the children least likely to get it.”

Many districts say that they get it — now.

“It can be hard to change ingrained habits and systems that we’ve inherited,” concedes South Kingstown Superintendent Robert Hicks. “It is important that people raise these issues. Recognizing inequities is a learning process.”

East Greenwich School Committee Member Matthew Plain, a passionate advocate for equity, says it’s important to start with “the essential philosophy of the system and have procedures flow from that,” he says. “We have to remove barriers for kids. It’s never easy. There were lots of uncomfortable discussions and some hard feelings, but it’s worth it, if you preserve the integrity of the system and end discriminatory practices.”