Our local front-line health care workers have been hailed as heroes during the pandemic. But what happens when they're the ones in need of care? 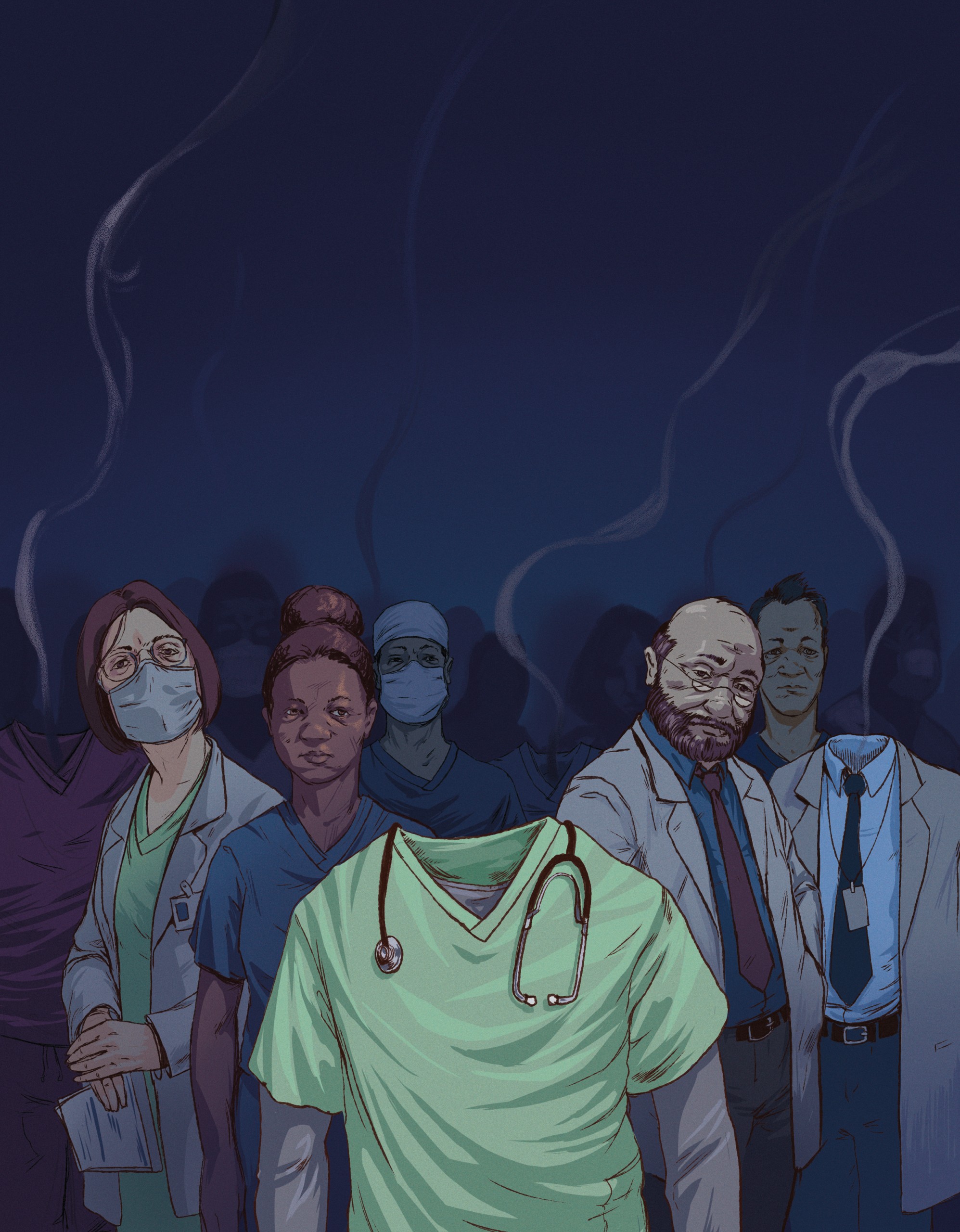 Helene Macedo didn’t think about it much when her headache started around noon.

It was Oct. 26, 2020, and the nurse and case manager at Rhode Island Hospital was in the midst of a very busy Monday. Elective surgeries had resumed at hospitals around the state, but COVID-19 was still in full swing, and case numbers were beginning to creep toward a winter surge. Nursing homes were still seeing waves of infection, and Macedo was having trouble finding somewhere to discharge patients when they left hospital care. A nurse in the intensive care unit, operating room and recovery room for three decades before shifting to case management in 2018, she knew the importance of getting healthy patients out of the hospital quickly to free up beds for newer, sicker ones coming in.

“There was a lot of pressure every day. You would come in, the rules would be changing everywhere in the state with COVID, and it was just a very stressful time,” she says.

Fully masked and too busy to think about drinking water, she assumed she was dehydrated. It wasn’t until she sat down for lunch around 3 p.m. that she knew something was wrong.

“All of a sudden I started to eat and I was like, ‘Oh my God, I can’t taste my food.’ Panic set in, because especially then, that was the big thing. You lose your taste and smell,” she says.

She immediately left for home to begin what she expected would be a two-week period of isolation and rest. A positive test the next day confirmed she had COVID-19. For the next few weeks, crippling headaches and fatigue like she’d never before experienced kept her mostly confined to her bed. After about a month, the headaches began to subside, only to be
replaced by cardiac symptoms like chest pain and an elevated heart rate. A former marathon and triathlon runner who worked out six days a week, Macedo now found herself winded from walking to the end of her driveway. Tests revealed she had myocarditis, a swelling of the heart muscle seen in some patients with COVID-19, as well as pericardial effusion, a buildup of fluid around the heart.

As the weeks wore on, she began noticing other things. Simple tasks that were once routine now left her stumped and forgetful. Conversations were difficult to remember, and driving to her husband’s workplace a short distance away from her Cranston home now proved impossible without GPS. Cooking, a favorite activity, became a minefield as she struggled to focus on simple recipes with no sense of taste to guide her.

“To go from that level of functioning to literally barely making it through a day at home was just — that was eye-opening,” she says. “It starts to play with your head a little bit.”

Difficulty concentrating, chest pain and shortness of breath are all symptoms of what the Centers for Disease Control and Prevention calls post-COVID conditions, better known as long COVID. In January of 2021, Macedo began visiting Lifespan’s Long Covid Clinic for patients experiencing symptoms weeks or months beyond their initial infection. She took a leave of absence from work while following a regimen of physical therapy and medication to get back to her functioning self. Nine months after her initial positive test, she finally felt ready to return. She resumed her old job at Rhode Island Hospital in July 2021, starting off in four-hour shifts. Anything more, and the headaches would return, bringing with them the fatigue that forced her back to bed.

“Every day that would go by that I was not able to go back to work I was getting more nervous and sad thinking, ‘Oh my God, what if I don’t return to work?’ ” she says. 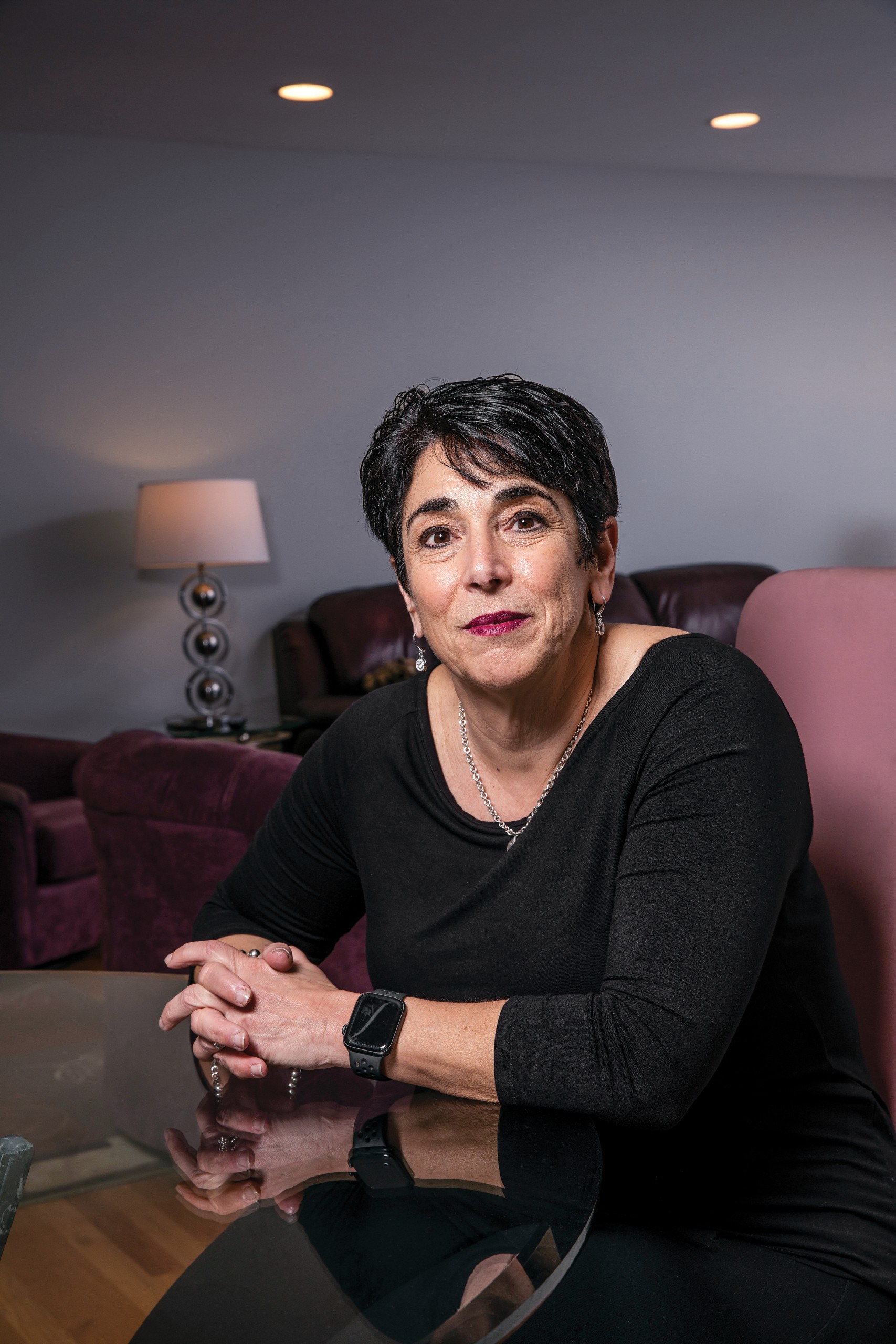 Macedo’s Story — of anxiety, illness and a life disrupted by COVID-19 — is familiar to those living through the front lines of the pandemic. Though most health care workers evaded the debilitating effects of long COVID, nearly all have faced the strain of working under the constant threat of a potentially life-altering illness, made real by the suffering of patients every day. For most, the toll has been not physical but mental as pandemic life brought years of stress and burnout beyond their breaking point, forcing front-line medical workers across the industry to adjust their lives as a result.

“I feel like in medicine, it’s always a balance of wins and losses. You have this bucket that’s about half-full all the time because if it was too full, it would bubble over,” says Dr. Bradley Collins, a hospitalist at Miriam Hospital. “With the pandemic, it was just constantly being at patients’ bedsides, holding iPads for them when they were dying so they could say their farewells to their family members, understanding that people couldn’t visit because we had to try to keep the public safe. We didn’t have those wins to sort of empty the bucket a little bit. I think it got to a point for some of us where that got so full, even little things would cause it to spill over.”

Jacqueline Insana, a psychiatric nurse working in Rhode Island, describes the large number of patients in need of behavioral and mental health services as a “second pandemic.” As levels of anxiety and depression have increased nationwide, so too have the needs of providers who care for patients. Sometimes, she says, she’ll receive texts or phone calls from friends working in health care seeking advice regarding their own mental health — where to find a therapist, or whether they should seek out professional help.

“To go from that level of functioning to literally barely making it through a day at home was just — that was eye-opening. It starts to play with your head a little bit.” — HELENE MACEDO 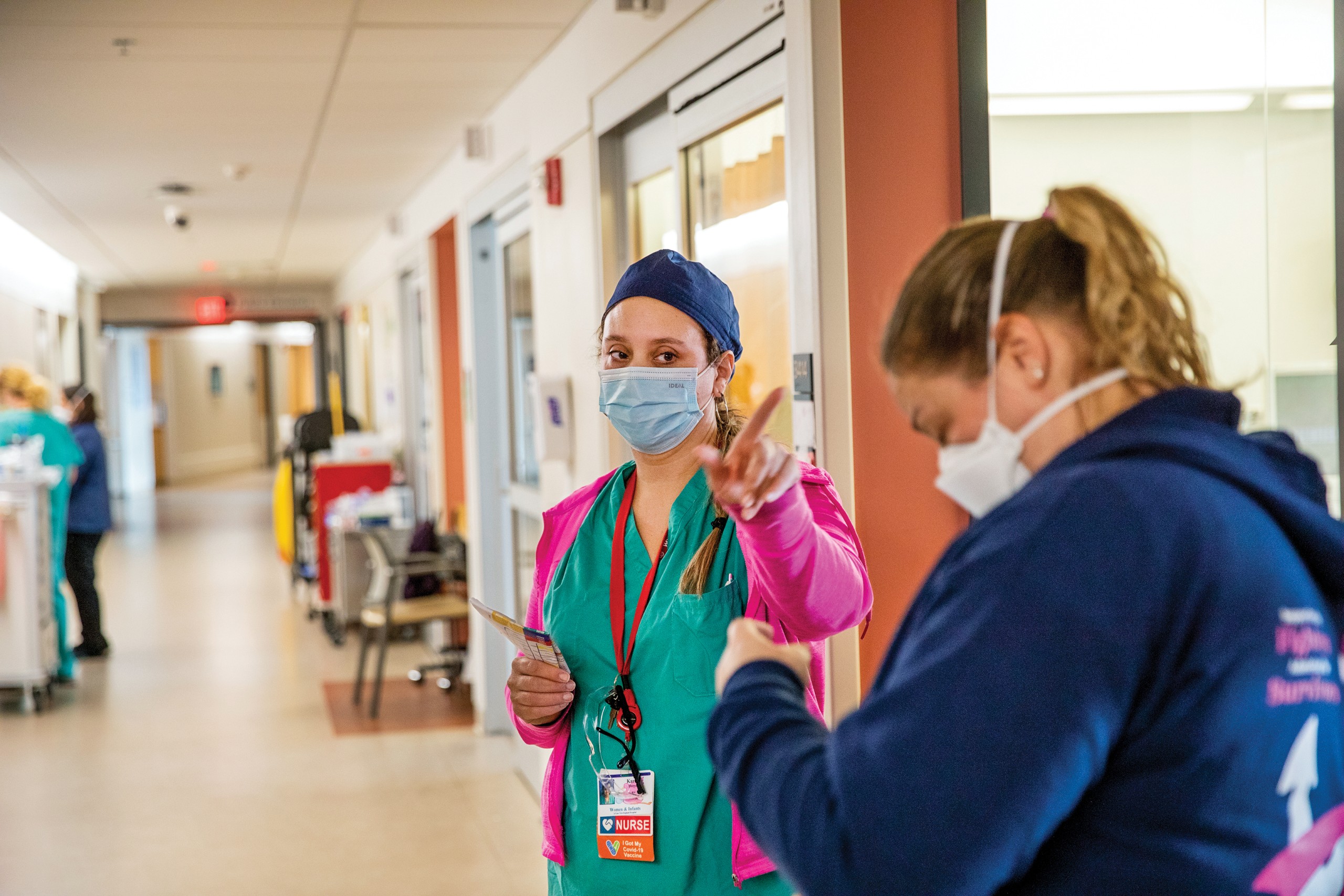 “Probably a couple months in I saw a lot more nurses saying, ‘Hey, I’m not sleeping. I’m struggling with this, I’m not sure I can go to work anymore. I’m crying on my way home; what are resources I can reach out to to make sure I’m OK?’ ”

Dr. Nadine Himelfarb, an emergency medicine physician and president of the Rhode Island chapter of the American College of Emergency Physicians, has been studying burnout for more than ten years. The term is commonly attributed to Herbert Freudenberger, a New York psychologist who in the 1970s used it to describe the physical and emotional exhaustion among volunteers and workers at an addiction clinic, including himself. In 1981, Christina Maslach developed a scale for assessing burnout, establishing emotional exhaustion, depersonalization and a reduced sense of personal accomplishment as the three factors widely used to determine burnout in individuals. In her own view, Himelfarb says burnout is often the result of a “values mismatch” where someone’s experience of a job does not align with the reason they entered that field in the first place.

“Everybody goes into medicine because of some version of ‘I want to help people,’ ” she says. “And what happens is you get into medicine, and you have to practice medicine within what has become the confines of the business of medicine, which is not always patient-centered. It is certainly not a system that oftentimes is set up to allow physicians to have the impact that they want or help people in the way that they see people need to be helped.”

Himelfarb experienced this in the fall of 2020 when she took a three-month sabbatical. At the time, she was working sixty hours per week between her clinical and academic responsibilities. Combined with the daily realities of working through a pandemic — undressing on the front porch after every shift to protect her immunocompromised husband and four children — she soon realized she needed to make a change.

“It was in August of 2020, and I realized that I was feeling this way. I had been working, I don’t know, a bunch of shifts in a row, and then I knew that I had a week off and I had this vacation,” she recalls. “That weekend, I felt like I could hardly get out of bed. I just had no energy. I didn’t know what was going on.”

Despite her research into the subject, Himelfarb didn’t immediately recognize her symptoms as burnout. It was only when she noticed they disappeared when she was no longer thinking about work that she realized she was experiencing what she’d studied for so long.

Kathleen Boyd is the director of the Rhode Island Medical Society’s Physician Health Program, a resource set up in 1978 to assist physicians experiencing health issues, including psychiatric and substance use disorders. In 2021, the program had its busiest year to date, with thirty-nine
referrals. Many of those were for medical professionals experiencing burnout or health issues such as increased substance use, anxiety, depression and post-traumatic stress disorder. The spike came after an initial lull in 2020, which Boyd attributes to physicians not having the time to seek help during the early months of the pandemic.

“I think one of the things that happened for front-line physicians was it was difficult to have time for self-care,” she says. “Everybody’s flat out. Getting help is really about self-care, and you have to kind of fit that into your schedule. For many of the front-line people, there wasn’t time for that.”

The trend of medical professionals struggling with burnout or mental health issues is not unique to the pandemic. Among the most common reasons for burnout cited by physicians in surveys conducted both before and during the pandemic is too much time spent on bureaucratic tasks, including charting requirements and paperwork. Other factors include long hours, a lack of respect from administrators or colleagues, insufficient compensation and the expanded use of electronic health records for patient documentation.

“That’s what we hear,” Boyd says. “ ‘I see thirty patients or fifty patients, and then I go home and have dinner and help my kids with their homework, and then I do my charting until midnight.’ And that’s kind of what’s burning people out. It’s really hard to have that boundary around your work life and your home life. It’s tough.”

In nurses, too, the effects of burnout can be long-lasting. A 2021 survey by the American Nurses Foundation found 34 percent of nurses considered themselves not or not at all emotionally healthy, and 42 percent said they’d experienced trauma as a result of COVID-19. Twenty-one percent said they planned to leave their positions within the next six months, while another 29 percent were considering leaving. 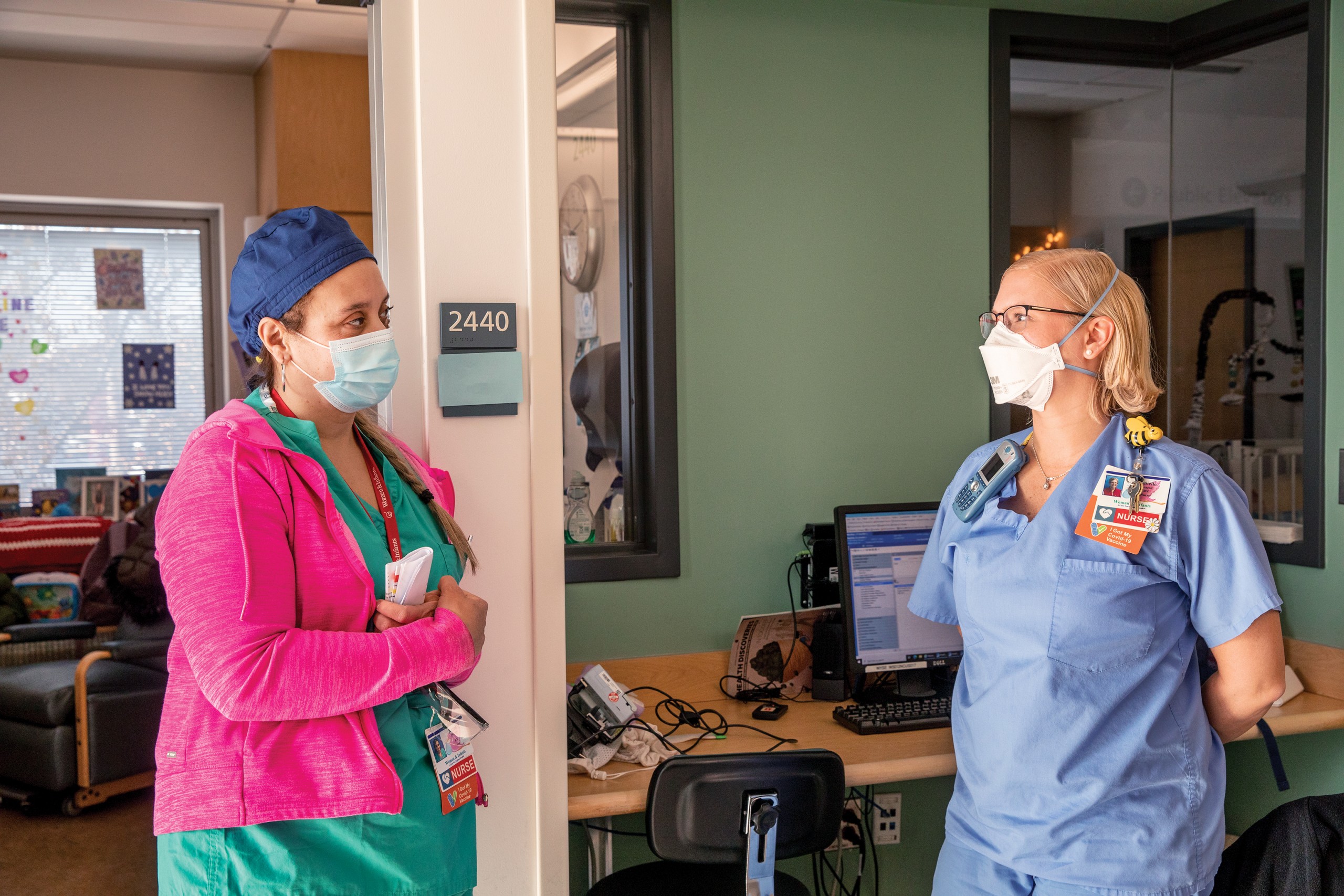 Boyd talks about how the application of business models to health care, including the introduction of productivity quotas, has changed the experience for professionals working in the industry.

“We’re in the business of caring for others, and if your capacity for compassion becomes crushed, it’s compassion fatigue. And your ability to connect with your patients is also crushed because you’re only allowed ten minutes to connect with them, then what’s left? I think there are an awful lot of physicians who are leaving the field. And nurses, too. There’s just a lot of people who are like, they’re done,” she says.