Newport and its Pirates: A Love/Hate Relationship

Pirates plundered their way around the world, but they spent their wealth in Newport.

Twenty-six men were marched out onto the sandy spit in Newport Harbor. Crude gallows had been constructed. Above it hung a black flag adorned with a skeletal figure piercing a heart. The men made speeches. Some, recently converted to Christianity by the town’s Anglican minister, began to warn others in the crowd not to make the same decisions they had.

A crowd from across the colonies listened to their words. Some had travelled hundreds of miles to be there; considering the year, 1723, that was no easy feat.

After the speeches and prayers, the business of the day was efficiently conducted: The pirates were hanged.

“That’s really when the tide turned,” says Gloria Merchant, author of The Pirates of Colonial Newport, a fascinating history of the pirates, smugglers and privateers of old Newport. “That was the largest mass hanging in the colonies. People came from all over the colonies just to watch.”

The executions of the Gravelly Point Pirates also marked a dramatic shift in the local perspective towards pirates.

“That was the turning point. We [Newport] want nothing to do with you,” Merchant says. “If we find you we will hang you.”

That might seem like a normal sentiment. Pirates were violent robbers who would murder and maim their victims without much of a second thought. But in Newport in the late 1600s, pirates were viewed as Robin Hoods of the sea rather than common crooks.

These early pirates didn’t plunder local shores; they sailed to the east coast of Africa and the Red Sea to steal their fortunes. They targeted Muslim ships ladened with goods and gold and sold their hordes in Madagascar, or returned to the American colonies to spend their newfound wealth. Newport welcomed them with open arms.

“We’re talking about Colonial Newport; it’s not a wealthy town. There were all kinds of navigational acts from England that kept the colony under its thumb: limiting trade, limiting access to cash,” says Merchant. “These
pirates were creating wealth. Not just the pirates, but the middlemen and the local businesses. They brought currency into the cash-starved colonies. Newport was beginning to feel some independence from Britain.”

One of these early pirates was Thomas Tew (of local rum fame). Native to Newport, Tew’s family had helped found the town and even appeared on the town charter of 1663. Tew made two forays into the Red Sea: The first brought him great fame; the second brought his death. It may seem like a relatively unremarkable career, but the lives of most pirates were similarly succinct. One of Tew’s contemporaries, however, had a lengthier and more storied life.

“Thomas Paine was one of the most interesting ones. If I could sit down and have a chat with him, I would love that,” says Merchant. “He came to Newport in the late 1600s. He took refuge here; he was wanted for piracy by England. He kind of bribed his way into being able to stay. He fought in King William’s War, was an experienced mariner, and he became a pirate. Then he became an upstanding citizen.”

After plundering Spanish settlements along Florida’s coast, Paine’s life took a dramatic shift upon arriving in Newport. He became a central figure in the community. He helped found Trinity Church, led Newport in its first naval victory (against French privateers) and started a farm on nearby Jamestown. 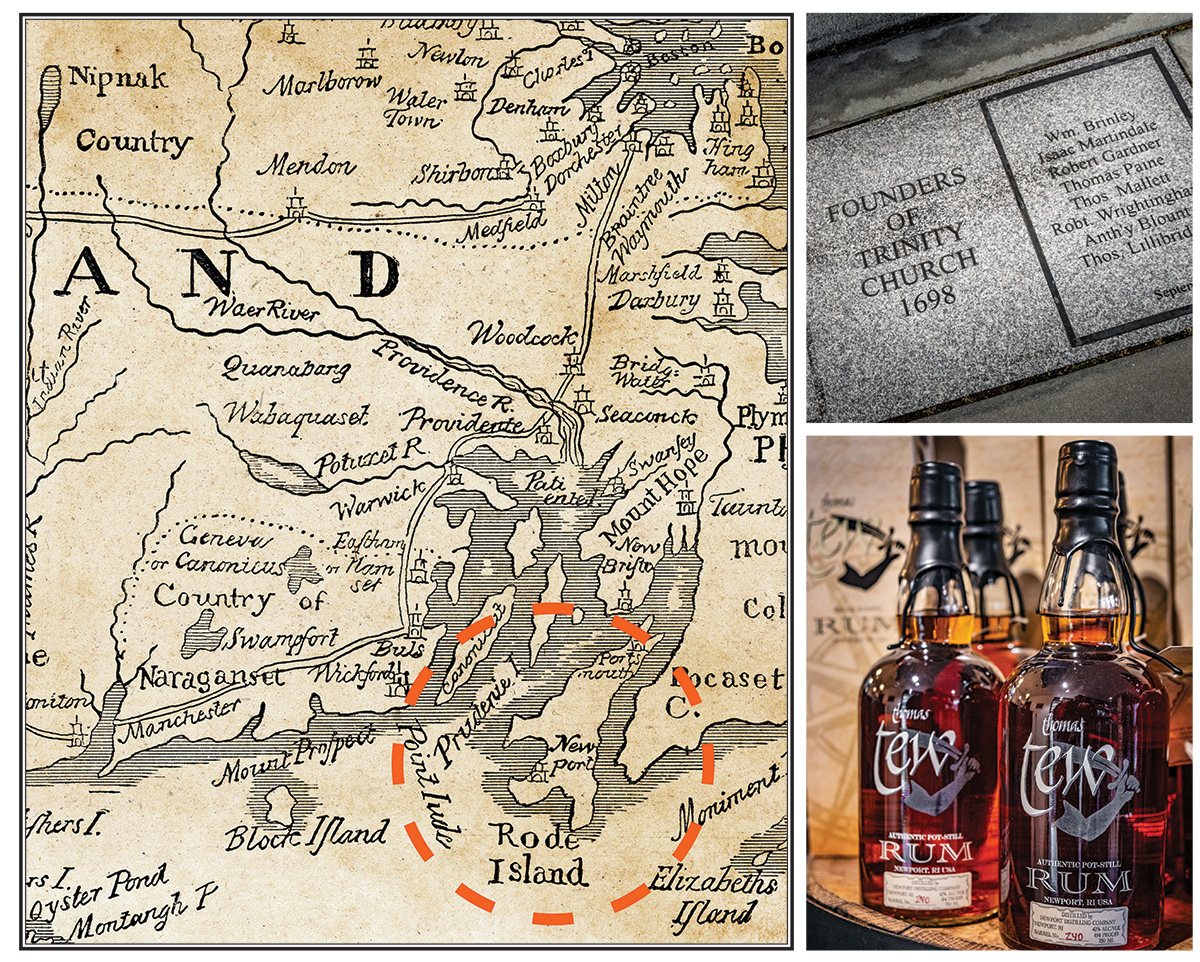 Besides Tew and Paine, there were numerous other local pirates: William Mayes, who was also owner of the White Horse Tavern, Sion Arnold and James Gillam, to name a few. But there were also untold numbers of Newporters that crewed aboard pirate ships. In a weak economy, the allure of piracy was almost too much to resist. Many locals joined the ranks as crewmembers to make their fortune in the Caribbean and Red Sea. Piracy was a way of life in the town.

What prompted Newporters to shift from welcoming pirates with open arms to staging one of the largest executions to date?

At the end of Queen Anne’s War, massive numbers of sailors in the Royal Navy were suddenly out of work, and they turned to piracy. This sudden explosion of criminal activity was not lost upon the English government.

“In the early 1700s, England had effectively policed the Red Sea, and the business was no longer as good as it was. The pirates moved to the West Indies, the Caribbean islands, and that became the spot,” explains Merchant. “They would winter in the Caribbean, but in the summer, they’d start up the Atlantic coast and raid shipping all the way to Nova Scotia. A lot of Newport merchants were being robbed and attacked by these men coming up from the Caribbean.”

As the people of Newport felt the sting of piracy firsthand, they began to retaliate. Pirates were unwelcome visitors to Newport’s harbor.

The mass execution of the Gravelly Point Pirates may have seemed brutal, but it was a measured response. The pirates they hanged had sailed with the sadistic pirate, Ned Low. Known to maim, mutilate and torture his captives, Low developed a monstrous reputation in the colonies. When the townsfolk managed to capture some of his associates, they were trying to deter future attacks.

Pirates were violent criminals, but they were also an integral part of Newport’s history. Their mark can be found throughout the town, whether it’s in the name of a school or the history of an old tavern. They also left a more indelible mark on the town, in many ways redirecting its history.

“Without the wealth and independence from Britain, Newport might have never developed like it did,” Merchant says. “Like a lot of dark chapters from our history, piracy has made the town, and state, what it is today.”