The three new bills place a ban on high-capacity magazines, raise the legal age to buy firearms to twenty-one and prohibit the open carry of a rifle or shotgun in public. 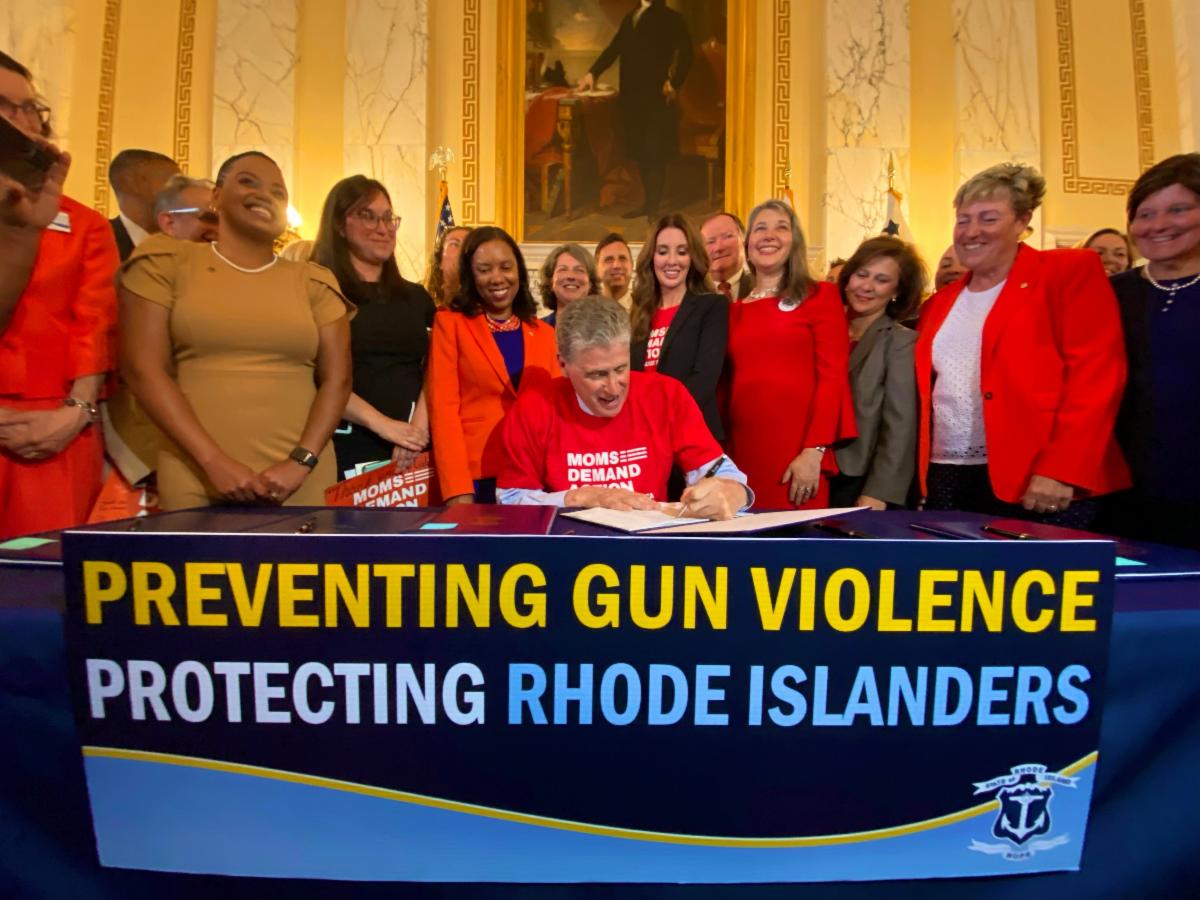 Courtesy of the Governor’s Office.

“As Governor, I am proud to sign a legislative package that will ban high-capacity magazines, raise the legal age to purchase firearms to twenty-one and prohibit the open carry of a rifle or shotgun in public – these measures can help saves lives,” he said. “My deepest thanks go out to the legislative sponsors and the thousands of advocates who stepped up and got the work done.”

The Governor was joined by Rhode Island’s General Officers, the House Majority Leader, the Senate Majority Leader, the Senate Majority Whip, the Senate Judiciary Committee Chairwoman, a number of state representatives, the founder of Moms Demand Action, the board chair of the RI Coalition Against Gun Violence, members of the Rhode Island State Police, members of the Rhode Island Police Chiefs Association and more than 100 local advocates who have worked to make these bills a reality. At the signing, many local leaders took the time to speak on the reasoning behind the new legislation.

RE: The ban on high-capacity gun magazines.

“High-capacity magazines have no legitimate purpose for hunting or self-defense. They enable shooters to unleash torrents of bullets and inflict maximum harm in mere seconds, making them a tool of the trade for mass shootings, drug trafficking and gang violence. They put the public, law enforcement officers and the user in greater harm. Making high-capacity magazines illegal to sell and possess will enhance public safety.” — Senate Judiciary Committee Chairwoman Cynthia A. Coyne (D-Dist. 32, Barrington, Bristol, East Providence).

“Uvalde. Buffalo. Sandy Hook. Parkland. Las Vegas. Orlando. Sutherland Springs. Boulder. Aurora…the list goes on. High-capacity magazines have enabled mass shooters to commit the most devastating, appalling, and most lethal attacks on the public in recent decades. With this bill, we are finally saying we will not tolerate these dangerous weapons. Our neighboring states have already prohibited high-capacity magazines, and we should join them in refusing to accept the risks they present to Rhode Islanders.” — Representative Justine A. Caldwell (D-Dist. 30, East Greenwich, West Greenwich)

RE: The raising of the legal age to purchase firearms or ammunition in Rhode Island from eighteen to twenty-one (with exceptions made in the cases of police, state marshals, correctional officers and active-duty military or National Guard members).

“People under the age of twenty-one are already prohibited from buying handguns in Rhode Island, but an eighteen-year-old — someone who might even still be in high school — can buy rifles and shotguns, including the powerful weapons that are often used in mass shootings. It is well-settled science that teenage and post-teenage brains are still developing. It’s common sense that we shouldn’t be selling lethal weapons to people who we’ve decided are not old enough to buy cigarettes or beer.” — Senate Majority Whip Maryellen Goodwin (D-Dist. 1, Providence).

“When our existing law prohibiting people under twenty-one from buying handguns was enacted in 1959, AR-15s were weapons that even the military didn’t have. No one envisioned that sixty-three years later, there would be millions of these high-velocity, extraordinarily lethal weapons in the hands of civilians. Certainly no one ever imagined that a teenager would go out and legally buy two of them on his eighteenth birthday along with hundreds of rounds of ammunition, then use them to massacre nineteen innocent children and two teachers at school. It’s not 1959. In 2022, we need laws that recognize the incredible killing capacity of modern weapons, and the serious gun violence epidemic we have in this nation. We need to put an end to the years of political inaction that is enabling mass shootings. I’m proud that today in Rhode Island, we are moving in the right direction.” — Representative Teresa Tanzi (D-Dist. 34, South Kingstown, Narragansett)

RE: The change in the state’s definitions of “rifle” and “shotgun” in accordance with federal law. This bill also prohibits the open carry of any loaded rifle or shotgun in public.

“The open carrying of loaded rifles and shotguns has been exploited in certain places to intimidate voters and protestors and to suppress free speech. Rhode Island already bans the open carrying of handguns without a permit. This would close a loophole in the law that allows the open carrying of long guns along any public highway, road, lane, or trail within this state.” — Senate Majority Leader Michael J. McCaffrey (D-Dist. 29, Warwick).

Local advocacy groups were thrilled by the changes.

“It has taken ten years of hard work and collaboration to build the support needed for these three lifesaving bills to pass. Together, with dozens of campaign partners, thousands of advocates, the majority of the General Assembly and all of our general officers, we have committed to creating policy that saves lives and protects our families, children, and communities from further gun violence. Collectively, we have unprecedented power and momentum to continue to strengthen Rhode Island’s gun violence prevention laws. To do anything less is not an option,” said Sydney Montstream-Quas, Board Chair of RI Coalition Against Gun Violence.

And as with any hot button issue, the public reaction has been mixed.

Congratulations to Rhode Island @GovDanMcKee – wonderful news on gun laws 👍🙏🏻👏. Thank you for leading the way and I hope you & New York are just the start of stricter more sensible sane gun laws in other states. Much respect to you and @SenWhitehouse – thank You

I have enormous respect for Sen Sheldon Whitehouse. He is one very intelligent, hard working Senator. I congratulate his state of Rhode Island for passing the gun laws tonight. All states should follow their example.

I’m happy to hear this, as a strong advocate for gun reform/ gun control here in CT, where because of our strict gun laws since Sandy Hook we’ve become a safer state and I’m glad that our eastern neighbor of Rhode Island has taken bold steps in the right direction! https://t.co/WxyZMCnW11

Rhode Island has the highest vaccination rate in the country, the lowest unemployment in my entire lifetime (34 yrs) & is ranked #2 in economic recovery from the pandemic, cannabis is legal, oh and today three new bills for common-sense gun laws are being signed. Well done. 👏🏻