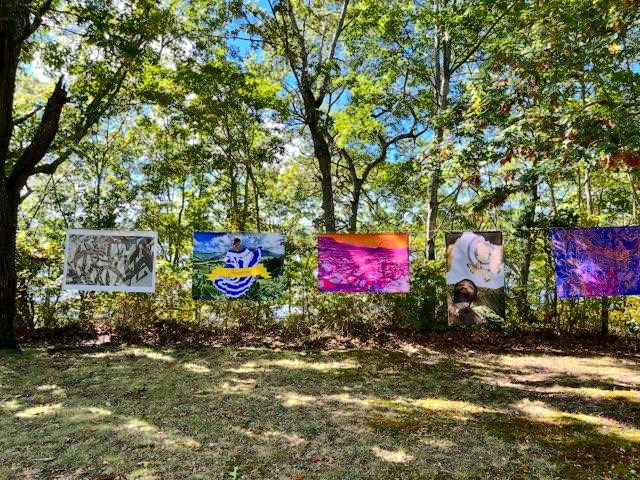 “Land and Liberation” on display at the King Benson Preserve in Saunderstown. (Photo courtesy of Movement Education Outdoors)

Joann Ayuso is on a mission to get more young people of color enjoying and learning about the outdoors.

She and her team at Movement Education Outdoors have collaborated with artist Shey Rivera on “Land and Liberation,” a new art exhibit that showcases the perspectives of young people of color as well as other artists on the natural world around them. Youth participants collaborated with artists to create work now on display at Saunderstown’s King Benson Preserve.

Ayuso, who founded the organization in 2018, says the exhibit came about after conversations with Rivera, a personal friend, about the world of environmental art. Both have roots in the Caribbean and were bothered by the fact that most artwork in New England tends to show a historically white perspective on the natural world as opposed to the views of Indigenous people and individuals of color who’ve lived and worked here for centuries. Government data shows non-Hispanic white people account for between 85 and 95 percent of visitors to public lands, despite only making up about 63 percent of the population.

“I thought, ‘How cool would it be if we just had a whole different lens and perspective of the land, specifically from the Black and brown and Indigenous perspective on art?’” Ayuso says.

Rivera got to work curating an exhibit featuring locally-based artists such as Becci Davis, Edwige Charlot, Jazzmen Lee-Johnson, k. funmilayo aileru and Savonnara Sok. Lee-Johnson also worked with young people in the organization’s programs to create their own artwork to display and sell. The resulting exhibit is now on display at the MEO lodge at King Benson Preserve, a former Girl Scout property the organization has been using as its base since last year through an agreement with the Nature Conservancy.

“These artworks actively recognize how Black and brown people have long had practices of building community in and with the outdoors. We celebrate and build upon these practices in our path to achieve outdoor equity. And we place images of outdoor BIPOC liberation and joy in our community’s imagination,” says Rivera, who uses the pronouns they/them.

MEO kicked off the exhibit on Saturday, October 8, with a dance performance and workshop by Haus of Glitter. Next weekend, they’ll continue the celebration with an AfroCaribbean culture day on Saturday, October 15, from 1 to 4 p.m., featuring food, music and a guided hiked by Ayuso. Ayuso says the day will also feature plenty of opportunity to participate in the great sport of dominoes — a game that has special significance in Puerto Rico, where she and Rivera trace their heritage.

“That’s how a lot of Puerto Ricans spend time outdoors,” she says. “If you would go to certain placitas, you’ll find the elder and sometimes even young people playing dominoes in the public spaces. And you have a bunch of hammocks that people are just hanging out in and chatting.”

Visitors will have the opportunity to purchase prints via the organization’s website, with half of the funds going to the artist and half returning to MEO. Ayuso says youth participants were elated to learn the art of screen printing with Lee-Johnson.

To learn more about Movement Education Outdoors or purchase a print from “Land and Liberation,” visit meoutdoorsri.com.