The celebrities were in town filming a new movie about America’s opioid crisis. 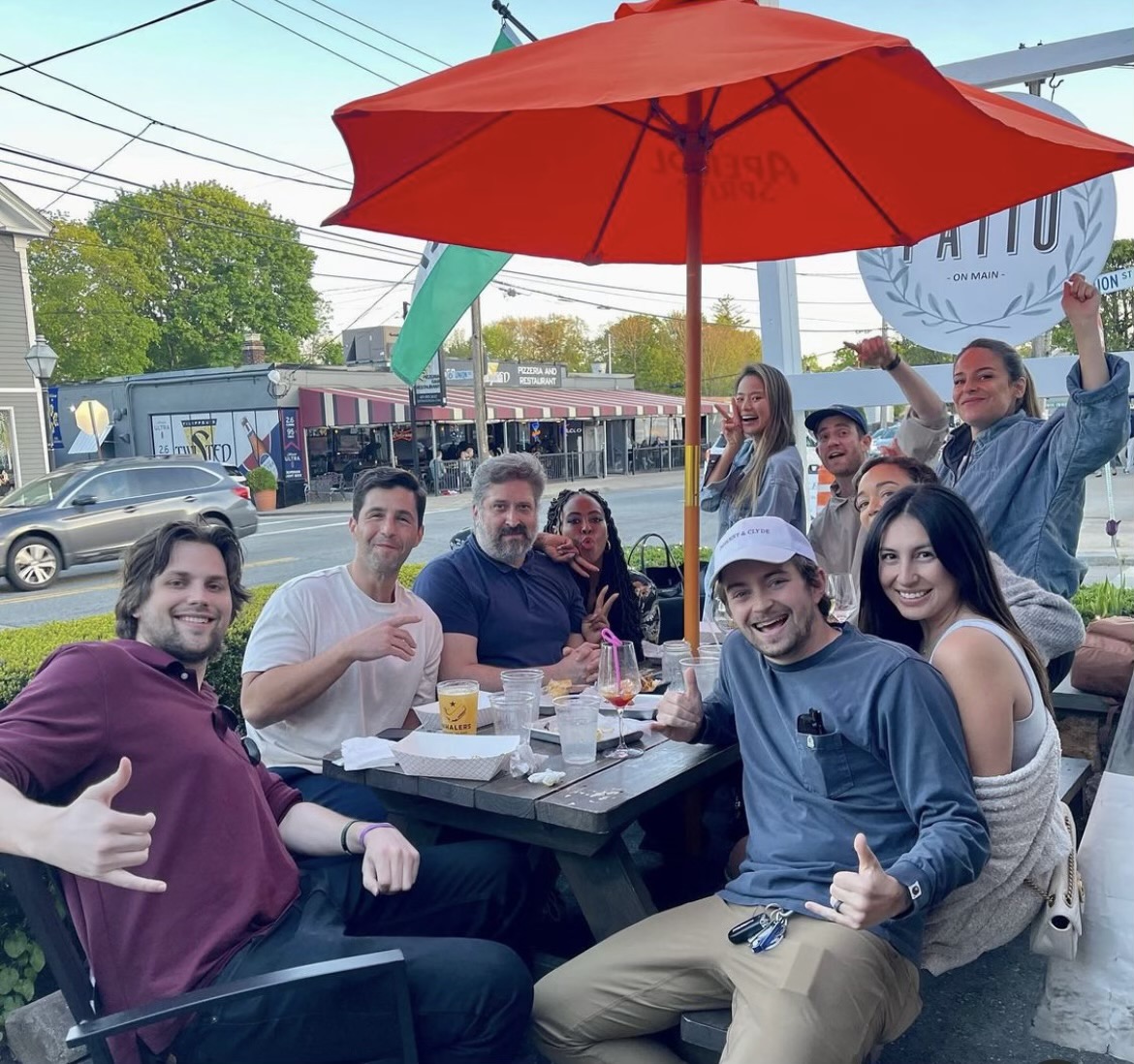 It was the busiest night the Patio on Main in East Greenwich had had in a while, so it’s understandable that it took the staff a minute or two to realize a group of big names had just walked on premises.

“I did about six double takes,” says Ava Dzilenski, a Patio on Main server who just happened to be at the hostess stand at the right time. “I thought, ‘Am I insane or is that Josh Peck? Is this a prank? What is going on?’”

She played it cool, though, and calmly showed the probable celebrities to a large picnic table along the Patio’s perimeter with some of the best views of quaint Main Street.

“All of a sudden Ava comes up to me and says, ‘I think I just sat Josh Peck at your table,’” Dzilenski’s fellow server, Nicole Braga, recalls. “I said, ‘No, I don’t think so.’”

Both fans of Peck since his days starring as one of the titular characters in Nickelodeon’s “Drake and Josh,” neither could quite believe that the actor would be in the smallest state, let alone dining at their restaurant. But sure enough, when Braga went to greet the table, Josh Peck was indeed sitting amongst the party. And he wasn’t the only famous familiar face: the star was also joined by the likes of Jamie Chung, Yara Martinez, Nichelle Hines, Ashley Madekwe and Bryan Greenberg.

“It turns out they are all in town making a movie. It’s called Junction and it’s about the Opioid Crisis—that day they had been filming in a medical building nearby,” Braga explains.

According to IMDB, Junction is set to premiere in 2023 and will address America’s opioid crisis from three different points of view: The CEO of a pharmaceutical company, a doctor and a patient. While Greenberg will star alongside Peck, Chung (whom, fun fact, Greenberg is married to), Martinez, Hines and Madekwe, he is also pulling triple duty as writer and (debut) director. In between making sure their needs were well taken care of that night, Braga had the chance to chat with them all about the film.

“Addiction runs in my family, so we were talking about that, and they were just so sweet about everything,” she says. “I told them I think it’s important to do a movie like that in Rhode Island just based on how small our state is. It’s really a bigger crisis than people like to act.”

The Rhode Island connection, at least in part, comes in the form of one of the film’s production companies: Verdi Productions has an office located just down the street in East Greenwich. Owners Chad A. Verdi and his son Chad Verdi Jr. were also in attendance that night (as well as producer Aaron Kaufman, whose other credits include Sin City: A Dame to Kill For and Machete).

“Chad also owns Wash Ashore Beer Company, which we serve on tap here at the Patio, so we have a good relationship with them,” says Patio owner Angel Winpenny.

Yet, aside from a handful of local athlete and politician appearances, this marked the Patio’s first major celebrity sighting since its opening in early 2020 (yes, right before you know what went down). Braga says many a passerby did a doubletake as they peeked under the eatery’s tent, while customers seated at her other tables inquired about the larger party throughout the night. The staff remained total pros, though, ensuring their famous guests felt as comfortable as possible during their stay.

“I never once was like, ‘Oh my God, hug me brother!’ Everyone wants to say something along the lines from ‘Drake and Josh,’ but I kept it cool,” Braga says with a laugh. “He was very soft spoken and whenever I handed him something he was always like, ‘Thank you so much!’ I didn’t want to bombard him.”

She and Dzilenski also made sure to wait until Peck was finished with his meal before snagging him for a couple photos on his way out. 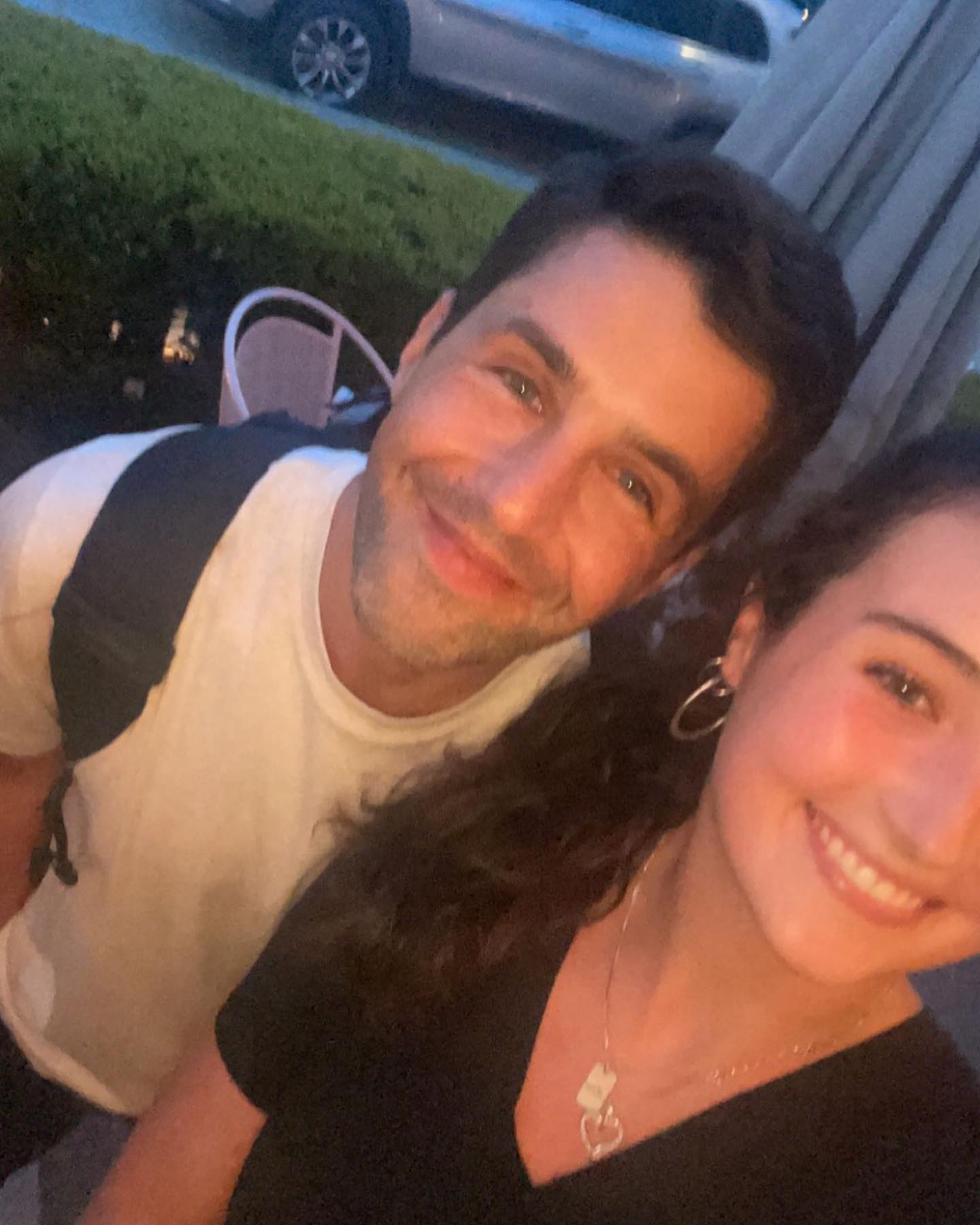 “I had texted my friends saying Josh Peck is at my restaurant, and they were like send a picture or it’s not true,” Dzilenski says. “I went up to him and said, ‘I swear my friends think I’m lying!’ And he said, ‘Oh, well, let’s take a picture and prove them wrong!”

Peck was also more than happy to snap a pic with the server who went above and beyond to ensure he and his friends had a great experience. 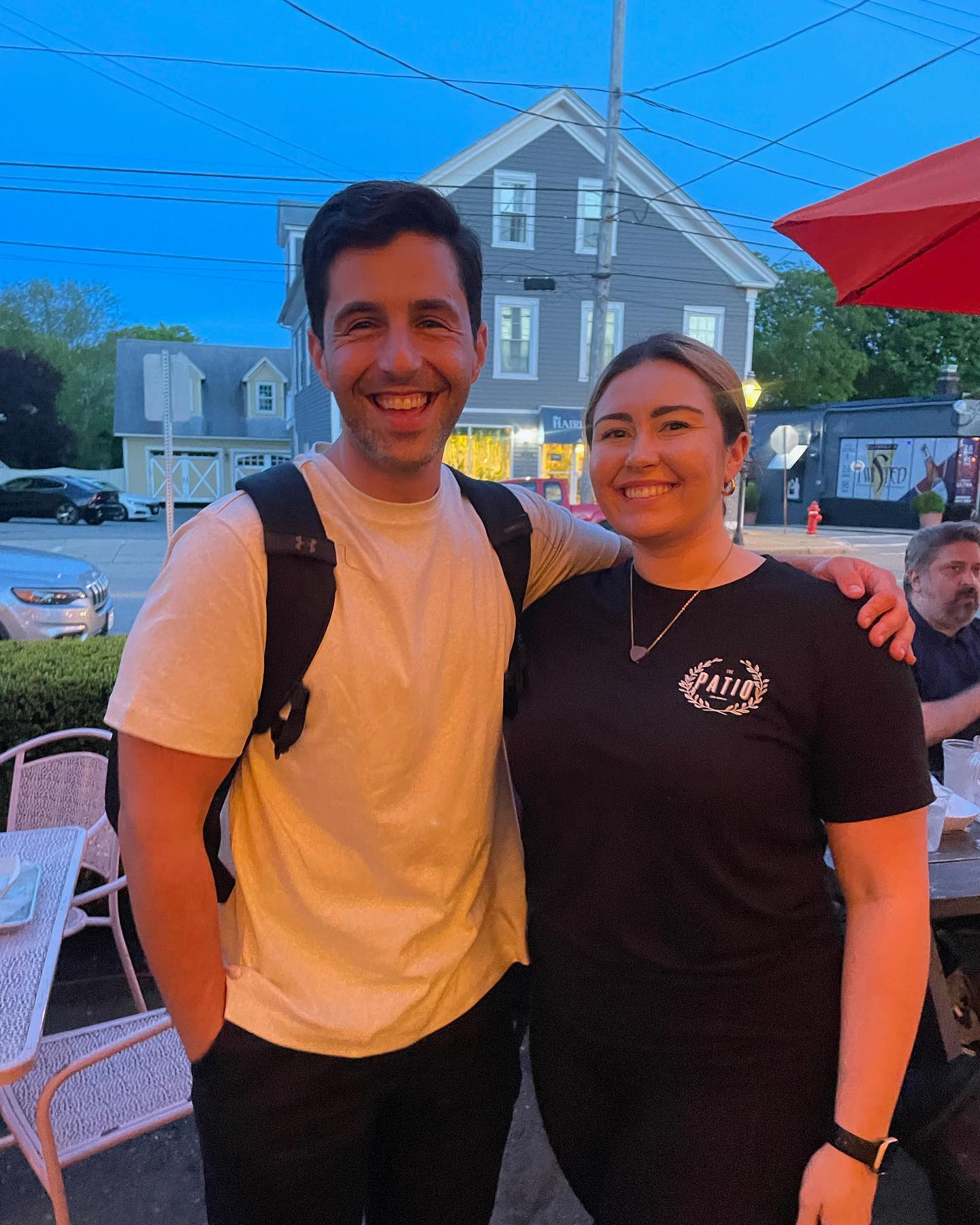 “I was like, ‘Do you mind? And he said, ‘Oh my God, yea of course.’ He was so nice about it.” Braga says. “In one of the photos you can see he’s laughing because I said, ‘I probably look like a blueberry muffin right now.’ It was our first busy night so I had been running around and sweating, and I also was just overwhelmed with them being here. I was like everything needs to be perfect!”

By the sounds of it, everything was perfect. So much so that not only did the group match her tip to the bill, but the few who stayed behind for a couple more rounds of drinks made sure to match her tip again. She and the Patio also received some amazing Yelp reviews from Chung and Kaufman.

“Everyone was so gracious,” Braga says. “And not just to me!”

Prior to the celebrities’ arrival, an older couple had originally been sitting at the back picnic table. When Braga had asked if they would mind moving over to another smaller table in order to accommodate the large party that had just walked in, the couple gladly obliged without a fuss. Chung didn’t let the kindness go unnoticed.

“She had me put their first two rounds of drinks on their bill, and then I think when I walked away, they all thanked the couple for moving,” Braga recalls. “The couple didn’t know who they were at first, but when I said they were actors and actresses, they looked them up and they said, ‘Oh wow! And they bought us drinks?’ They were so flattered.”

Braga had always wondered what it would be like bumping into a famous figure, but she never imagined it would happen at her place of employment.

“With celebrities, you kind of expect them to be jerks. I was waiting for them to say, ‘Hey, I need this now!’ But nope, they were all very sweet and humble, like, ‘We know you’re busy but whenever you have a second we’d love to put some more food in. No rush!’” she says.

So, between the wonderful experience and the buzz, perhaps new specialty menu items are in order?

“Well, Josh just got a Caesar salad and water!” Braga laughs. “But that would be fun. Like a ‘Pecker Up’ spicy paloma.”

The drink would fit in well with the bar’s offerings, which include everything from an indulgent espresso martini to a refreshing jalapeño margarita to craft beer selections. Meanwhile, the Patio’s main menu mainly consists of patio bites, many of which are named after iconic Main Street destinations, like the Odeum fried chicken sandwich, the Troll Shop Teriyaki and the Varnum Veggie sandwich. While it’s unclear whether the stars will be in town much longer, the al fresco spot is clearly worth the visit regardless of any celebrity sightings. If you’re interested in stopping by, the Patio offers indoor and outdoor heated tent dining for both reservations and walk-ins, as well as takeout. The summer months will also feature a weekly rotation of live local musicians on weekends. Plus, be sure to keep an eye on the Patio on Main’s social media (@thepatiori) in the coming weeks for summer menu additions and a very exciting announcement.