Inside St. Ann’s in Woonsocket, the Sistine Chapel of New England

The hundreds of faces in the majestic frescoes were modeled after people in the community.

Driving past the St. Ann Arts and Cultural Center in Woonsocket, you’d be excused if you wrote it off as just another church. Maybe a glimpse of its glittering stained glass or its towering height could make you pause for a moment before continuing your day. Like so many other people, you would be passing by a building overflowing with art and history. 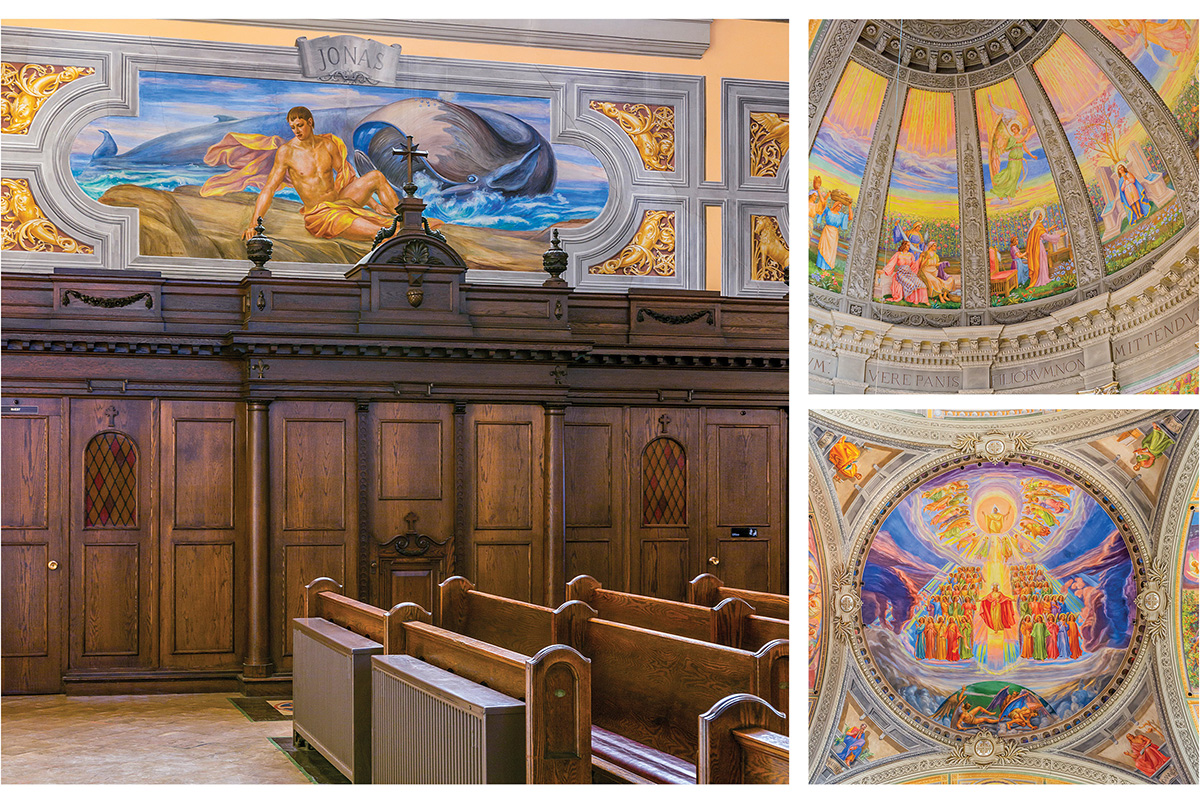 St Ann’s Church was built between 1914 and 1917 by French-Canadian millworkers in the modern French Renaissance style. All kinds of lighting, representing 57,400 watts of electricity, illuminate St Ann’s. 475 images of parishioners are immortalized in the frescoes.

St. Ann’s Church was originally constructed in 1890 as an uninspired brick building that housed both the church and a school. It served the growing working-class French-Canadian community in Woonsocket, which eventually comprised 85 percent of the town’s population. As the number of parishioners increased, so too did the demands on the church. In 1914, construction began on a bigger and better St. Ann’s. It was estimated to cost $150,000, an enormous sum of money at the time.

“And the parishioners literally donate nickels and dimes, and that’s how this place gets built,” says Joe Petrucci, a tour guide at St. Ann’s Arts and Cultural Center.

With a ceiling sixty-five feet high, enormous bell towers and a sprawling nave, the church was a massive structure when it opened for its first mass in 1918.

“This was the hub of the community. All around here were tenements, and people would flock to the church,” says Petrucci. “The church provides entertainment and socialization, as well as religious service. Next door, they built St. Ann’s Gymnasium. It had a vaudevillian theater with 750 seats, workout room, running track and bowling lanes. It had a library with 1,000 books, all in French. Everything was all brand new, and it became part of the community.” 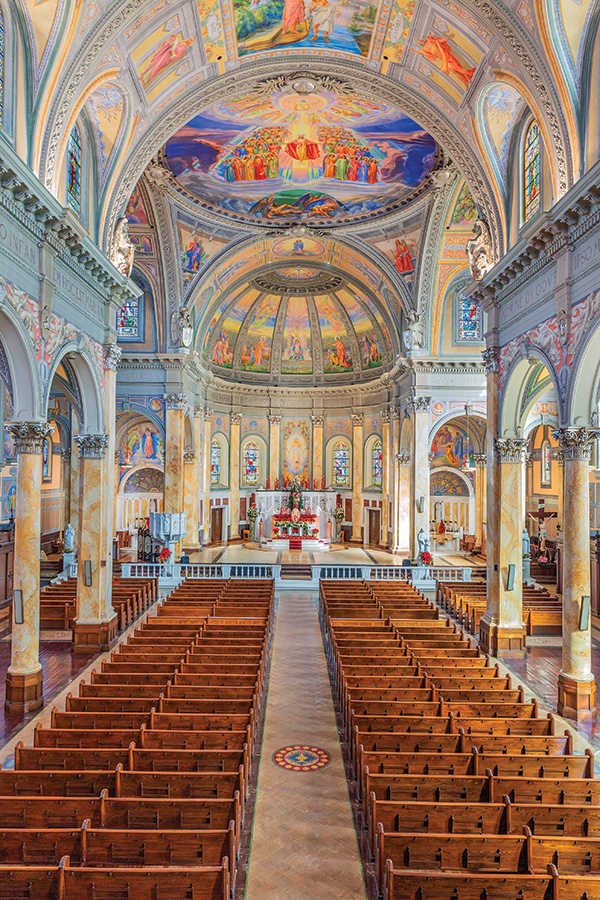 With seating for 1,500, St Ann’s is said to be the home of the largest collection of fresco paintings in North America. Photography by Sarah Farkas.

In the stucco walls of St. Ann’s, Nincheri saw a blank canvas — an opportunity to create his own masterpiece in fresco.

“He knew when he walked in, and the walls weren’t finished, he said to himself, ‘I’ve got my own Sistine Chapel. I can follow in the footsteps of Michelangelo,’” says Petrucci. “He walks in, looks around, leaves. Comes back with this lovely statement of work: $25,000.”

Nincheri slaved away on his magnum opus for eight years, painstakingly painting directly onto wet plaster. Because of the fresco technique, there was no room for error, and each portion had to be completed within a few hours. He built up and disassembled scaffolding to reach each section of ceiling. Angels, demons, saints — the innumerable swathes of figures that cover the church ceilings and walls slowly started to take form.

“There’s about 475 faces up there, and the models used for them were either parishioners or people who lived in Woonsocket,” says Petrucci. “The kids who modeled for him got twenty-five cents and a peanut butter sandwich. And he would give a special place to people he liked.”

The figure of Saint Cecilia, the patron saint of music, was based on the church’s organ player, who kept Nincheri entertained with popular music from the ’40s and ’50s while he worked. A scene of Jonah and the whale is emblazoned on one wall: Jonah was modeled after the church’s janitor who regularly helped Nincheri. Marguerite Forget, a member of the church choir, was Nincheri’s inspiration for the angels, representing virtues like faith and charity.

Nincheri also had a place for those people he didn’t appreciate.

“In the Revolt of the Angels Against God, the archangel Michael stabs a fallen angel. The model for that angel was the Mother Superior, who Nincheri used to butt heads with,” says Petrucci. “Another example: Nincheri says to one of the nuns, ‘Send me your two worst behaved boys.’ And they were the devils in the Last Judgment.”

For a working-class community struggling to make ends meet, the church was a source of hope. Now, they could see their own faces spilled across the magnificent cathedral. The church wasn’t merely a place for the community to gather; it was a reflection of it.

For about fifty years, parishioners attended mass underneath the spectacular frescoes, but with time, attendance slowly dwindled. The diocese had to make a difficult decision: They closed the church.

“It’s not cheap running a place like this. It can cost more than $10,000 a month to heat and $2,000 in electricity,” says Petrucci. It wasn’t economically feasible to keep the church open.

A group of volunteers and former parishioners came together to rescue the beloved church. They created the St. Ann Arts and Cultural Center to preserve its historical and artistic value. “At first a lot of people felt we might be going against the diocese. We weren’t going against the diocese. We’re trying to save your memories; we’re trying to save your culture,” says Wally Rathbun, chairman of St. Ann’s board.

The center, staffed entirely by volunteers, offers tours of the church and reuses the space for public and private events. Concerts, dinners, weddings, parties: St. Ann’s is a venue open to anyone in the local community or beyond.

The staff also tirelessly maintains the aging building. From climbing around the perimeter of the ceiling to change lightbulbs to staying in the church during storms overnight to make sure it isn’t damaged, they are dedicated to protecting this place.

“This is a living scrapbook of the generations that came before us,” says Rathbun. “And this is what we have to hand down to the next generation. We’re just the caretakers here.” stannartsandculturalcenter.org