Inside Boothden, an Exquisite Waterside Retreat with a Dramatic Backstory

Architect David Andreozzi channeled the past for this dramatic restoration by the Sakonnet River.

Second Act
Boothden, like its maker, came dangerously close to a tragic ending.

The Middletown estate was built circa 1883 for Edwin Booth, a famed thespian who, then and now, is remembered as the older brother of Lincoln assassin, John Wilkes Booth. His brother’s crime cast a pall on his career but, by the end of his life, the elder Booth was regarded as the best Hamlet of his time. He founded a social club, the Players in Manhattan, that still stands today. 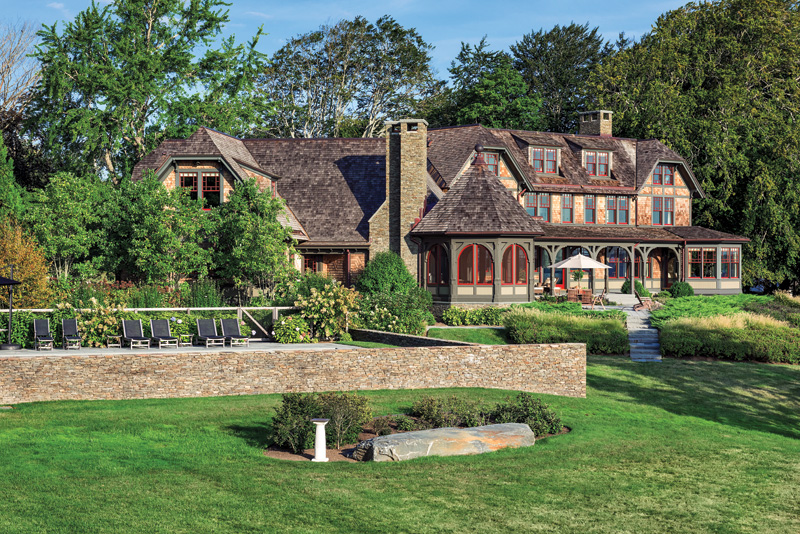 Landscape architecture firm LeBlanc Jones was challenged with creating a subtle grading plan for the lawn, which rolls to the Sakonnet River. At center, a large stone found on the property, which resembles a whale, was repurposed as a bench. Beyond it, a pool is nestled behind a stone wall. Photography By Aaron Usher.

Boothden, too, could have crumbled under external pressures. The once-grand estate, which boasted a dance hall, stables and a windmill folly, had moved and warped and rotted over time, says architect David Andreozzi, who was tapped by a preservation-minded couple to bring it back to glory. Truth be told, there wasn’t much to save. The foundation was rubble and many of the original stylistic moldings were long gone. But that didn’t dissuade the owners from preserving what they could.

Explains Andreozzi, “We made a decision to save the core of the house and recreate it in the spirit of architect Calvert Vaux’s original Boothden.” 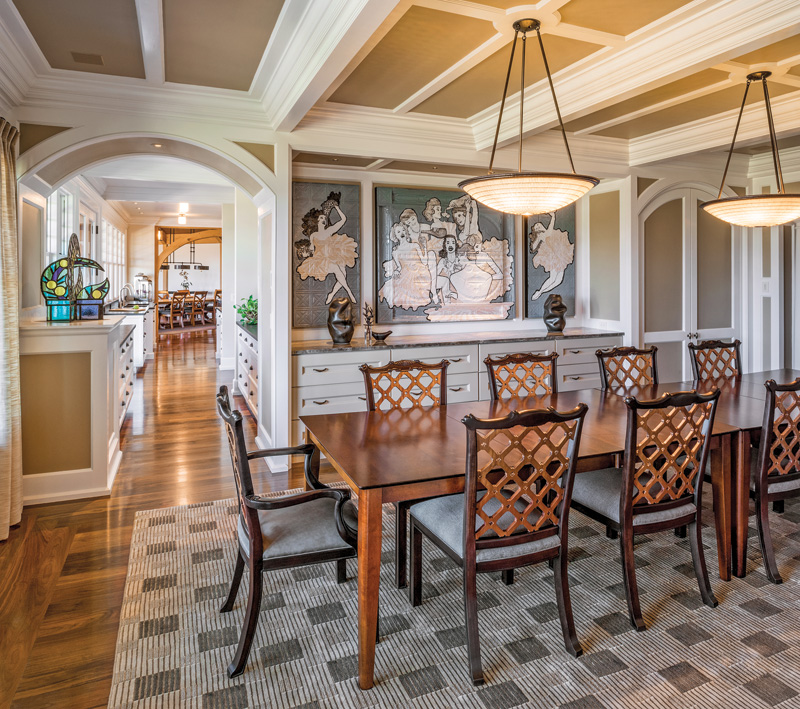 Scene Change
Andreozzi found himself walking a line between past and present. Through extensive historical research, he conjured Vaux for design inspiration while also considering Boothden’s modern purpose — namely a place for gatherings set against stunning views of the Sakonnet River.

Problem was, the house, in its original siting, didn’t maximize those views. So Boothden was picked up and moved to the front yard. A new foundation was poured and the house was moved back to the approximate original location with a slight rotation toward the water. A large addition, which doubled the size of the house, was added later.

“As we went through the process, I felt this bond and connectivity to the two-by-fours,” says Andreozzi, who collaborated with Kirby Construction and Jutras Woodworking on the build.

Connectivity remained a touchstone: to the past, to nature, to friends and family. The homeowners are generous entertainers, so the team — which included one of the homeowners, who is a former interior designer — was charged with creating common spaces that elevated form and function and, Andreozzi adds, were “sandy toes approved.” 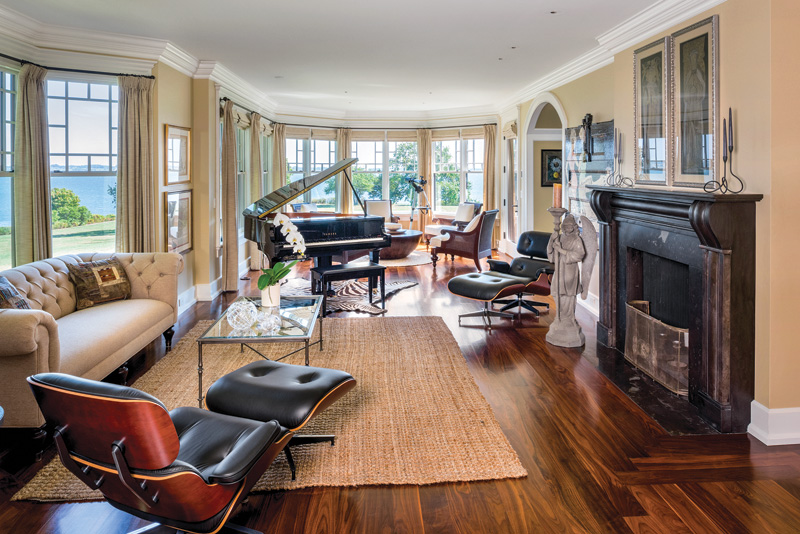 An intimate family room affords views of the lawn and water. Photography By Aaron Usher.

High Drama
Gone are the small spaces of yore. Once cramped, the great room at Boothden now soars.

“The beams celebrate the essence of the great Stick-style interiors of the turn of the last century,” Andreozzi says. “It’s a tall ceiling, but the beams bring it down and reduce the scale so there’s unbelievable balance.”

Open, free-flowing spaces encourage togetherness, too. Visitors often enter with bags of food and cases of wine — “the recyclables, you can’t even imagine!” Andreozzi says — and, in all practicality, they needed places to put things down and tuck them away.

A strategically sited, massive kitchen island was key. So, too, was a casual dining table between the great room and the kitchen. The formal dining room, a space for intimacy and conversation, is sited behind the kitchen and is open to a sculptural, handcrafted staircase inspired by eighteenth-century designs.

“It’s one of my most favorite dining rooms,” says Andreozzi. “It’s amazing; I always see it as a stage set.”

Coffered ceilings heighten the drama and, opposite the stairs, a soothing view of the property completes the scene. 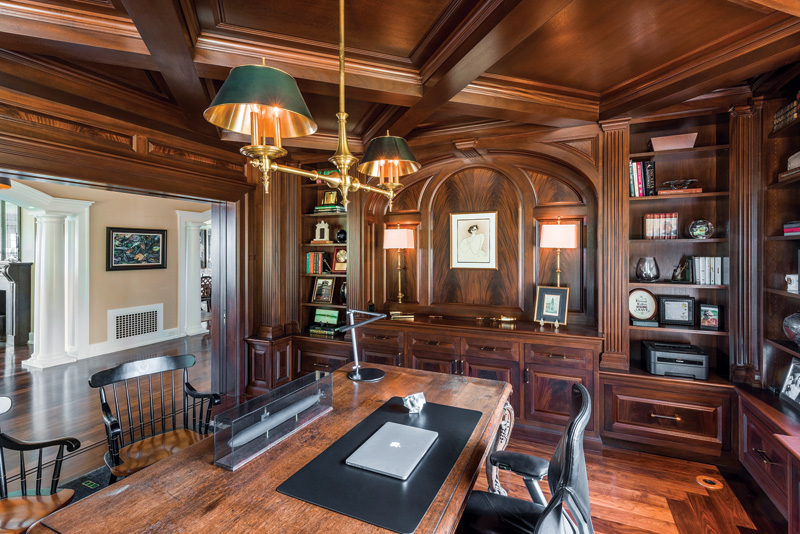 Crowd Pleaser
Andreozzi recalls visiting Boothden just after the homeowners moved in. Some wrap-up construction was in the works, but no matter: “There were people everywhere I looked,” he says. Kids were playing board games at the kitchen island and in the family room. Beach shoes and toys adorned the waterside porch. Upstairs, a couple was taking a nap with the door ajar.

“It took me back,” Andreozzi says. “It was even more than a home; Boothden had come alive again.” 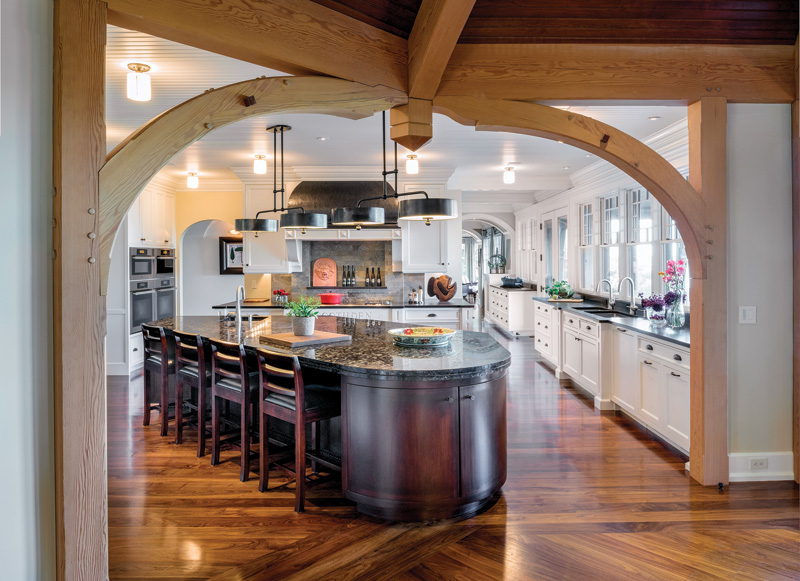 The kitchen island is well-suited for crowdsourced meal prep. Photography By Aaron Usher.

Andreozzi, who counts the homeowners among his personal friends, has become a fixture at Boothden, too. Next July, his daughter will be married here.

Of the down-to-Earth homeowners, Andreozzi says, “They were lucky enough to be successful that they could commit themselves as patrons of this piece of property and as guardians of this piece of architecture. It is so opposite of, ‘Look at the fancy thing we bought.’ Many weekends, it’s close to full.”