Inside an Eclectic East Side Home Modeled After a Maine Library

The Freeman Plat house was decorated by its owner, the legendary Norma Winkler. 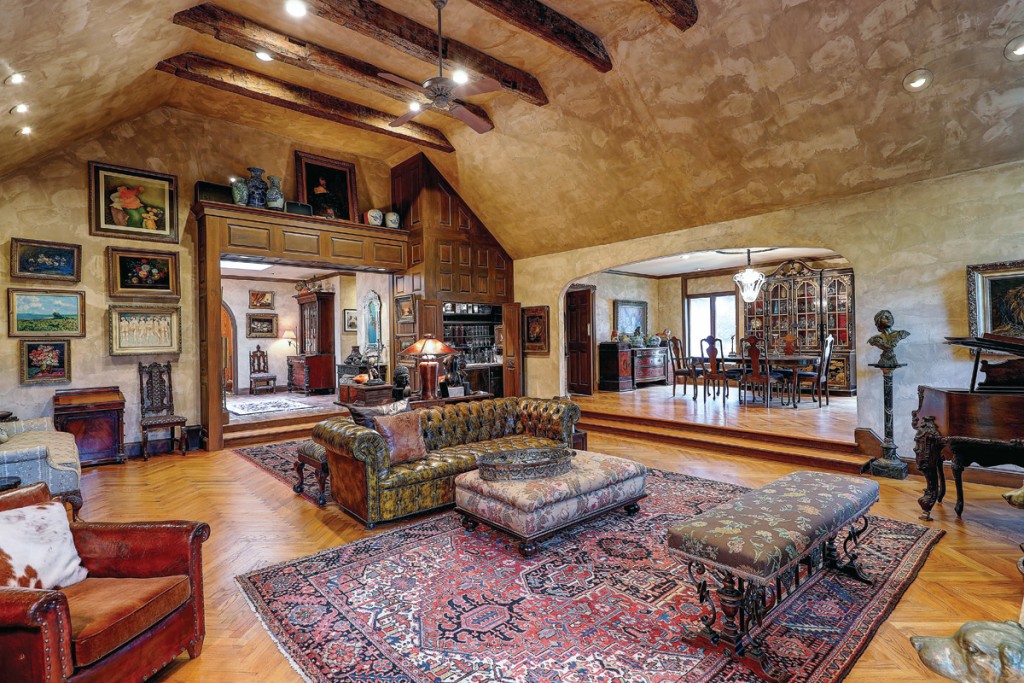 Traci Maceroni remembers wanting a mother like Donna Reed. Instead, she got something more like Honey West.

“She was every bit the unaverage housewife,” says Maceroni. “She was a hot ticket; she used to wear a bandeau and sunbathe in the yard. She was glamorous.”

Maceroni and her sister, Heidi Loomis, grew up on Lorimer Avenue on the East Side of Providence. Their father, Neville Winkler, ran a jewelry business and their mother, Norma, served as a second set of eyes — quite literally; Neville was colorblind. A nurse by trade, Norma was also an antiques collector, a world traveler and a patron of local arts.

In 1980, when the sisters were grown, their parents sold their family home and bought a plot of land about a mile down the road in the historic Freeman Plat district, a neighborhood rich with Neo-Georgian and Tudor-style homes. It was Norma’s chance to build the house she’d always wanted, Loomis says — one filled with art and architectural treasures she’d amassed over a lifetime.

“She just had a verve for beauty,” says Loomis. “That was a big part of our lives.” 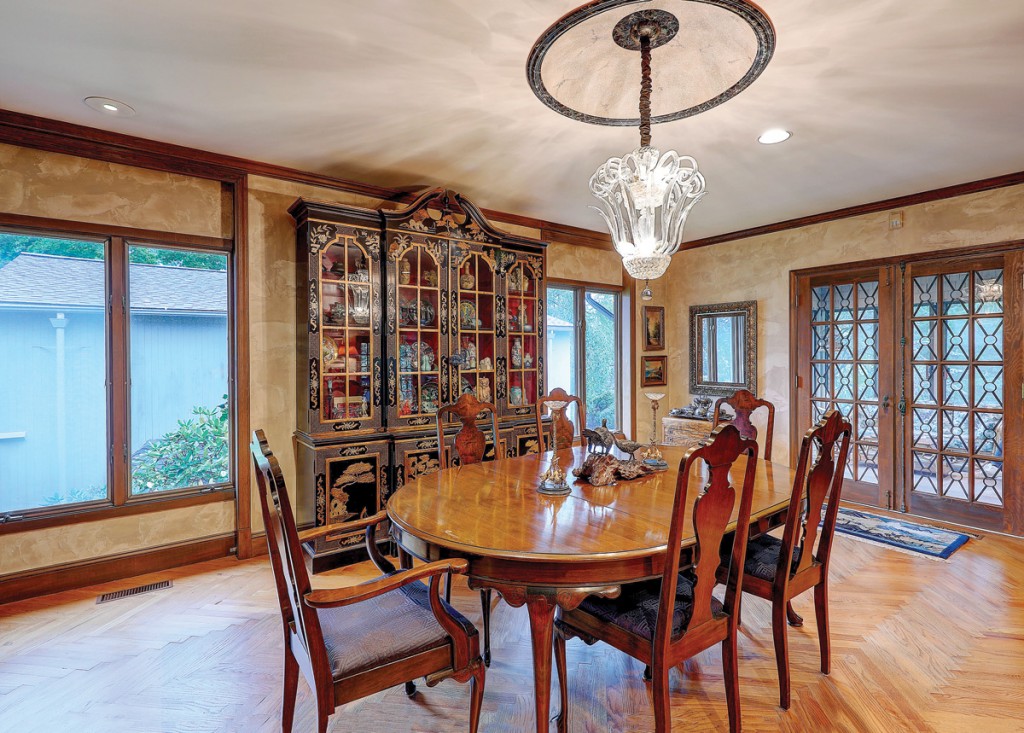 Norma designed her dream house long before HGTV, Houzz and Pinterest turned interior design into a national pastime. She looked to Architectural Digest for inspiration but, more than anything else, she was driven by her instincts.

The home would be a culmination of a lifetime of collecting — not just valuable antiques sourced from her travels or her friends’ shops along Hope Street in Providence, but also architectural salvage she’d accumulated over decades. Early drawings of the house incorporate such finds, including wide-plank pine boards and beams sourced from a local barn and a reclaimed slab of wood affixed to a kitchen wall.

“It was all purposely sought out and collected just for where it ended up,” says Loomis of her mother’s design strategy.

Norma needn’t hire spatial consultants nor interior designers. Instead, she worked shoulder-to-shoulder with architect Charles Goudet to deploy her vision.

“She was a woman with conviction and she knew what she wanted,” says Maceroni. “She really didn’t feel like she needed anyone’s advice.”

The visual language of the house is elegant and multifaceted, a scheme that says less about individual aesthetic movements and more about their collector.

“She mixed everything up: Art Deco, Asian,” says Maceroni, adding that her mother also collected work by regional artists including Phillip Richards, Emma Swan and Bill Hall. She sourced art and antiques from the Providence Art Club, Rustigian Rugs, Leonard’s Antiques and long-ago Hope Street mainstays, the King’s Ransom Antiques and Preamble Antiques, which were owned by close friends.

In nearly every room, stained and leaded glass add color, texture and privacy. Neville insisted on wrought iron for many of the windows, a protective measure that kept his beloved wife safe long after his death in 1990. 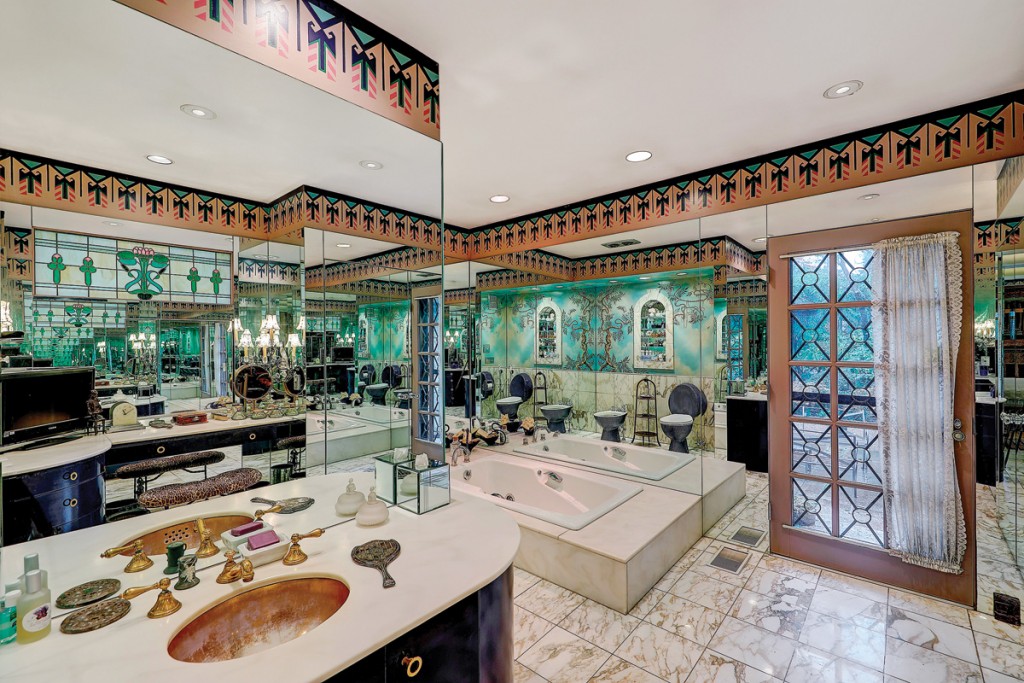 Gold-veined granite in the “hers” bathroom was sourced from Kenneth Castellucci and Associates, a cousin with a quarry in Italy. The sink basin is hand-painted gold. Reflected in the mirrors above the bathtub is another mural by J.A. Rensch. Photography by Chris Whirlow/Residential Properties.

Beauty was a major factor in the home’s design, but function was equally important. Over the years, an in-law apartment — originally built for her mother-in-law — accommodated visiting opera singers, interim presidents for area nonprofits and other luminaries. The home was also the site of fundraising galas, birthday parties and other community events. Maceroni recalls an anecdote from one such extravaganza, where then-Providence Mayor Buddy Cianci tried to convince Norma to sell the place to him.

“She just emerged herself in this culture and circle of people who loved beautiful things,” says Maceroni. 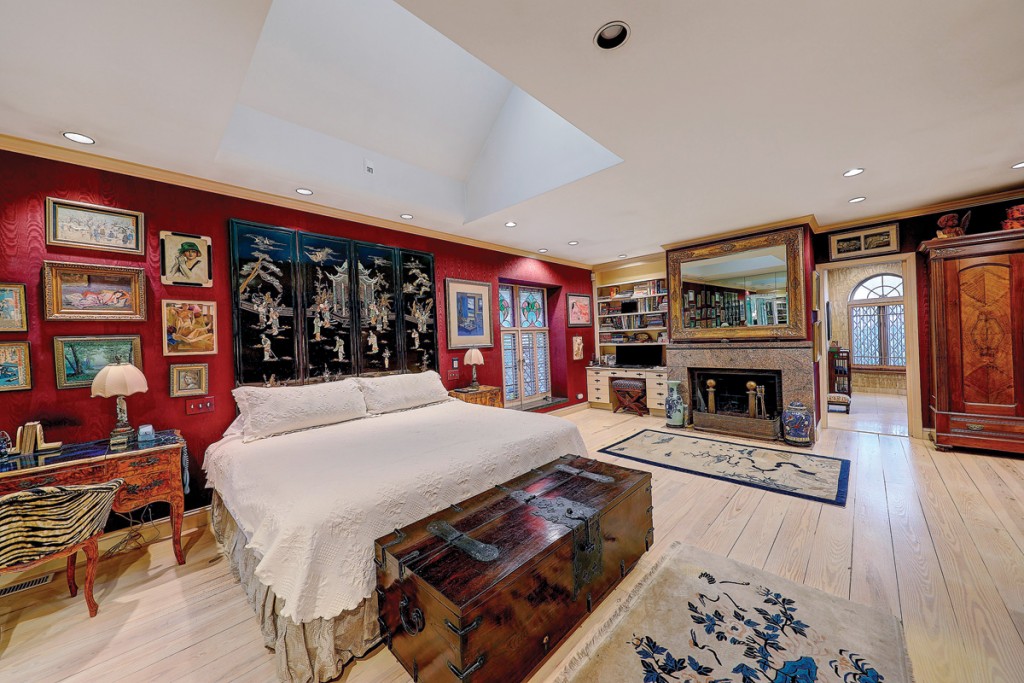 In the bedroom, Norma deployed Asian panels for a headboard and footed the bed with an antique Korean chest. The wallpaper is silk moire. Photography by Chris Whirlow/Residential Properties.

The house, finished in 1981, was the new kid on the block but it fit right in. Its storybook stone veneer, projecting front wings and turret — modeled after a public library in Ogunquit, Maine — resembled other Tudor-style homes in the Freeman Plat neighborhood, a historic district painstakingly designed and curated by the Freeman family in the early twentieth century. 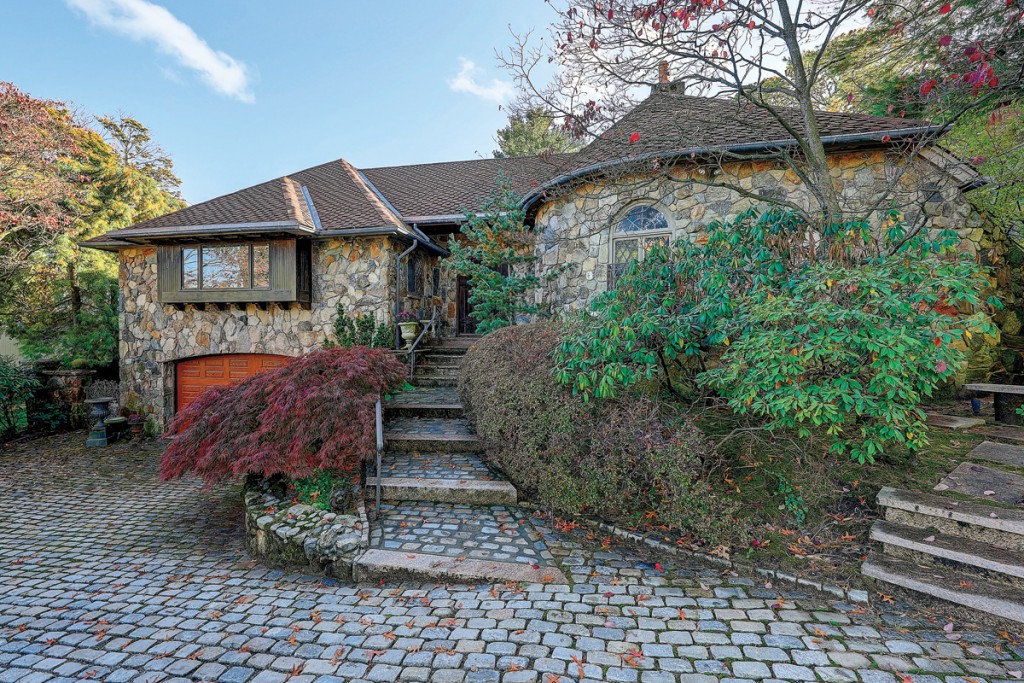 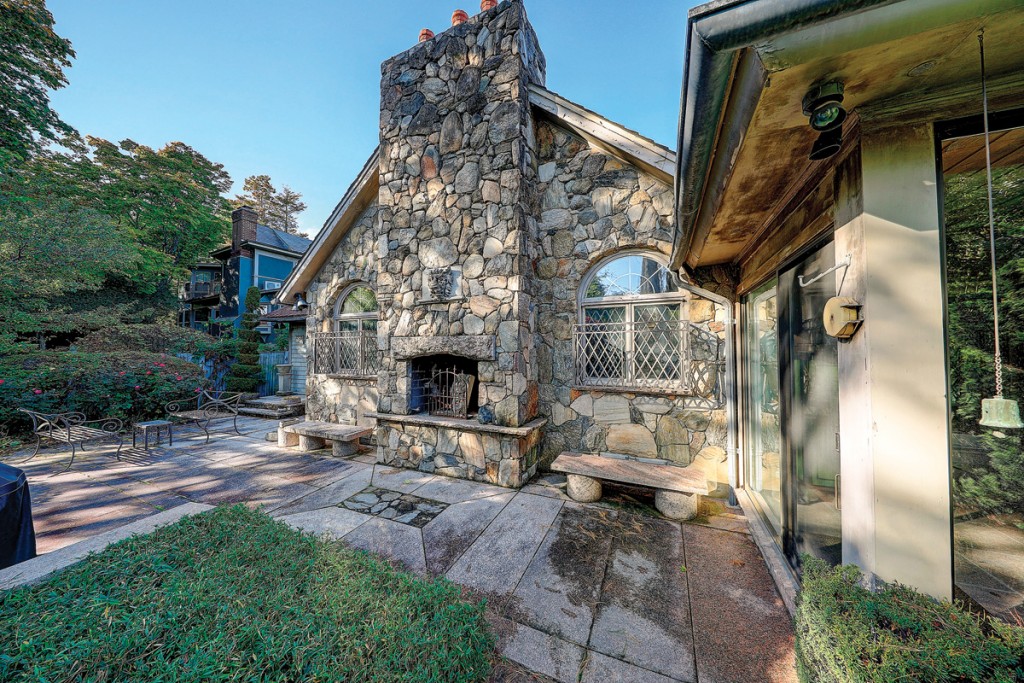 Once her house on Hazard Avenue was completed, Norma helped her daughters design their own homes — a process that, the sisters say, has helped them cope with the inevitable: selling their mother’s house following her death in 2016.

“It’s a house. What we lost was so much greater than that,” Maceroni says. “I’m heartbroken, but what are you going to do.”

In the fall, the family put the house on the market with Residential Properties for $1.095 million. It was under contract in one week. Everything happened so fast, Maceroni says, but Loomis wasn’t surprised someone fell for the place. Her mom was easy to love — stylish, smart, a Renaissance woman — and the house was her reflection in Venetian plaster, rough-sawn wood and stained glass.

“She just had an artistic eye,” Loomis says. 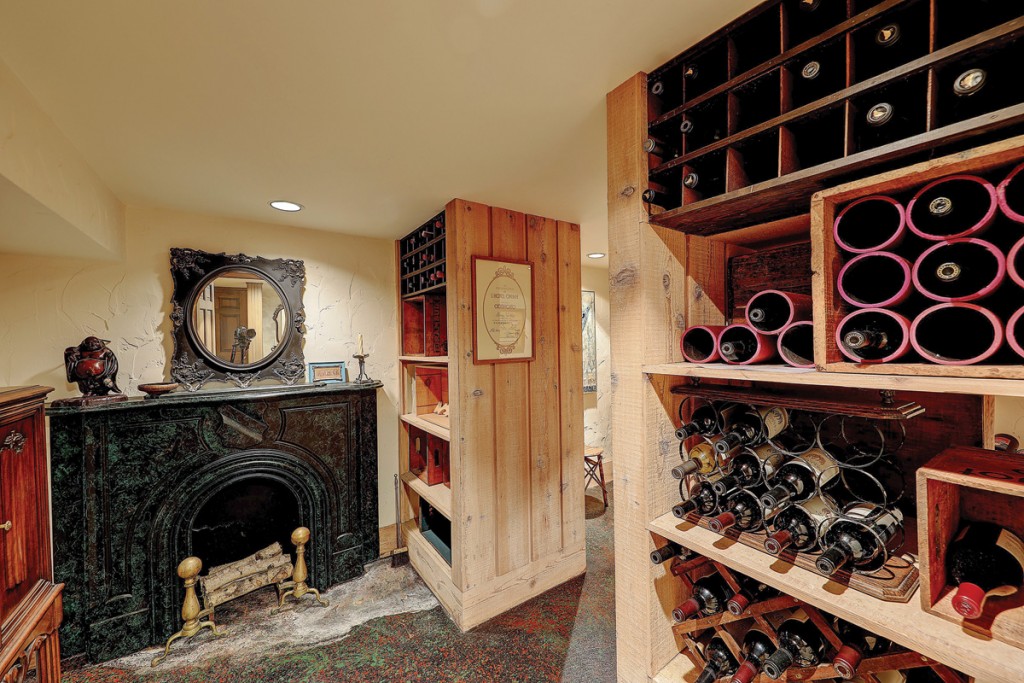