Inside a Sky-High Beach House in Bonnet Shores

Faced with building challenges, a couple builds up, up, up. 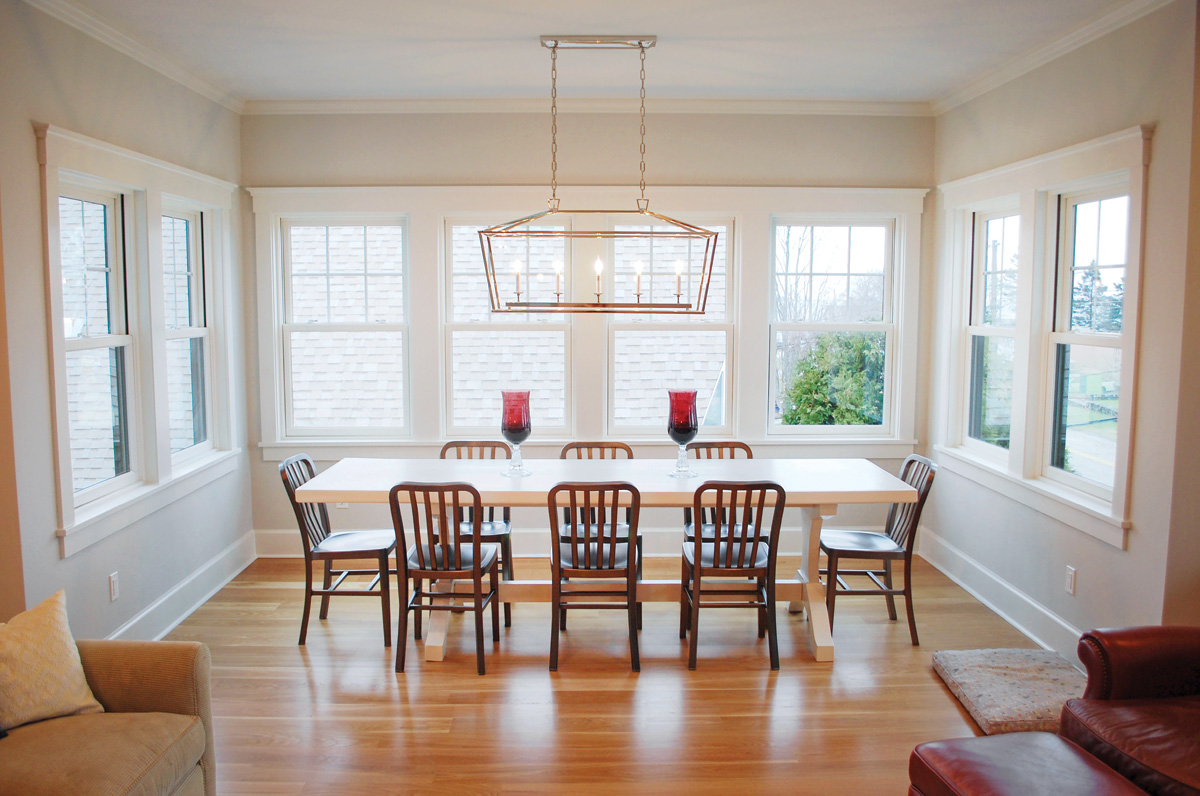 The nickel chandelier is by Visual Comfort; the red glass hurricanes are the homeowners’. Photography by Krista Hevenor.

Bright and Breezy
Living upside down has its advantages, especially when it comes with a shoreside address near Narragansett Bay and the Jamestown Bridge. Exhibit A: this modern shingle-style beach house in Bonnet Shores that started life in the 1940s as a small, two-story Cape.

“We have friends who’d been coming here for years, so we rented in 2016 to try it out. It was one of the best vacations we’ve ever had,” says owner Lynn Poling who, with her husband, Rod, put in an offer at an open house after just two weeks in Narragansett. “It was an impulse decision,” she admits. “If we were going to buy a house, we needed to see the water.” 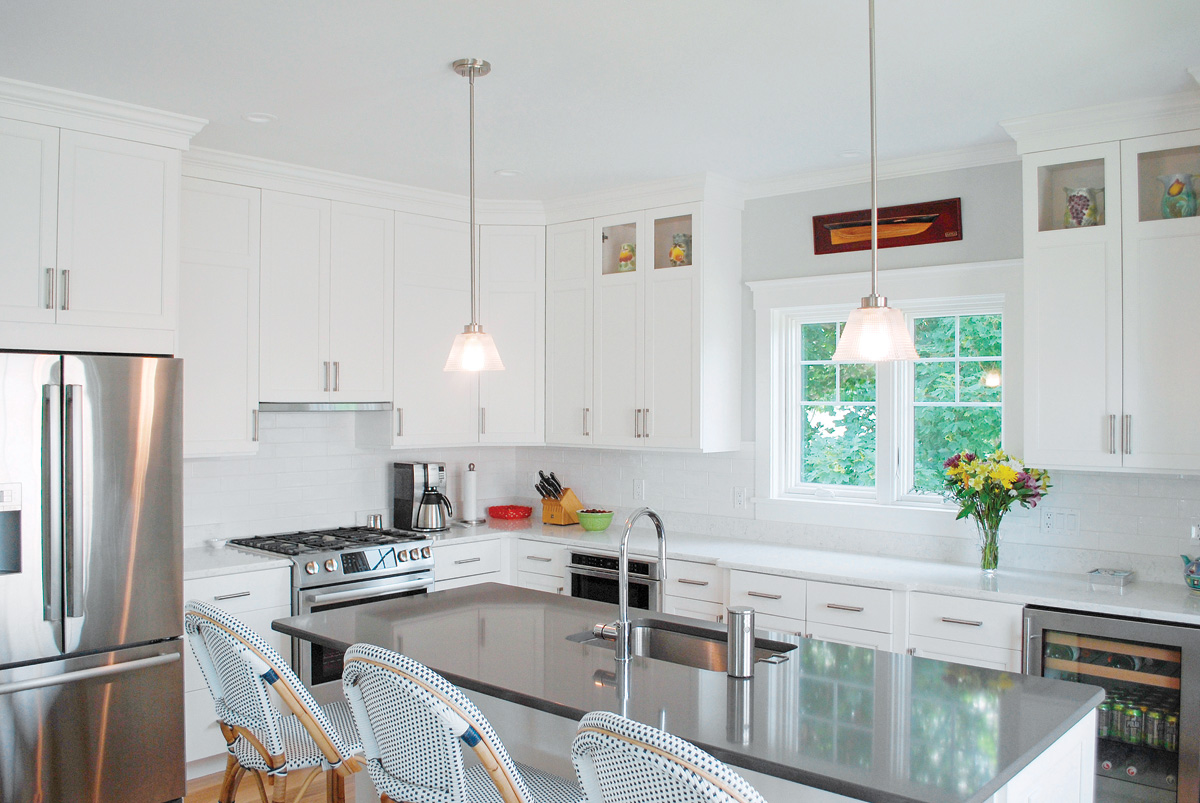 The gas range, dishwasher and refrigerator are by Bosch, and the beverage cooler is Uline. Cabinets are Cabico; chairs are Serena and Lily. Photography by Krista Hevenor.

The original goal was to enlarge and remodel the Cape’s existing 1,600 square feet, but site restrictions, including the size of the lot, meant the renovation had to stay within the original footprint. Another issue: A structural engineer discovered serious problems with the crumbling foundation. The optimal solution was to tear down and rebuild.

The final design was the result of brainstorming by the homeowners, as well as architect Lisa Carlisle and builder Jim Coughlin of Coughlin Brothers. It comes with picture-perfect vistas from the second-floor kitchen and living areas as well as the third-floor master suite. 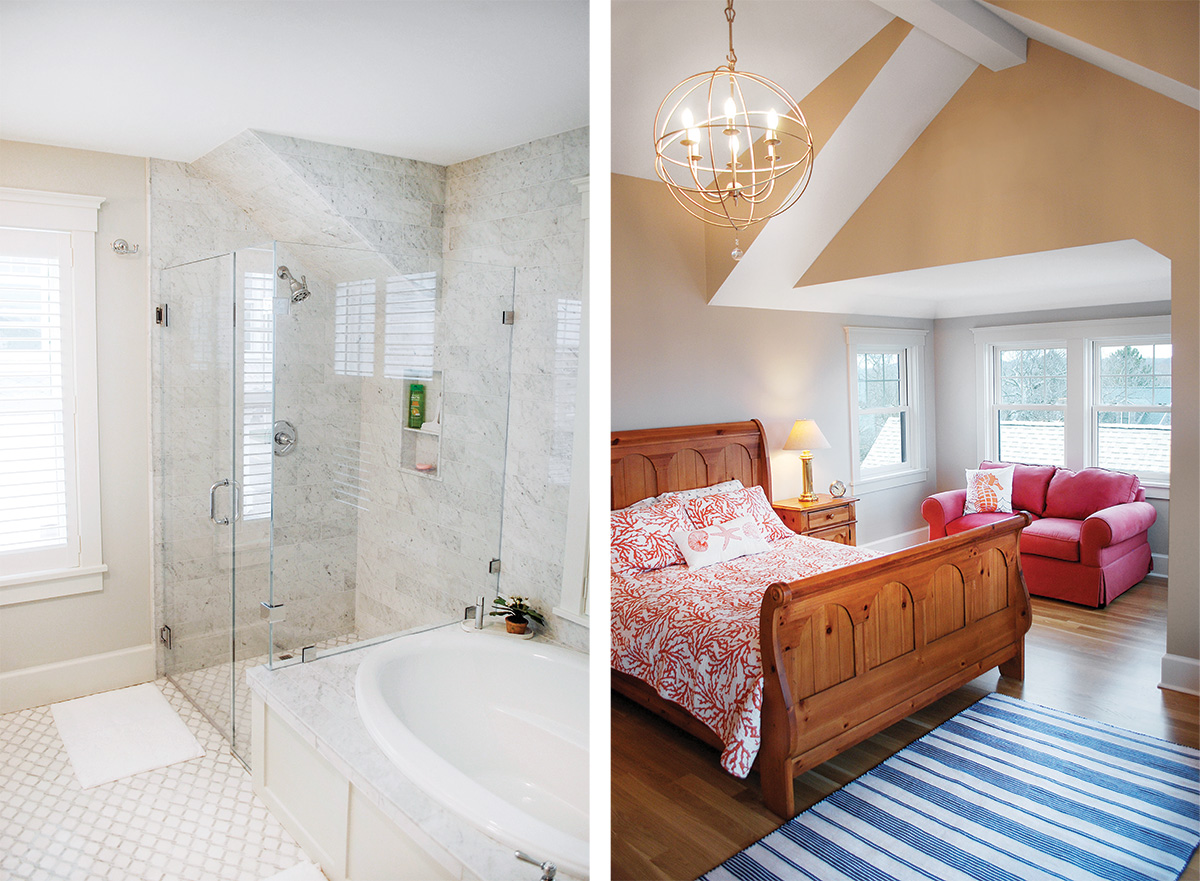 The pendant chandelier in the third-floor bedroom, along with others in the house, comes from Solaris by Crystorama. Photography by Krista Hevenor.

Off the Clock
The architect wanted to avoid a basic boxy look, so creating interesting features became an important design challenge. “I suggested that the Polings create an idea book on [the website] Houzz for inspiration,” says Carlisle. The front entrance portico, along with several covered and open decks that create shadows, and a generous number of well-positioned windows, add understated accents. The cupola, with its sailing ship, perches atop the garage and comes from Rod’s stash of weathered must-keeps. 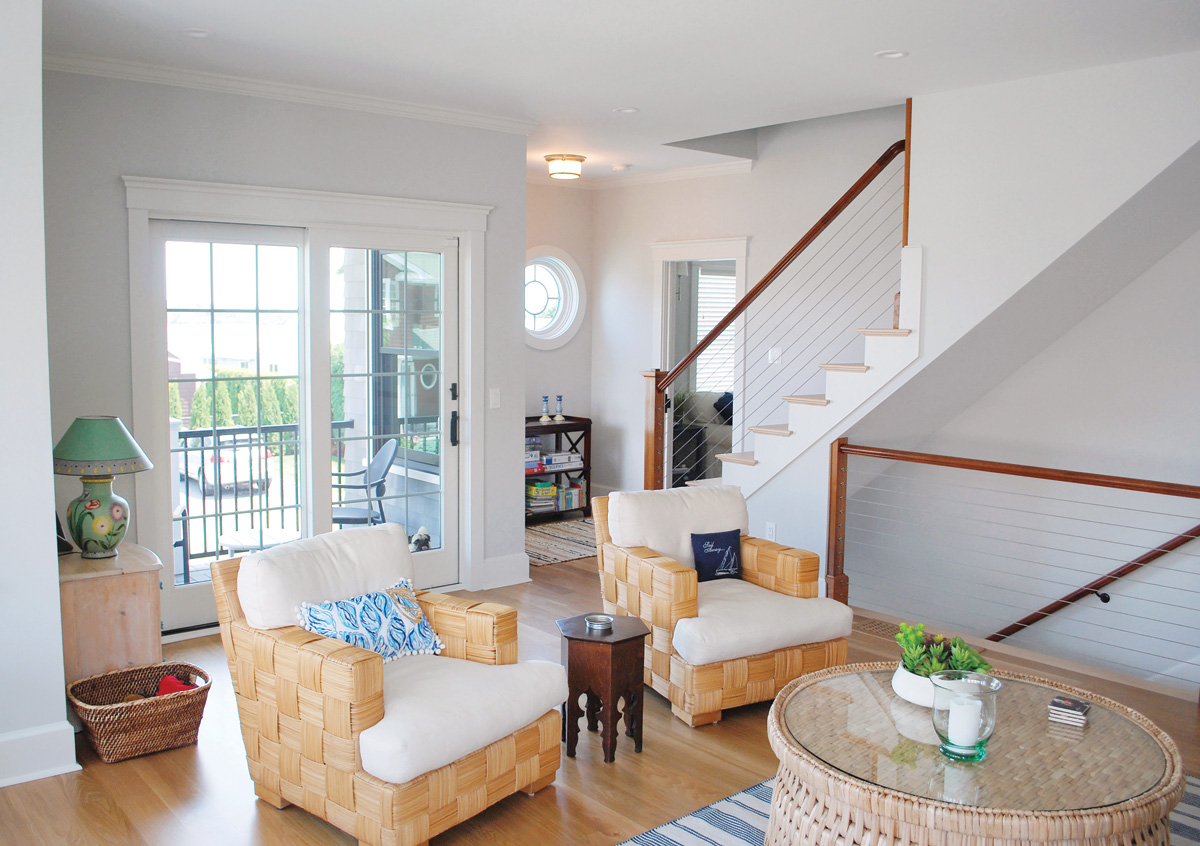 No one wants to spend valuable beach time doing laundry and house cleaning. There’s a washer/dryer on both the first and third floors, and the quartz counters in the second-floor kitchen are virtually indestructible, says Lynn. The easy living vibe extends to the spa-like master bath with Carrara marble and the dining area, with its roomy oak table that Rod fashioned out of pews from their former Massachusetts church. Of the Crate and Barrel chairs, Lynn says, “I wanted something the kids could sit on in wet bathing suits.” 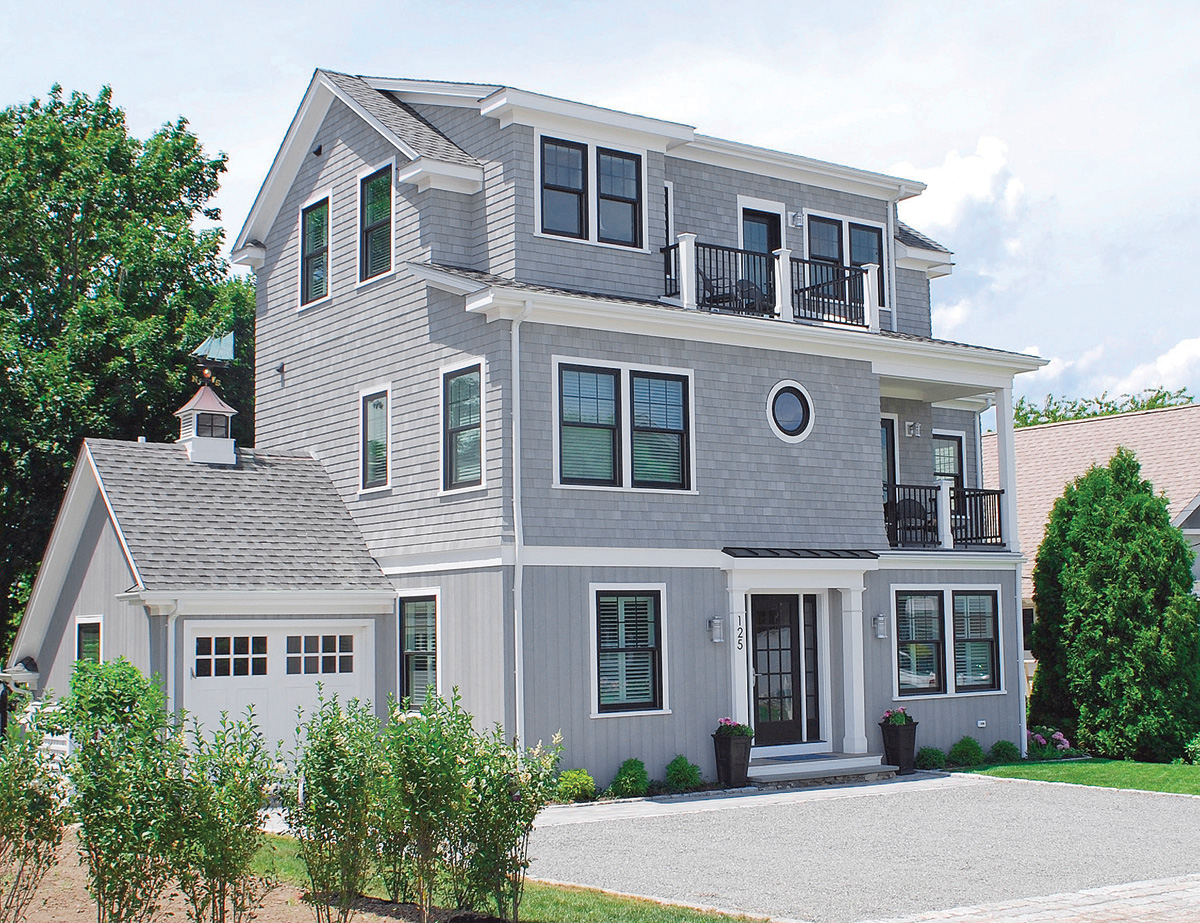 Vinyl exterior siding by NuCedar is maintenance-free and a builder’s favorite, says Lisa Carlisle of lisacarlislearchitect.com. Photography by Krista Hevenor.

Air Apparent
The airy living room opens onto the second-floor deck with those expansive water views and many of its furnishings are unexpected finds. Lynn discovered the 1970s Block Island rattan chairs at a home store in Florida. Rod rescued the six-sided, dark wood side table from a recycling center and old lumber that he’d saved became the flights of stairs and newel posts. Several of the bedrooms still had furniture when the couple closed on the property, including a sleigh bed on the third floor. Not letting anything to go to waste, Lynn scooped them all up. 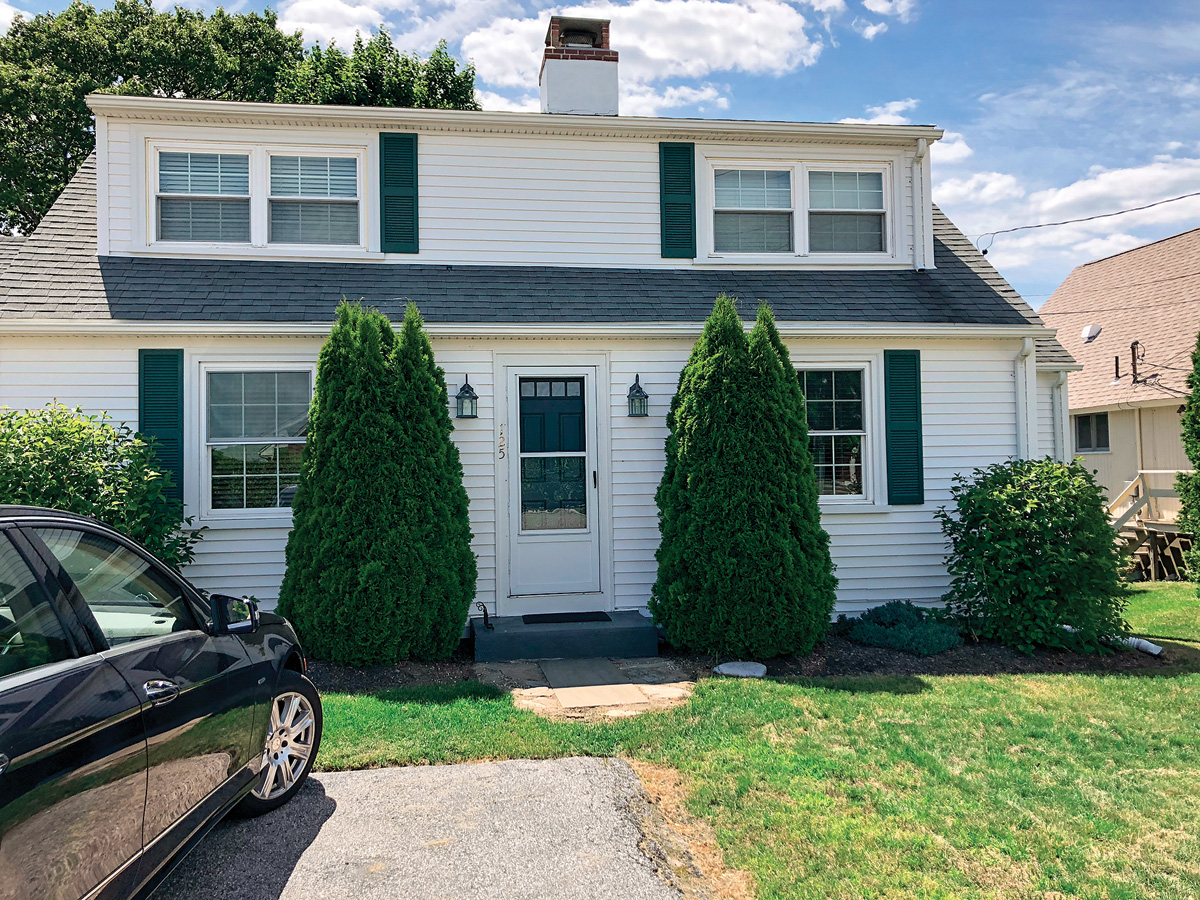 Construction on the new 3,400 square-foot house got underway in November 2018 and finished in October 2019. The modest Cape with its three bedrooms and one bath is now a comfortable five-bed, four-bath beach house for an extended family of eight, including three kids and three grandchildren. “We had Thanksgiving with our kids,” Lynn says. She and Rod also spent the warmer months there last summer. Unlike some house building projects that seem plagued with horror stories, this one was seamless. “There were no surprises,” Lynn says. “Everything came out beautifully.” In this Bonnet Shores case, living upside down has proved to be right side up after all.