This Hundred Acre Cove Home is Designed to Last

Two empty nesters built a home suited for their aging parents, their adult children and their own future.

The open kitchen and dining space is ample enough to accommodate large holiday gatherings. The kitchen features warm walnut cabinets and a gray glass backsplash. “We love that light,” says the homeowner of the sculptural Hubbardton Forge fixture over the dining table. Photography by Joe St. Pierre.

Forward Thinking
Washing dishes isn’t anyone’s idea of a good time, but in this kitchen, it’s not so bad. “Around 4 or 5 o’clock with the sun coming in, there’s a reflection in the glass tile of the water,” says the homeowner. “I stand at the kitchen sink, and I can see the water everywhere.”

The idyllic location is what ultimately pushed her and her husband to relocate here. With the last of their three children through college, the couple found themselves caring for her aging father in the empty nest where they had raised their kids. The traditional New England Colonial had been perfect when their family was young, but it was less than ideal for her father, whose mobility was limited. As much as they (and their children) liked the house they were in and felt nostalgic towards it, it wasn’t working for her dad and, looking ahead, it wouldn’t work for them as they aged.

“We were either going to renovate the house we were in or we were going to build a house that could better accommodate [my dad’s] needs,” she says. This property is what swayed them toward building rather than renovating. Perched on the eastern shore of Hundred Acre Cove in Barrington, the site gave them the opportunity to start over, to design a home on the water that would accommodate their family’s needs now and in the future.

Building from scratch means endless options, but endless options can be challenging to navigate. Etched starburst tile in a bathroom sits below a floating vanity; in the living room, a glass panel takes the place of a traditional baluster. Photography by Joe St. Pierre.

Design Priorities
Albert Garcia of KITE Architects designed the couple’s new home, which prioritizes accessibility on the first floor. “The idea was that eventually, when we couldn’t climb up the steps, we would be able to live on the first floor and have everything we needed,” says the homeowner. In addition to a master suite, the laundry room was also located downstairs. Maneuverability between spaces on the first level — bedroom to dining room to living room — was designed to be easy. There is no formal dining room, but the kitchen extends into the living space, which can readily accommodate whoever comes by for dinner.

Engineered Carlisle wide plank floors conceal a radiant heat system throughout the home. “It’s a beautiful thing on a bitter winter morning to step out onto a warm floor,” says the homeowner. The fireplace wall in the living room is finished in Oko Skin panels, a fiberglass reinforced concrete used on the house’s exterior, and the Carlisle flooring was used to finish the wall behind the television, two aesthetic choices that create continuity throughout the space.

“One of our children lives in LA, one lives in D.C. and one lives in Pawtucket, and our hope is that we create this little oasis that they’ll all want to come back to and spend some time,” says the homeowner. Photography by Joe St. Pierre.

Family Rooms
The homeowners say that when they told their children about the plan to sell their childhood home and build anew on the cove, their daughter was understandably a bit wistful. When she asked if she would have a room in the new house, the homeowners say they (half) jokingly replied: “There will be room for you, but you won’t have a room.”

Truly, though, family was always central to the plan. Garcia’s design incorporated three additional bedrooms on the second floor, one of which functions as a second master. A corner window in the second floor master bedroom maximizes the views from inside, and a large private balcony overlooking the cove allows for an even more immersive experience. The other two upstairs bedrooms share a balcony; a queen bed in one and two twins in the other ensure everyone has a place to sleep when they visit.

Garcia’s site plan situated all of the living spaces, bedrooms included, on the waterside of the house. “None of the windows facing the street are to a bedroom,” says the homeowner. “They’re into a hallway or closet to provide privacy.” 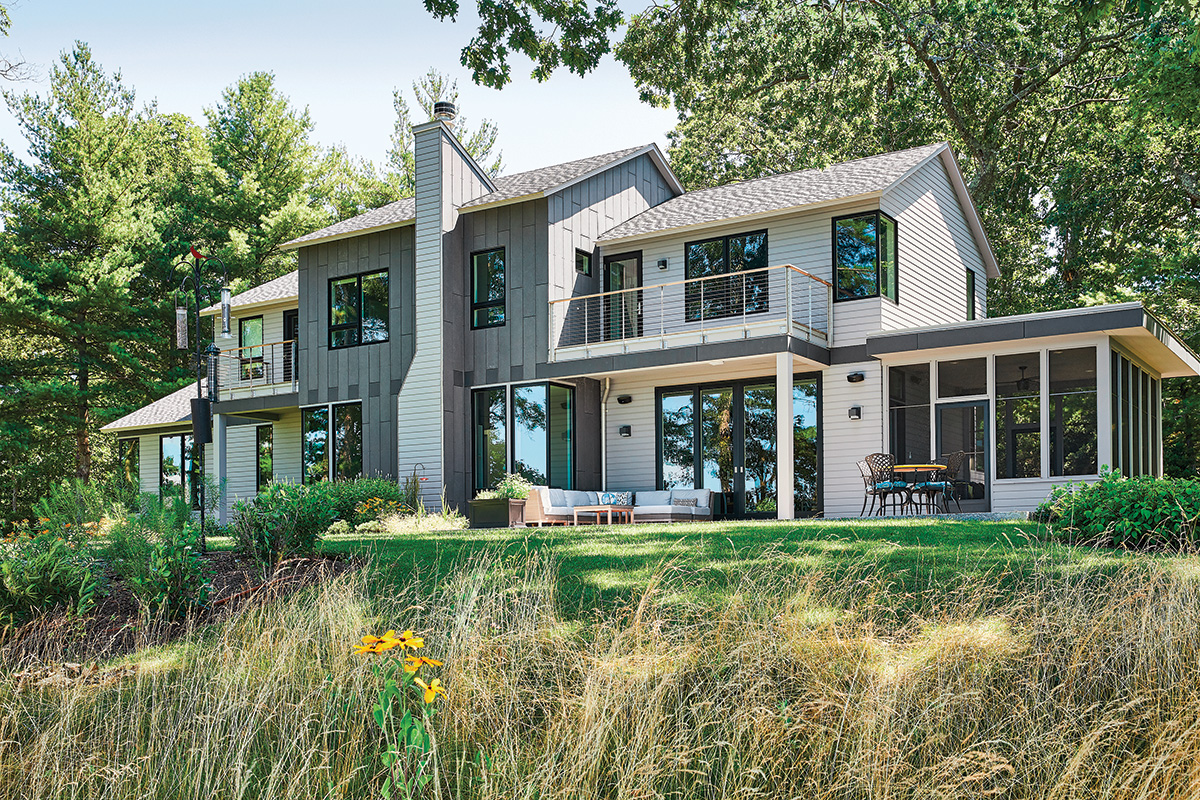 On the waterside, an outdoor patio and screened porch provide the owners with options for enjoying the scenery. Photography by Joe St. Pierre.

Greater Outdoors
The exterior, with its combination of wood lap siding and both smooth and rough textured Oko Skin, has modern appeal. Because minimizing exterior maintenance was also a priority, Oko Skin, which doesn’t require painting or sanding, was used as the outer layer of the home’s rain cladding system and the house was designed with a single gutter. (“I always hated cleaning out the gutters and my wife didn’t like me being up on the ladder anyway,” says the husband.)

When building on the water, there’s often an urge to clear any and all obstructions between the structure and the water that may hinder the views. That urge was not at play here; instead, the homeowners were eager to preserve the mature growth on the property. “We like how the trees frame the house when we’re looking out and shelter the house when we’re looking at it,” says the homeowner. 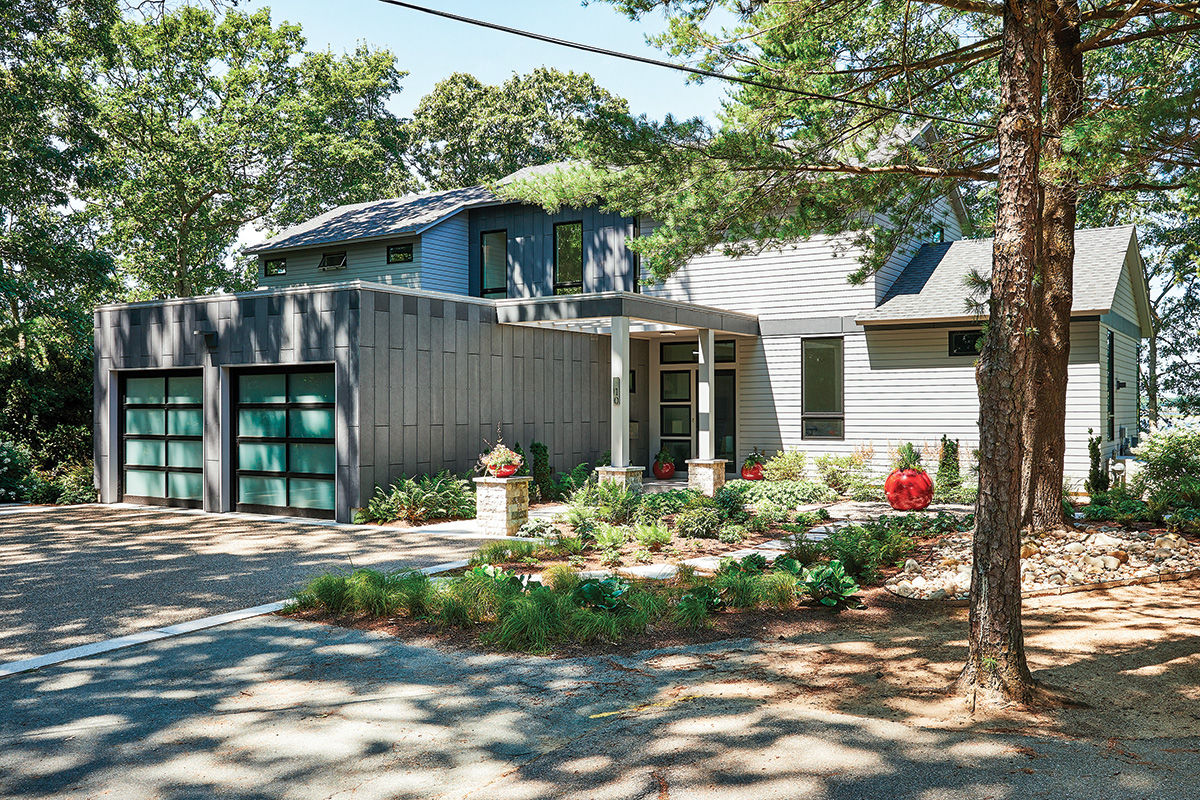 Windows on the street side are positioned to maximize privacy to interior living spaces. Photography by Joe St. Pierre.

“We’re really happy that it’s part of the environment,” adds his wife.

A large pine tree in front of the house inhibited what would grow on the street side, so rather than lawn, landscape architecture and construction firm, Magma, installed a series of beds with greenery and decorative grasses, rock gardens and planters.

“Instead of having to fight nature, we made alternative choices and we’re delighted with the outside.”