A guaranteed income pilot and other new programs have shown early success at offering Rhode Islanders living in poverty another shot. What happens when the money runs out? 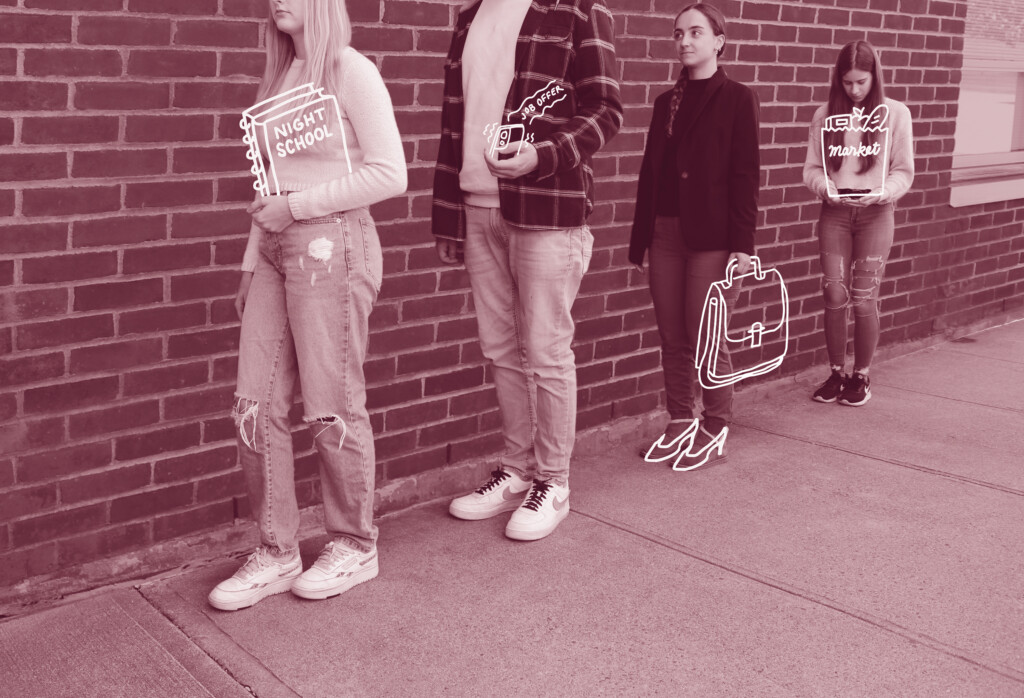 In September 2021, Lititia Hall got the call. She had been randomly selected to receive $500 a month — no strings attached, and irrespective of any other assistance programs — for a year.

“I couldn’t believe it. It was such a blessing,” she says.

It had been eight years since she completed her sentence at the Adult Correctional Institutions for a fraud conviction, and three years into her recovery from substance abuse. But she hadn’t completed high school, her felony record made it hard to find a decent job, and she staggered under nearly $10,000 in debt to the courts. In June 2021, she moved into new housing with an income-adjusted rent. She managed the day-to-day expenses on food stamps and picking up work here and there, hoping to make a decent home for her daughter, who was leaving foster care.

“It was a struggle,” she says.

In July 2021, Providence joined more than sixty other cities in an experiment to stabilize the lives of people living in extreme poverty by giving participants an unrestricted monthly stipend. In 2019, Michael Tubbs, mayor of Stockton, California, experimented with allotting $500 a month for two years to 125 people living in neighborhoods at or below the city’s median household income. A preliminary assessment found that the extra cash smoothed the income fluctuations that can devastate fragile budgets, allowing participants to find full-time jobs and improve physical and mental health. In 2020, Tubbs established Mayors for a Guaranteed Income to spread the word.

Today, 110 Providence residents with an income at or below 200 percent of the federal poverty level are receiving monthly $500 payments. Initially funded by philanthropy, the year-long pilot, which began in November 2021, was extended for another six months using American Rescue Plan Act monies. Hall used her months of regular income to get her first driver’s license at age forty-one, and to study for her GED diploma.

“I could go to school and not get stressed out by trying to work and study at the same time. I can pay my bills. I have groceries on the table and smiles on the faces of my children,” she says.

Mayor Jorge Elorza admits that at first, “I was skeptical,” he says. “What we’ve seen so far, for the most part, is that this program has changed people’s lives for the better. I can’t think of any other program that has had that kind of impact, that quickly, for this many people in a long time — or, frankly, ever.”

This program is just one of several initiatives to recognize and alleviate the disproportionate economic burdens borne by the poorest Rhode Islanders. In August, Elorza announced the Providence Eviction Defense program to provide low-income residents with legal services to prevent eviction. In September, he unveiled a program to pay off the fines that keep people from regaining their driving privileges. Both programs are funded by federal COVID relief.

RIPTA rider Diamond Madsen welcomed the help. The R-Line gets her to doctor’s appointments and to homeless shelters to drop off donations.

“I used to be homeless, so this is very serious to me,” she says.

This summer, the state judiciary, armed with new legislation, began a campaign to eliminate court costs, fees and assessments for indigent defendants, for defendants sentenced to serve thirty days or more on any count, and for any other defendant a judge deems appropriate for financial relief. The legislation was the culmination of a two-year exploration that began with R.I. Supreme Court Chief Justice Paul A. Suttell’s 2020 launch of a committee on racial and ethnic fairness in the courts. In nearly one year, the program wiped $1.6 million of court debt off the books.

“What was eye-opening to me was the level of distrust of the judicial system,” says Superior Court Associate Justice Luis Matos. “A few people said, ‘We committed this crime, judge so-and-so treated us fairly, I deserved whatever sentence I got, but I thought that when I was done with that, I was done.’ When judges look at cases, [fees are] really not a significant part of the equation. You are looking at sentences and probation and you think that’s how people perceive whether you were doling out justice in an equitable way. And you realize it’s something you don’t perceive, but it stays with people forever.”

Being poor is expensive. Unaddressed small problems — a minor car repair, a nagging cough, an unpaid court fee — become big problems — transmission failure, pneumonia, a bench warrant. No car, poor health and sideways with the law equals no work and no income, which equals unemployment and homelessness. Few who don’t live it understand how easily severe and cascading consequences can knock a poor family flat.

Hostility toward the poor in America has deep roots, and its intensity has ebbed and flowed on complex currents of racism, immigration, labor scarcity, religion and politics, pushing policy in two different directions. One persistent view is that the poor are the authors of their own troubles — lazy, immoral and only worthy of enough help to put them back in the labor force, if they are worth anything at all. The other view is that poverty is the result of environmental factors largely beyond the control of the impoverished — economic conditions, disparities in education, poor health and racism, to name a few.

By the 1970s, a combination of factors, including inflation and a backlash against the civil rights movement, coalesced into a philosophy and system of governance that favored “personal responsibility” over the use of tax dollars for social good, says Alice O’Connor, a University of California Santa Barbara history professor who studies poverty policy. The gradual result was, in part, the end of certain anti-poverty programs. States, starved of federal resources, began to criminalize poverty with  aggressive policing and the attendant court fines as a revenue source.

“These issues have been building up for a long time,” O’Connor says. The pandemic created an opening for “social experimentation that would not have been possible were it not for this atmosphere of crisis and need to act. I’m not going to say that we are at a sea change, but I do think we’re seeing some kind of recognition that those policies are not only morally wrong, but they are economically unsustainable and unsustainable if we are going to call ourselves a democracy.”

Longtime Rhode Island anti-poverty activist Linda Katz also identifies the Black Lives Matter movement as a catalyst “to move more investments” and spark “more discussion about the inequities and disparities in the health and economic well-being of Black and brown people that had been in existence for a very long time, but never received the attention they always deserved.”

What happens after these time-limited experiments run their course and the American Rescue Plan Act money runs out? There will be formal assessments of the guaranteed income program and RIPTA’s free-fare pilot, according to RIPTA and Providence officials.

Katz points to the state’s steady decline in support, from being an early adopter of the Earned Income Tax Credit of the 1980s, to the Family Independence Program of the 1990s, a national model that protected vulnerable children and gave their parents training and educational opportunities, to the Rhode Island Works program of 2008’s Great Recession, which repealed children’s entitlements to benefits, emphasized job-hunting and increased sanctions.

Today, Rhode Island has the lowest state EITC of New England states. The state stopped investing any general revenue funds in Rhode Island Works more than a decade ago. The program reaches fewer and fewer participants, and the Economic Progress Institute reports that very little of our $95 million federal welfare block grant is spent on the intended beneficiaries.

Hall can testify: “I want everyone to get a chance — it does work. It’s like a crutch, just helping you get up and put one foot in front of the other and be ready for the next steps.”