House Lust: An Eclectic East Side Mansard with a Massive Owners’ Apartment

The "Bernie house" is on the market.

We’re told, from a very young age, not to judge a book by its cover. But what about judging a house by the large handcrafted political sign affixed to its facade?

Since 2016, the homeowners of 61 Doyle Avenue on the East Side of Providence have boldly proclaimed their support for Bernie Sanders and universal health care for all. One can imagine the sign — or signs: a 2016 version and 2020 version — took a lot of effort, both in presentation and execution. The homeowners are clearly committed to the cause. 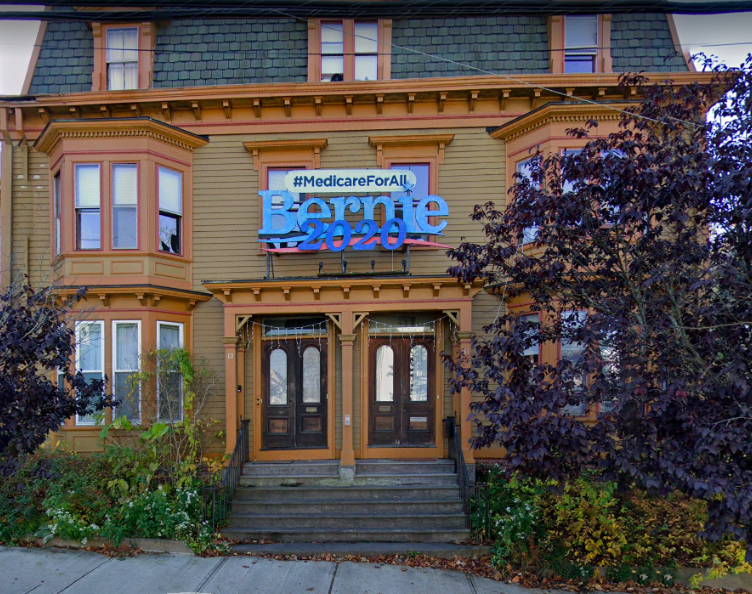 I’ve passed by this place hundreds of times over the years and wondered: What does the Bernie house look like on the inside? (Side note: Am I the only one who does this, or am I alone on my ledge of creepiness?)

Excuse the massive generalization, but this big, beautiful home — oh, I forgot to mention the home! Warm exterior colors, interesting mansard roofline punctuated by corbels, a foursome of bay windows — would not, could not, be bedecked with the trappings of capitalism. I imagined it’d be unique and artistic and a picture of sweat equity — the real kind, not the dolled up HGTV version.

Judgmental devil on my shoulder: You nailed it.

The East Side four-family, complete with a three-level owners’ unit, is on the market for $670,000. Residential Properties’ Rachael Dotson, who represents the sellers, says they debated about keeping the Bernie sign up but ultimately decided to take it down. It probably wouldn’t have hurt their prospects. The home has been on the market for two days and, after some showings on Wednesday, Dotson expects they’ll be reviewing competitive offers.

“I feel a responsibility to the market to at least show it to the market,” says Dotson in a phone interview on Monday, adding that she’s also heard from out-of-state investors with cash offers. “It’s not fair; normal people don’t have a shot.”

The price point feels low for a building of its size, with four apartments — including a three-level owners’ unit, another roomy unit spanning the entire third floor and two smaller units — spread across 6,203 square feet. The homeowners have tackled many remodeling projects, Dotson says, but the property is being sold “as-is” and the buyer will assume responsibility of installing a smoke system, per city regulations.

“But the updates are fantastic,” Dotson says. “Cosmetically, it’s in great shape.”

Dotson says her clients have lived in the owners’ unit for years. Both creatives, they also homeschooled their kids while plugging away at renovations. If only another young, creative family would invest in the city and call the Bernie house home. It might be a long shot, especially in this frenzied real estate market, but that’s the thing about judging a book by its cover: You might guess the story, but the ending can still surprise you.

For more information on 61 Doyle Ave., Providence, contact Residential Properties’ Rachael Dotson at 401-484-7015 or visit 61doyle.com. Got a minute (or forty) to lose? Check out the Matterport virtual walkthrough.

RELATED ARTICLES
House Lust: A Dreamy Mid-Century with a Private Lake on Pojac Point
8 Extraordinary RI Rentals Near Quiet Beaches and Hiking Trails
Save This Old House: A Former Wheelwright Shop with Waterfall Views for $250K