Hit Up the Burgundian for International Street Food, Liege Waffles and Sweets

The new Burgundian shop in Attleboro, Massachusetts, serves street food dishes and sweet and savory waffles for takeout on Thursdays through Saturdays. 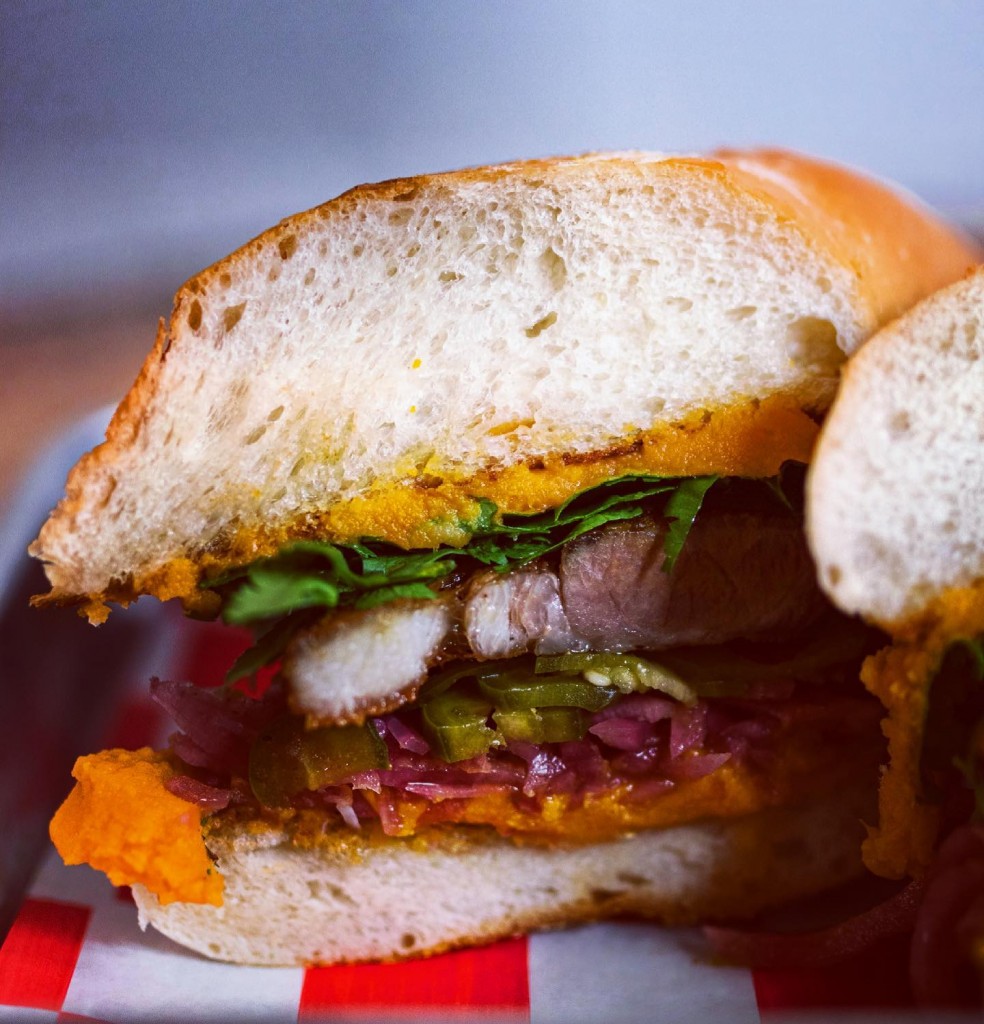 The Peruvian Pork Sandwich at Burgundian. Photo courtesy of the Burgundian.

Strike while the waffle iron is hot. The new bricks and mortar Burgundian shop in Attleboro, Massachusetts, is ready to serve all kinds of street-food-style dishes, and sweet and savory Liege waffles for takeout on Thursdays through Saturdays from 4 to 8 p.m. Owner Shane Matlock’s new storefront is celebrating two months in business with hopes of opening the dining room for service by Memorial Day weekend.

The Burgundian menu is focused on street food, which basically transforms some international dishes into sandwiches by placing them on grilled housemade brioche buns. Favorites include the Peruvian Pork Sandwich, which is a sammy stuffed with crispy pork belly, pickled red onions, Creole sauce, sweet potato mousse and pickled chilies; a Korean Jackfruit Sando with Korean barbecue jackfruit, spicy slaw and pineapple salsa; and the Katsu Fried Chicken Sando with panko-breaded fried chicken, pickled cucumbers, Tonkatsu sauce and shredded lettuce. Of course, you can also always get the ever-popular favorites, fried chicken and waffles, Maple Bacon Waffle and In Bacon We Must, a Liege waffle topped with bacon and whipped ricotta. There’s also the option to build your own waffle, or opt for a sweet version topped with raspberries; cinnamon and sugar; banana churro with bananas, cinnamon and sugar; a Tiramisu waffle soaked in coffee and Frangelico, and so many more options. If ramen, burgers or mac and cheese are more your style, they have elevated versions of those options, too. 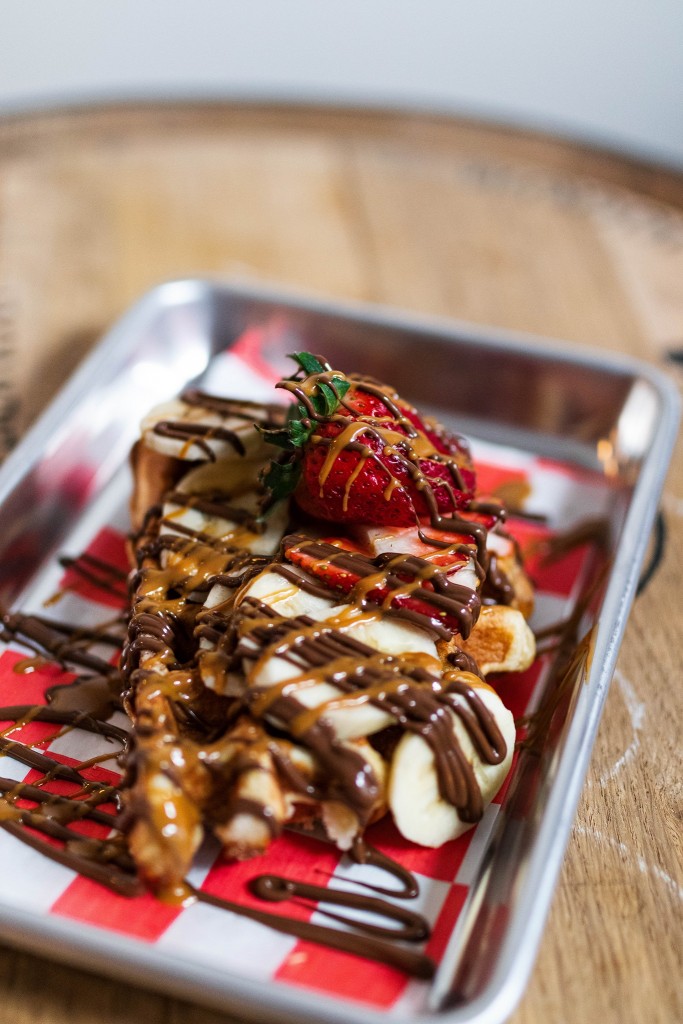 A dessert waffle at Burgundian.

Matlock hired chef Ollie Williams (previously from the East End, Sarto, Pat’s Pastured and other restaurants) to lead the kitchen. He’s also planning to up the shop’s coffee game by bringing on an experienced barista who will make specialty coffee drinks based on international favorites. The Burgundian will have a liquor license to serve craft beers, wine and cocktails that will pair well with the waffles once it opens for dining in. Matlock is excited to help contribute to the revitalization of downtown Attleboro with the opening of his shop as a cornerstone for the community.

“I live in Attleboro and I have seen the potential of the downtown. I have always dreamed about being an anchor or key to a revitalization, and Attleboro seems like a place that always has a lot going on,” Matlock says, adding that he sold his first waffle at the Attleboro Farmers Market and he sees lots of excitement around the farmers markets and the Food Truck Festival that is held at Capron Park. The town is a great base for his kitchen because of the convenient location between Boston and Providence. “Our food truck goes up to Boston, we’re all over the South Shore and all over Rhode Island, and Attleboro is right in the middle of it,” he says. 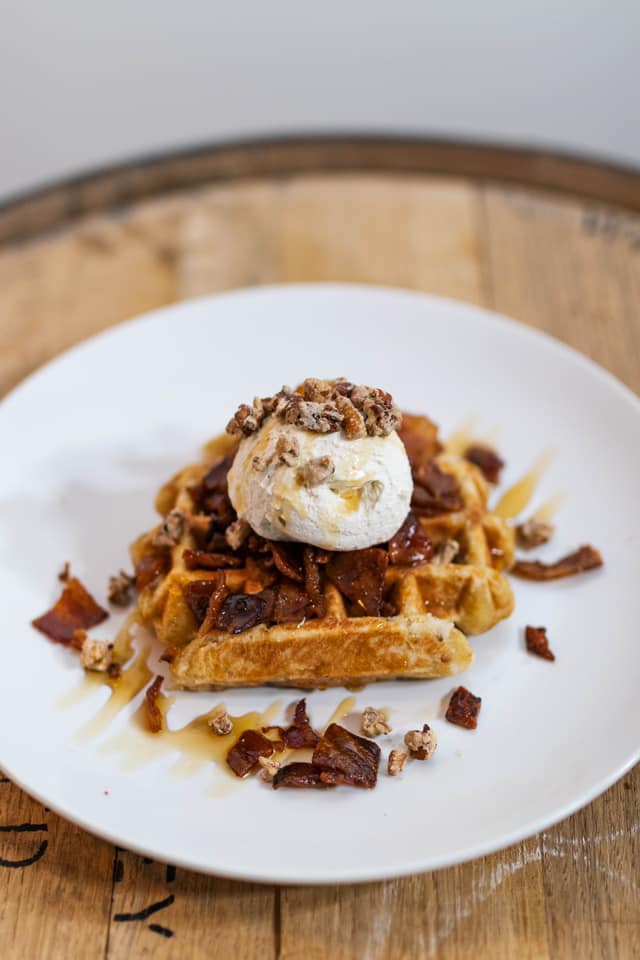 The Maple Bacon Waffle at Burgundian.

The neighborhood near the Burgundian shop includes the commuter rail station to Boston and Providence, and there are factory buildings being converted into apartments right behind the shop. Matlock views his cafe as a place where the community can come together. “A brick and mortar like a cafe has the ability to be the intersection of a city or region’s livelihood,” he says. “You have commuters in the morning, you have the moms and parents with kids, you have people coming in after the gym, there are people on dates and it’s a place for team meetings. I have always wanted to have a place like that.”

While the food truck and popup waffle business will continue to run catering events, the Burgundian cafe is a place where the “Burgundian” lifestyle can live out its mission. He’s recently rebranded Burgundian to be more of a concept rather than just waffles. “I never set out to be ‘Burgundian equals waffles’ as much as I wanted to promote ‘Burgundian’ as a lifestyle of eating, drinking and sharing life with people around you,” Matlock says. “Having been so well traveled and loving so many different foods from around the world, I said let’s take the idea of what we’ve done and expand on it. We perfected a popular street food from Belgium, and now we’re pulling in other types of street foods from around the world and bringing it all together on our menu.”

Every month might promote a different theme, for example, April will focus on Caribbean-inspired menu items. “It’s a great way for me and our chef to have a creative outlet and bring these things together,” he says. “Creating that foundation for a concept allows us to do whatever we want and get excited about it without being beholden to one style of food.”

The Burgundian food truck also has non-waffle selections available like fried,mozzarella-stuffed arancini balls with Bomba sauce and Belgian fries. They’ve been marketing build-your-own waffle kits and selling pre-cooked frozen waffles. Soon they’ll start shipping those frozen waffles around the area and offer them for sale at local retail shops. “We hope to see them in stores here in the next year, which I never thought as something I would do. Covid really forced us to adapt,” Matlock says. “You gotta be in survival mode.”

5 Places for Freshly Made Waffles