Seals have been visiting for decades, but scientists say there are still mysteries about these intriguing winter guests.

That student, Austin Costa, is working with Roger Williams biology professor Paul Webb, whose students have been studying seals in the bay for more than a decade. Webb calls harbor seals “fat sea dogs” because they “look a lot like fat dogs in a lot of ways, and they show a lot of the same kind of social behavior.” Their big eyes and dog-like faces have made harbor seals especially popular among wildlife watchers and spawned weekly sold-out seal tours from Newport Harbor sponsored by Save The Bay.

Webb says that harbor seals are notoriously difficult to study because they don’t come to shore where they could be captured for health studies or have tracking devices placed on them.

“They’re a protected species, and it’s logistically difficult to get your hands on one. So most of what I’ve been doing is behavioral studies and population counts,” he says. “I’ve had students looking at vocal behavior and vigilance behavior — when you have a big group, do they spend more or less time looking around for predators? The bigger the group, theoretically, the less time each one has to spend paying attention.”

Since most studies of harbor seals have been conducted at haul-out sites during the day, Webb had a student observe seals at a site at Prudence Island in the middle of the night to see if the same number of seals haul-out after dark as in daylight. The student also investigated whether the animals vocalize more or less at night. In both cases, her results were similar to daytime observations.

“There are still a lot of fundamental questions we have about harbor seals,” Webb says. “We still don’t really know what their diet is in the bay. They’re generalists, so we assume they eat the same things they eat elsewhere. But we don’t know how much feeding is happening in the bay or if they’re going offshore to feed.

“It would also be good to know who these seals are,” he adds. “Is it the same group that comes back year after year, or is there a lot of interchange? Do those that haul out at Rome Point stay at Rome Point or do they move around the bay? To find out, we’d need a photo ID or some kind of satellite or radio tracking, and there are logistical challenges to those.” 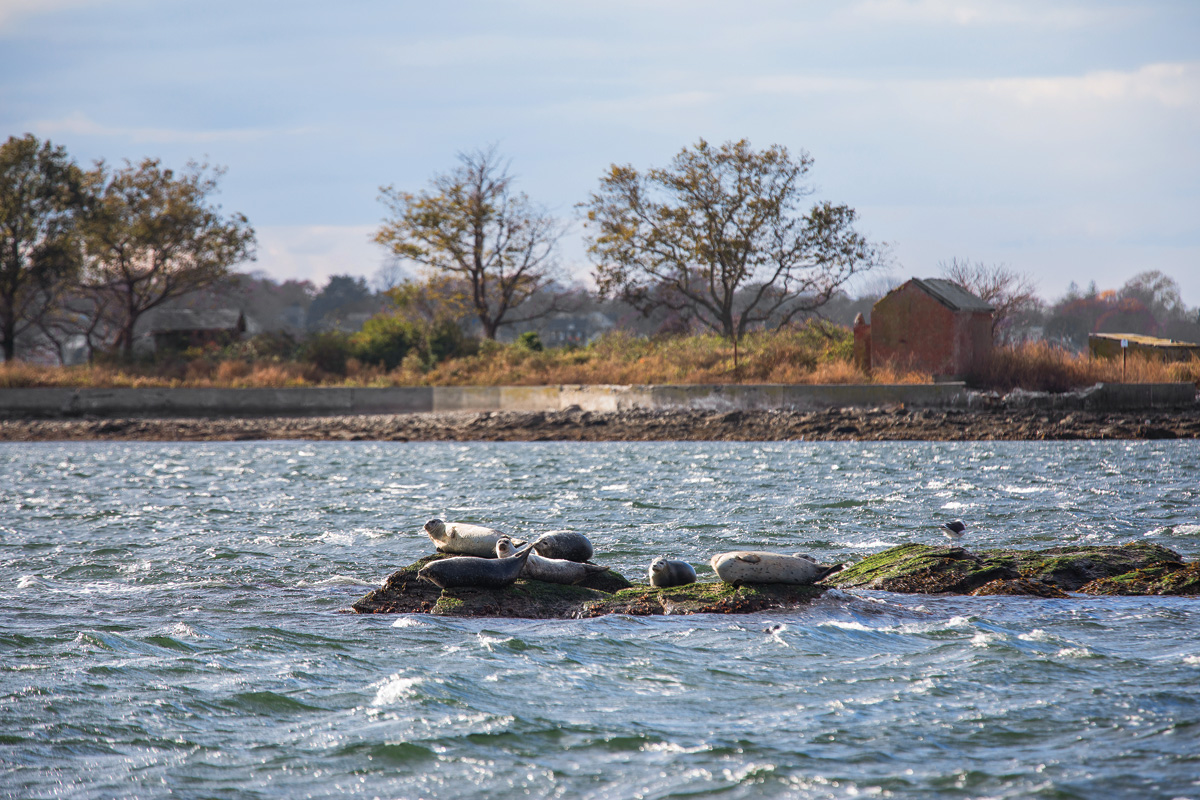 Seals observed at a favorite hauling out spot during a Save The Bay tour. Photography by James Jones.

Webb believes that most of the harbor seals wintering in Narragansett Bay are younger animals that have not yet begun to breed. Perhaps they come to Rhode Island to avoid competition with adult seals, he suggests. Or maybe young seals are less able to cope with the colder waters to the north.

For Webb, who studied elephant seals in California as a graduate student, the most interesting thing about harbor seals is their adaptability to live in a wide variety of locations and conditions and their remarkable physiological adaptations for thriving in the marine environment.

“Their diving ability and fasting ability are amazing,” he says. “Females fast while they’re lactating and live off their fat reserves, which allows them to separate their breeding grounds and their feeding grounds. That way they can concentrate on nursing their pup without having to do so in an area that has a lot of food resources.

“They also have a huge amount of blood. Pound for pound they can store three times as much oxygen as humans. When they dive, their metabolism shuts way down. They have a huge fuel tank, and they burn through it really slowly,” Webb says.

the seal situation on Block Island is somewhat different from that in Narragansett Bay. According to Scott Comings, associate director of the Rhode Island office of the Nature Conservancy, approximately 130 to 150 harbor seals spend the winter in the waters around Block Island and at several prominent haul-out locations at low tide. In collaboration with Kenney and Schroeder, he conducted a study of seals on the island from 2002 to 2006, and he doesn’t believe the numbers have changed much since then. He still sees seals of all sizes and ages lounging on the rocks at Cormorant Cove and Pebble Beach in winter, and it’s not uncommon to find thirty or more harbor seals napping and “making a godawful mess” on the floating docks at Cormorant Cove.

But harbor seals aren’t the only seals that find Block Island to their liking. An increasing number of gray seals — much larger than harbor seals, sometimes reaching ten feet long and 750 pounds — have been showing up around the island in late winter. Beginning about five years ago, small numbers even spent the summer breeding season at Sandy Point on the north end of the island, and last year more than 100 summered there.

“What we may be seeing is a range expansion,” says Comings, noting that recent estimates indicate there may be as many as 50,000 gray seals living year-round in the waters off Cape Cod, where their pups attract great white sharks in summer. “There is ample evidence that they are on a significant upswing and colonizing new areas. And why wouldn’t they colonize Sandy Point? Whether they’re going to start pupping or not, I can’t say. That’s still to be seen. But it seems like we’re trending toward an established colony.” 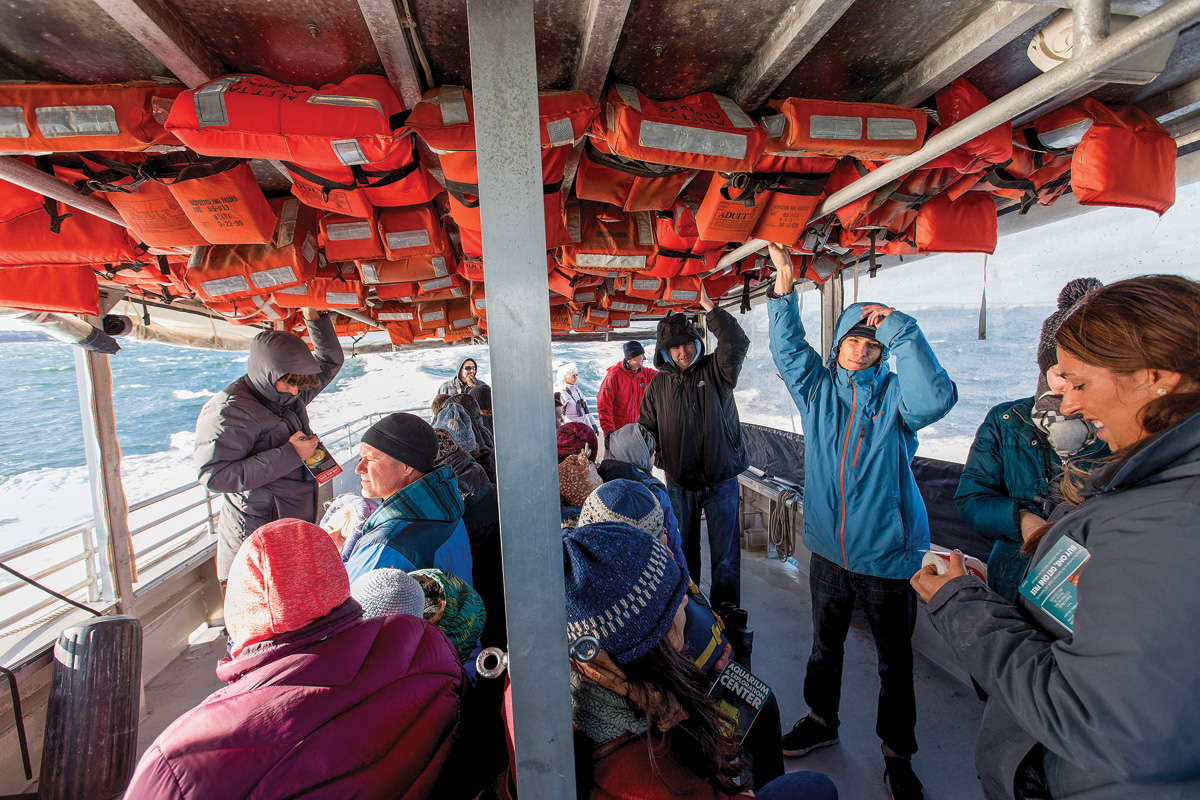 Save The Bay holds seal tours from November through April. Photography by James Jones.

Small numbers of gray seals have occasionally been observed in Rhode Island Sound for many years, and infrequently one may even wander into lower Narragansett Bay. But there are no records of them giving birth in the state, and nowhere but Block Island have they been seen in the numbers Comings has observed.

Despite the increasing number of sharks attracted by the gray seals on Cape Cod — and last year’s fatal shark attack there — Comings does not foresee a similar concern on Block Island.

“The place where we see gray seals here is not a swimming beach. It’s got a strong rip current,” he says. “If this was happening at Crescent Beach, the main beach in town, that would be a different story. But Sandy Point does not attract a lot of people.”

According to Kenney, the increase in gray seals in Rhode Island waters may signal an approaching decline in the number of harbor seals in the region. While New England has experienced slow growth in harbor seal numbers for many years, the most recent estimate showed a slight decrease.

“The reason might be that gray seals are taking over at a lot of the haul-out areas,” he says. “The Massachusetts gray seal counts are growing, and they’re expanding up in Maine, too. It could be that the north point of Block Island might be their next pupping location.”

Harbor seals in the region may also be declining due to an unidentified disease that has killed more than 1,300 animals in Maine, New Hampshire and northern Massachusetts since last summer — something federal wildlife officials are calling an “unusual mortality event.” The disease has not yet been found in any of the seals that winter in Rhode Island.

In addition to harbor seals and gray seals, Comings also reports occasionally seeing two species of Arctic seals around Block Island, both of which infrequently show up on or near south-facing beaches on the mainland, too. Harp seals are observed a few times each year at Block Island, usually one-year-olds that have just made it through their first winter. And hooded seal pups, which Kenney calls “champion wanderers,” make an appearance on the island occasionally.

“I don’t know why the hooded seals come here; they’re just on a walkabout,” Comings says. “Harp seals are used to eating ice, and sometimes on the beach here they eat rocks instead, which is a sign of a problem. But they’re not all sick when they get here.”

a mile-long path at the John H. Chafee Nature Preserve in North Kingstown leads to Rome Point, the best-known site for observing harbor seals in Rhode Island. As many as 170 seals have been recorded there at one time. It even has its own website dedicated to informing visitors how and when to observe the animals (romepointseals.org). On a visit to the point at low tide in late October, Kenney finds that the dozen or more exposed rocks 300 to 400 yards offshore are scattered with sleeping harbor seals, most appearing speckled, though a few darker animals indicate they have only recently emerged from the water and are still wet.

Scanning the group with a spotting scope, he counts thirty seals — typical for early in the season — seventeen of which were lounging on top of each other in a disorganized mass of blubber and flippers. It is impossible to tell if the animals are juveniles or adults, since pups resemble their parents at birth. None look injured, malnourished or entangled in fishing gear.

“As far as we know, they just haul out to rest,” Kenney says. “In the winter when the air is colder than the water, they still haul out, so it’s not about getting out of the cold water. They’re so well insulated that temperature makes little difference to them.”

Mirroring many of the same issues noted by Webb, Kenney ponders the questions still to be answered about Rhode Island’s harbor seal population, from diet and movement patterns to the conditions most conducive to hauling out. “There are a lot of what-ifs about this population,” he says. “But it’s not a population that anyone is particularly concerned about.”

After another look through the scope, he sounds incredulous: “It’s hard to believe that 170 seals would fit on those rocks,” he says. But he doesn’t doubt the record count from the 1990s.

What he does wonder is whether the Narragansett Bay harbor seal population can grow any more or if it has reached the limit that the habitat can sustain.

“It might be at carrying capacity,” Kenney says. “There is only so much space on a rock like that.”