Where Does Rhode Island Stand in the Gun Control Debate?

With impassioned advocates on both sides, the legislative tug-of-war starts afresh next month.

Theresa Moretti spent the morning of December 14, 2012, Christmas shopping. She snagged a red sweater for her grandson, Jake, at Macy’s and a white one for the youngest, Dylan, affectionately known as “Mr. D.” White might be an unusual choice for a six-year-old boy, but Moretti thought it would set off his dark hair and blue eyes perfectly; he would be so handsome.

He only wore it once.

Moretti spent the afternoon of December 14, 2012, in a tense vigil by the phone. Adam Lanza, a young man with a chip on his shoulder and an arsenal, had rampaged through Dylan Hockley’s elementary school in Newtown, Connecticut, killing his mother, twenty children at the school where she had worked, six women who tried to protect them, and himself. The Morettis had seen parents collecting their traumatized children from Sandy Hook on television, but there had been no word about her grandson. At about 3 p.m., her son-in-law called to relay the shattering news.

Dylan was laid out in his new white sweater. And Theresa Moretti was sure that America would join her in her grief and anger. A Cranston resident, she expected to hear from her mayor, her state representative, perhaps the Speaker of the House, who hailed from her city. She did not. She thought policymakers would rush to pass bills to stem gun violence. They did not. 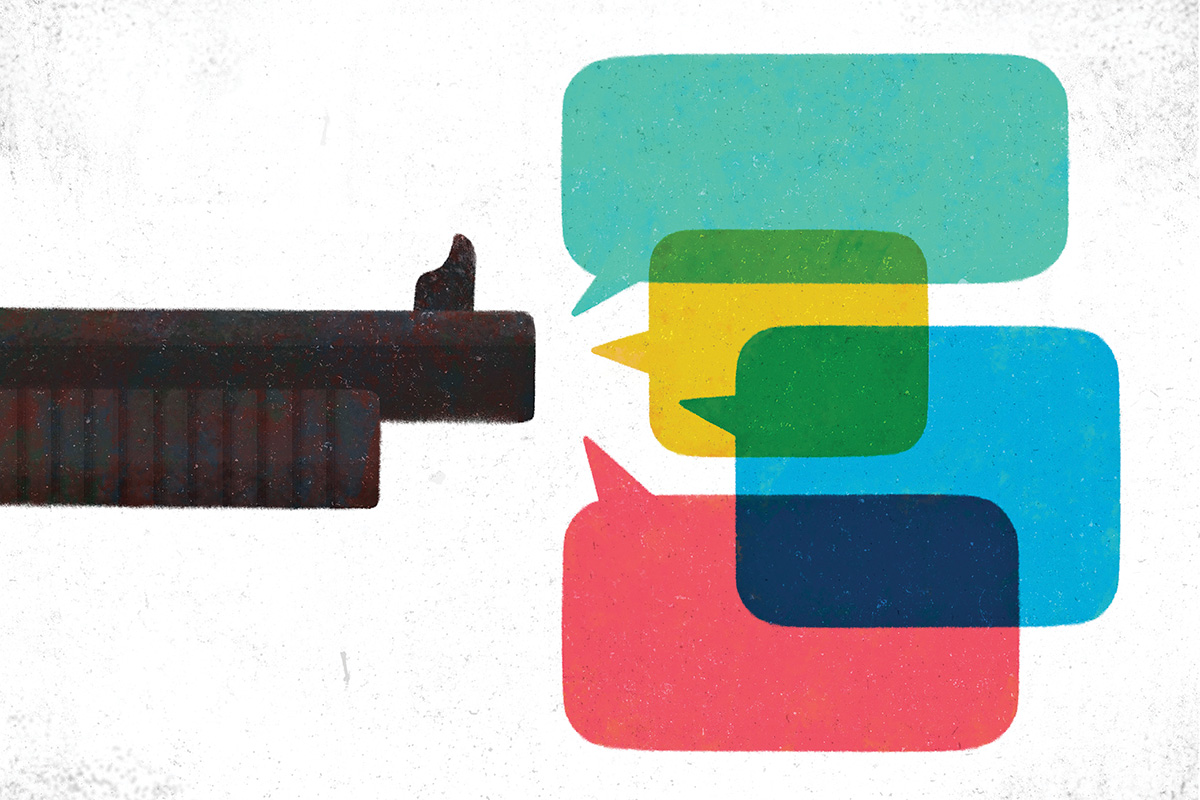 “I thought that people would be so horrified that twenty babies and six brave women were murdered, that they would say ‘Oh my God, we have to do something so that it never happens again,’ ” she says. “That was seven years ago.”

The tug-of-war between gun rights and gun control advocates will begin anew as the General Assembly returns to Smith Hill next month. Each side has its wish list.

Gun rights advocates want Rhode Island to seek reciprocity for concealed carry permit holders in other states, so they can legally do so over state lines. Frank Saccoccio, president of the RI Second Amendment Coalition, would also like to see legislation that clarifies the municipal standards on granting or denying gun permits and establishes an appeal process at the Superior Court level, instead of the current path to the state Supreme Court — prohibitively expensive for most people. Finally, the group is pushing “real safety solutions for schools” in the form of armed guards, bulletproof glass and metal detectors.

The Rhode Island Coalition Against Gun Violence’s (RICAVG) to-dos include a repeal of the provision that allows concealed carry permit holders to bring their weapons on school property; a ban on semi-automatic assault rifles and high-capacity magazines; and a ban on the production of 3-D guns — a bill that passed the Senate last session but languished in the House.

Will anything move this session, or will 2020 be another year of emotional confrontations in the hearing rooms and bills held for further study?

House Speaker Nicholas Mattiello and Senate President Dominic Ruggiero issued a joint statement to Rhode Island Monthly: “Any legislation introduced in the new session will be reviewed and the public will have the opportunity to offer testimony. Several measures have been enacted in recent years, making Rhode Island’s gun control laws among the strongest in the country.”

They point to Rhode Island’s consistent place near the top of state rankings for the strength of its gun laws and for its low rates of gun death. For example, in 2018, Guns and Ammo magazine rated Rhode Island as the seventh worst state for gun owners. The Giffords Law Center to Prevent Gun Violence listed Rhode Island’s gun laws as the nation’s ninth-strongest, with the fourth-lowest gun death rates, giving the state a B-plus rating.

In the year after the Sandy Hook massacre, every state passed gun-related legislation. According to a New York Times analysis, 109 bills became law. Two-thirds loosened gun restrictions. Rhode Island, on the other hand, made it illegal to receive, transport or possess a firearm with its identification altered or obliterated, and convened a task force to examine gun laws in relationship to behavioral health issues.

So far, state legislation has proved a poor shield. In 2017, 39,773 Americans died from guns — nearly two thirds by suicide. United States gun murder and suicide rates today are actually lower than in the mid-1970s, due to population growth. Nonetheless the death toll continues to rise; 2017 had the highest number of gun deaths in nearly half a century. That same year, the Small Arms Survey, conducted by a Swiss research institute, estimated that United States civilians possessed 393,347,000 guns — that’s more guns than people. (The non-partisan Pew Center for Research estimated that Rhode Island has the second-lowest percentage of gun ownership in the nation, at 5.8 percent.)

“The big problem in the U.S. is that guns and climate change have become part of the culture wars. Each side has hunkered down into its tribe, and it’s very sad,” says David Hemenway, a Harvard epidemiologist who studies gun deaths and injuries.

Public mass shootings, while far rarer, provide the jolt to the system that sometimes moves policy. From 2013 to 2017, 281 individuals were killed in such incidents. Among them was the February 2017 Parkland, Florida, incident — another school shooting with seventeen fatalities and seventeen injuries. In October 2018, a gunman on the thirty-second floor of a Las Vegas hotel killed fifty-eight concertgoers and wounded 422 — the deadliest mass shooting in recent U.S. history.

In response, the last three General Assembly sessions saw the passage of several new gun laws in Rhode Island: a 2017 law to take guns away from domestic abusers; in 2018, “red flag” legislation that enables police and the courts to take guns from those deemed a danger to themselves and others; and a ban on “bump stocks,” which turn guns into automatic weapons. (The latter was also a federal law.)

To gun rights activists, each new regulation feels like a slip down the slope toward confiscation.

“I absolutely believe without a doubt that I should have the right to have the exact same firearms as the police and military use — except fully automatic weapons,” the Second Amendment Coalition’s Saccoccio says. “It’s for the protection of individuals.”

Burrillville Town Councilman Donald Fox became so alarmed at some of the proposals, he started the Second Amendment “sanctuary city” movement, a resolution stating that the local police will use discretion when “enforcing laws impacting the rights of citizens under the second amendment” and that the municipality will not appropriate funds to store weapons confiscated under any state law “that unconstitutionally infringes” upon citizens’ rights “to keep and bear arms.” As of October, ten towns had passed a version of it.
“My goal was to make a statement,” he says. “And it shows the frustration that many communities have with Smith Hill’s unfunded mandates and it runs against what the majority in those towns feels is important.”

To their opponents, each year a floor vote is denied ends another exhausting effort to scale the twin peaks of the General Assembly leadership, both of whom have A-plus ratings from the National Rifle Association and accept thousands in donations from gun rights political action committees. They point to the legislature’s cool reception to the recommendations of Governor Gina Raimondo’s Gun Safety Working Group — forty-three health care, law enforcement, government, legal, education and other professionals convened to develop recommendations to counteract gun violence. In addition to some of the measures favored by RICAGV, the group suggested better data collection; raising the age of purchase or possession of long guns to twenty-one, with some exceptions; better access to mental health treatment; and red flag law training for police officers.

“There’s a very strong gun lobby,” says Linda Finn, a former legislator and RICAGV executive director. “We calculated the money the gun lobby has spent since 2013; it’s over three quarters of a million dollars. The other big issue is [former House Speaker] Bill Murphy. He was hired right after Sandy Hook by the NRA, and he’s the one who turned Mattiello against any sort of strong gun laws.”

State Senator Josh Miller (D-Cranston) says the leadership will eventually have to catch up to public sentiment or face electoral challenges from candidates who better reflect their constituents’ views. A 2016 public opinion poll sponsored by RICAGV showed that 83 percent favored restricting guns on school grounds and 75 percent supported a high-capacity magazine ban.

Even some gun enthusiasts support gun control. Christie Smith, sixty-nine, of Newport, grew up with guns and has enjoyed skeet shooting most of her life. Two years ago, she quit the Newport Gun Club over the requirement that she join the NRA.

“It just went against my principles,” she says. “The NRA was founded on gun safety. It’s become just an advocacy group for preventing any restrictions on gun ownership. That doesn’t sit well with me.”

Miller, who has been filing an assault weapons ban bill since 2013, started with six co-sponsors.

“Last year I had twenty-six. That momentum is going to keep going. There’s a lot of support for something to go to the floor,” he says.

Some things have changed since Sandy Hook, says Hemenway. Foremost, the dam that the Dickey amendment built has cracked. The 1996 rider on a spending bill, named for its sponsor United States Representative Jay Dickey, prohibited the use of any money allocated to the Centers for Disease Control and Prevention for injury prevention and control “to advocate or promote gun control.” Federal research funds evaporated — and so did the research.

But information about gun violence is starting to flow again, he says. For the first time, three states — California, Washington and New Jersey — are investing in gun research. The media has taken an interest that lasts longer than thirty-six hours after the latest mass shooting, and the subject has attracted a whole new generation of researchers.

Dr. Megan Ranney, an emergency medicine physician, Brown University professor and co-chair of the governor’s gun safety taskforce, is part of this new wave. In 2017, she co-founded the American Foundation for Firearm Injury Reduction in Medicine (AFFIRM), a nonprofit that funds research that would form the basis for protocols to treat gun injury and death as a public health problem.

“I was told that it was not wise for me to talk about firearm injuries and deaths or gun violence. It would ruin my career and there was nothing we could do about it,” she says. “What started it for me was Sandy Hook. I had a daughter who was the age of those kids. The fact that we as a nation did nothing about it infuriated and disappointed me. I had an obligation to do something to fix this. I was no longer willing to be silent.”

This December marks the seventh anniversary of Sandy Hook. Theresa Moretti is still waiting for society to act.

“I’d like to say that I’ll live to see it, because my faith in humanity has been sorely tested, as it was that day and every shooting since,” she says. “I would like to think for my grandson there would be something better.”