Going from Cluttered to Classic 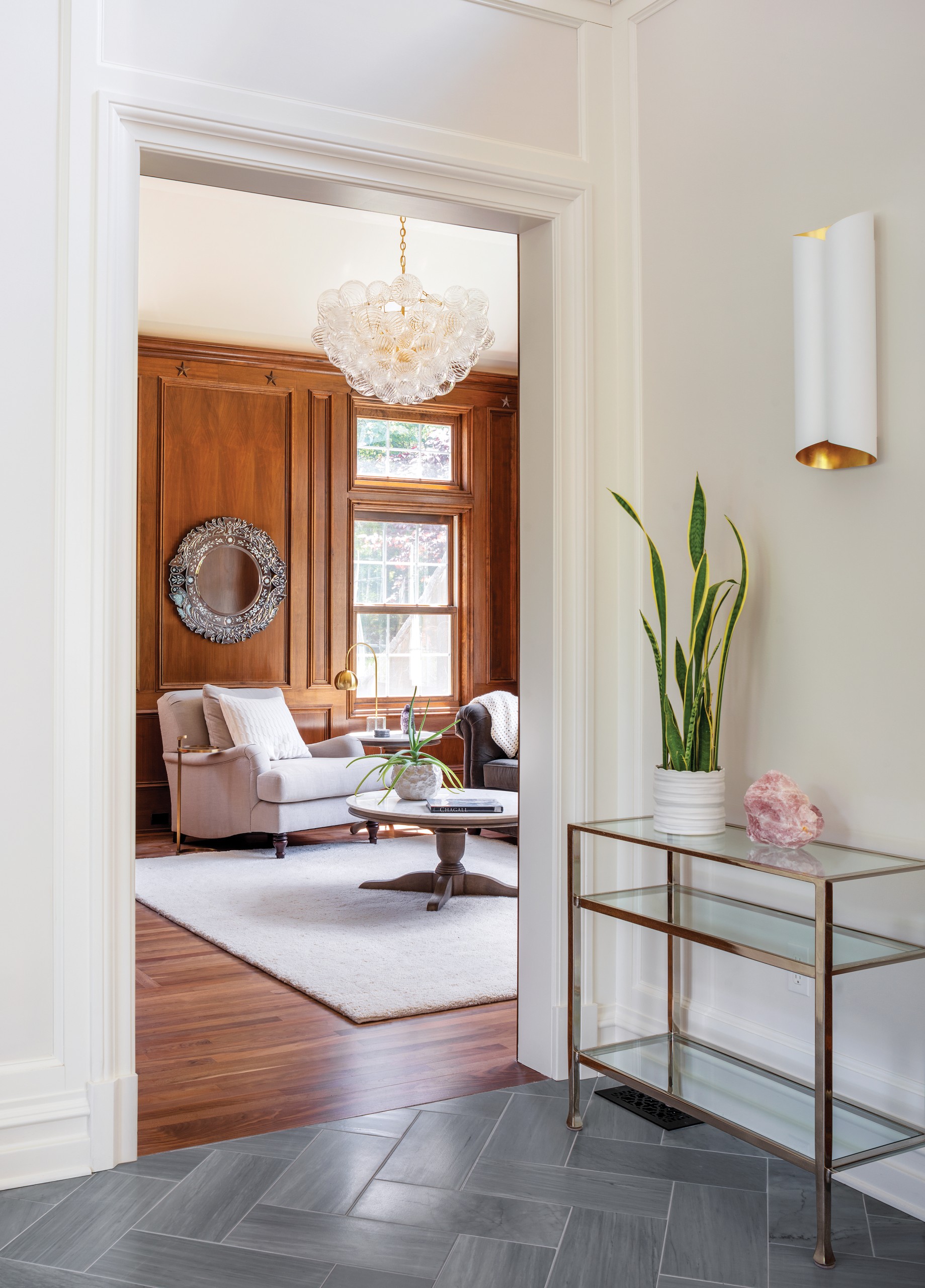 The library’s walnut floors and paneling are original. The entryway floor, in a herringbone tile pattern, is from
the Tile Shop. The entryway sconce and library chandelier are Visual Comfort. Photography by Warren Jagger.

In a hot real estate market, it’s hard to imagine a house near the beach lingering for ten years. Nevertheless, that was the fate of this noble, but overly loved home in Green Hill, which languished for a decade before a Jamestown couple bought it in 2020.

Built in 2004, the 3,700-square-foot house had good bones, but its interior was overwhelmed by too much detail. Ornate plaster columns, Palladian windows, heavy wood ceilings and every room painted yellow had created a disjointed, vaguely Italian villa vibe. “The original builder put his heart and soul into it,” says architect Laurie Keene, but the design wasn’t working. The entire space needed a major refresh, and Keene’s clients were game. “We knew each other, so we worked well together,” she says. 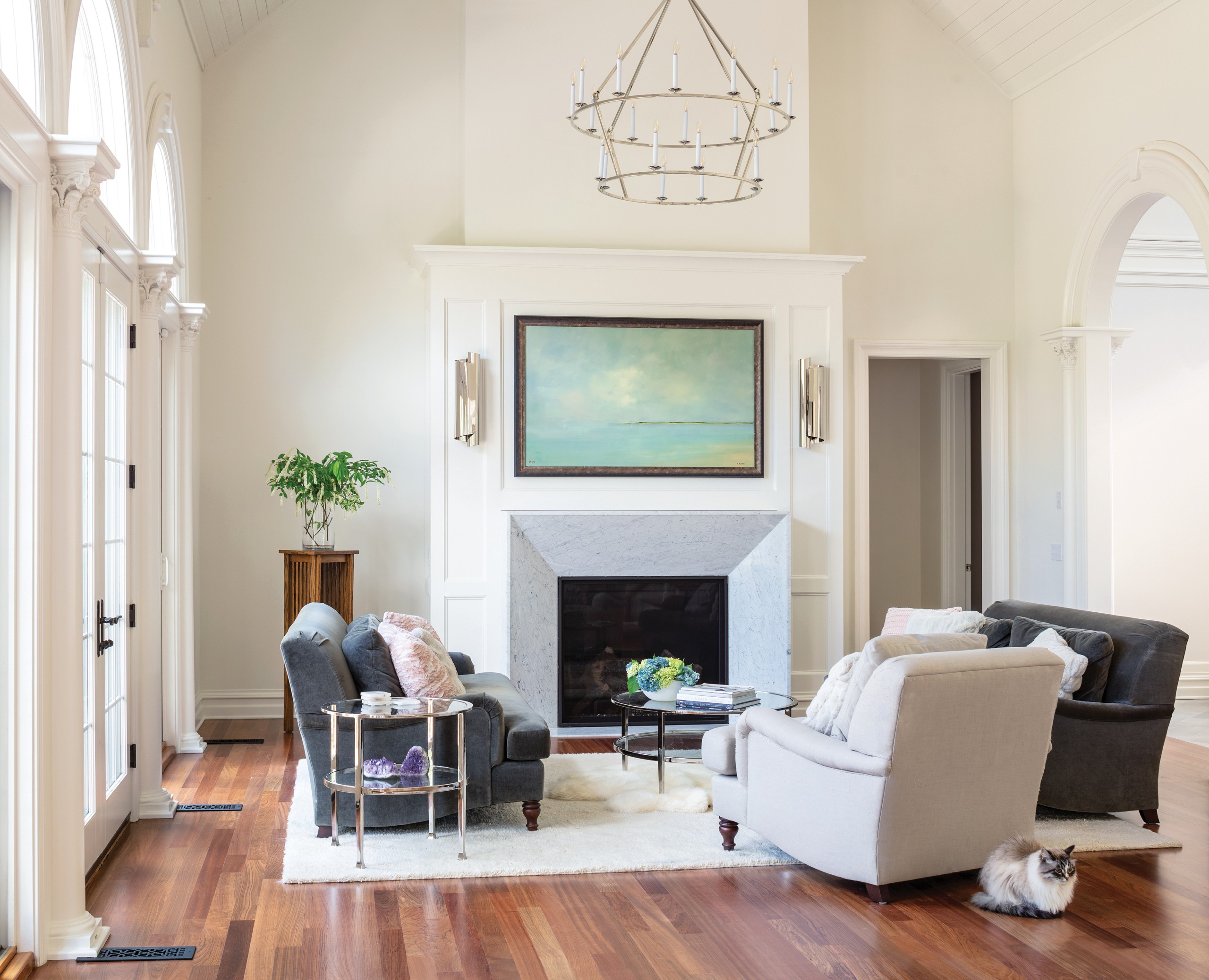 In the living room, the two-tier Visual Comfort chandelier balances the scale of the room. Floors are Brazilian cherry. Photography by Warren Jagger.

Top of the to-do list: The living room. A new marble fireplace, with mantel and sleek millwork, is more in proportion to the high-ceilinged space than its curvy predecessor, an undersized wood stove that was a distraction in the large room.

The understated design of the new fireplace and mantel provided the creative through line for redoing the dark and cramped kitchen. Keene’s clients love to entertain and once they committed to a complete overhaul, she says, “It was great, let’s do it!” 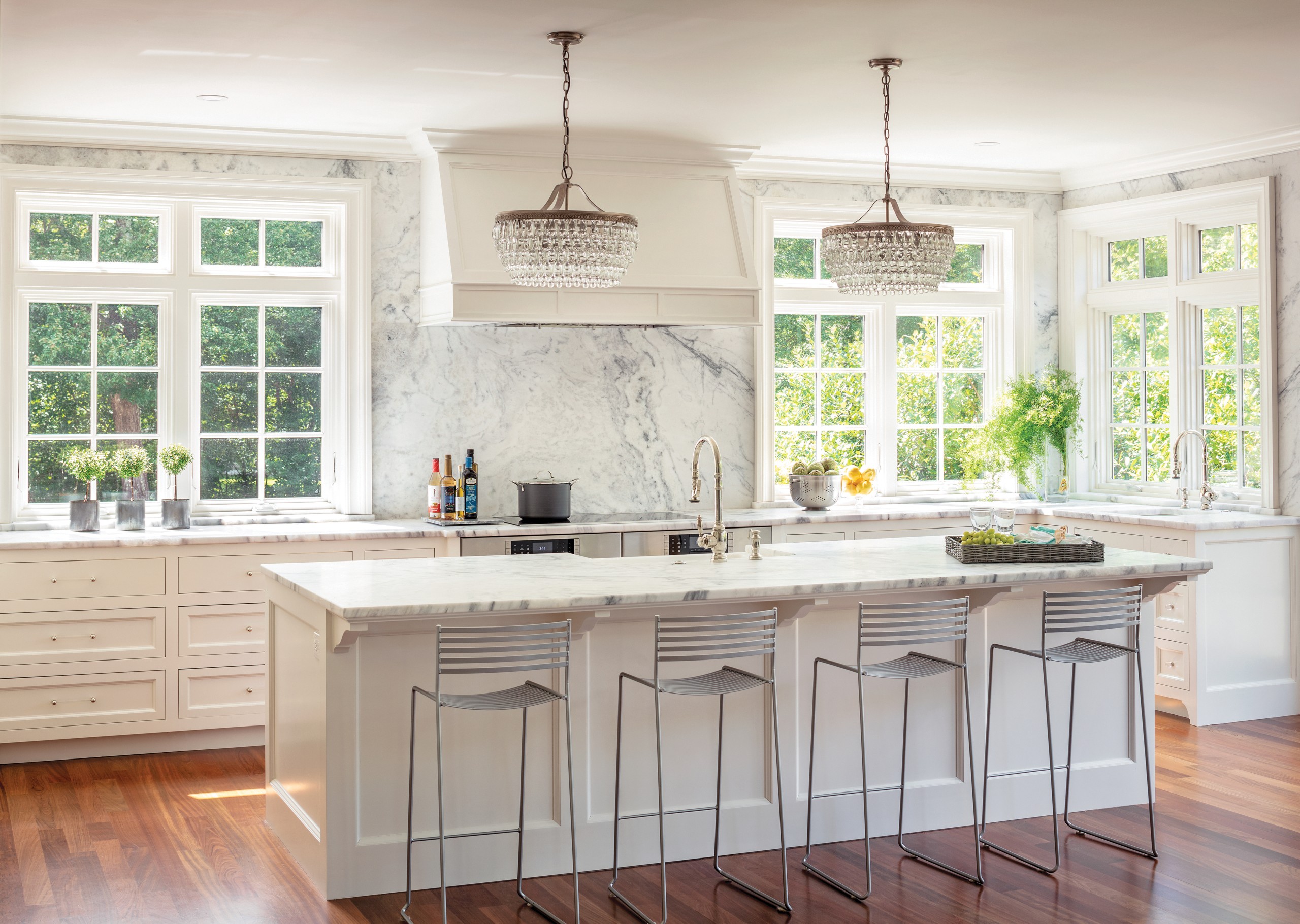 The couple went big: two sinks, two ovens, two dishwashers, two refrigerators (plus wine cooler), a Bosch induction cooktop and a drawer for the microwave. It was a challenge to pull off, but stashing a couple of the duplicates in a onetime broom room, now pantry, avoided the appearance of an appliance showroom, Keene says. Anthony Pastore, of Pastore Builders, built all the cabinetry, and sleek Mont Blanc marble counters and backsplash provide a visual anchor. A new built-in breakfast nook surrounded by windows opens up a sunny corner that had felt disconnected. 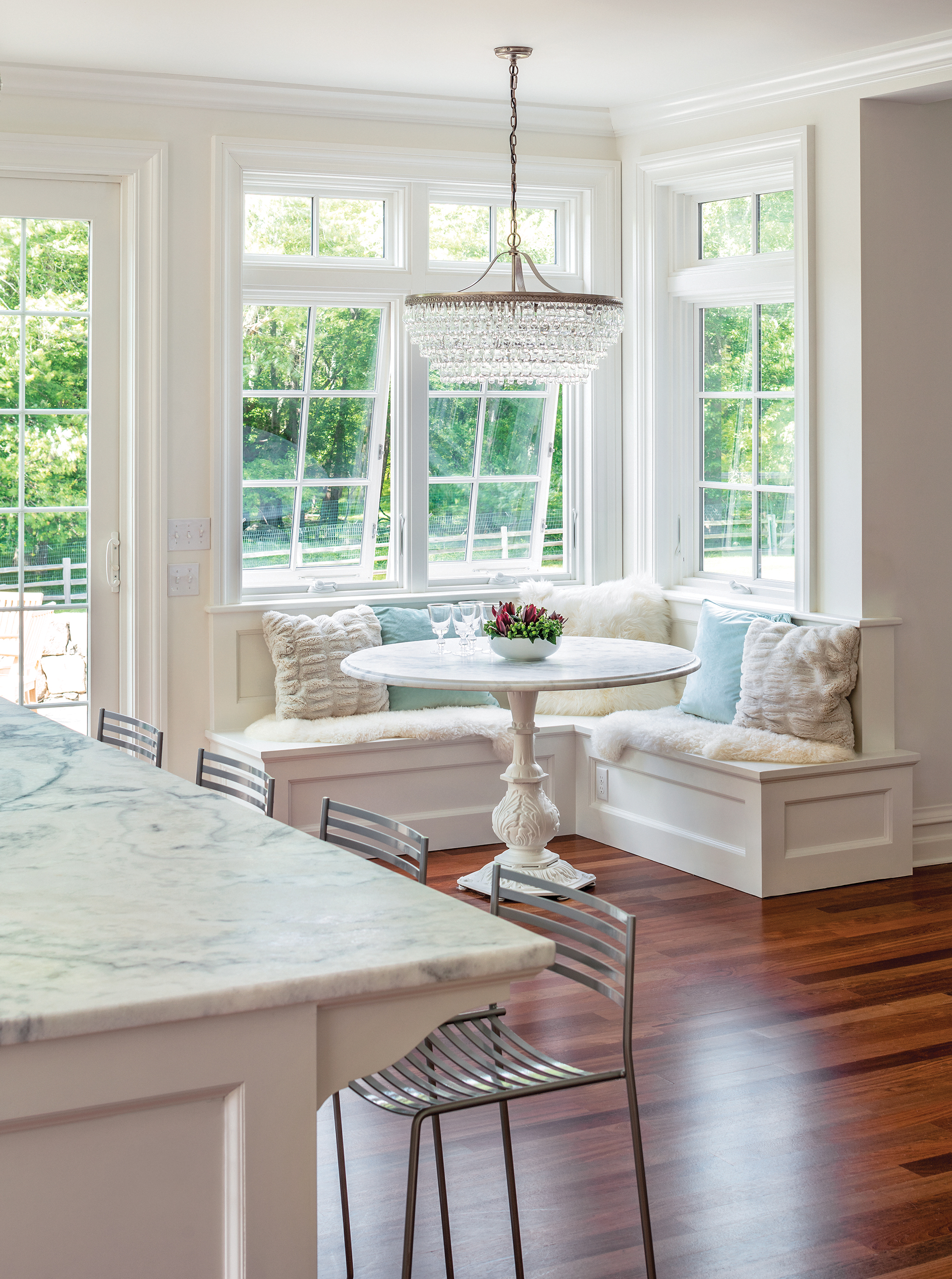 The pared-down, less-is-more aesthetic extends to the master bath, which had lacked cohesion and natural light. Keene designed a new double bowl vanity, flanked on one side with a luxurious tub and double-hung windows, and a bidet on the other. 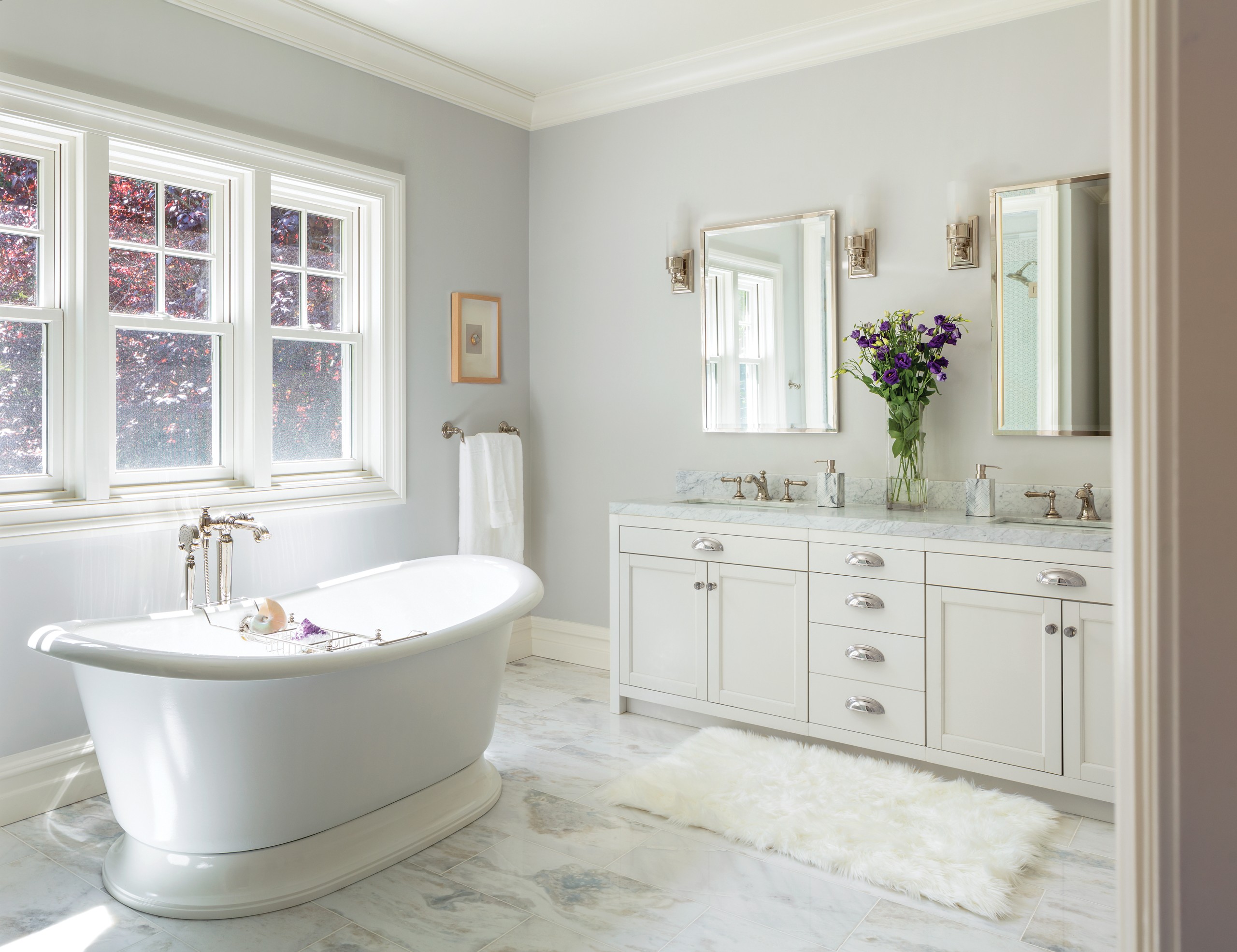 The clients’ love of marble reappears as an element in the bathroom counters and the floor. (They wisely bought a massive slab for the project before the reno got underway.) While most of the pendant lights throughout the house are an updated take on tradition, the eye-catching scalloped chandelier in the master suite, with its playful nod to the beach nearby, is an exception. 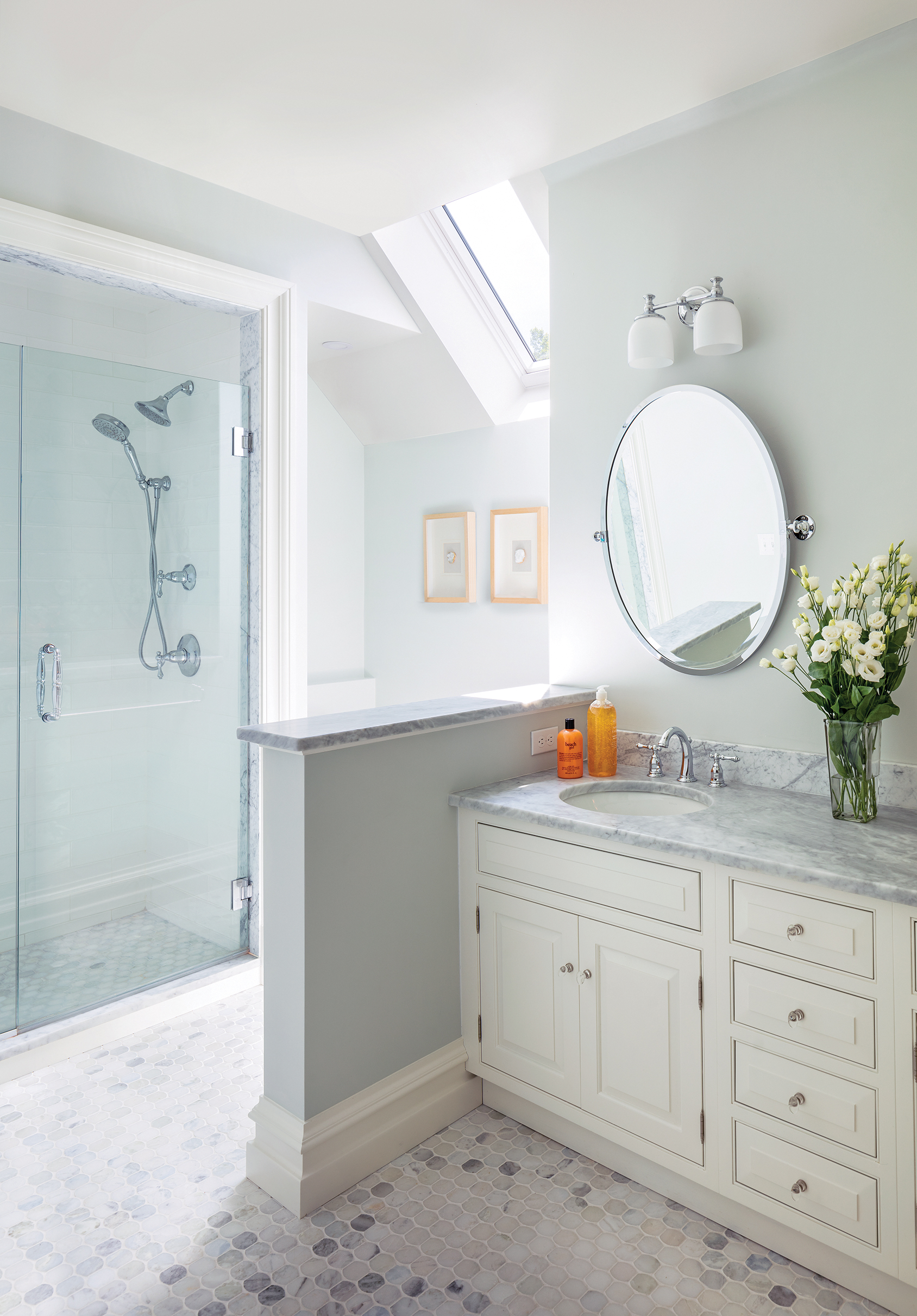 A new skylight brightens the shower area in the second bathroom.Photography by Warren Jagger.

The project was Keene’s first since opening her own firm, Keene Architecture. Despite launching in the middle of the pandemic, as well as having a new baby, she says everything went smoothly. It only took a matter of months, and there were no troublesome supply chain issues. Timing, she admits, was everything. It helped that the builder is also her partner in life. “Communication flowed freely,” she says. “We were literally doing the demo while we were still designing, although I wouldn’t recommend it,” she deadpans. First time out of the box, though, the graceful results speak for themselves. 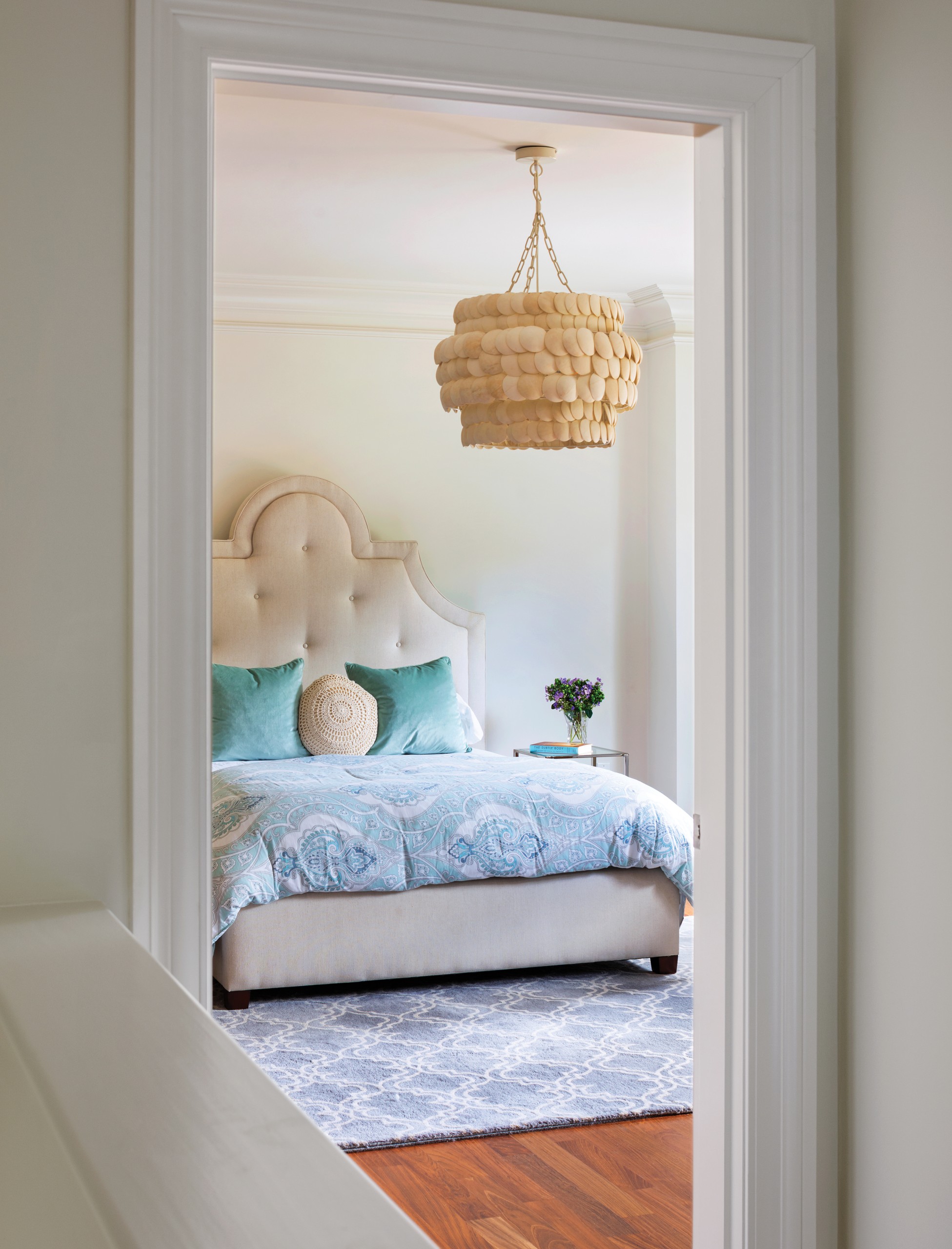