This Property Proves There Are Never Enough Gargoyles

The one-acre homestead entertains and intrigues with a lush blend of plant life and statuary.

Surrounded by sprawling plants, gargoyles and fairies, the gardens at this shady Potowomut home feel magical. Homeowner Erica Malinowski, a self-professed garden junkie, says the yard has evolved over two decades, but it didn’t get crazy until ten years ago.

“I started out just puttering and now it’s an obsession,” Malinowski says. “I had a lot of perennials that would re-seed, so I needed more garden space and less grass.”

The result is a combination of untamed “I planted myself” garden areas with more orderly beds around the house, along with colorful containers and hanging baskets. In total, there are three huge beds in front, gardens on both sides, a backyard vegetable garden, a pool garden, several herb gardens and two nursery gardens for starting plants.

Malinowski even has a Letterman-style list of ten ways you know you’re a garden junkie. For example, when other women say flats, they’re talking about a type of shoe, but the gardener thinks of flats of flowers. The work is her passion and her therapy.

“You get out there, dig and move things around — it’s fun. It’s like decorating for the outdoors,” she says. “You create little garden rooms everywhere — exterior design instead of interior design.” 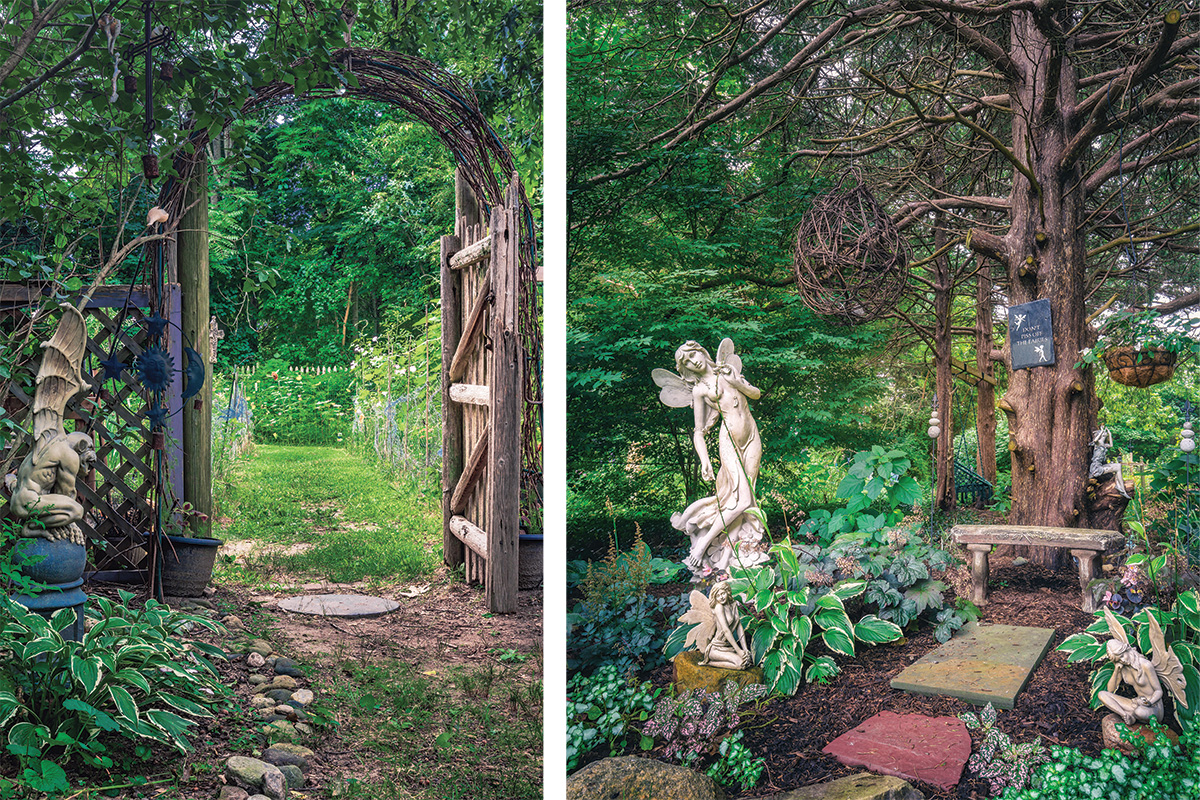 Facing page: A gargoyle with massive spiny wings guards the garden entrance to ward off evil spirits and rude groundhogs. this page: Fairies with a ’tude reside in a Zen-filled shade garden that includes a tree swing, a homemade bittersweet vine ball, hostas, astilbe, coleus and more. Photography by Wolf Matthewson.

To fill her gardens, she chooses what will grow well here and bloom all year. For best results, the key is to favor native plants.

“If you try to grow something not for this area, you have to pay more attention and it’s not going to thrive,” she says. “For example, I don’t do too many roses, they’re just so high-maintenance. I have a couple of landscape roses and a couple of the hardier ones, but if I have to coddle them I don’t want them.”

She often divides and reseeds perennials but will splurge on annuals for the nonstop color.

“Starting in March I go out and buy whatever I like the look of; it’s different every year,” she says. “I store them under the patio until it’s warm enough, then I spread them out and play with color combinations. I plant my containers first, then fill in other areas.” 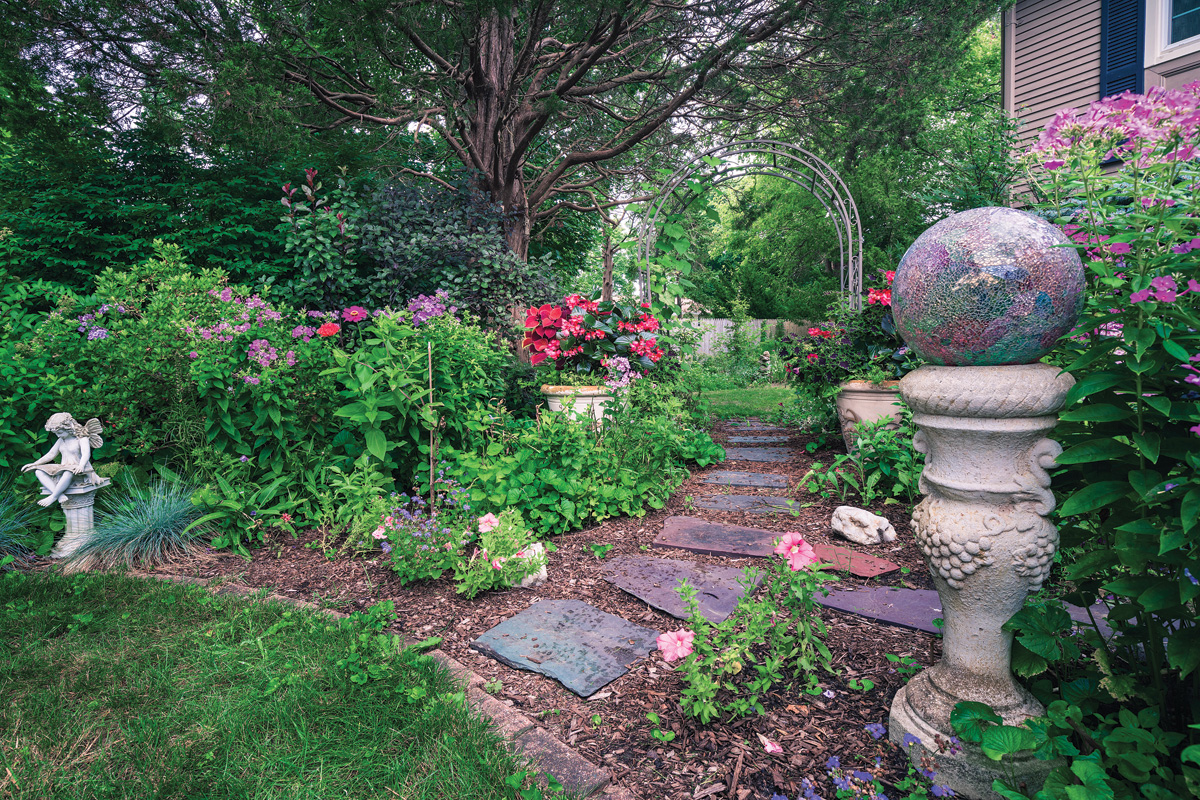 A flagstone walk flanked by colorful phlox and annuals, plus a mosaic gazing ball, leads the way from one garden to the next while a playful frog hides in the shade. Photography by Wolf Matthewson.

“I started counting once and had thirty just on the patio. I thought that was embarrassing so I stopped counting,” she says. “If I see something good on sale, I’ll find a spot for it. I tend to find something and then dig out a new area to highlight it.”

Malinowski refuses to choose any favorite plants. “That’s like asking me to name a favorite child,” she says.

Late-May through June is her busy time when she spends every spare minute after work and every weekend planting annuals and dividing perennials. By Fourth of July, she considers herself done and can sit back and enjoy her gardens, her only tasks watering, pulling a stray weed and deadheading. 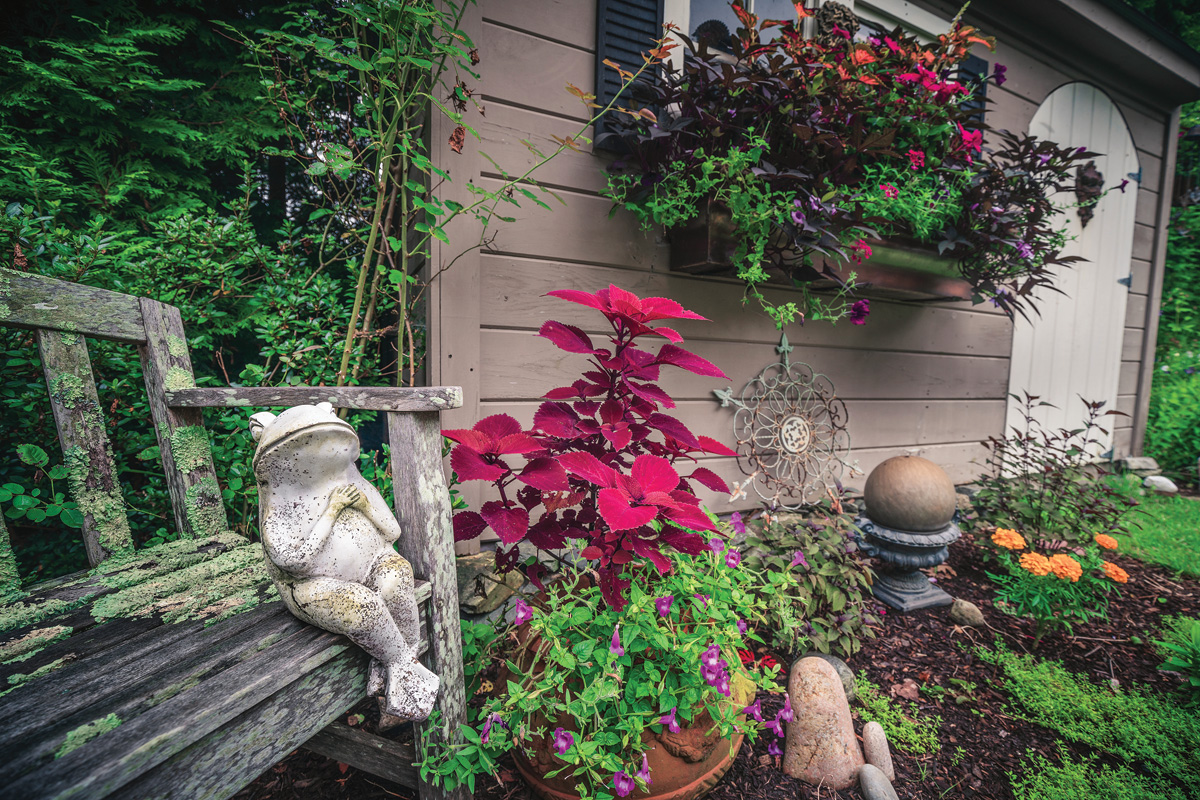 Malinowski’s statuary obsession began when she saw a gargoyle at King Richard’s Faire and had to have one for herself.

“I’ve always liked that kind of gothic architecture and Celtic vibe and I just started collecting more and more,” she says.

She sought them out to fill shady areas and now buys one or two new ones a year, many from the Design Toscano catalog as well as local shops. There’s the classic winged sentinel guarding the arbored entrance to the backyard, whimsical fairies playing flutes in the crook of a tree and a laughing dragon on her patio, which she calls her office.

More gargoyles on every fencepost preside over the fruit and vegetable garden, which sprouts tomatoes, peppers, purple beans, lettuce, peas, kale, spinach and eggplant.
“But I look for different varieties that you can’t buy in the grocery store,” she says. 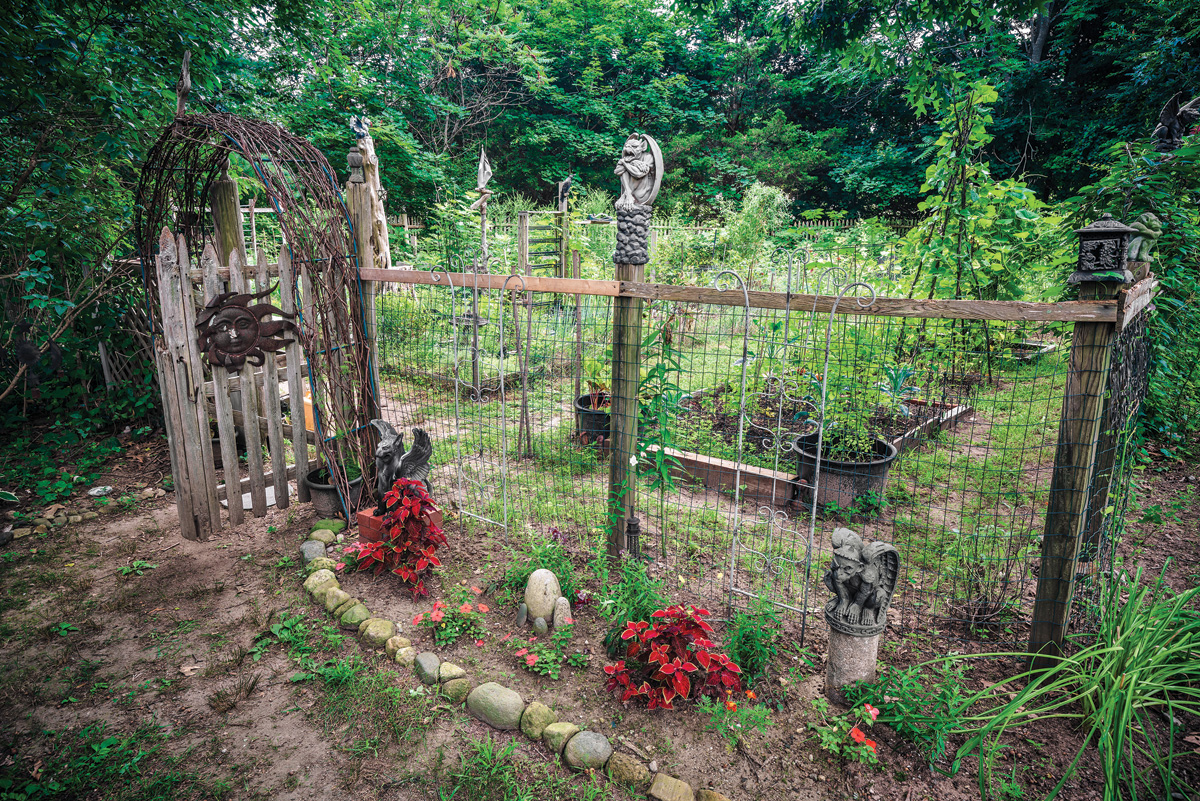 The gargoyles should have warded off pesky groundhogs who took up residence next door to the vegetables, digging huge tunnels and instigating an epic three-year standoff.

“We did everything: double fences, sonic noise, filled in holes, flooded tunnels,” she says. “The deer just nibble a bit and move on, but the groundhogs eat right down to the nub. They have no manners at all; they don’t think about sharing, they just annihilate everything.”

Last year, some foxes and coyotes moved into the neighborhood and Malinowski thinks that may have taken care of the groundhogs.

“I don’t want to say I conquered them because I don’t think I’m in charge of it,” she says.

With this much planting space, you have to be budget-conscious and Malinowski has several strategies. She overwinters coleus indoors, taking cuttings and rooting them in glasses of water. By springtime, she’ll have almost 100 baby coleus ready to move around the yard. 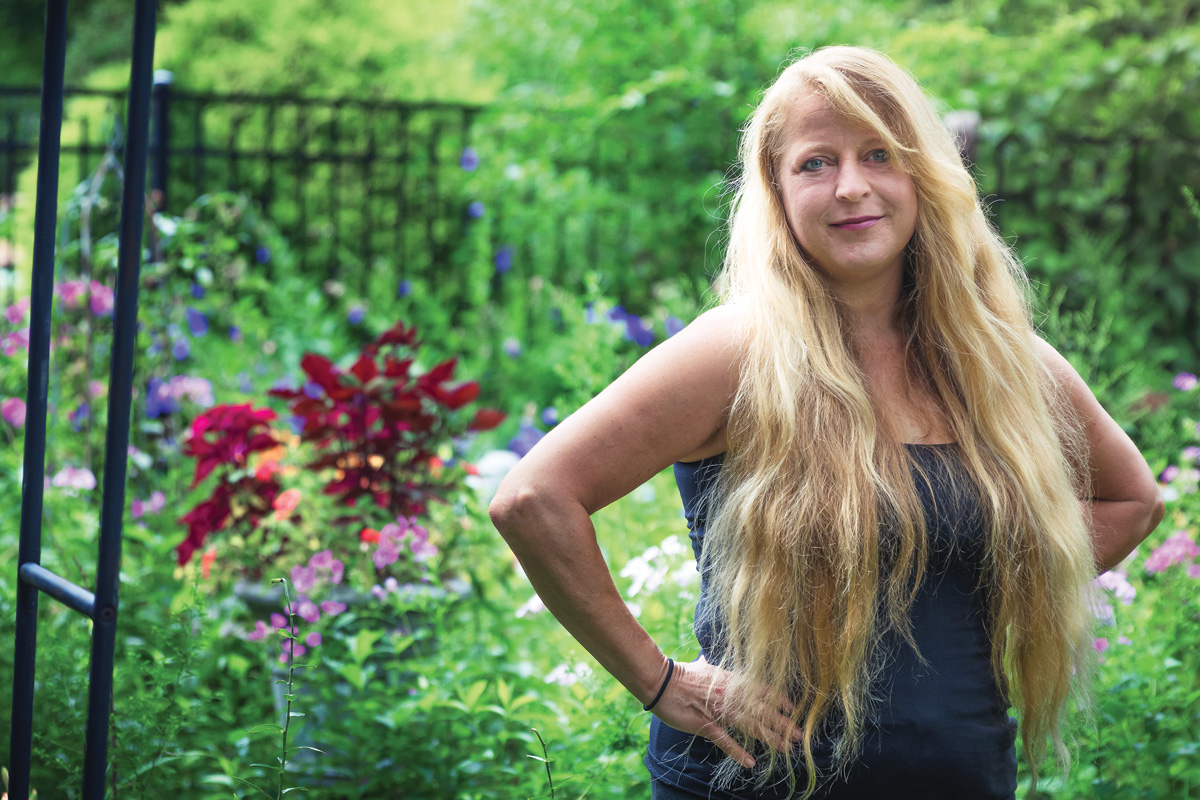 Malinowski caught the gardening bug from her family, but she fell deeper in love when she took a landscape architecture class her senior year in college. (“If I’d taken it earlier, I would have totally changed my major!” she says.) Photography by Wolf Matthewson.

“To buy them in the spring, they’re $5 apiece,” she says. “Last year I rooted seventy, so seventy times five — I tell myself that’s how much money I didn’t spend!”

She also keeps an eye out for new shoots (called volunteers) from perennials and moves them to fill other spots. The ones that spring up in the walkway are her renegades.

“You have to learn to identify seedlings and be careful not to mulch around plants where you’re expecting volunteers; the mulch will smother them,” she says. “I also like to divide perennials. It’s like getting free plants. I have a lot of those as staples everywhere; it gives the garden a nice cohesive look.” 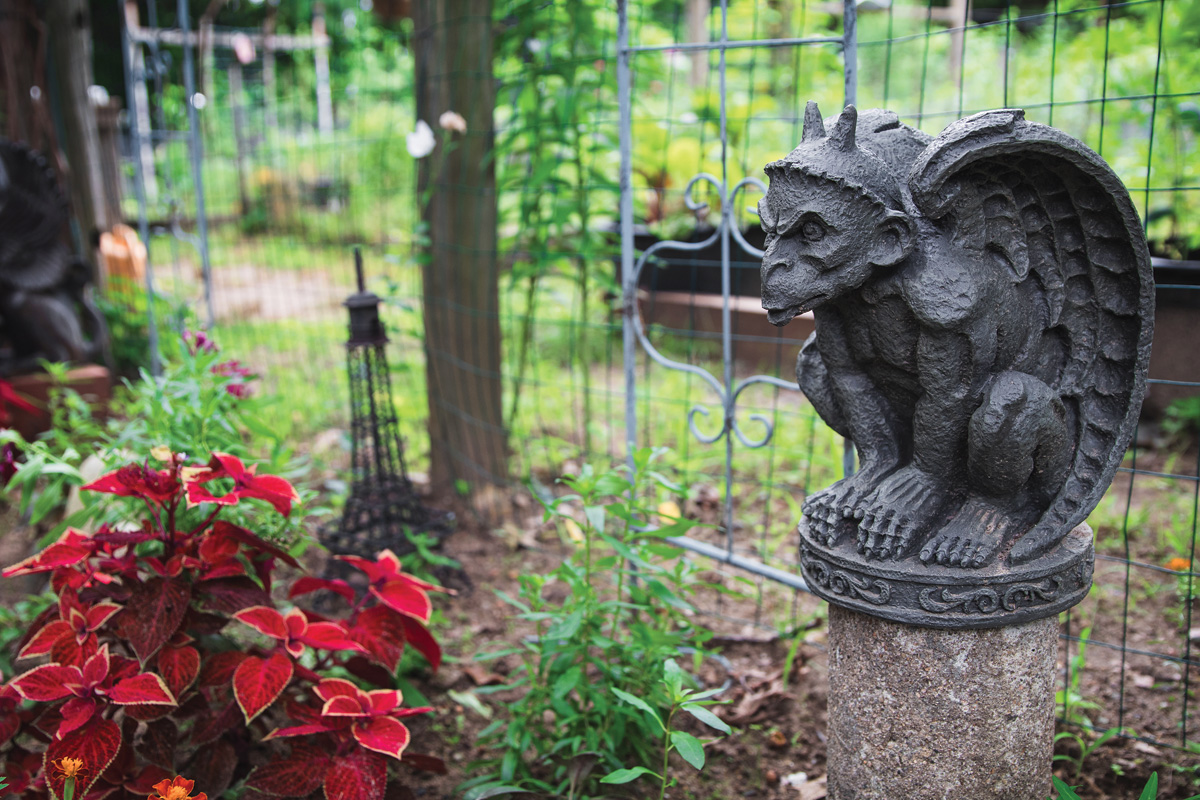 Many varieties of versatile coleus add pops of red, maroon and purple throughout the landscape and in window boxes. Natural elements such as rocks serve as edging and save on the budget, leaving more to spend on statuary, obelisks and garden decor. Photography by Wolf Matthewson.

Gardening is in Malinowski’s DNA. Both sets of grandparents had huge gardens where she played as a child, and her aunts were gardening enthusiasts, too. Her garden still grows offspring from plants her family gifted her.
“I have phlox that came from my grandmother’s house and they’ve reseeded themselves all over the place,” she says.

Malinowski is passing on her knowledge to the next generation of gardening enthusiasts, as well. 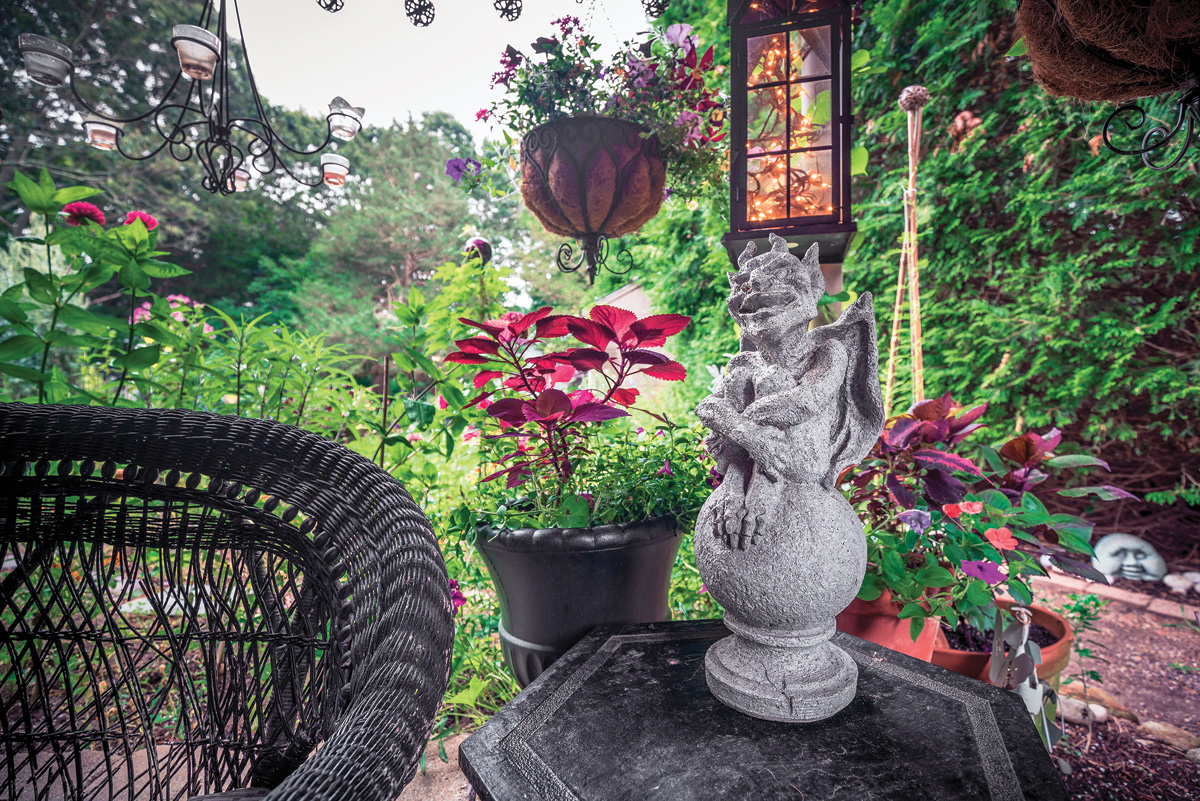 There’s a fun visual at every level, from hanging containers overhead to a smiling gargoyle on the table to a moon face peering up from the walkway. Photography by Wolf Matthewson.

“People have gotten in trouble for weeding things that weren’t weeds,” she says. “And I’m trying to teach my granddaughters which flowers they can pick. You pick a lily, that’s not coming back.”