Explore this Houseful of History in North Smithfield

An unabashed maximalist returns to her roots in the 1808 Joel Aldrich House. 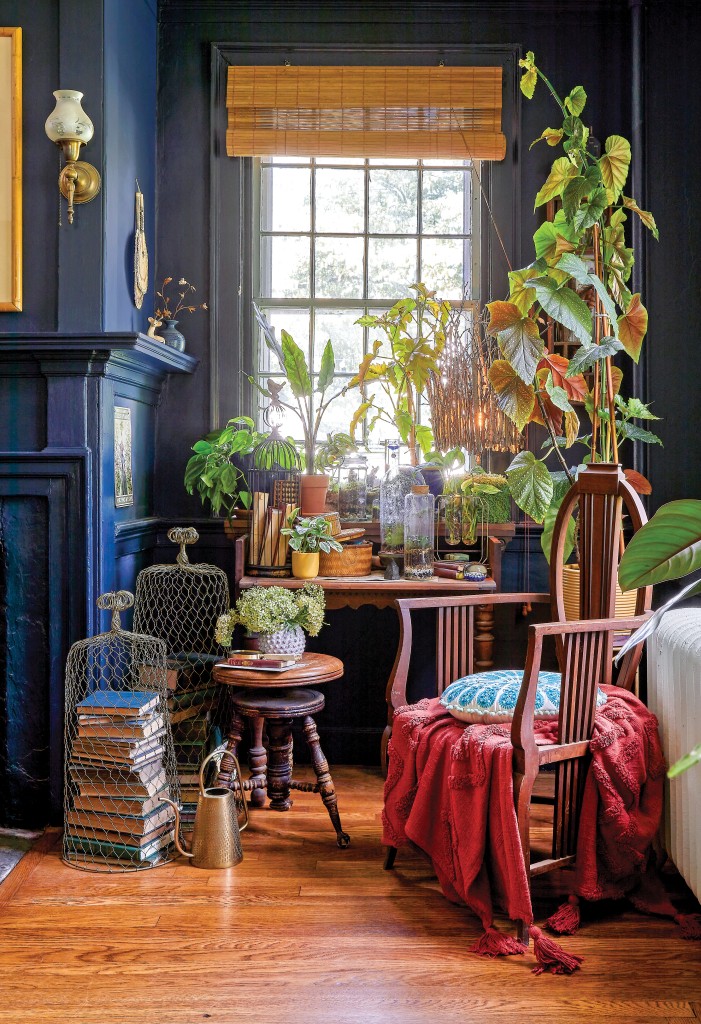 A cozy nook in the dining room/library. Photography by Angel Tucker

But one day, driving by a gorgeous colonial on Great Road, she had a premonition. That house, she thought, will go up for sale soon.

A week later it did. 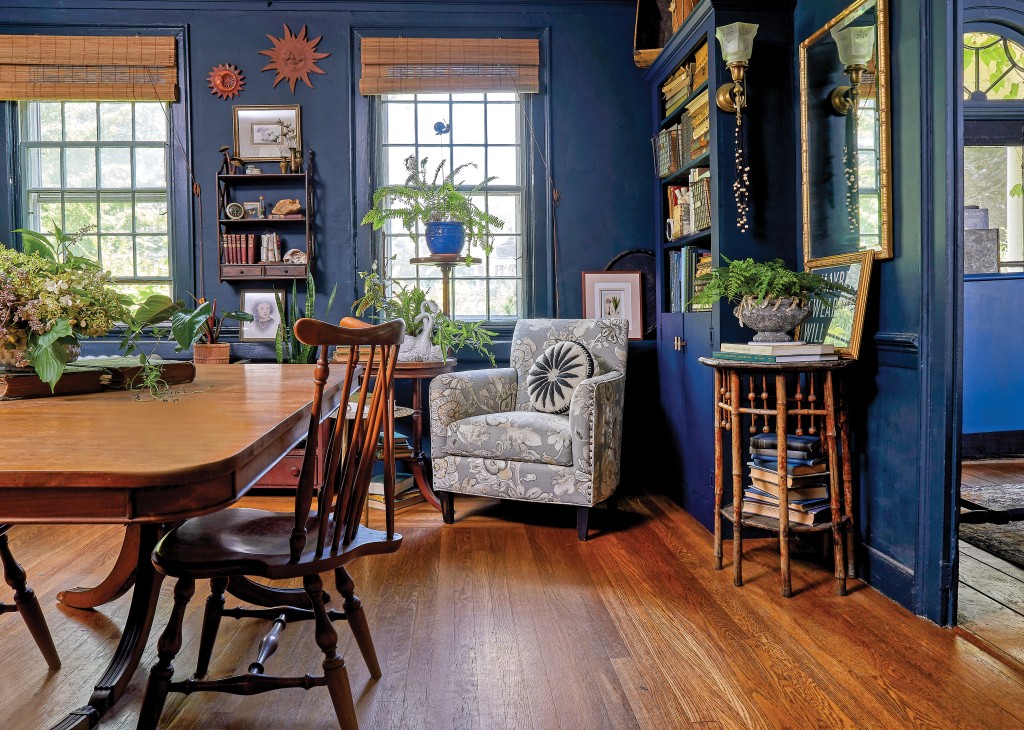 That’s how, four years ago, she and her family found themselves the new owners of the 1808 Joel Aldrich House in Union Village. And ever since, bit by bit — from garden and kitchen to bedrooms and baths — they’ve been making it their own.

“I love old houses,” she says. “I’ve always wanted to live in a house like this.”

Bold swaths of color add atmosphere to almost every room. Gudz-Reynolds chose Olympic Black Forest paint for the dining room/library, where a rainbow-hued wall of vintage books are sorted by color. She started with her grandfather’s collection, and added to it throughout the years from books she found at nearby Antiques Alley (formerly Stillwater Antiques) in Greenville.

It’s one of her favorite spaces in the house. You can often find her there, nursing a coffee and doing a puzzle or game with her youngest daughter, sometimes with a fire roaring in the woodstove during the winter. She just added some wire cloches from the garden and an old broken chair from the basement to keep things fresh. 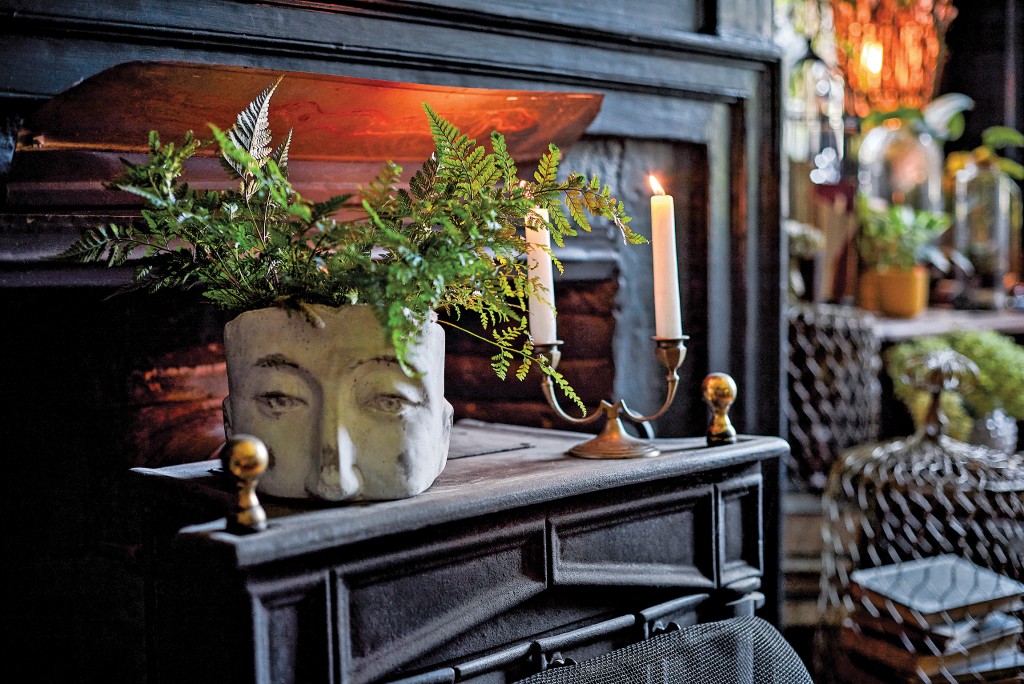 Faces pop up in unexpected spots, whether in a fanciful vase or a piece of framed art. Photography by Angel Tucker

“The seat has always been broken, and I hope to fix it someday,” she says. “But as it turns out, I’ve always loved things that were a little broken, so I actually may never fix it.”

It was only after buying the home that she discovered she’s related to its first owner: Joel Aldrich was a cousin (and also an uncle by marriage), and she’s related to most of the families that originally settled Union Village.

There are two constants in the four-bed, three-and-a-half-bath home: bold hues and plants. And doors — lots of doors.

The couple took down several of those doors and a tiny storage cabinet in the kitchen to make room for a larger kitchen and adjacent half-bath. They painted the bathroom’s walls a rich green — Sherwin-Williams Jadepool — and repurposed their youngest daughter’s dresser into a vanity, complete with a granite sink. 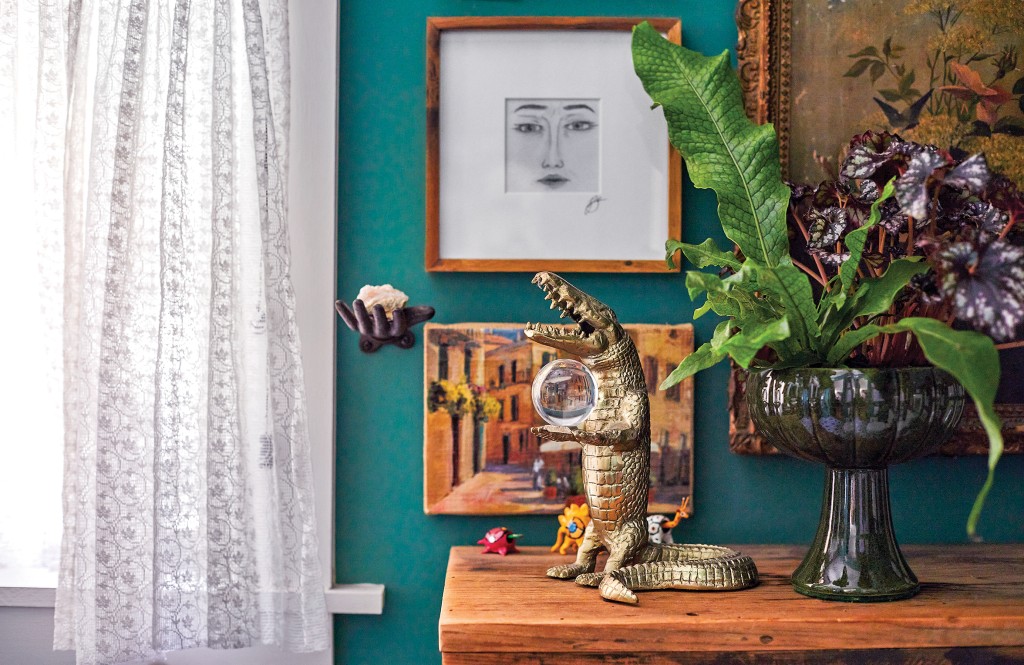 Plants and greenery add warmth to a half-bath, as does Ralph, a golden crocodile wielding a crystal ball. Photography by Angel Tucker

“We have to do everything on a tight budget,” she says, so they do most of the work themselves, saving costs on labor and materials.

A floral designer and owner of Wilder Eden Design Company, Gudz-Reynolds ensures the home is always filled with plants, greenery and cut flowers, much of it sourced from her ample outdoor gardens. Outside — and in — you’ll find hydrangeas, ninebark, clematis, dahlias, roses and milkweed artfully arranged in thrifted vases, glass vials and any number of pots with tiny face details. 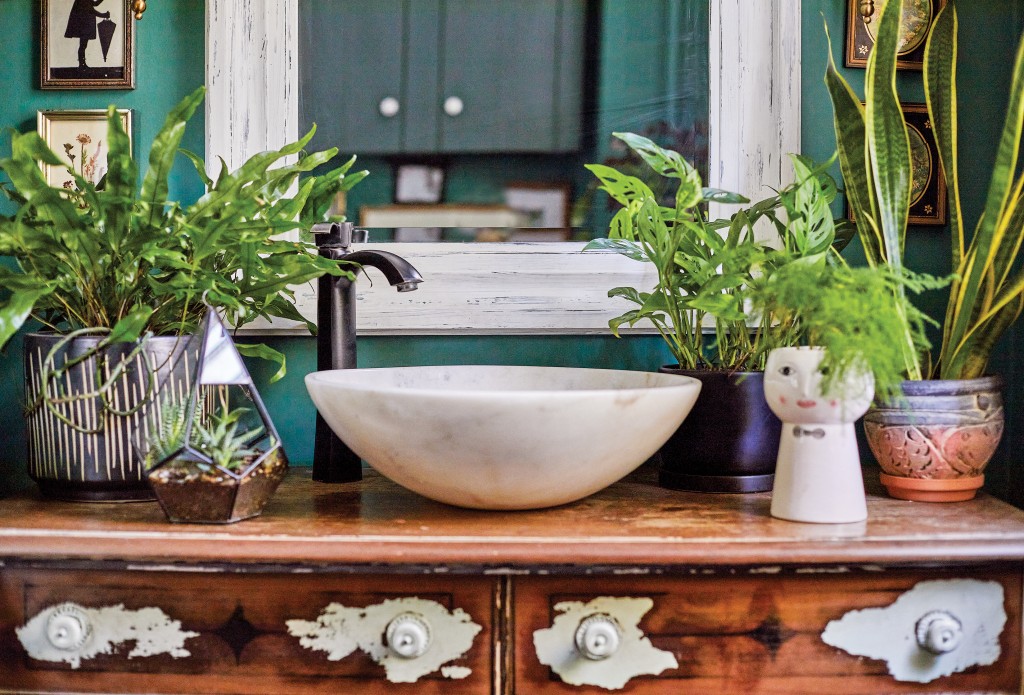 A dresser from their previous home serves as a vanity. Photography by Angel Tucker

She’s passionate about decorating with thrifted decor and antique treasures found online and from Antiques Alley. She loves the marketplace so much she became a dealer herself there last year, selling decor, plants and refinished furniture out of her three booths.

“Vintage and thrift shopping is good for the environment and makes for a more unique and personalized home,” she says.

The kitchen was one of their biggest projects. It was cramped and dated — not an ideal gathering space for a family of five.

“It was pretty awful when we started,” says Gudz-Reynolds, with its bulky white cabinets, a built-in hutch and segmented spaces that made the room feel claustrophobic. It took them a few months to design the layout, and eight months in all to complete. 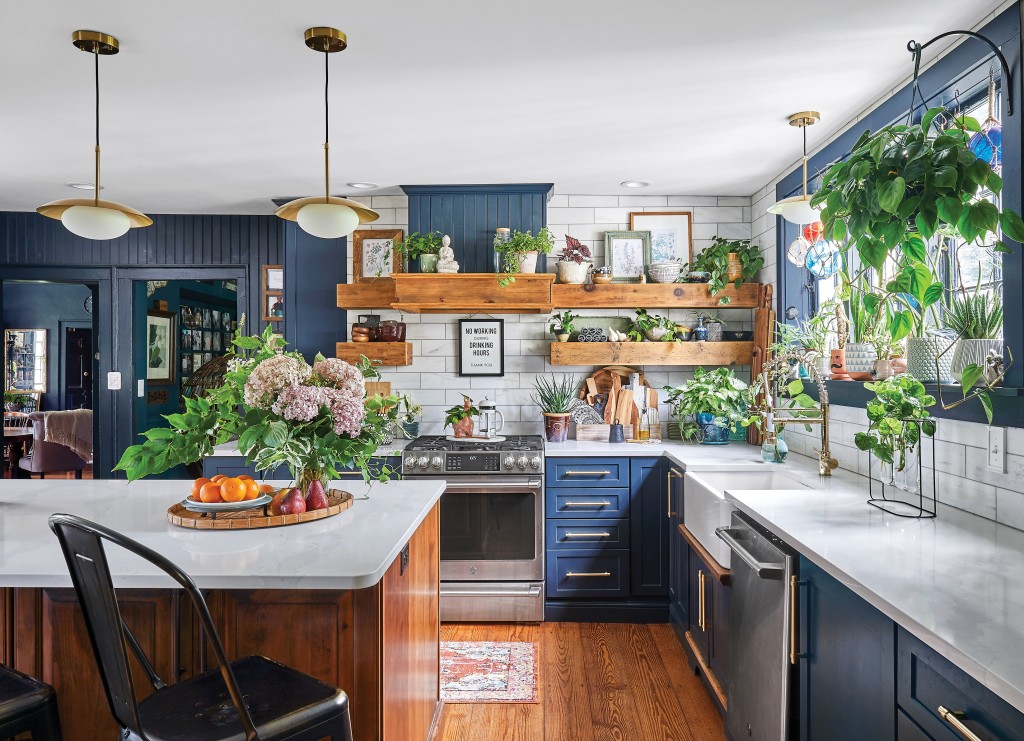 The verdant, sunny kitchen has an airy and open layout. Photography by Angel Tucker

They gutted the room down to the studs and started installing the cabinets on Thanksgiving, finishing in time for Christmas. They moved the stove against a wall, removed a breakfast bar and installed brand new cobalt cabinets, a marble backsplash, a spacious kitchen island and quartz countertops.

Libby and Nate designed and crafted the floating wooden shelves surrounding the stove, using attic floorboards removed from the master bathroom. They sanded them down, but not too much — they wanted to leave the original details and nails hammered in here and there. Modern pendant lampshades, plenty of greenery and a collection of colorful glass fishing floats complete the inviting space, while Libby regularly rotates decor and signs — “No working during drinking hours,” “Maybe swearing will help” — to keep it fresh. 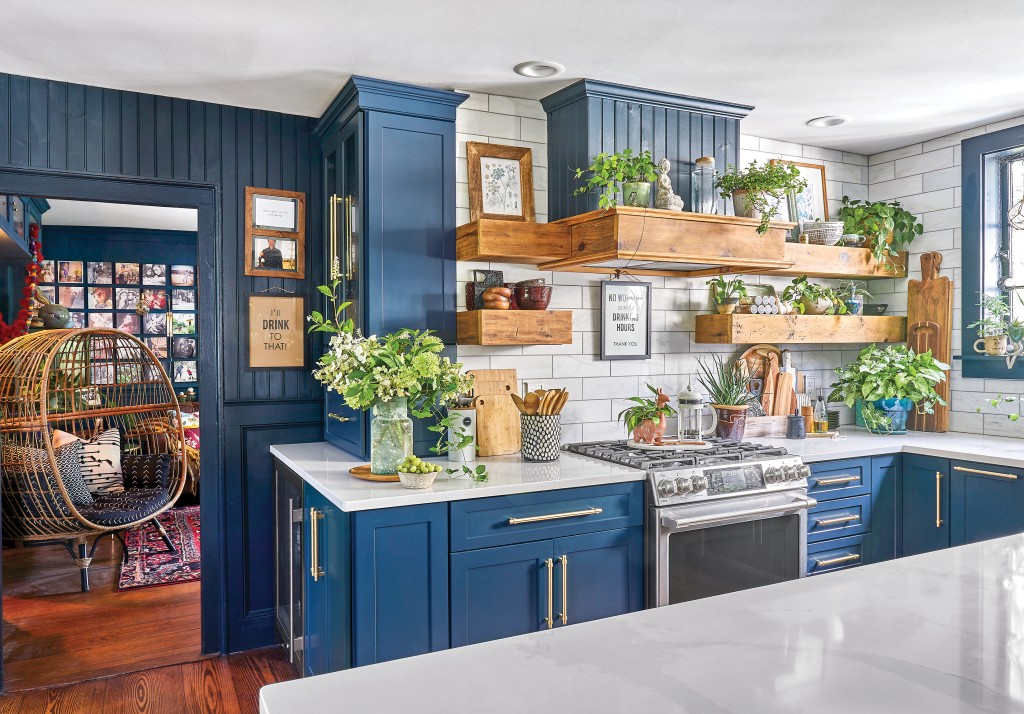 An egg chair and a wall of Mixtiles peek out from the living room. Photography by Angel Tucker

It all makes for a kitchen that’s now used as a gathering space, instead of a cramped and dated relic from the ’90s.

“I never wanted to sit in it before,” she says. “Now it feels cozy — that’s what I like. I want a home that feels cozy.” 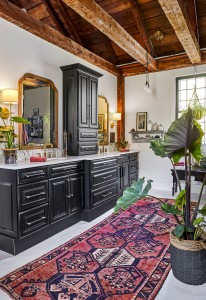 A thirteen-foot double vanity and vintage Persian rug give the master bathroom a chic boho vibe. Photography by Angel Tucker

On their first day in the house, Nate knocked down the wall of the tiny closet in their master bedroom, opening up space to the former maids’ quarters on the other side. Their goal: Building the master bathroom of their dreams.

Much like the kitchen, they sketched out a vision. Gone were the blue carpet, blue shelves and walls trimmed in even more blue. They ripped out the attic floorboards above, exposing gorgeous post-and-beam detailing that made the room soar. Look closely, and you can spy 200-year-old bark remnants on the roughly hewn boards. “We saw those beams and thought, ‘If we’re doing it, we’re doing it big,’” Libby says.

After watching many YouTube videos, Nate crafted a four-by-five marble shower from the ground up, as well as a thirteen-foot-long double vanity with quartz countertops. They painted it in Sherwin-Williams Tricorn Black to match the bedroom walls.

The entire process took two years. They called in pros for electrical and plumbing, and to install the shower tile and vanity countertops, but did everything else themselves.

“We wanted it to be beautiful, but also not go broke,” Libby says with a laugh.

They succeeded, crafting a lofty, bright space that — much like the rest of the home — is a soothing oasis with history and modern touches woven throughout.

The house, like many other historic properties, is a work in progress. You can follow the family’s home improvement journey on Instagram at @wilder_eden_design_company and, of course, the hashtag #1808andgreat. 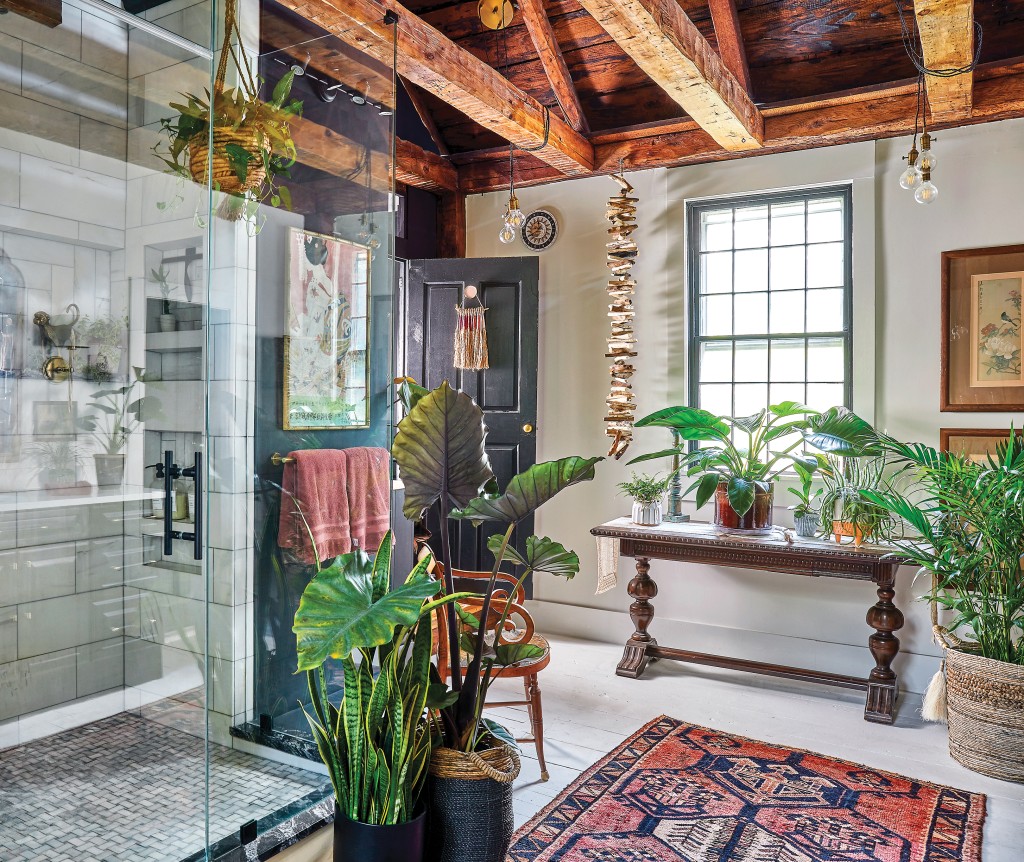 Exposed 200-year-old wooden beams add depth to the master bath, while details like colorful thrifted pottery and a monkey figurine in the shower add whimsy. Photography by Angel Tucker