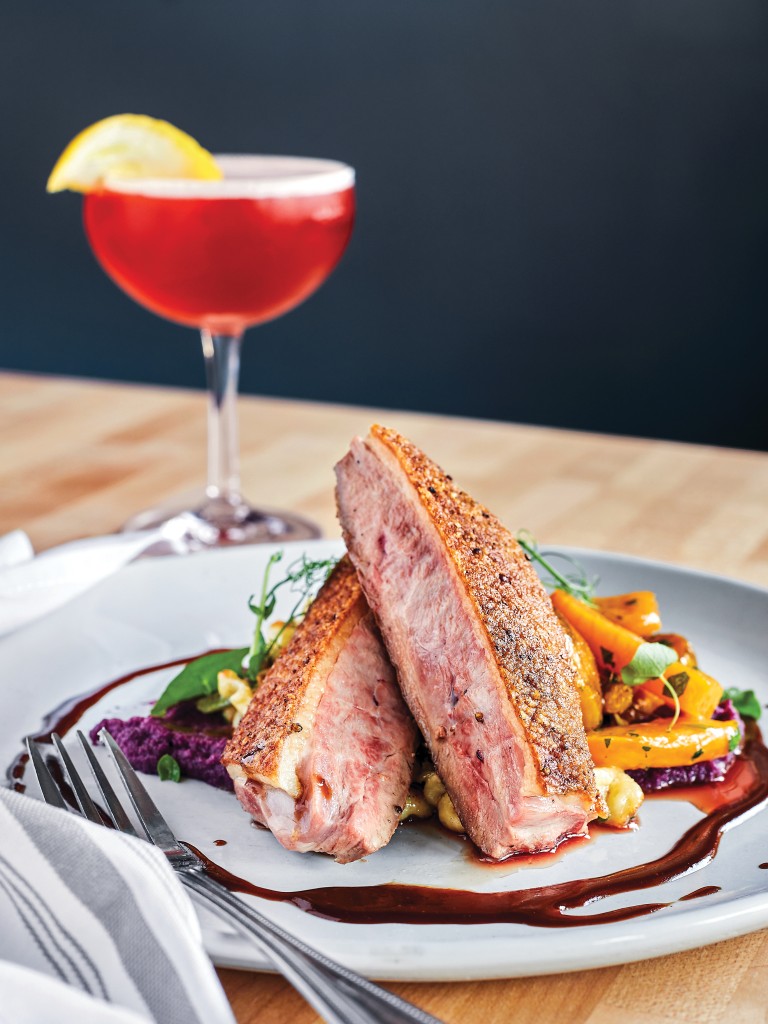 A duck press is about as elitist as you get, as far as kitchen equipment goes. They generally come out of France, propped up
on legs, plated in pristine metals, with a spigot on the front and a heavy wheel on top. Place your cooked and picked duck carcass in the holding tank and you can extract its juicy essence by cranking the wheel clockwise. Or — if you don’t cook a dozen ducks nightly — you could leave the press in the living room, in all its aesthetic glory, and stir up conversations.

Duck Press, in Wakefield, however, is a different story altogether. Owned by chef Mark Bryson and his wife, Alicia, the restaurant is far less restricted, focused entirely on creating a sense of community in a town that still feels like early Americana. Nestled in South Kingstown, Wakefield still has a candy shop, a sewing store and a converted bank that looms over Main Street like the Bailey Brothers Building and Loan. There’s a sweetness to the town, dotted with grand Victorians and the pharmacy Green Line Apothecary, which seems to have sprung, fully formed, out of the 1940s to serve milkshakes and lime rickeys. It feels nothing like France, nothing like far-flung travel — in fact, it evokes a strong sense of nostalgia, even for people born into a world without rotary phones or egg creams.

So where does this outpost fit in? With the word bistro. Technically, of course, it’s French and the menu pays homage to the duck in its many incarnations. But the restaurant — designed by Two Hands Studio — still has the energy of an elevated pub, with the whole neighborhood spreading out from the bar into tables, raising toasts across the room. There’s a tacit understanding that everyone here is in a communal experience.

Unity, though, is a matter of varied perspectives and the space itself is just that. A window-filled front, a brick wall festooned with cartoon humans fixed with donkey and goat heads by local artist Ry Smith, an expanse of teal green and chocolate wallpaper, a collection of framed photography by Rick Catallozzi, and, finally, a white marble bar stretching across the length of the restaurant. There is no defining style — even the servers sport their own eclectic attire, from button-downs to vintage tees. Customers vary as well, from bar-hoppers to early birds, man buns to military buzz cuts. 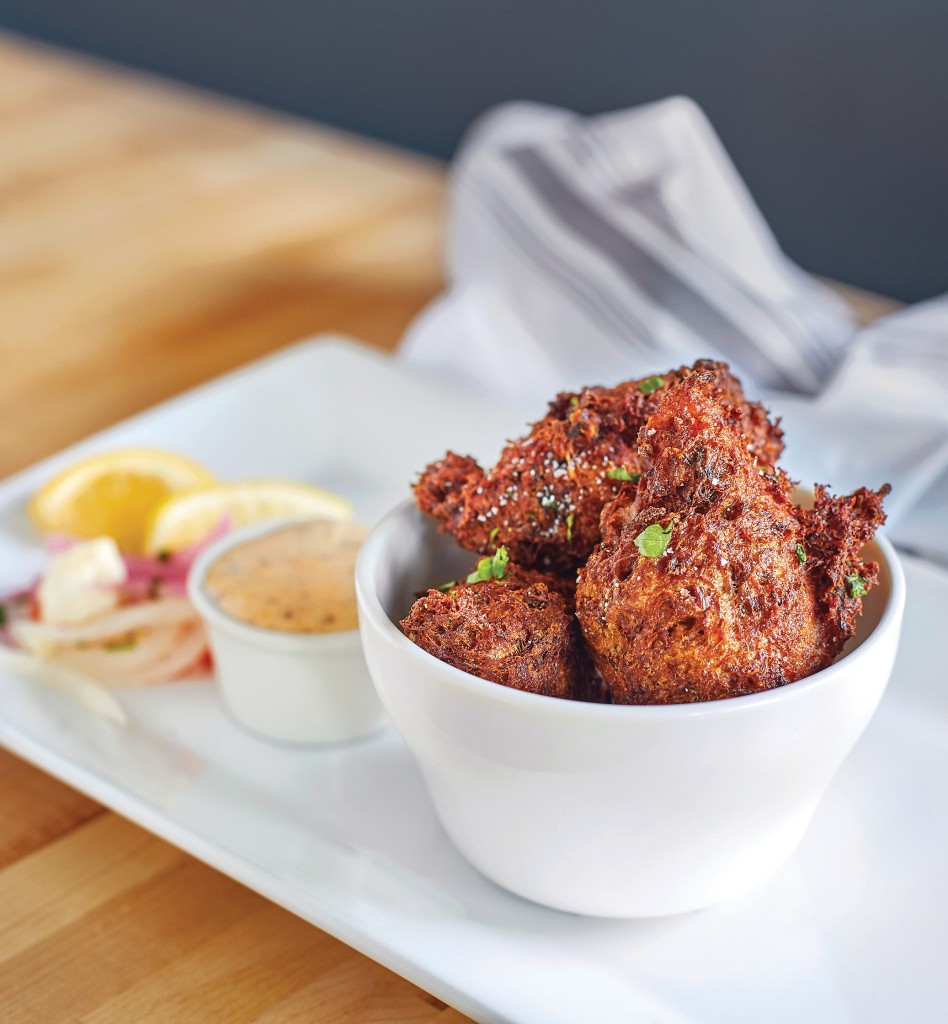 The menu pulls from an assortment of inspirations to build a collection that feels familiar but still intriguing. There are plenty of greens, but the most appealing small plates come deep-fried. Smoked fish beignets ($13) manifest the camaraderie of an Irish bar, sometimes stuffed with bluefish, or occasionally mackerel. (“The bluefish are still swimming upstream,” says Maive, a reassuring server. “We’ll greet them when they get back.”) A pair of arancini ($10) are served on a bed of densely flavored veal shank ragu that’s more stew than sauce. But the staple small plate is a bowl of seriously thick potato chips coated in blue cheese fondue, house chili crisp and crumbled bacon ($9). The crunchy potatoes themselves are the draw — enough to pull attention away from the nightly drafts to reconsider how uninspired other versions have been. 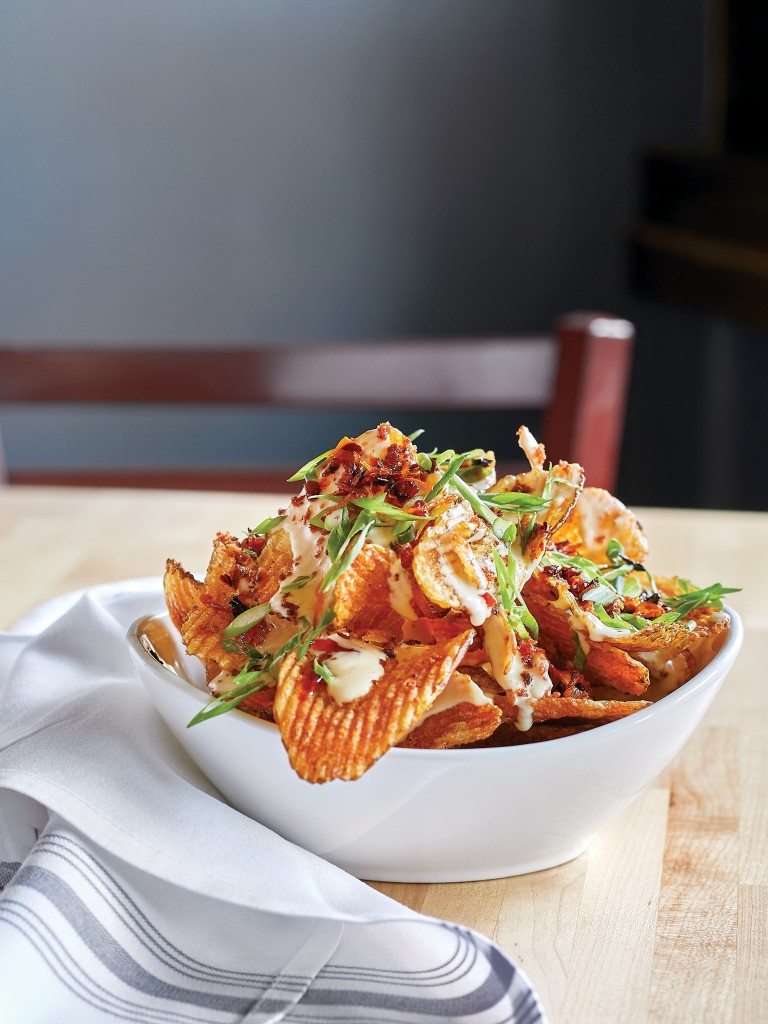 Larger plates are more nuanced and rooted in European technique — but they refuse to forfeit informality. Duck confit (version one of the namesake’s avatars) is the epitome of complex comfort food ($18): braised in its own fat for hours, there are few dishes that match its balance between casualness and abject opulence. Here, it’s punctuated with Dijon and parsnip or other seasonal produce — and it’s hard to argue with the decision to have everything else circle this fowl like the sun.

Perhaps the most defining characteristic of Bryson’s cooking is its refined earthiness. He plays with texture and sauces like a French chef, but he’s determined to elevate humble ingredients into the spotlight. In its second appearance, roasted duck breast ($32) pairs with farro and kale but the real star is its fruit jus. History has paired duck with anything and everything piquant and dramatic: blackberries, apricots, cherries and rhubarb are easy matches. But Bryson’s golden raisin sauce is so mellow and sweet that it complements the duck’s gaminess rather than contrasts it. 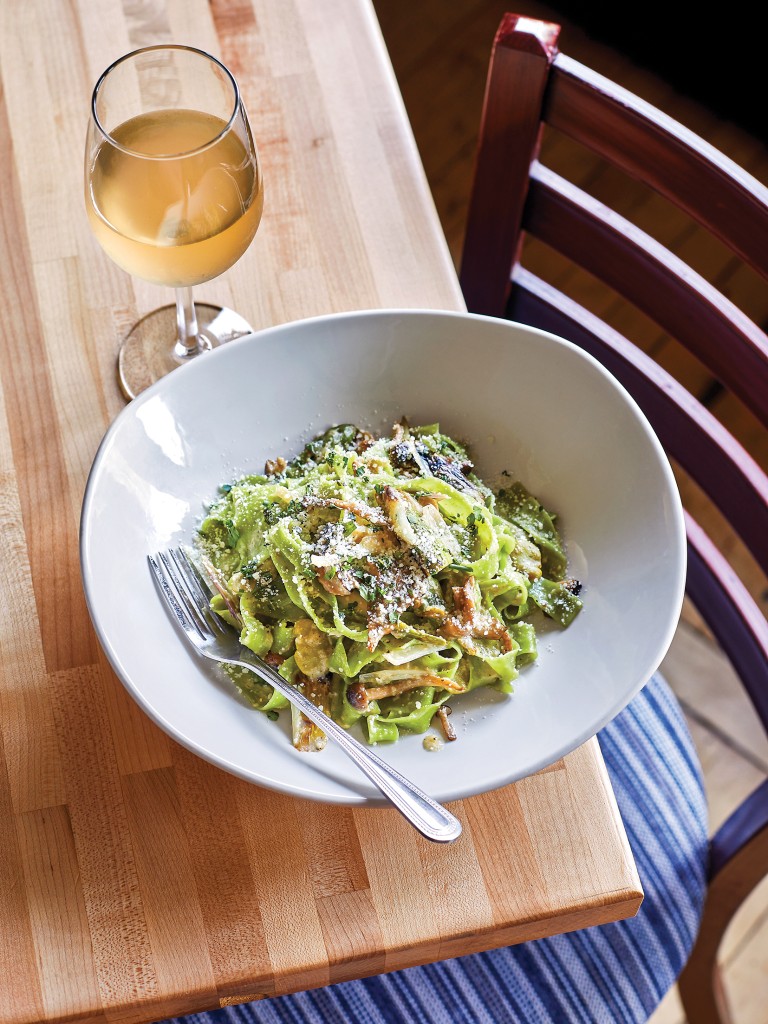 Of course, the menu deviates from duck often — as with a roasted pork loin and grits dish ($29) that surprises with a Marsala reduction made from a simmering shank. And yes, bits of braised meat show up in the sauce for a veritable dance-off between various parts of the pig. There’s a nod to the American South but, like most plates, it straddles at least two worlds. (Oh — and if you forgot you were in a culinary kumbaya moment, just wait for the guy at the next table to throw up his hands touchdown style and shout, “Tommy wins the night by ordering the pork!”)

But most often, diners gravitate to the housemade pastas ($24) which could be eaten plain like a slice of buttered bread, but which carry carbonara and a walnut pesto well. The restaurant’s final iteration of duck comes in its Bolognese, stewed and steeped in wine — and capable of winning over even a traditionalist.

As to whether Duck Press is ever driven to dramatics, that usually comes in drink form or dessert. Cocktails present in vibrant colors, syrups suspended on the surface of a double Old-Fashioned and liquors mixed with everything from blood orange to salted caramel to maple syrup. Here is where things veer toward an explosion of rainbow hues, and desserts are not far behind in this parade. Many ice cream flavors ($4-$7) are loaded with booze — bourbon, stout and rum — but they’re tempered by pyramids of chocolate mousse and cinnamon sugar doughnuts ($10). The occasional kid might show up for a scoop of cinnamon toast crunch ice cream but, largely, evenings at Duck Press are for the adults in town who have claimed it for their own. Let the junior crowd reserve a table for Sunday brunch because this small corner of the state needs a place to celebrate a close-contact summer and they’ve clearly found their space. 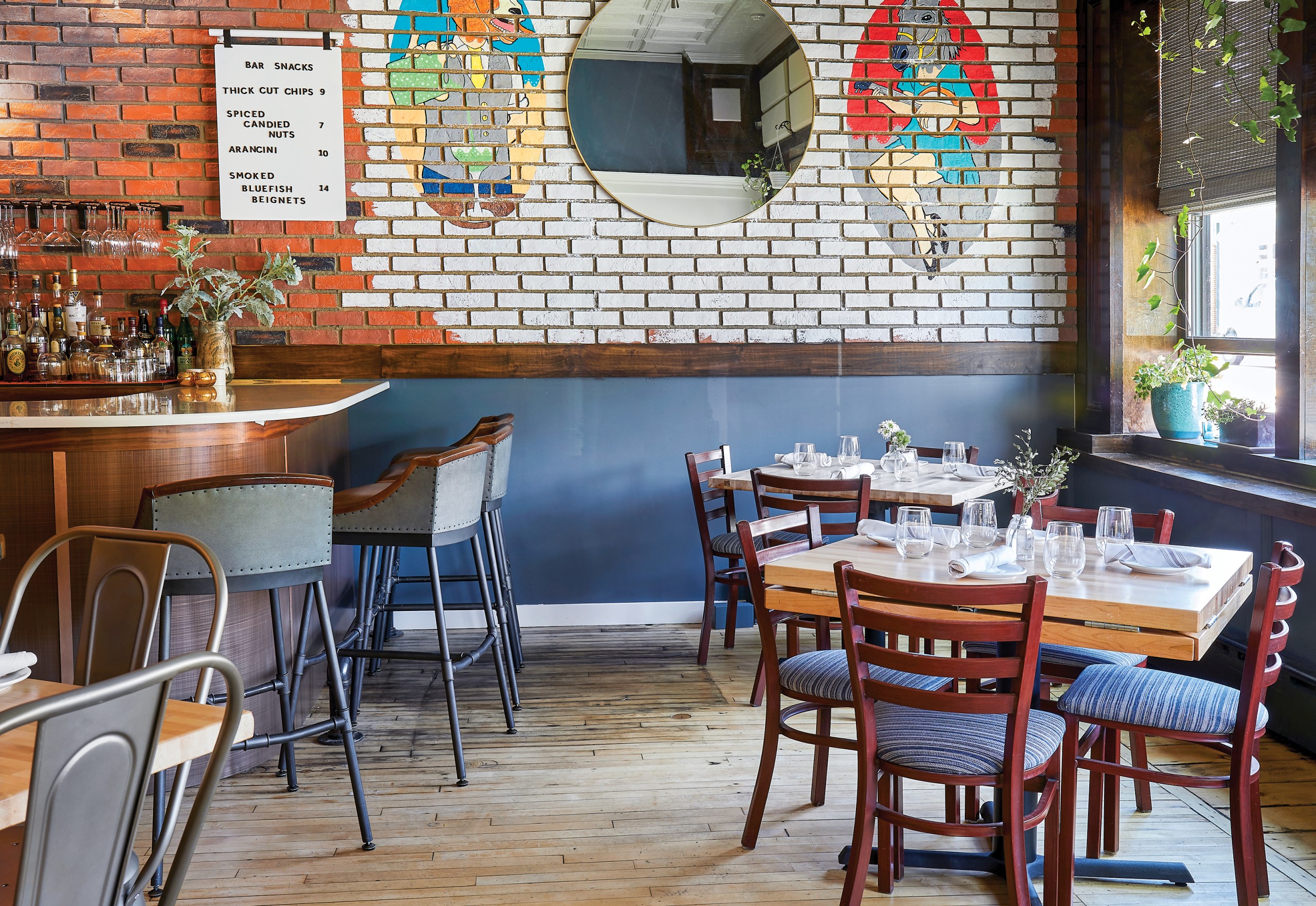 Vibe: The place where everybody knows your name.

Must Get:
Chips with blue cheese, duck in all forms, housemade pasta.